A Walk In The Park!!

One of the neatest things about traveling is you get to experience a little bit of each town.  That's what we did yesterday when we attended the local Farmers Market on Church Street in Burlington.  This is one of the biggest I've seen and well worth the three trips around the area trying to find a parking space.  Luckily a nice gentleman came by and offered up his spot.  Everything is blooming beautifully in spite of the rain and this big bumble bee was hard at work!! 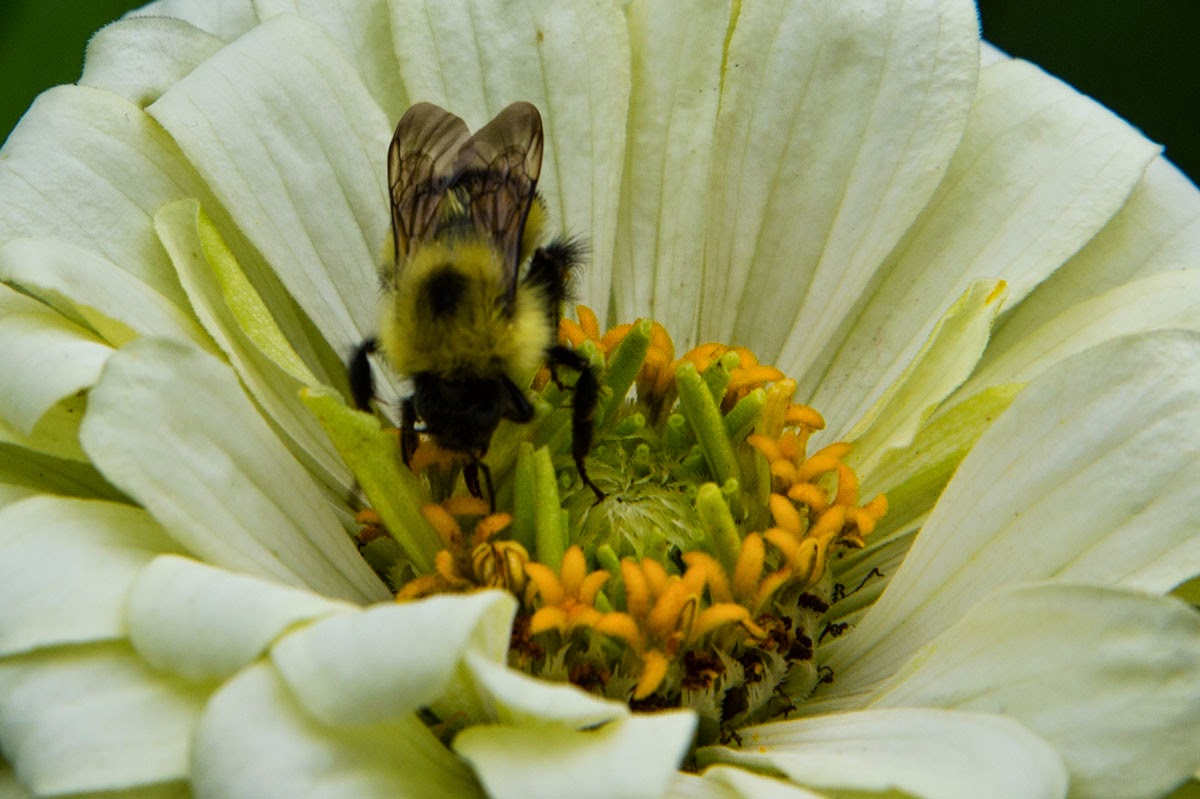 The Farmers Market has everything from fruits and vegetables to crafts with the added bonus of LOTS of prepared food you might not taste otherwise.  From meat pies (delicious) to sausages (Tom inhaled his) to Greek and East Indian dishes, it looked like everyone sold out before noon!! 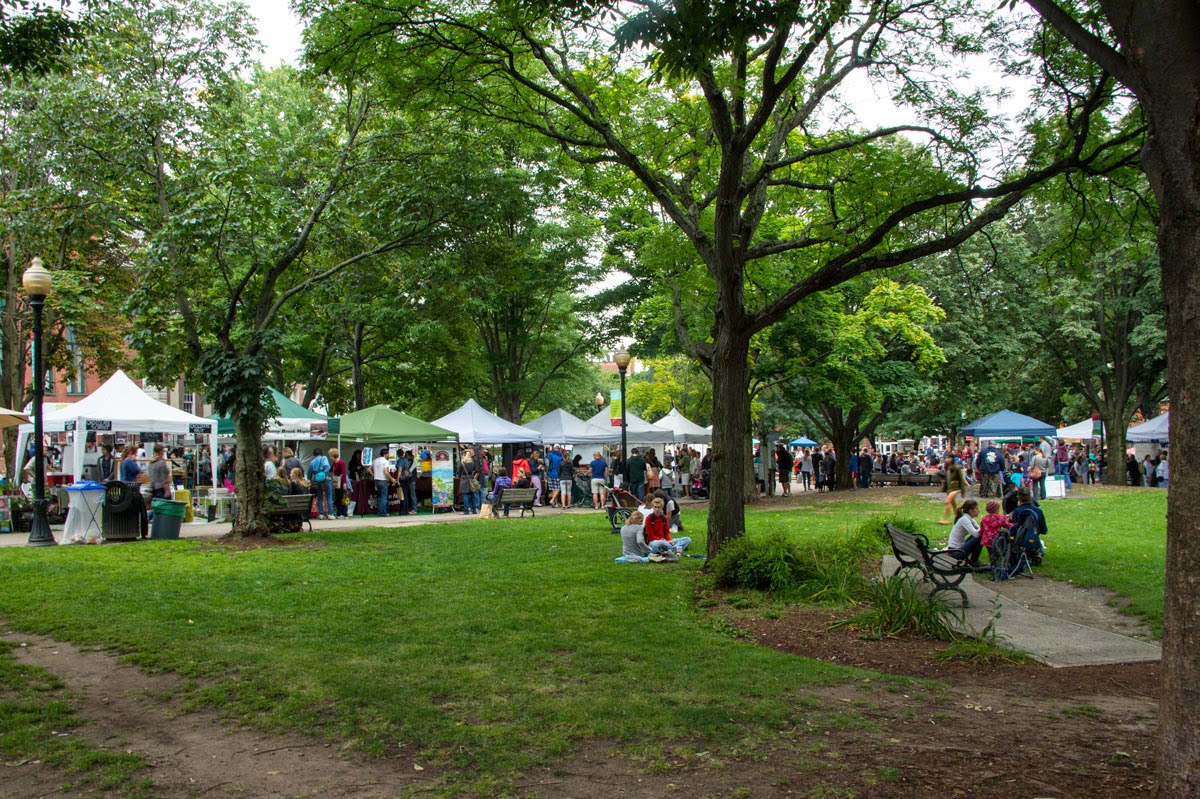 There were also some vegetable stands with the most beautiful tomatoes I've seen on this trip. 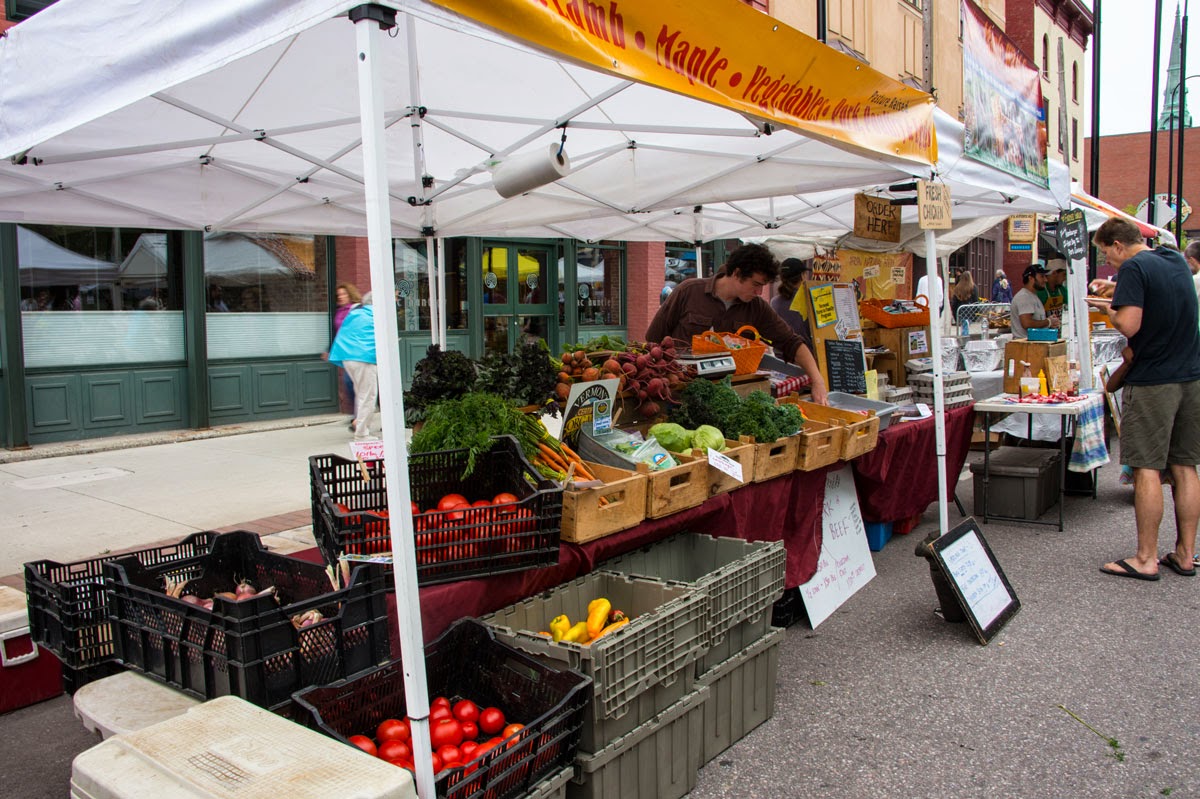 I have to say this reminded me terribly of Berkeley ... from the people to the clothing to the peace and love advertisements.  One very nice elderly lady was even giving away free hugs.  Yup ... right there on her "free hug rug"!! 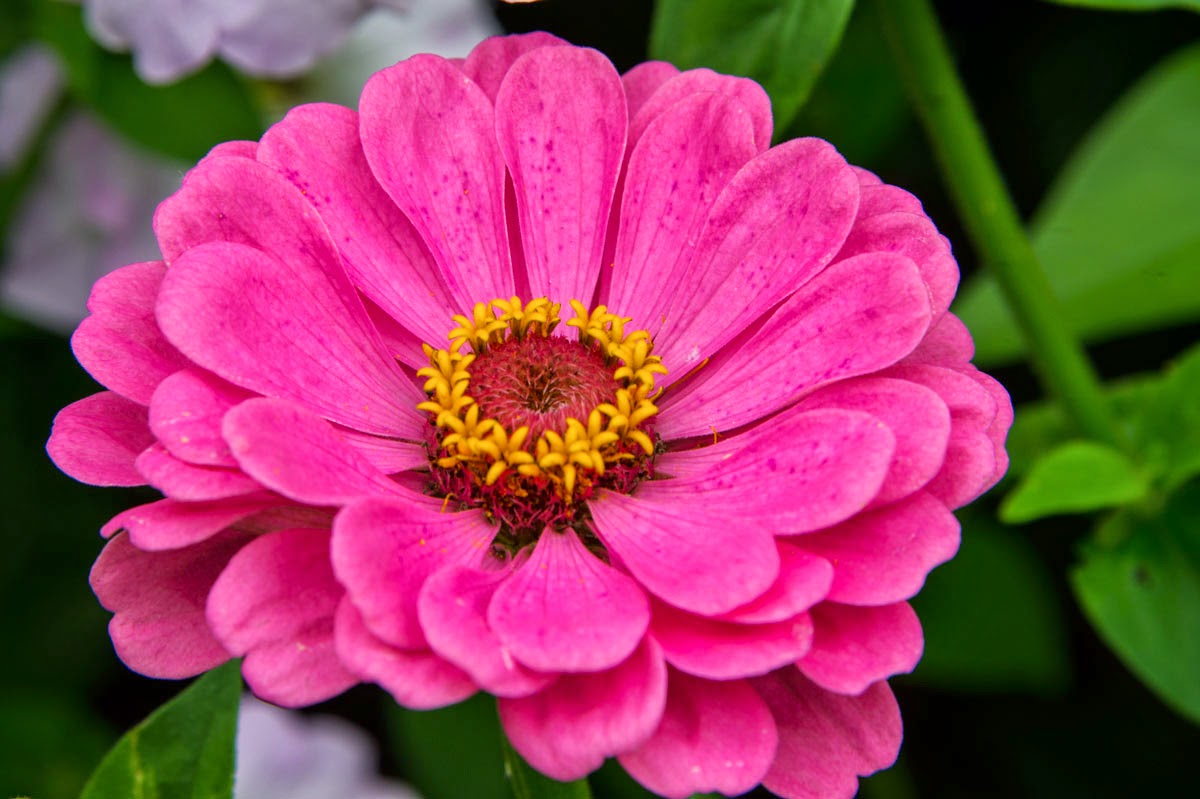 Around the corner on Church Street, which is closed off for several blocks, were street performers next to patio dining at every restaurant door.  This guy played his digieridoo while drumming on the box and moving his feet for the bells and the marionette puppets.  Pretty impressive and with a deer headdress to boot!! 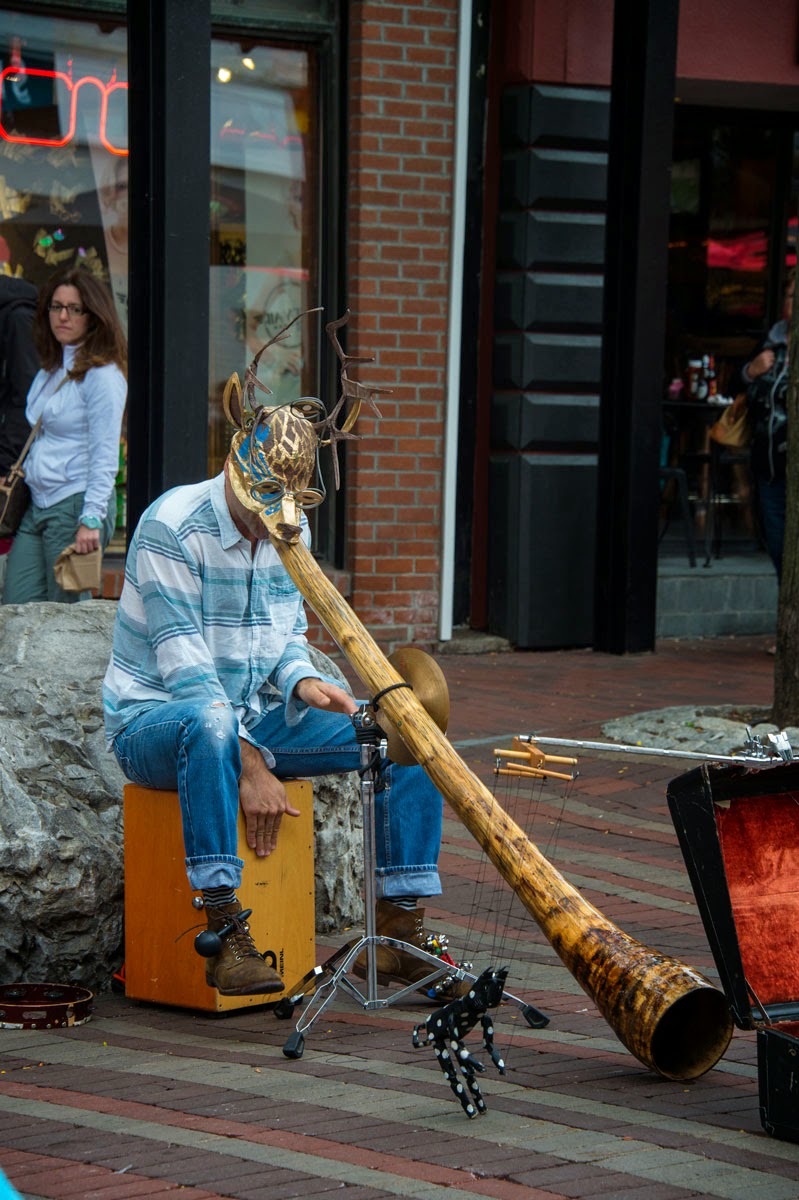 When I got around to the other side I noticed he even had a cymbal and a microphone strapped to his boot!! 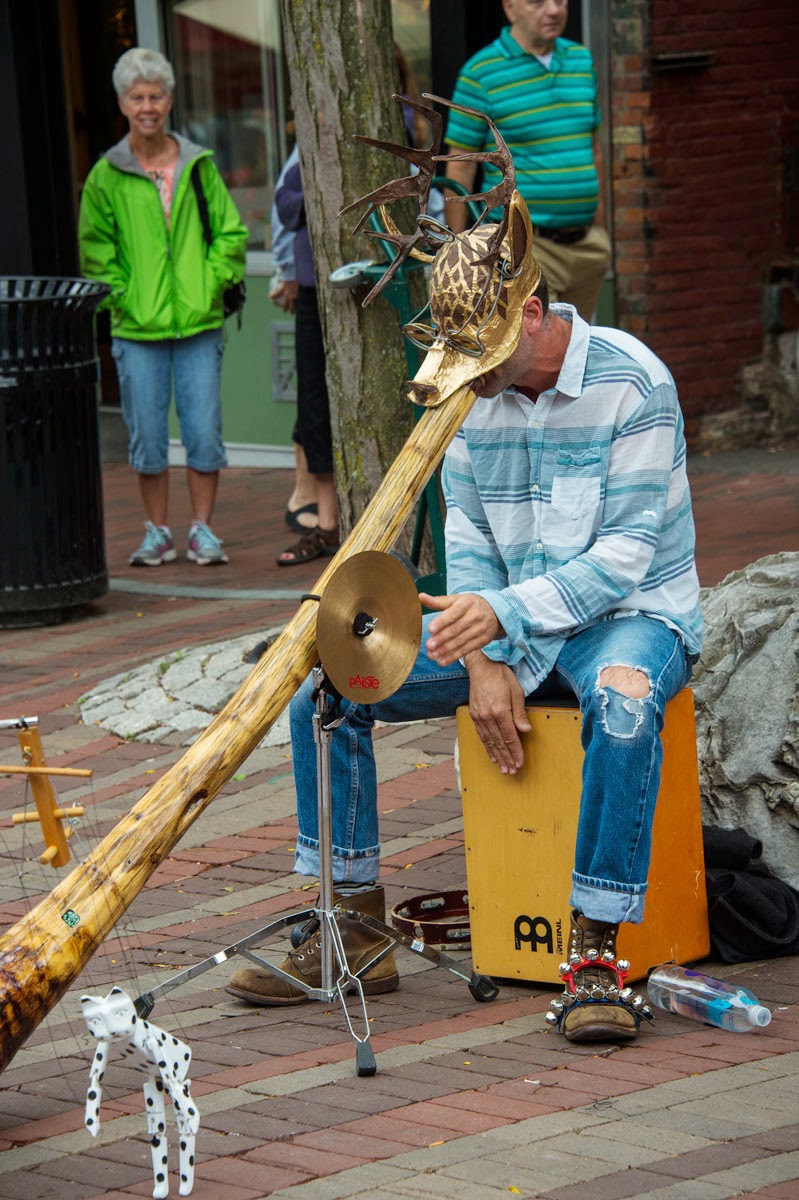 He definitely got the kids moving ... as soon as this little girl in pink got going, all the other kids joined in.  Too fun to watch!! 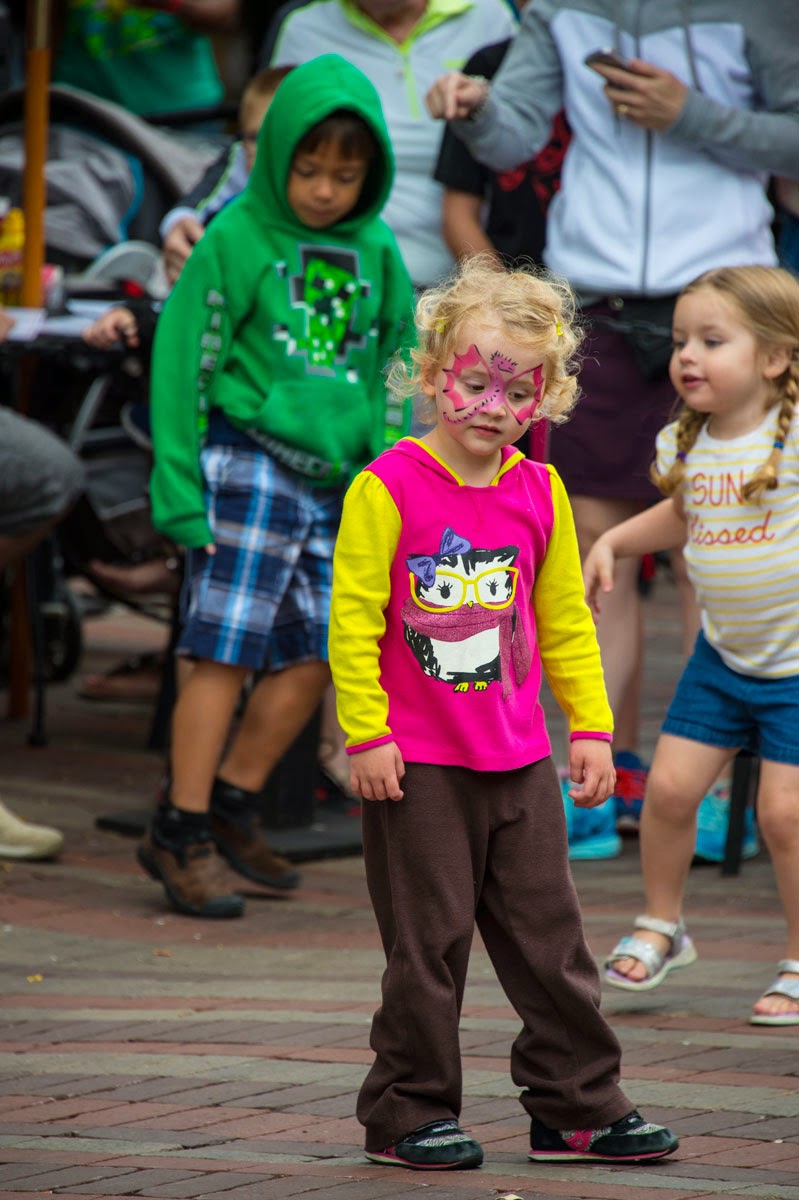 The flowers for sale were just gorgeous ... many I have never seen before!! 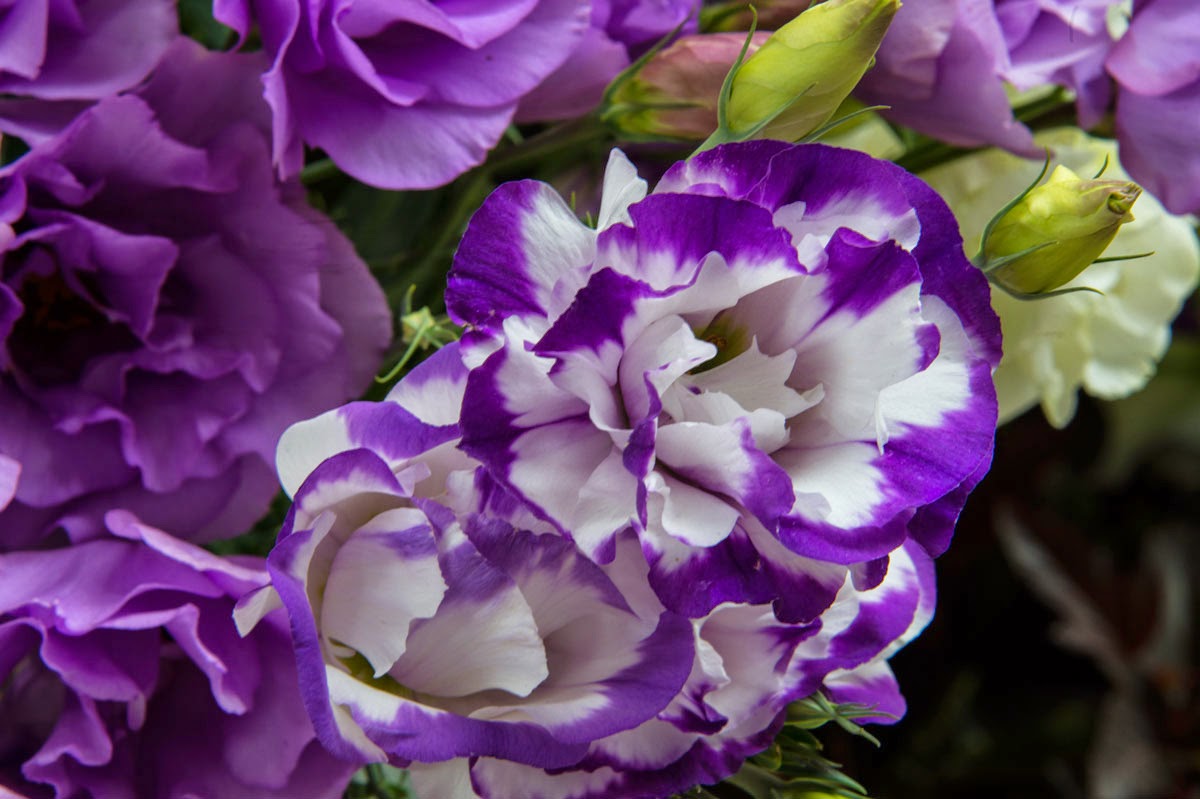 As we walked up the street, this alley came into view.  The entire alley from one end to the other is painted with celebrities ... Elvis is even here!!  This is so realistic that you can stand in the picture and take YOUR picture ... making it look like you are painted on the wall!! 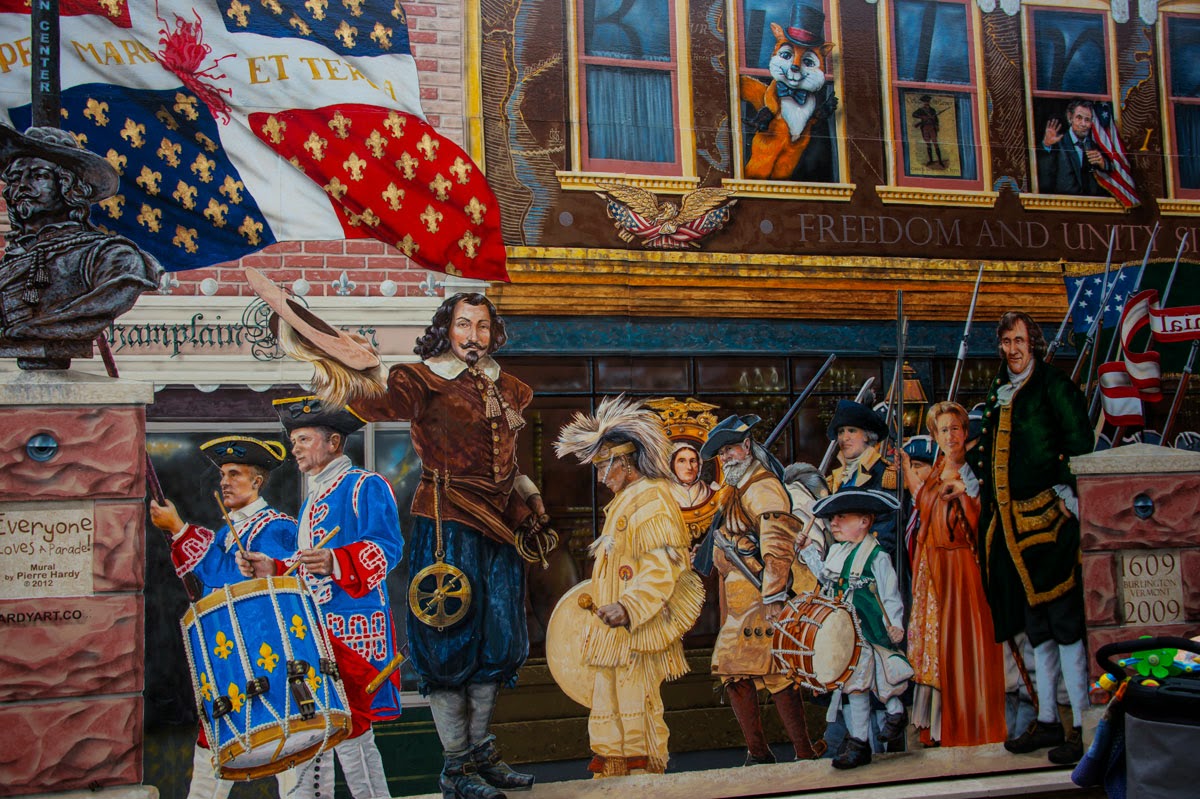 We stopped in many of the stores along the way, but this one took the cake.  Here, you can taste every single type of balsamic vinegar and oils from large containers on the top shelf.  I've never seen so many flavored balsamics and oils ... and they were amazing!!  The best part is they sell their products in small bottles or large ... so I don't have to end up with a bottle in my fridge for two years!! 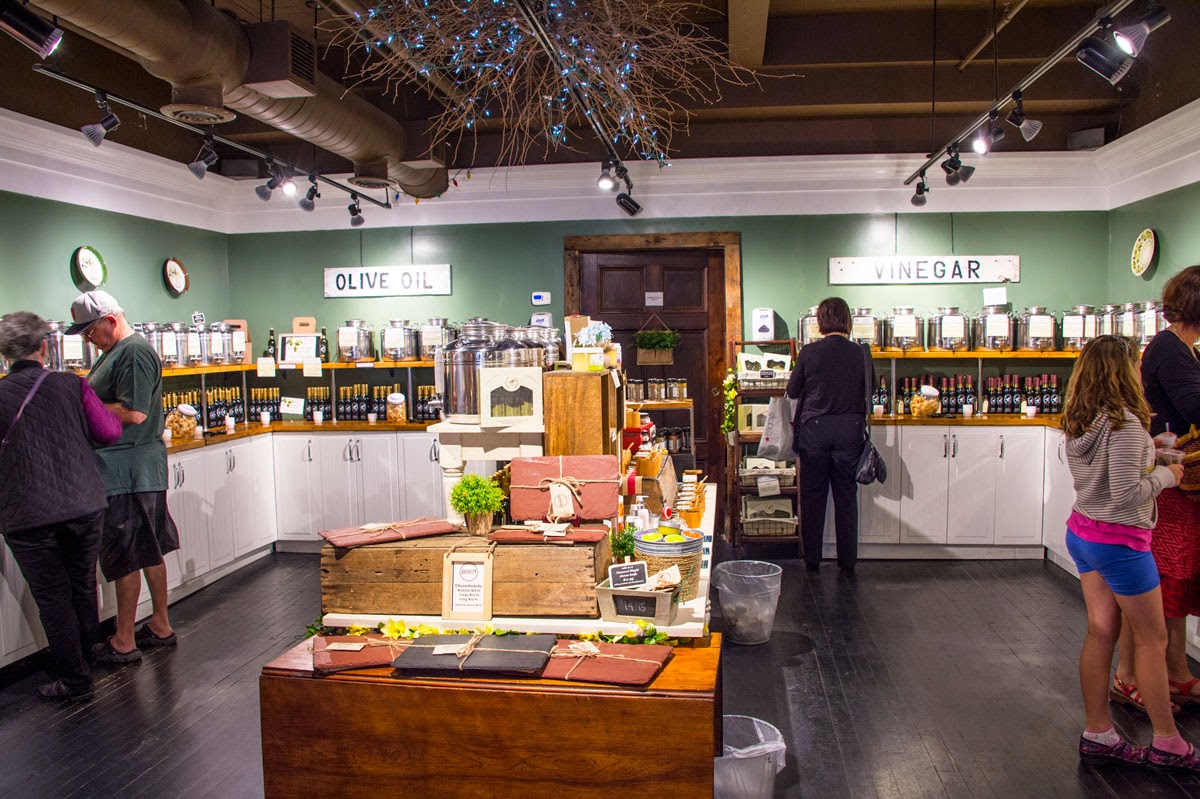 More street performers ... it took this guy a little while to get the crowd involved, but eventually he did when he juggled some flaming sticks while standing on four chairs stacked up. 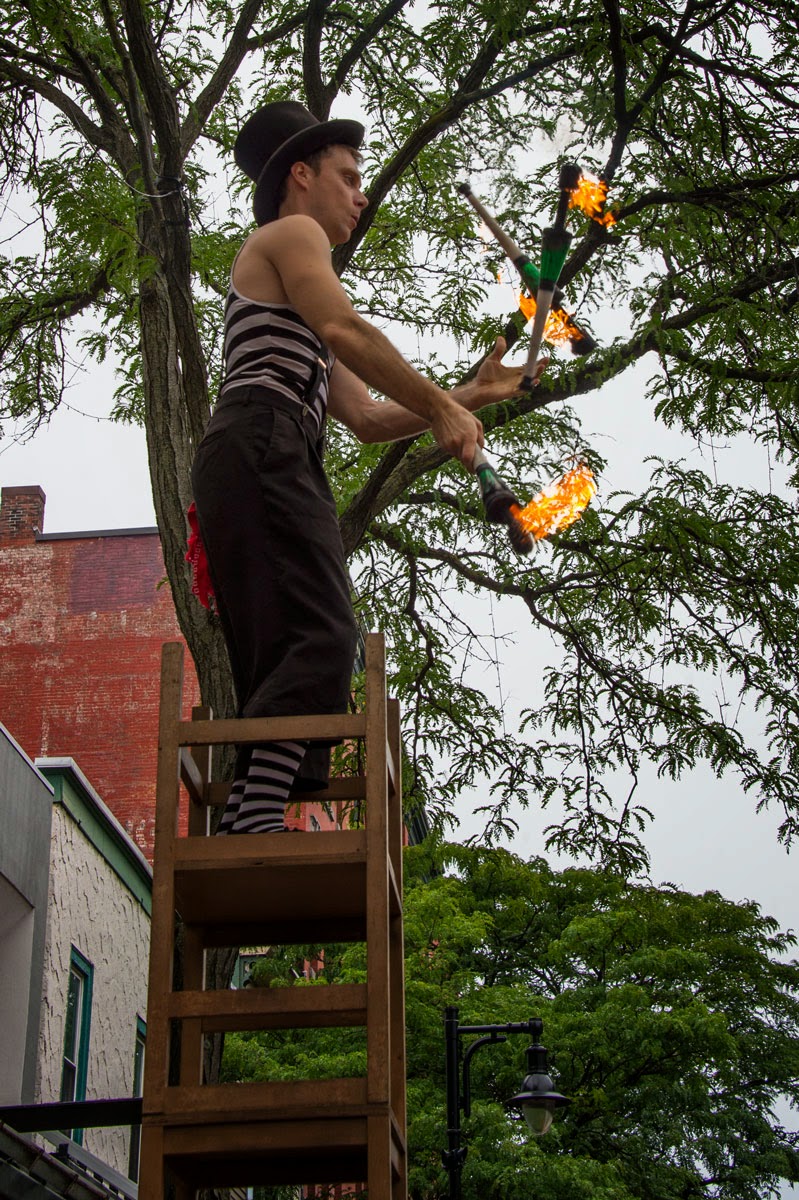 He finally did a handstand on top of a fifth chair .... 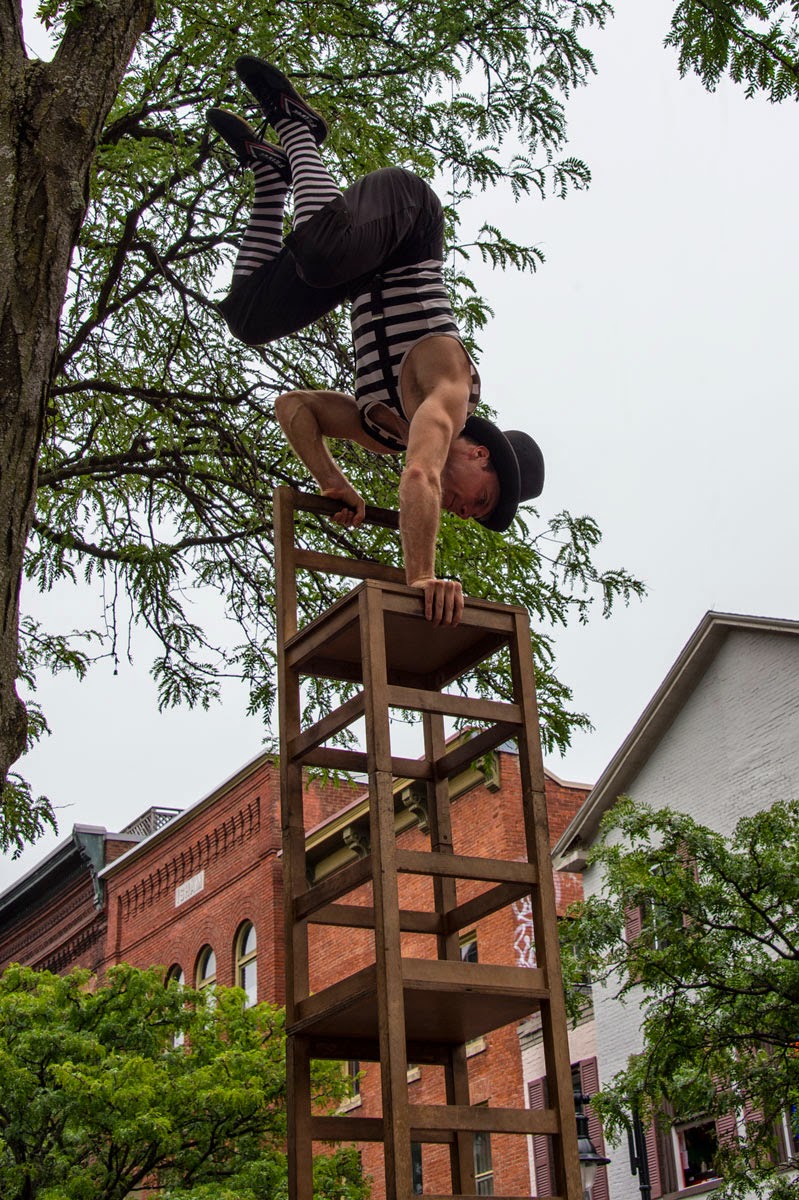 which got a round of applause ... at which time he requested donations.  As Barbara said ... what does YOUR son do???  I'm hoping he's a college student.  The summers aren't long enough around here to make a living at this!! 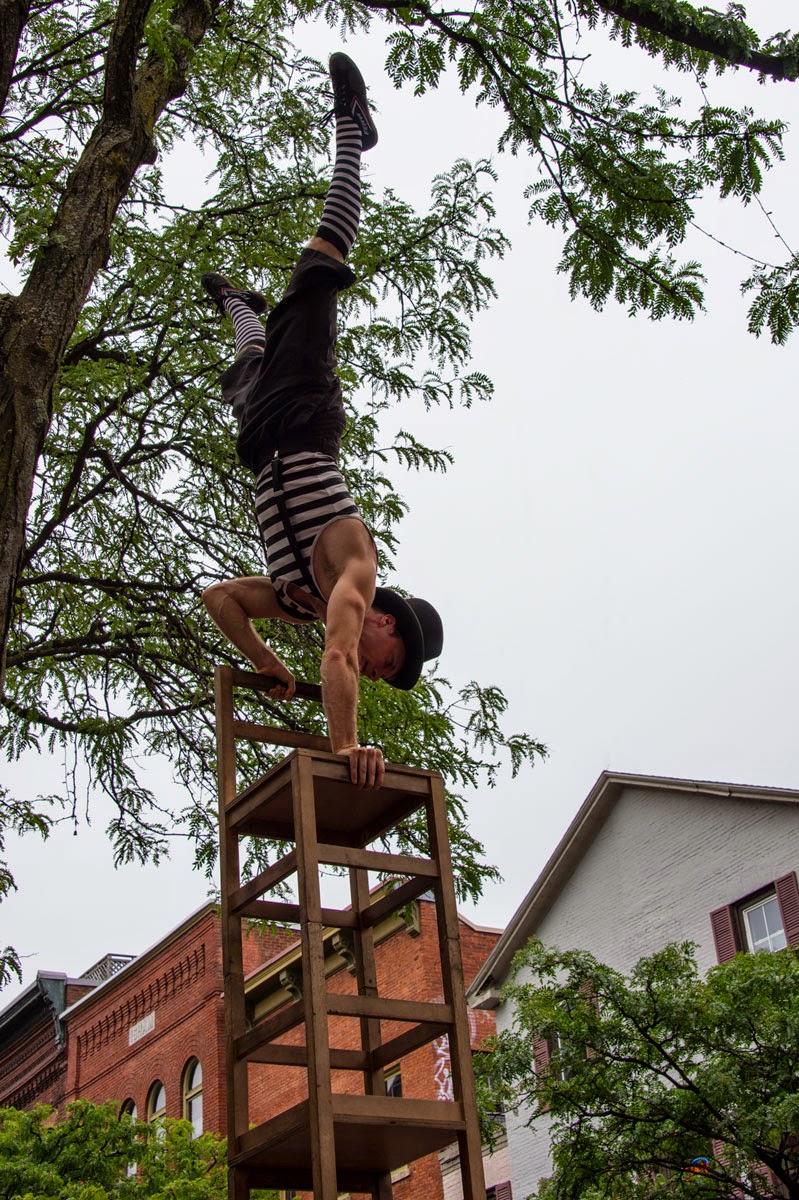 If you really look as you walk the streets, many of the buildings have plaques describing their history and what businesses occupied it previously.  City Hall is at the end of the block, with some wonderful flower gardens.  Everywhere you go here, there are flowers in bloom making me wish I had a green thumb, but then I don't plan on being home much in the summer.  Maybe when I'm older and in a rocking chair on the porch!! 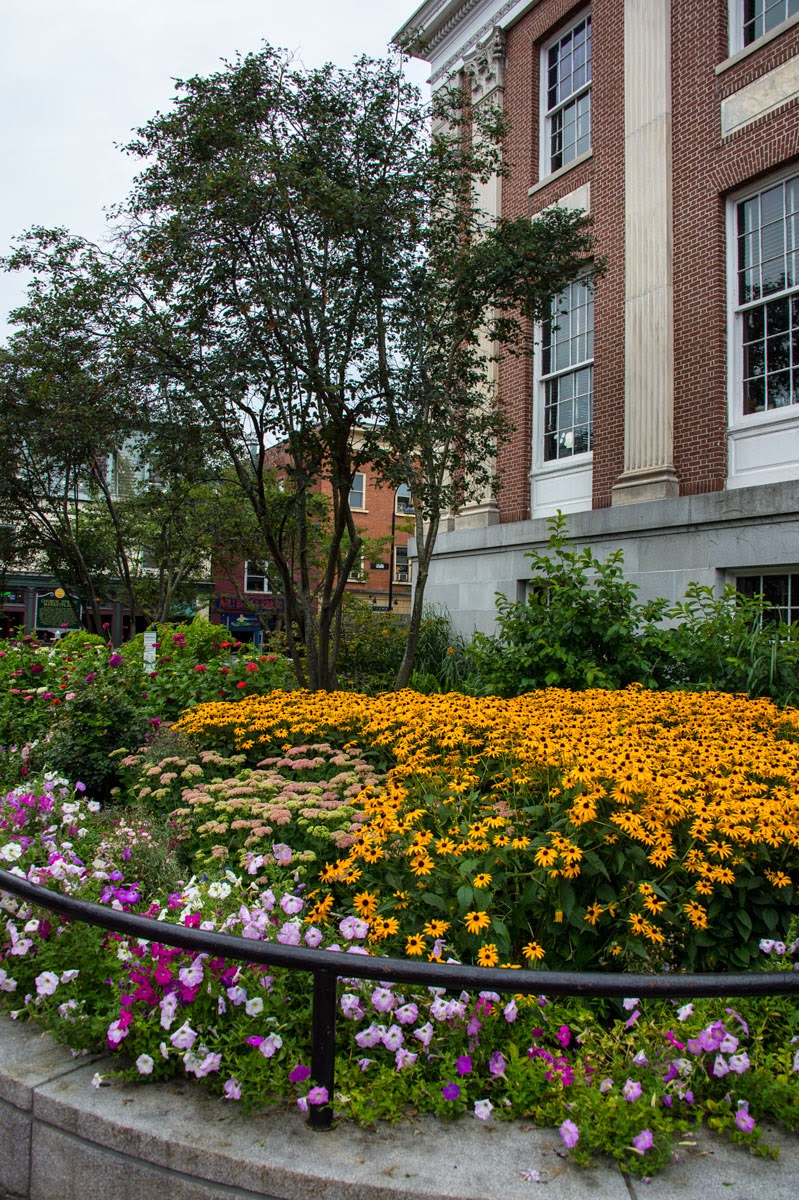 There are so many restaurants in this central city area that we couldn't decide which one to have dinner at.  Mexican, German, Chinese, Italian, American .... but when we went by this place, Barbara decided to have her birthday dinner in Germany to celebrate her grandfather.  Das Bierhaus entrance is down an alley to a side door and upstairs!! 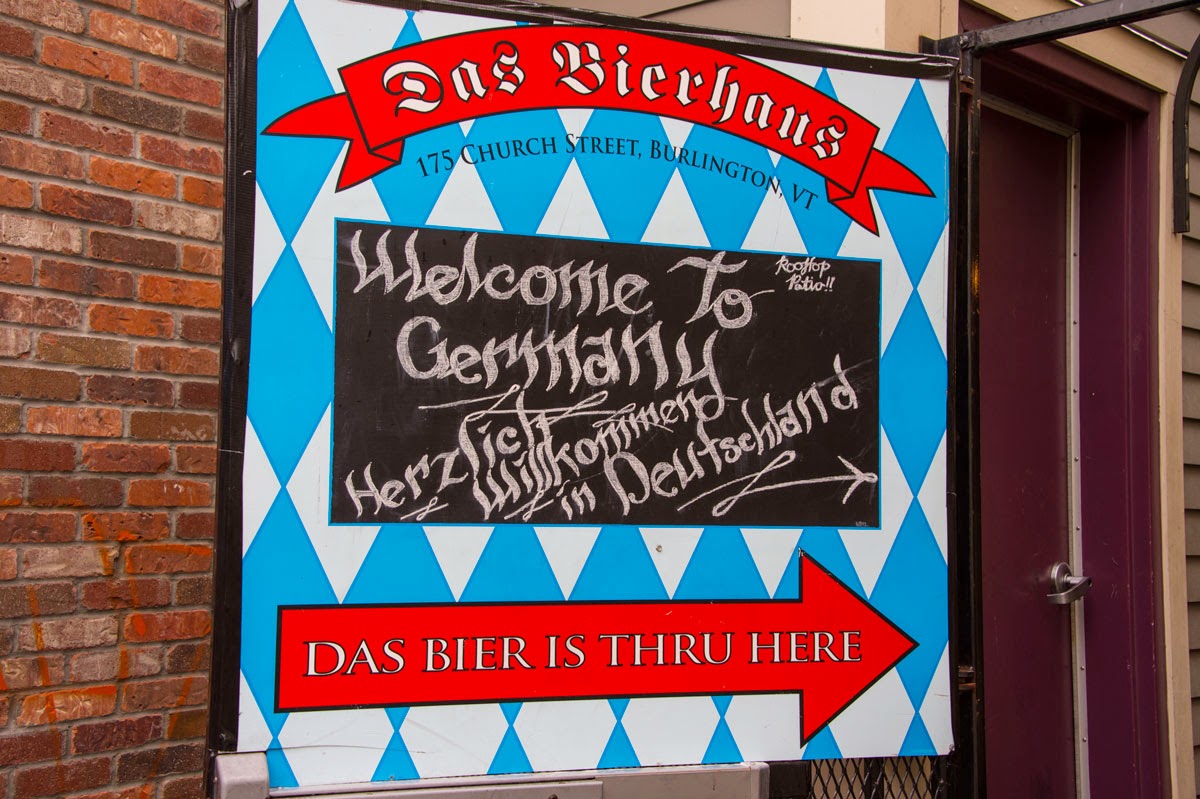 At the table next to us sat a group of young people from New York.  We thoroughly checked out what they ordered before I got Swiss Mac N Cheese .... I finished every bite!! 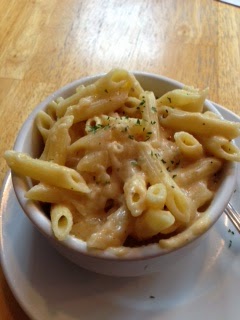 Barbara had the German potato salad, as did Tom with his schnitzel, topped with an egg and a beer with an unpronounceable name!! 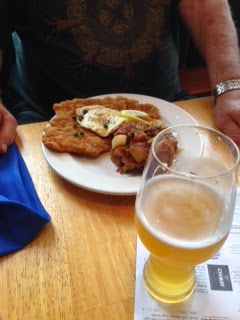 Our waitress was awesome and she happily joined in the birthday picture!!  She reminded us all of granddaughter Julie!! 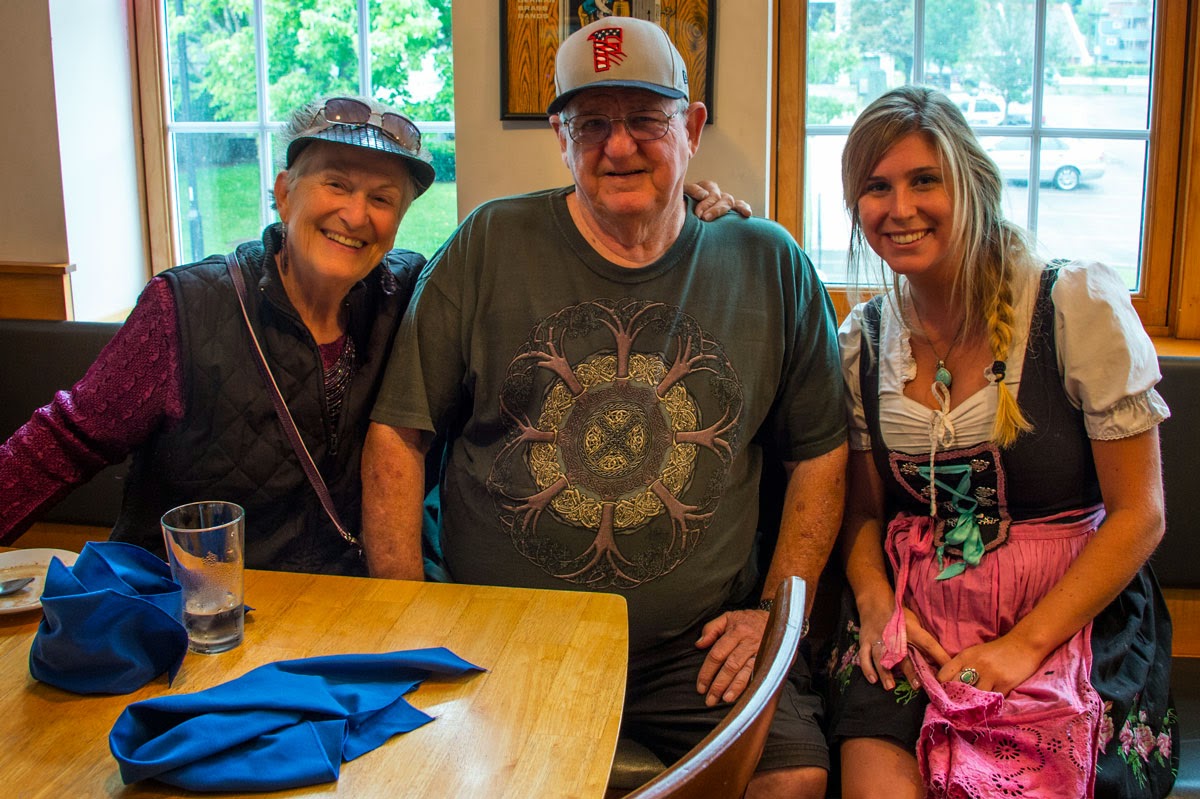 There are so many things to see and do in Vermont ... we have hardly scratched the surface.  Before we leave however, we plan to check out Ethan Allen's home, Ben and Jerry's Ice Cream Factory (you KNEW we wouldn't miss that one), a Granite Factory and one of the most interesting cemeteries in the area.  Now THAT's diversification vacationing!!

Posted by Nancy Kissack at 5:06 AM