Early in the morning, I ran out for gas and cash, and of course to check out the local Fiber Arts Gallery!!  There was nothing really special, and upon my return, Barbara suggested we take a Taste Test ride ... for the best ice cream in Portland!!  Who could turn THAT down??    I know we are supposed to be testing Bread Pudding, but it seems they don't have any on the East Coast, least when we ask, they always say no.  Old Portland was our destination, a few short miles from our rigs.

I've never seen so many stores on every single street!!  From leather to jewelry, toys to Christmas ornaments, it was all here.  Parking is at a premium, so we found a parking garage in the middle of the taste-test 5 block area for $8.00. 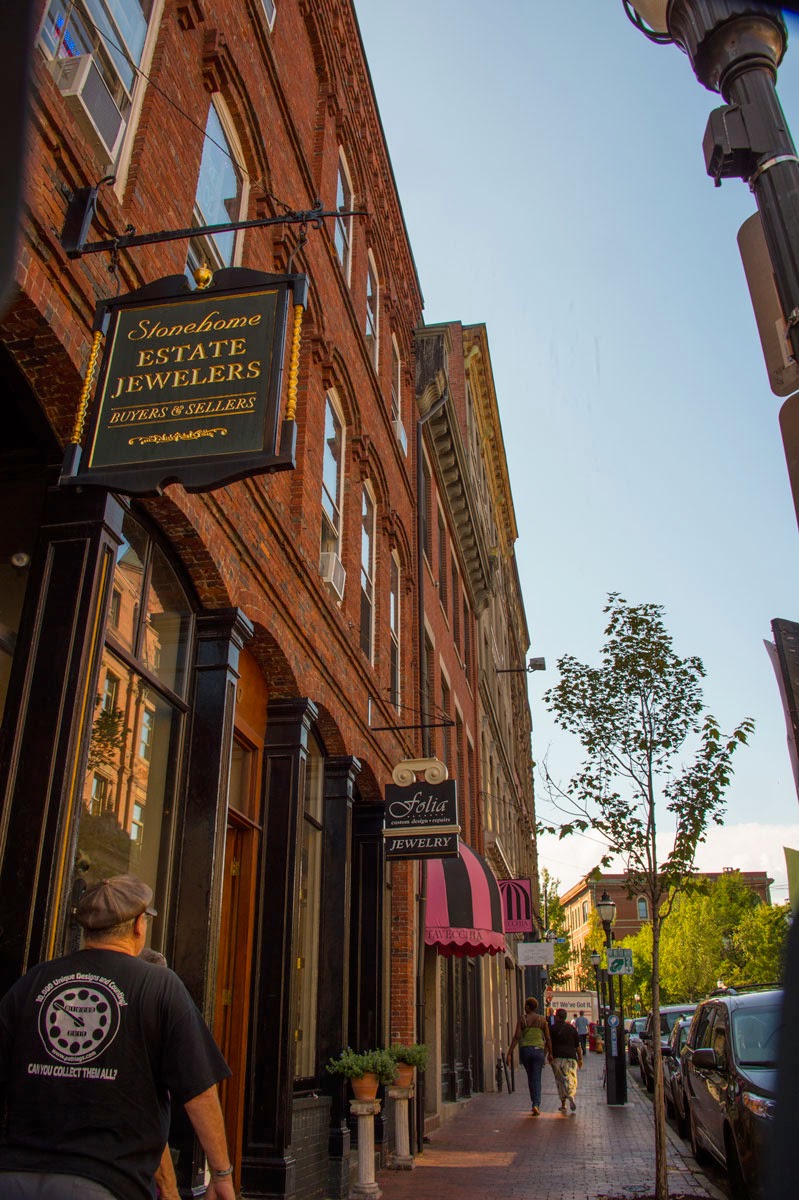 Many of the streets are still paved with original hand cut cobblestones.  Most of the sand in between has been washed away, probably by the torrential rains they have occasionally.  Barbara had FIVE shops on her list ... yes, 5 ice cream shops.  I'm not sure I can eat that many cones, but I'll try to force myself!!  The first was Mt. Desert Ice Cream, all hand made flavors.  The smallest cone was huge, and we had something called Dude.  It was like Bailey's and cream ... yummy!! 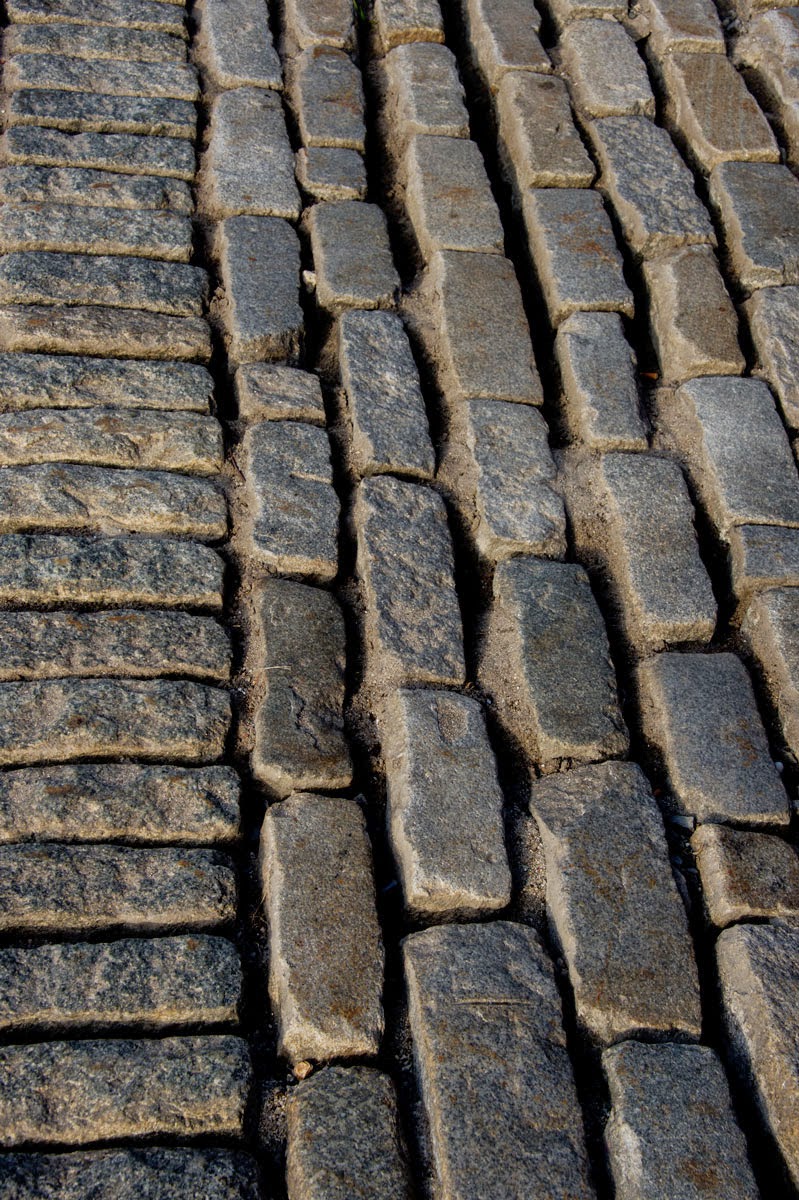 I forgot to catch a picture of the first place ... even BEFORE I had the boozy ice cream.  The second stop was Beal's, which was recommended by someone at the Elks bar. 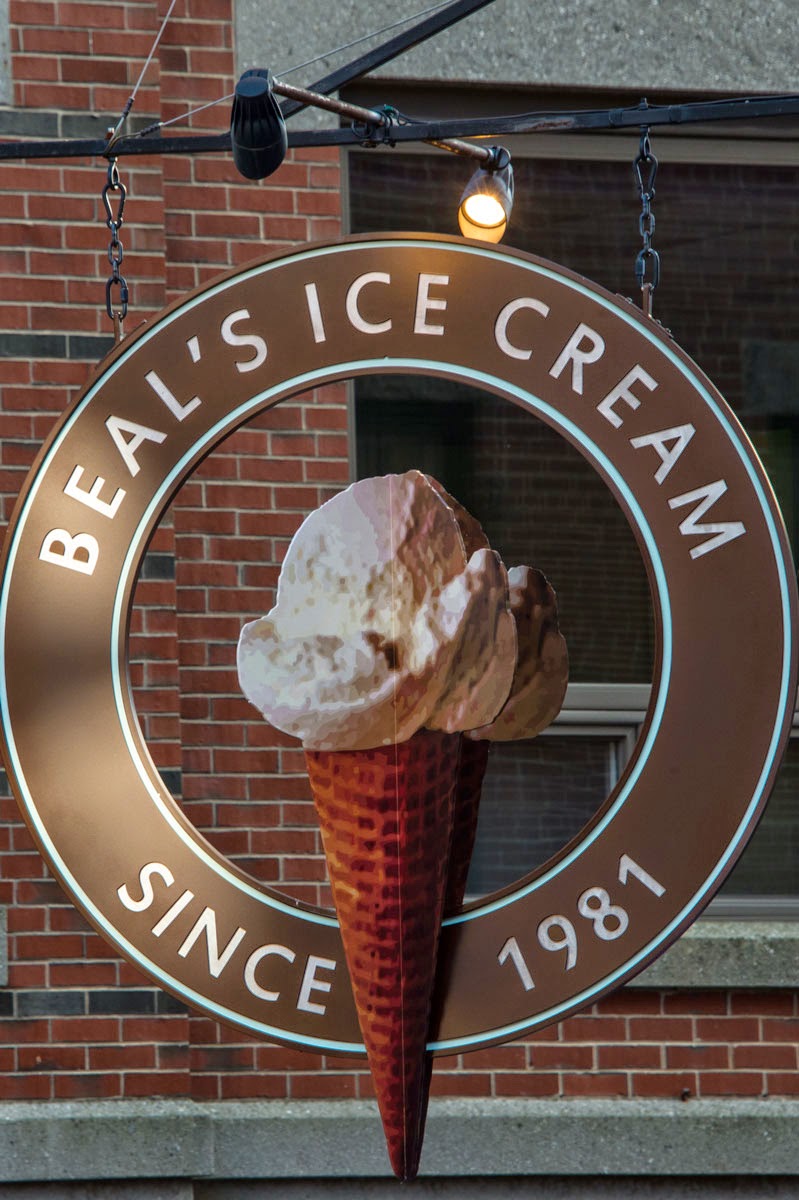 Turns out it was a good recommendation.  Although not as creamy as Mt. Desert, they had more "normal" flavors.  I wised up here and only ordered a kids serving, but it was still huge.  Looking back, I wish I had thought of that at the FIRST stop!! 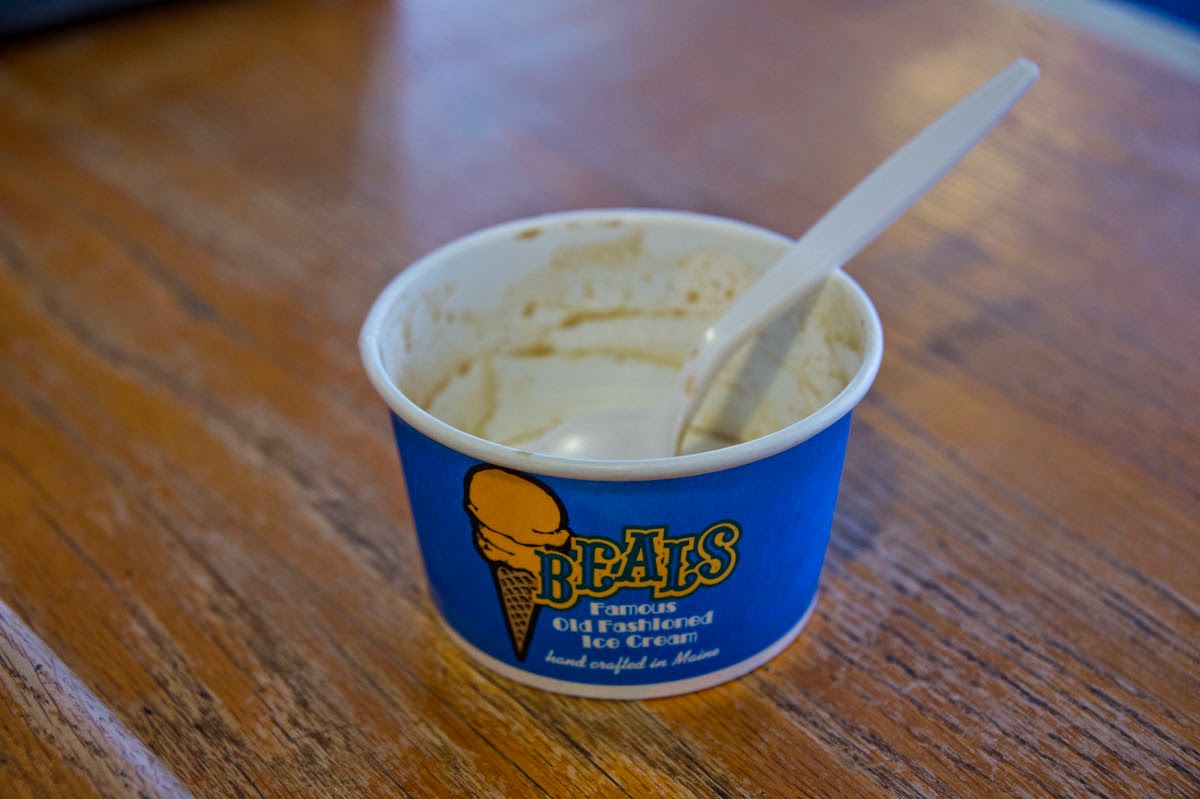 As we walked down toward the wharf, we checked out the geocaches close by, and came up with David Hasselhoff on Long Wharf.  I have no idea what he had to do with it, but the walk along the water while tour boats unloaded was beautiful. 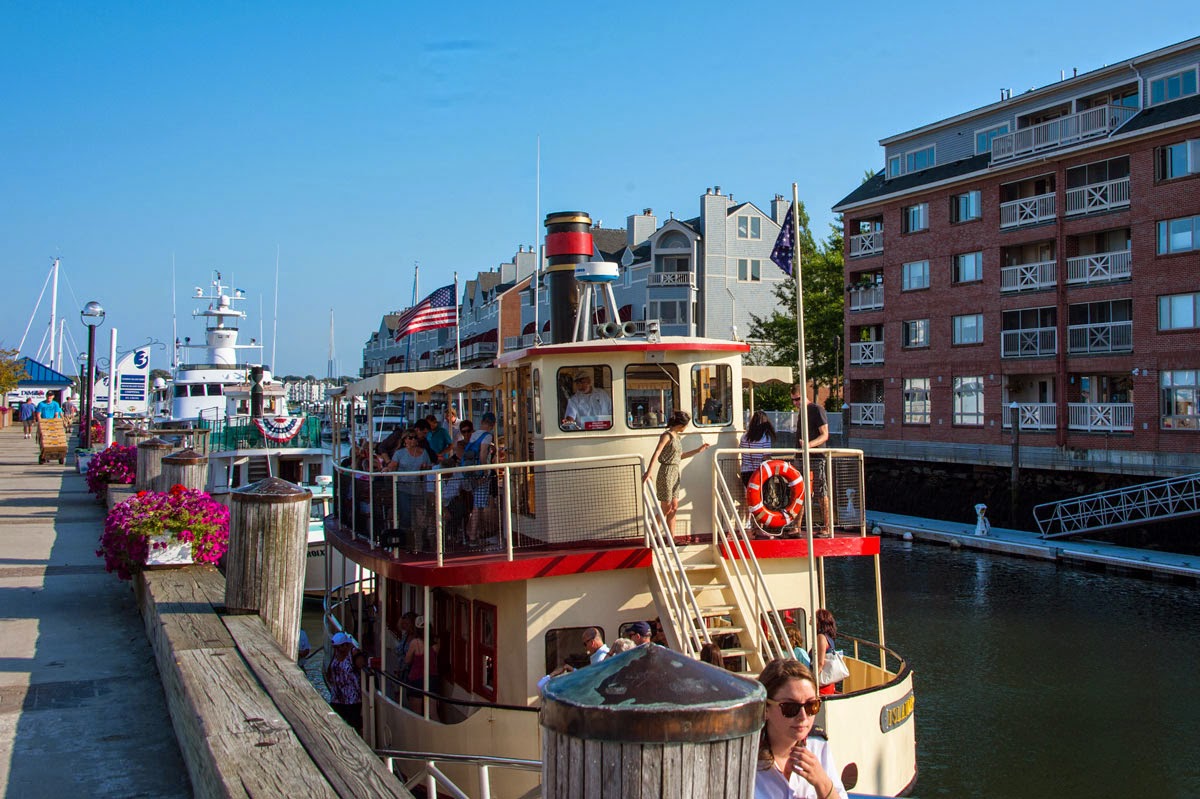 Then we came to the Berlin Wall Monument.  Really --  In Portland Maine??  This one I've never heard of.  I knew small pieces were around, but had no idea I would see this!!  Three large pieces of concrete maybe 5-7' tall.  VERY cool!!!  You never know what you might find while geocaching!! 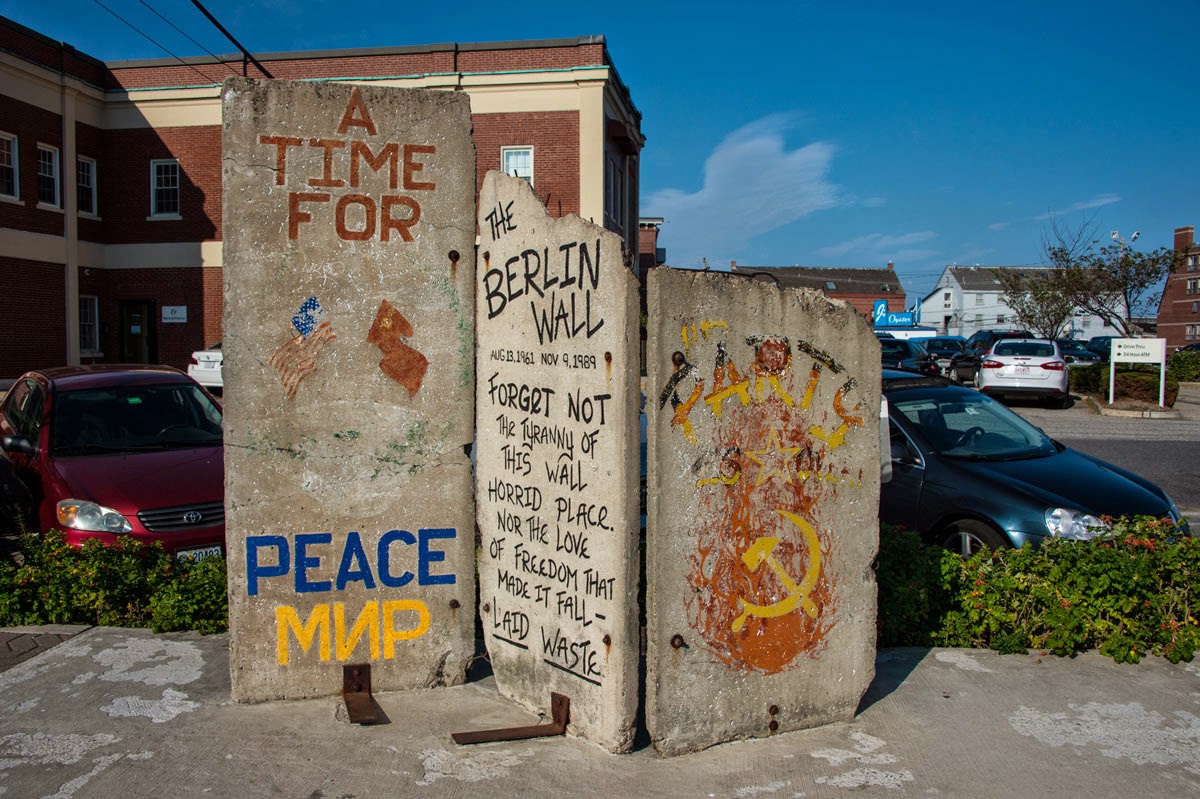 Even more interesting was the sign still attached to the back of the taller sections, stating "Frontier Area" ... "Passage Not Allowed" in three languages no less!!  I'm so glad this is a concrete wall that did NOT stand the test of time! 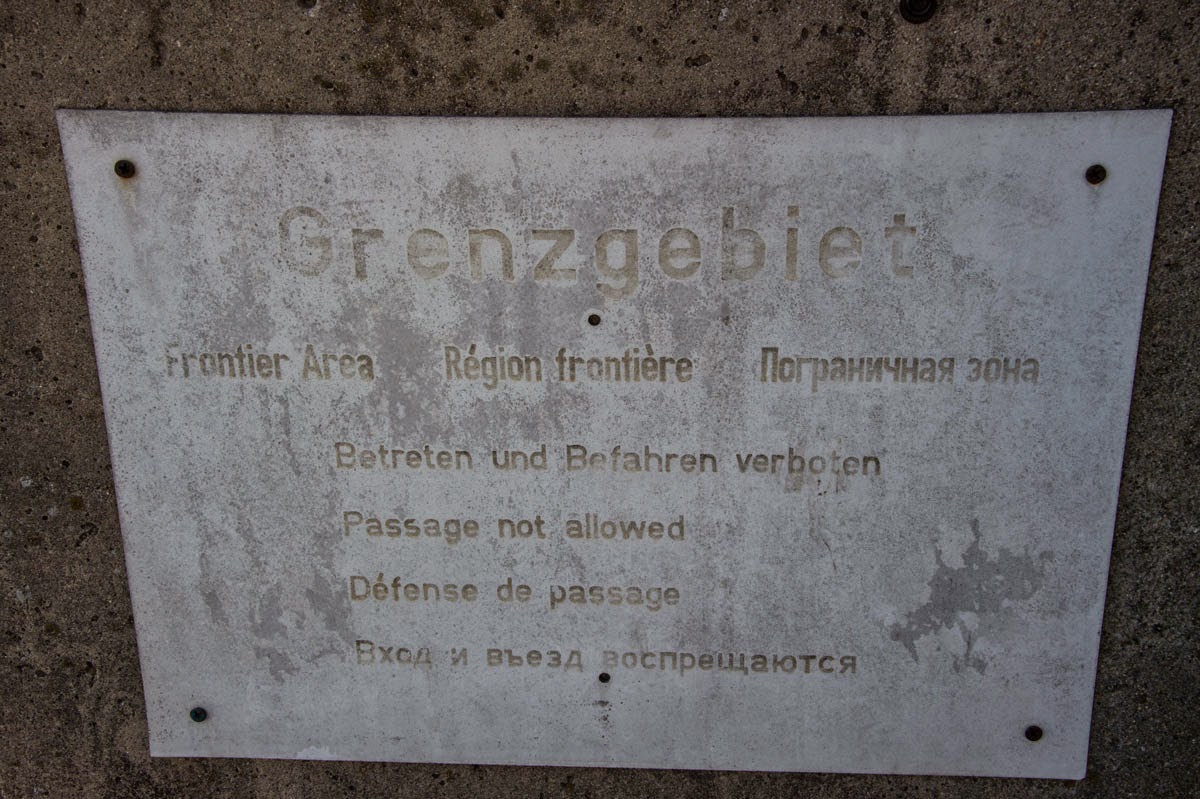 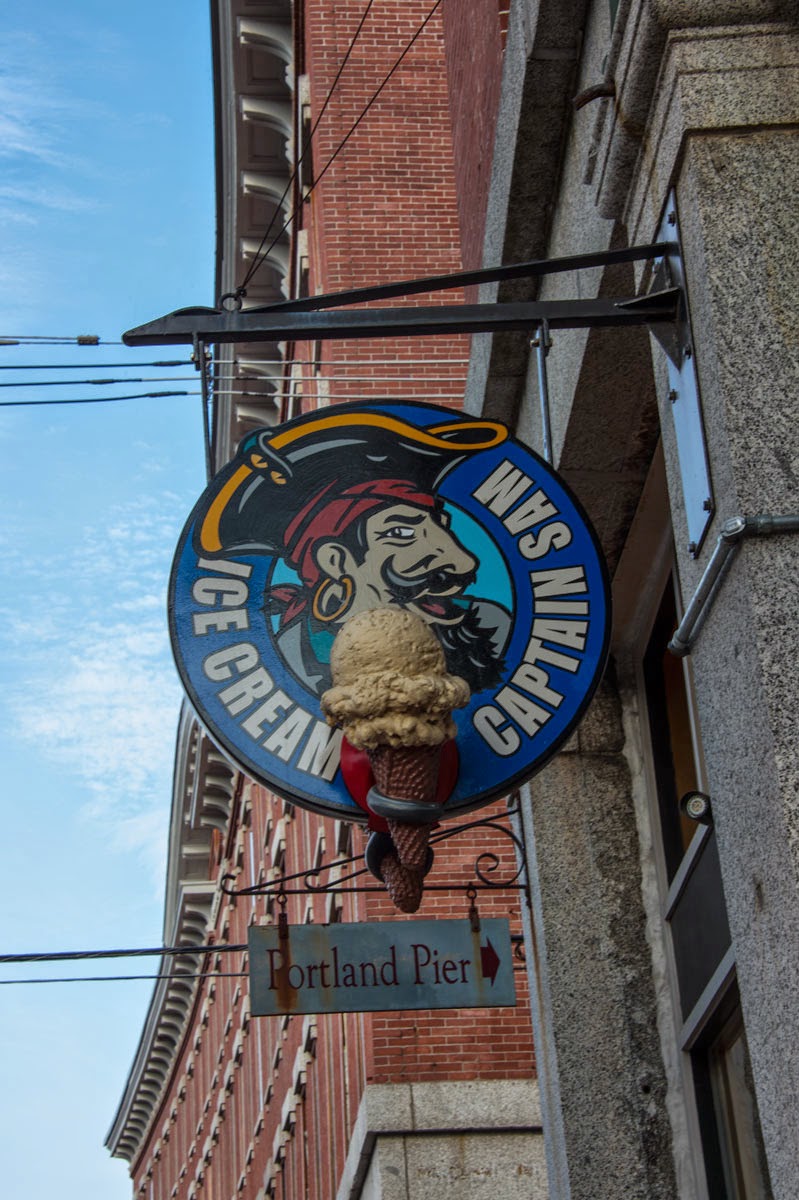 I really wasn't feeling the "testing" idea so much at this point, I was feeling my stomach however ... so I just had a taste of salty caramel while Tom and Barbara had tiny cones of blueberry and praline I think ... really, I just wanted a bottle of water and a chair. 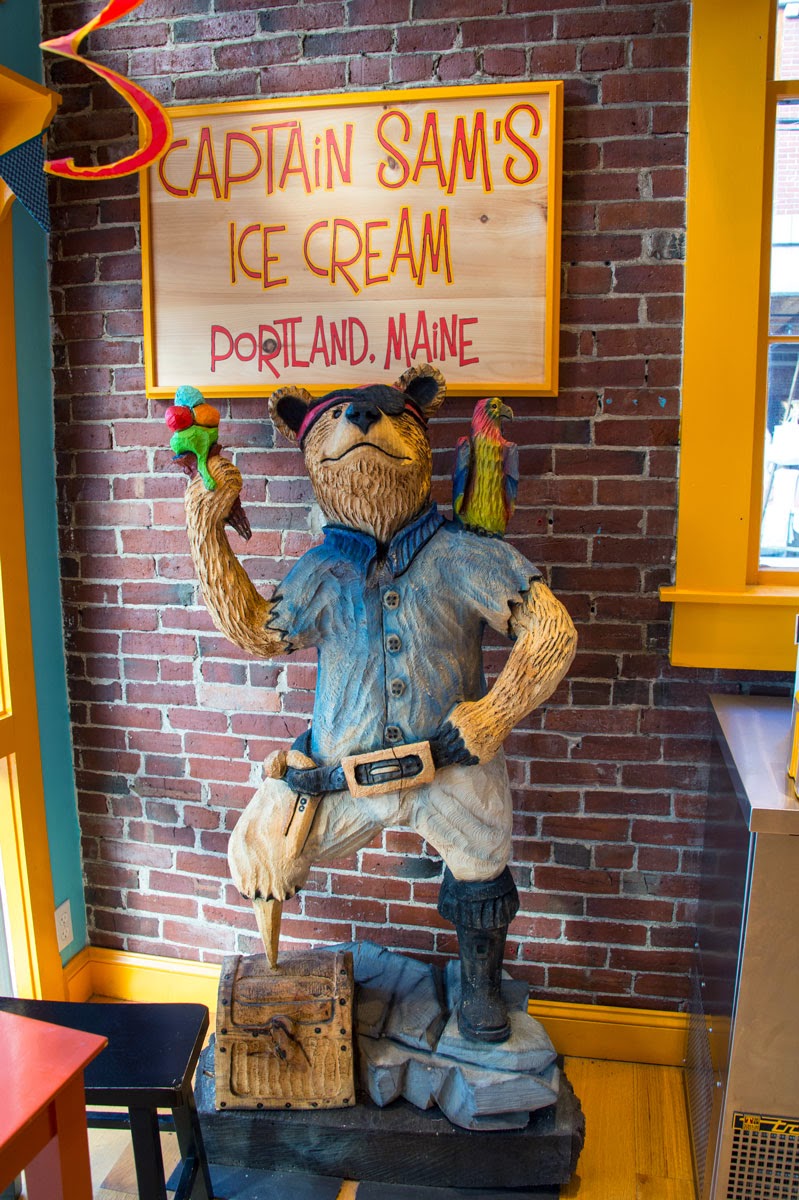 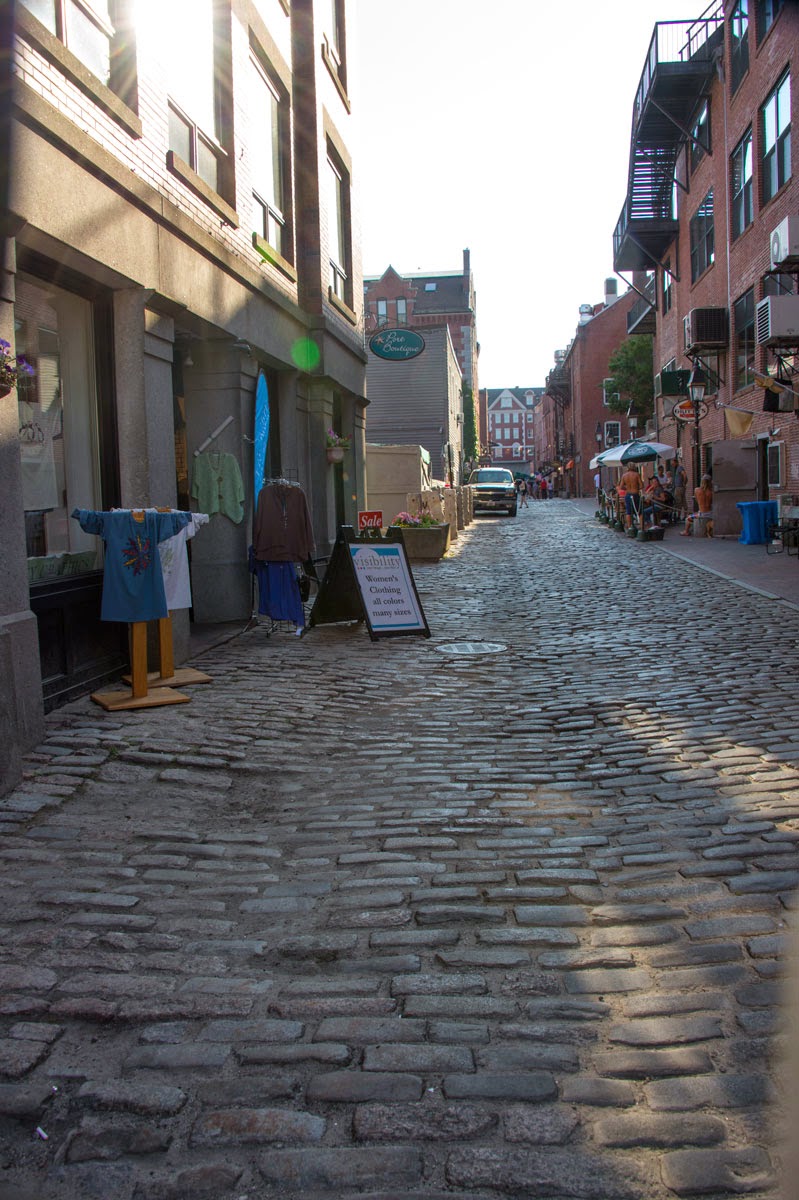 I don't know if all these streets are original, but they sure seem to be withstanding the test of time.  Although a little bumpy to drive over, they are beautiful to see and I'm glad they haven't been covered up with asphalt, like most cities have done. 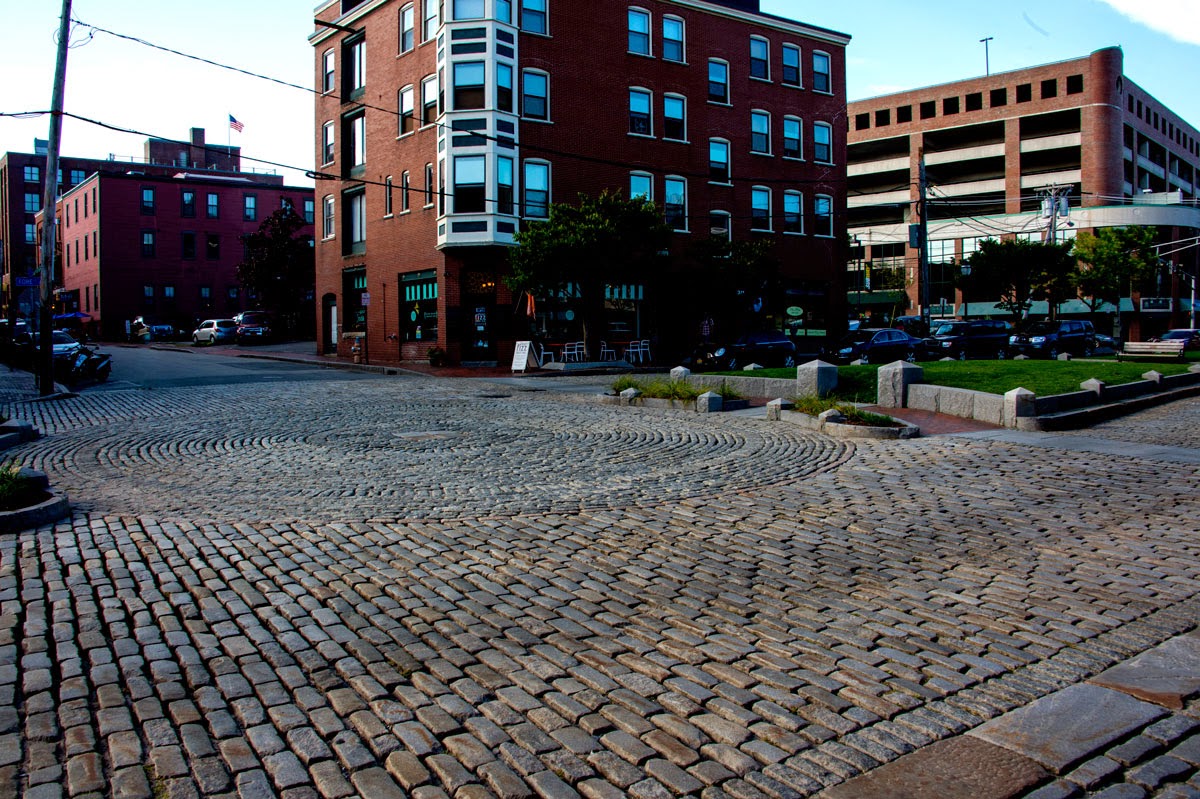 With all these old buildings, outside fire escapes are everywhere, along with bunches of wires providing electricity.  A little flash on this Mustang would have been cool, but this is a walk around, not a photo shoot!! 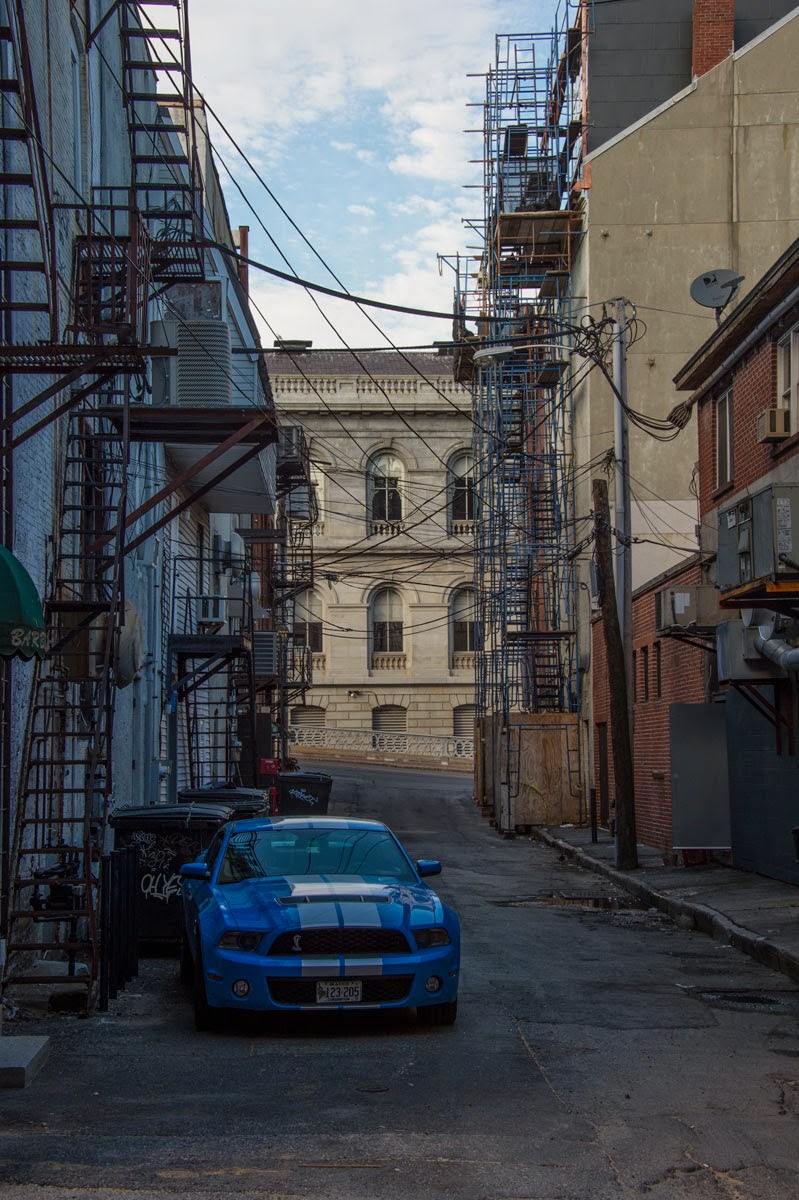 Sam Adams was well represented here at the Shipyard Bar, previously Zeitman's Grocery Store.  All of the old doors and woodwork are still on the fronts of every building.  I oohed and aahed at every doorway!!  I just LOVE that they preserve these old buildings!! 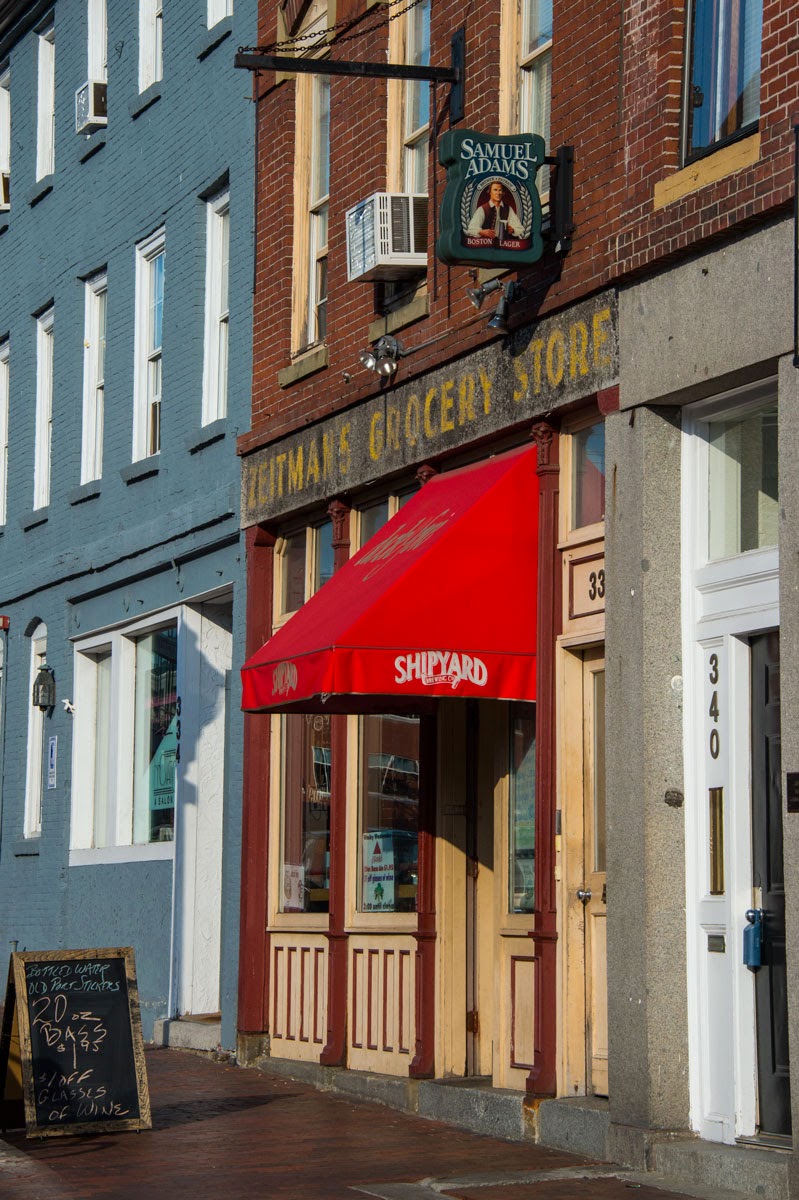 With I think two stops left, we crossed the threshold into Gorgeous Gelato, and were transported to Italy.  No kidding, the guy behind the counter spoke with a very strong accent.  From cannolis to gelato to cookies, this place was packed with goodies AND people ... so it MUST be good. 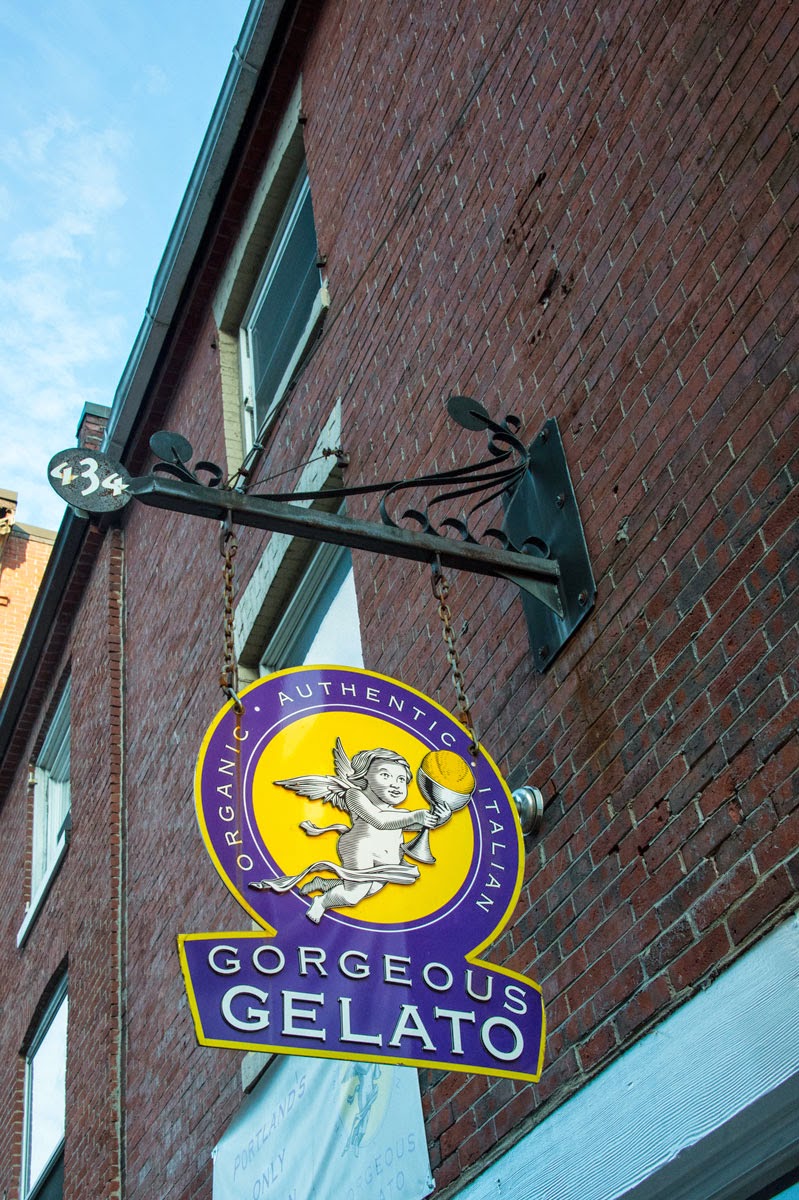 We all ordered the smallest of the small and received maybe half a cup of silky goodness.  I know the dark purple was Blueberry and mine was called Gorgeous (chocolate, caramel and vanilla) ... but I didn't hear what Tom got.   By now we're pretty full of ice cream.  We had at least one more stop to make which was just across the street, but by the time we finished these, we were DONE with the taste testing!!  I'm not sure, but I think the gelato won!! 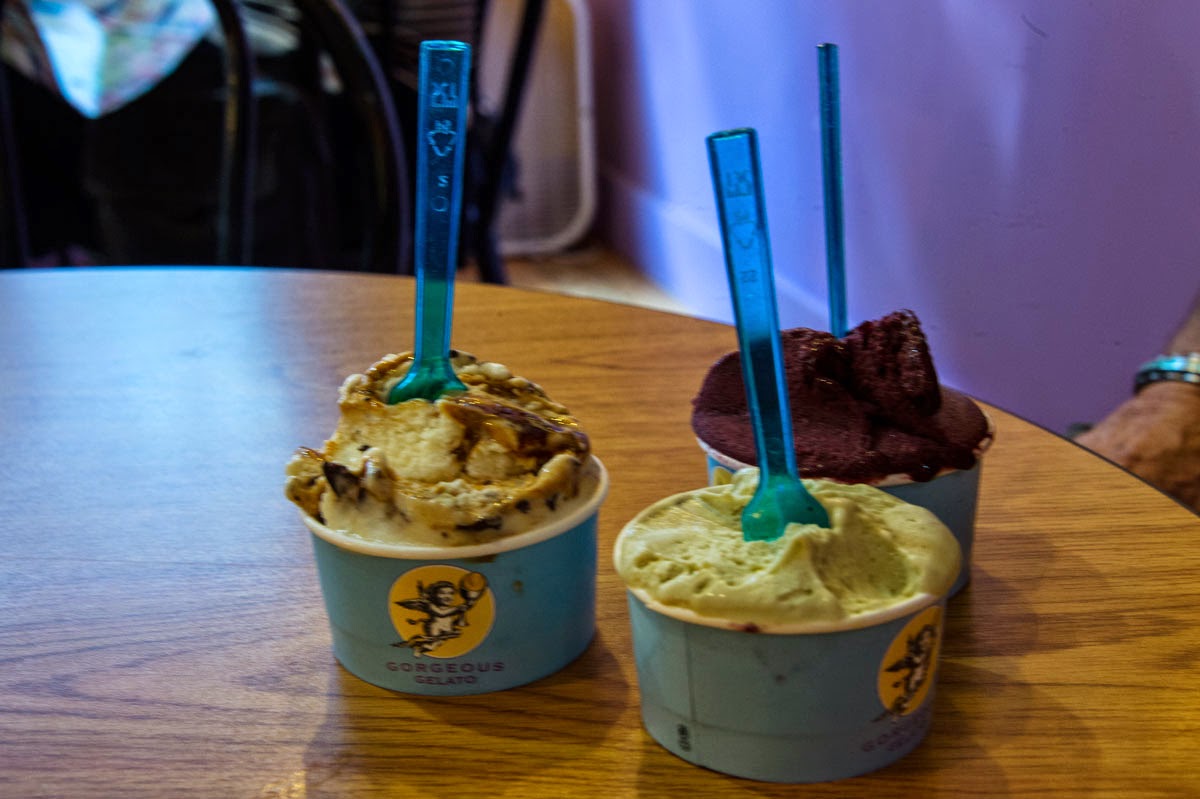 The short drive home by the Boston Red Sox AA Seadogs baseball park was the perfect end to the taste test walkabout.  It's 7:18 pm and almost dark .. and I'm a little queasy from WAY too much ice cream in one sitting.  Who would have thought THAT was possible!!  It certainly was a fun time, but I doubt I'll be doing that again any time soon!!

About that time, the heavens opened up and dumped a few inches of water on us, scaring my puppies into my lap, which really isn't big enough for two.  This morning we mosey on South to another Elks Lodge.  By the way, here's something interesting.  We tried hooking my 30 amp extension cord into another outlet, with no success in increasing the voltage.  Then we tried Tom's 50 amp extension cord (with a 30 dog bone) in the original outlet .. and voila!!!  118 volts instead of 110.  My air and fridge ran all day with no problems!!  I added a 50 amp extension cord to my "Must Have" list.

Posted by Nancy Kissack at 4:25 AM