It's all about the history.  This area is called the Rincon Valley, nestled up against the Rincon Mountains where cowboys of old worked cattle on big ranches.  Cienega Creek runs through here intermittently throughout the year, providing water for families and critters.  It's one of the most intact riparian corridors left in the state of Arizona.  All this I learned from the cemetery.

Back in the day of real cowboys, the pastime of the day was horse racing.  Everyone who worked cattle owned a horse or two, and they all thought they had the fastest in the West.  Bets were placed constantly on who would win.

There were two dirt tracks in the Rincon Valley and one in Vail.  One bright sunny day, two men raced neck and neck to the finish line.  There was quite some discussion about who actually won.  The cowboy who came in second, refused to pay up on his lost bet.  A fist fight ensued, ending with a gunshot.

The dead cowboy was unceremoniously buried on this nice little hill that overlooks the Old Spanish Trail, the most arduous of all trade routes from Santa Fe New Mexico to Los Angeles.  His name has been lost to history.  That was the beginning of Rincon Cemetery. 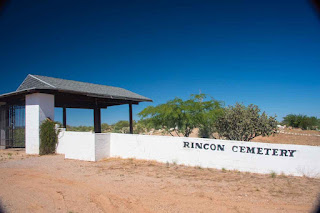 Grave sites meander along the top of the hill.  I was surprised to find so many recent burials.  It was back in 1953 when the little cemetery actually became official.  Doc Kenner from the Rocking K Ranch and his ranch hand Juan Escalante were out riding one day when they stopped in at the cemetery. 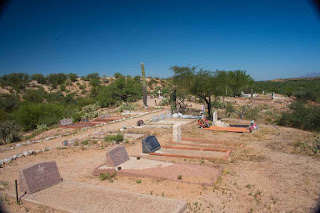 Several graves were not marked and the barbed wire was falling down.  They thought they should make it a REAL cemetery, and so it came to be through their efforts.  Many of the local cowboys got together and built a concrete block wall around the outside, with everything donated by Doc Kenner. 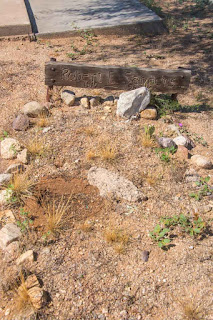 There are still many graves without markers, just a few poles, rotten and falling down.  It was decided that any community member that worked on the cemetery could be buried here for free. 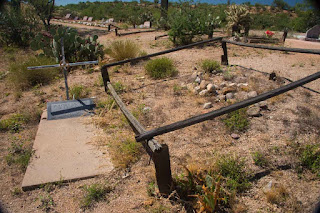 Although there are now a few engraved headstones, many are made from ranch materials, like these T-posts with a horseshoe. 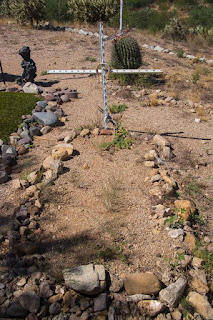 Soon the cemetery became a legal entity, so to celebrate, this beautiful polished metal cross was erected for all that could not afford one. 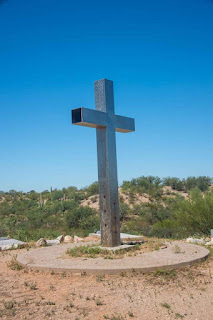 Reginald Russell, born in 1909 and died in 1978, must have been a photographer.  There is every kind of memorial here, from carved rocks to scratches in concrete. 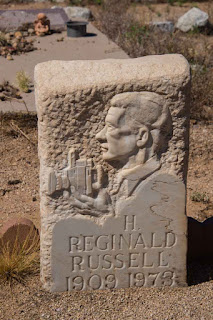 There is even fake grass to mark this family plot. 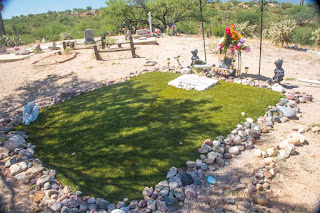 One of the more recent burials is this soldier. 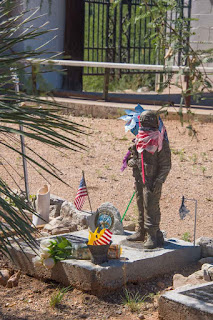 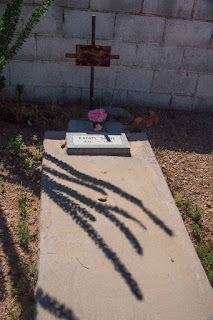 These gates, originally from Spain, were retrieved from Chicago on a flatbed truck, driven all the way there and back by Mr. Lang.  In 1981, Miguel Escalante and several of his brothers built this ramada at the entrance. 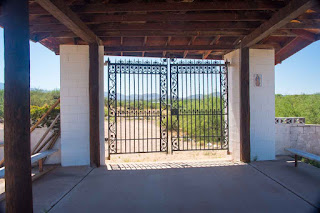 Unlike the last cemetery, this one is kept up very nicely.  It's actually a beautiful place to stop in and admire the Rincon Mountains to the North.  Who knew you could find out so much information from a cemetery?

Next up .... I discovered a trail right here in River City (Vail) that follows Cienega Creek many miles up into the mountains.  I'm guessing that's where all my critters like the deer and bobcat come from.  It may have to wait however, since the weather is still too hot to be hiking.  You can take all the water you want, but you will still die if you stay out in the heat.

Mornings have been a tad bit cooler ... I'm really missing that snow about now.