It's Good To Be OLD

I don't think of myself as old.  I know I am (big sigh), but I don't feel like it.  I'm absolutely SURE I'm only in my 50's!!  So when they said seniors could go to Safeway between 6 and 9 am, BEFORE anyone else is allowed in the store, I had no intention of going.  Shocked as I was that this was going to happen, I am NOT a senior.  I'm sure I just ran two marathons last week. 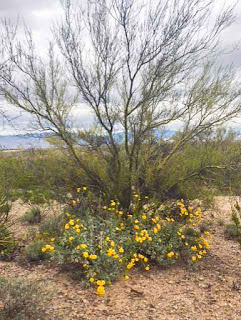 Well ... my memory really isn't failing THAT bad ... I didn't run any, but I did take stock of my cupboard.  I have lots of canned tuna and chicken, with no mayo or seasoning to go with it.  Maybe I'll make one more trip to the store.

Okay, I guess I am old, because they let me in the door before 9:00.  Surprisingly, the produce section was about half full.  I made a trip around the corner to see actual packaged meat.  I applauded the crew who was still stocking the shelves. 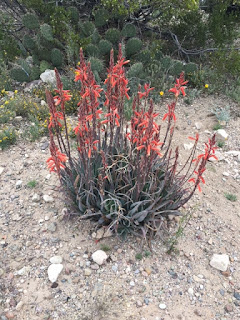 What a surprise to even find 5 sacks of flour on the shelf, but only four packets of yeast.  Arizona must be making bread like crazy.  It's good to be old-ish ... I snagged a bag of flour.  I took three of the yeast packets, figuring to leave at least one.  A gentleman came up behind me asking for yeast.  Oh no he said .... this is all there is?  I gave him one of mine so we each had two.  He was a happy camper and thanked me.  It just pays to be nice. 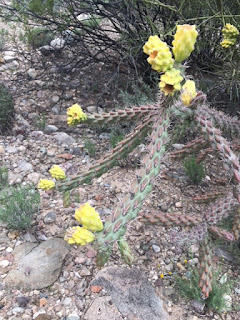 As I rounded the next corner, there was even bread still on the shelf.  The thought occurred to me to check out the soap aisle.  WOW .... I scored a bottle of dish washing liquid!  Is this not crazy in our world that you are thrilled to find a bottle of soap?  Sadly by the time I was done, the hoarders were in the building, raking everything from the shelves and checking out two full-to-overflowing baskets each, with no thought of anyone else.

When I got home, I went for a walk in my back yard again.  I have to say, this not getting out much and talking to someone other than my dogs, is quickly getting old. 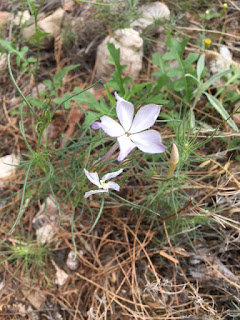 These pictures are from a couple days ago.  The lavender flower above is only half an inch wide.  Tiny little beauties you almost don't even see.  These yellow blossoms are even smaller.  This whole plant is only about 4 inches tall. 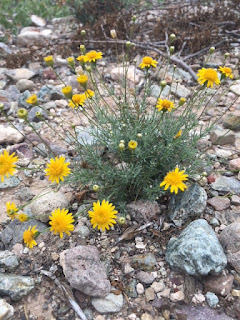 As to the toilet paper crises ... it's good to have an RV.  I have plenty, but decided to gather it up from here and haul it home, just in case.  That's when it hit me!!  I have been grumbling about all the boxes of stuff riding in the back of my Jeep, left over from the RV rally.  Hey ... I have 2500 thin cheesy napkins.  WHO NEEDS TP??  Yes, I will pay for whatever I have to use, but think that won't come to fruition.

In the interest of helping out the restaurants locally, what could be better than an Arizona Pizza Company dinner.  It's Thursday, word of the day being Equinox. 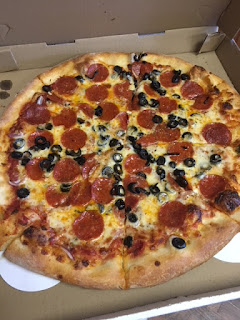 TWINS!!!  I ordered not one, but TWO pizzas.  I just packaged them up and stuck them in the freezer.  Lunch and dinner for the next eight days!!!  Nutrition at it's finest! 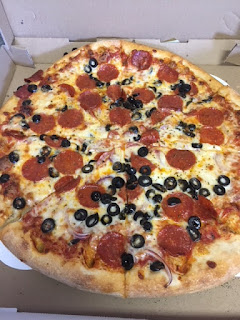 I have heard hoarding is not near as bad in California, however one of our local detectives was diagnosed with the virus as he testified in a murder trial.  Within the day, a second detective was at the hospital.  A mistrial was declared, with everyone in the room quarantined immediately, including the judge.  So TWO confirmed cases in our County.  Let the hoarding begin!

Life goes on ... it's a little harder when you  have no one to talk to the entire day.  I discoed with Jonathan yesterday while counting my blessings.  I have to say the puppies think they are in Heaven.  They get to sit with Mom ALL DAY LONG!!!  I'll be on the couch!