Unfortunately for me, the horse whisperer has not come by to visit.  Instead, all those rug burns came from playing with Cooper on the living room floor for three hours straight.  Several leg muscles, whose previous existence were unknown, came to say hello in a charlie horse kind of way.  THAT resulted in flailing around on the carpet causing the rug burns.

The good news is after eating some salt, the cramps subsided and Cooper slept for the rest of the day and night.  It is rather interesting the angles your toes can create when those little muscles go bonkers.

With all the hoarding going on and no yeast available at my local store, although I was able to procure a package of the old fashioned kind, I kept thinking about how I could make bread without it.  Not that I need bread ... but your mind goes crazy looking for something to do.

Back in the days of the dinosaurs, we made all our bread from scratch, using those solid blocks of moist yeast that you melted in warm water.  Once some of it was liquid, we mixed in water and flour to become sourdough starter.

You "fed" it more water and flour every time you took some out of the crock.  It would bubble up again and smell like heaven.  It sat with it's cheesecloth cover on the back of the stove to keep warm and "working".

I was surprised when my neighbor called to say she had some sourdough biscuits for me, and some starter if I so desired.  Heck yeah!!! 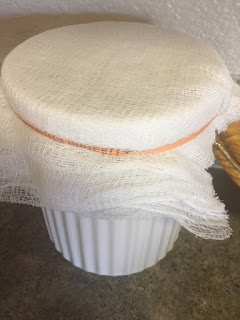 It's new starter, so hasn't created it's best flavor yet.  Some bakeries have starters over 100 years old.  They just keep it growing day after day.  Back in the cowboy days, Sourdough Slim was named because he had the tastiest sourdough biscuits around.

When Patty invited me to dinner, she suggested I make rolls.  It would give me something to do.  THAT was a great idea.  I took two recipes and tried to put them together since I didn't have all the ingredients for either one.  What I DID have was a bread machine that would knead it for me. Yahoo!!

Oh my ... that looked like too much water.  I took some out, double checking both recipes.  Oh NO!!! There's not enough water!  I put in some more.  In no time, I realized I put in too MUCH!!  Good grief.  I sat with a spoon and added one tablespoon of flour at a time, trying to get the right consistency.

At long last, the bread machine was done with it's job and I dumped the dough out on the counter.  I completely forgot about letting it rest.  I chopped it up and let them rise one last time before plunking them in the oven.  I was praying they tasted okay. 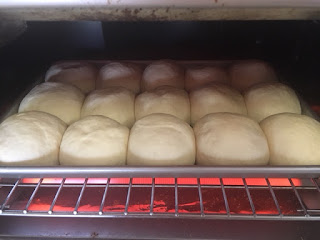 They certainly look delicious!!  You know how it smells so good when you walk into a house that has fresh bread baking?  Not so much here.  I don't understand why ... maybe it's the new instant yeast.  At any rate, they were a hit at the Chance house (even if they were a tad tough) and went perfectly with that wonderful stew.  I may just have to make some more for good measure. 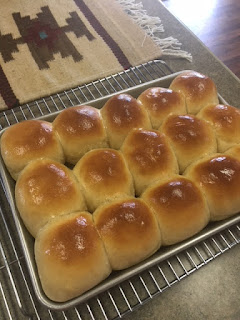 In the meantime, winner winner!!!  I found some of those Monopoly pieces from Safeway and opened them up to discover I won $5.00.  Better than a stick in the eye!!! 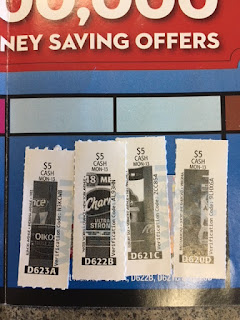 The safari was cancelled due to bad weather.  It got very cold again, with rain and wind on and off all day.  I was rewarded for staying inside with a beautiful sunset. 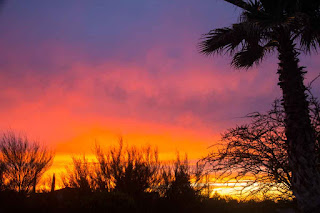 I'm pretty sure all this sitting has extended my undercarriage a couple of inches.  All the more for the puppies to snuggle up against I suppose.

As to our recovery, Stanford University Researchers say we will recover from this pandemic much faster than expected, although I have no idea what time frame that would be.  It WOULD be wonderful news not to have families losing their members.  Just when we think everything is coming up roses, life throws a big wrench into the world.