Trying To Be Politically Correct

We all know things have changed of late.  You really can't express your views any more without being ragged into silence.  It's funny how names have changed in an effort to be more politically correct, even when it comes to Bingo!!

The Elks Lodge has been having a Saturday morning Bingo session for children and adults who need special care ever since I have been involved, and for many years prior to that.  Originally it was Handicapped Children's Bingo.

Now the games we play on Saturday morning are called Special Needs Children's Bingo.  That's not truly correct either, because there are many special need adults that play also.  In all of this, it's not the kids that give a hoot ... they just want to play for the prizes.  It's the parents that get offended and I always wonder why.

At any rate, with another name change in the books, I met the dirty thirty at 8:30 to fill up bags with goodies for each kid to take home, mostly candy, a few prizes and the Elks ball caps they've been asking for every year.  We also loaded up the prize tables.

These are for the most part, the happiest humans I've met.  They all love to get hugs and I imagine are just happy to be out and about.  GROUP HUG!!!  Sorry, I've no pictures because that would be politically incorrect.

We cooked up hamburgers and hot dogs, along with a huge pot of chili and fed close to 100 before they left with their spoils.  Everyone is a winner more than once because they keep playing the same bingo card until at least 20 have won.  Once they win, they get to go to the table and pick their prize.  You should have seen the happy faces!!  It's totally worth all the hard work the Elks put in to this event every year.

On the other hand, I'm not so politically correct when it comes to cooking.  I had a total fail in my crock pot.  I mean really, how can you go wrong with a crock pot??? 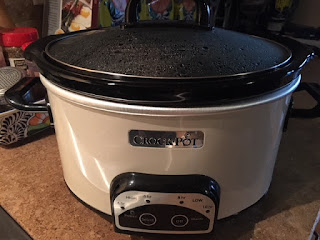 That's tomorrow's story.  I'm going to the store this morning to get something yummy to sooth my Chef's ego.  It's in tatters on the floor at the moment!!  Oh wait ... I'm just a cook, not a Chef, or maybe it should be Baker, or Sous Chef?  Food Preparer??  I've got it ... Kitchen Master!  No, I'm pretty sure THAT one is TOTALLY incorrect.