When Geronimo Roamed The Range

As much as there IS information on Geronimo, there isn't a lot of GOOD information available, so some of his story may not be totally accurate.  The Arizona Historical Society Museum has an entire room dedicated to this warrior if you want to check it out.

Born June 1829 to the Bedonkohe tribe of Chiricahua Apache at Turkey Creek, a tributary of the Gila River in New Mexico, he was named "One Who Yawns".  I'd type his Indian name, but it's impossible to type or pronounce.  His Grandfather was chief of the tribe and he had three brothers and four sisters.  He married when he was seventeen years old and had three children.  That was the first of NINE wives.  Although he was a great warrior, Geronimo was never Chief of his tribe.

In 1851, a company of 400 Mexican soldiers massacred most of the tribe, including his wife, children and his mother, while the men were trading in town.  Thus began Geronimo's hatred of Mexicans.  Revenge warfare became a way of life.  I can't say as I blame him. 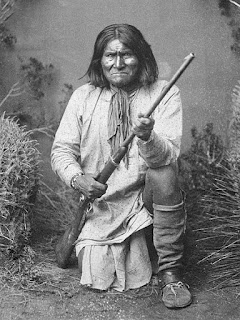 Though outnumbered, Geronimo and the Apache fought the Mexicans and Americans until they decided on a Peace Treaty at Casa Grande in 1873.  The Mexicans gave the Indians alcohol, incapacitating them before attacking and killing 20 more men.  Very much outnumbered, Geronimo and his men fought against Mexican and American troops until 1886, becoming famous for his daring raids and escapes.

Whether for food or for revenge, the lines became blurred and raiding became a way of life for the Apache.  Refusing to accept the American occupation of the Southwest, Geronimo and his tribe fought the Government's plan to move them to a Reservation.  Death and disease, not to mention lack of food, caused the men to lead "breakouts" from the reservation in the hopes of going back to their nomadic life. 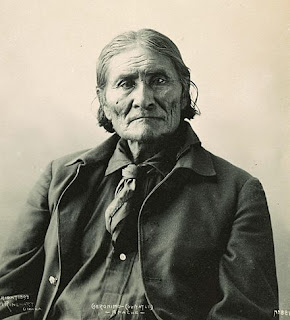 Many escaped to the Sierra Madre mountains in Mexico where the Americans could not follow, until finally Mexico agreed to let them raid the Indian strongholds.  Over time, the Indian numbers became fewer and fewer.  General Crook and his Apache scouts soon found the band and were ready to negotiate a treaty when the Mexican Army showed up and mistook the Scouts for raiding Apaches, killing them.  This is Geronimo on the right, next his brother-in-law, next his son by his second wife and on the left his brother-in-law's half brother.  Confusing, right? 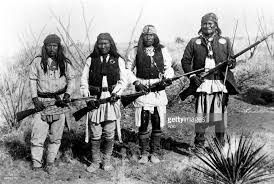 Geronimo, camped on the Mexican side of the border, finally agreed to surrender to General Crook, but when he learned they would be murdered as soon as they crossed the border, they left in the middle of the night.  Crook was fired!!  General Miles took his place and was told to bring Geronimo in dead or alive.  Captain Lawton and First Lieutenant Gatewood were finally able to convince Geronimo to surrender in 1886 at Skeleton Canyon Arizona. 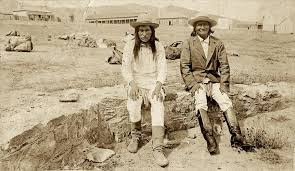 This is the rifle Geronimo carried when he surrendered and is on display in the museum.  Here's a double cross for you ... Geronimo, his band of 39 AND the Army Scouts (those still alive) who helped track him down, were ALL imprisoned and sent to Fort Sam Houston in Texas, eventually being transferred to Fort Pickens in Florida where they would NOT stand trial for murders they had committed in Arizona.  In 1894, they were finally sent to Fort Sill in Oklahoma. 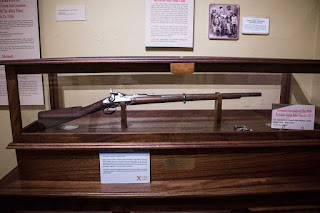 On the train ride to Oklahoma, many people wanted a souvenir of GERONIMO!!  He would cut buttons from his shirt and sell them as trinkets.  When the buttons were gone, he would buy more and sew them back on, only to cut them off again.  In the early 1900's he became a star at Expositions all around the country, including the Pan American Exposition in Buffalo New York, where he wore traditional clothing and posed for photographs.

In 1905, he and several other Chiefs, rode in Teddy Roosevelt's Inaugural Parade, bringing the crowd to their feet.  Shortly thereafter, Geronimo made a plea for the return of his tribe to Arizona, but Roosevelt refused on the grounds the Americans who had suffered losses would attack and kill them.

In February of 1909, Geronimo fell from his horse and wasn't found until the next morning.  He died of pneumonia, still a prisoner of Fort Sill.  He confessed to his nephew that he should NOT have surrendered.  He should have fought until he was the last Indian alive.  In the end, he did admit some white people were peaceful, but he never lost his hatred of the Mexican people.

It's sad that the early settlers road roughshod over the Natives.  In those days I guess people thought they had the right to take anything they wanted ... sort of like the world has for centuries.

At any rate, Geronimo's story is told and retold at the Historical Society's Museum in Tucson, along with many other stories of early settlers.  Stop in and take a look see ... you won't be disappointed!!