I know the early bird gets the worm, but did you know the early bird also gets lots of free prizes?  Neither did I, but Miss Pat was right on it.  Up even earlier in the morning, we headed out for the hour's drive to the Conquistador in Oro Valley.   If you wonder how we could possibly get there in 45 minutes, it's because the speed limit is 75 mph here.  YIKES!!

Thanks to the Valet guys ... this is like real UP TOWN ... we were inside and seated with coffee when the opening bell rang.  This early session was all about signing up for the monthly packet of designs.  Good heavens, it will take me YEARS to get through even half of what I've already received.  Just for showing up early however, we got ANOTHER CD of designs.  I've never been anywhere where they gave away so much stuff.

Here's a few examples of what I can make.  This isn't printed fabric, it's all embroidery.  I think there will be several of these on my Christmas giveaway list next year. 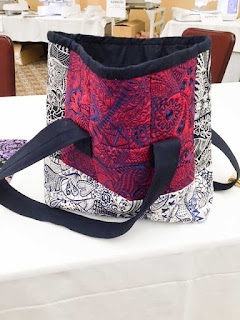 Since I'm SEW into quilting (see what I did there?) and Halloween for that matter, this will be one of the first on my list to make.   From all the talk around the room, I guess Anita GoodDesigns really ARE the best you can buy.  Others apparently don't turn out as well as these, or so they say. 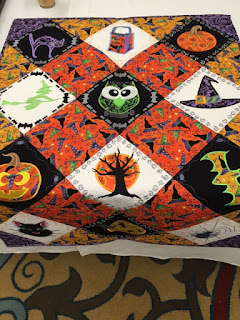 If you really like your State ... which I don't ... you could make this wall hanging.  Not really my cup of tea, but there are a million other things to do. This one we worked on yesterday (actually I didn't, the other lady at our table did) was cutwork on table linens.  Normally you embroider the fabric, then spend hours cutting out the holes ... therefore cutwork.  With this machine, it outlines a large area, you cut it out, then it embroiders over the whole thing, leaving holes.  Easy peasy.  I'll probably do something cowboy-ish and drag out my mothers antique brand dishes to match.

Here's another thought ... embroider towels or napkins and keep them in a drawer as hostess gifts when you are invited to dinner at someone's house.   So if you need any towels, invite me to dinner!! 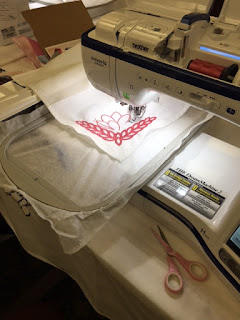 Lunch was humongous, salad and meatloaf with mashed potatoes (YUM) followed by cheesecake.  I let my manners fly off with the wind and ate Pat's dessert too.  Back to sewing, I was pretty miserable, which serves me right!! 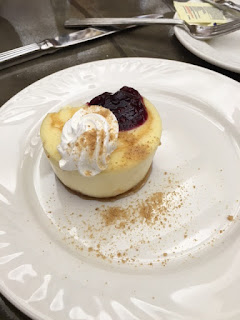 I didn't win the Grand Prize, which was a super duper free standing light, but that's okay.  At least I have those things overhead that you can turn on with a switch.  Here's my stash of free stuff.  Can you believe it??    Some of these packages retail for $250, which is pretty crazy.  Each packet contains from 50-1000 designs you can embroider, along with all the instructions to make hundreds of projects. 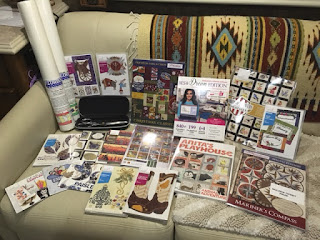 I got one more freebie.  You can use any thread you want, but for embroidery it should be a little thinner to keep breakage to a minimum, not to mention keeping the machinery free of thread fluff.  This stuff retails for $3-5 per spool.  Mine was free ... that's FREE with a capital F!   I'm pretty sure they do all this "free" stuff so you don't feel so horrible about spending such a ridiculous amount of money on a machine. 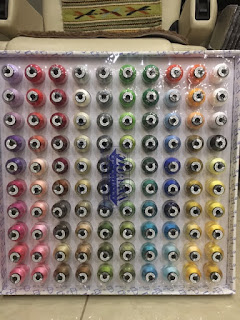 With Embroidery 101 finally over, Pat dropped me off at home to find my house all locked up.  RATS!!  I left my keys, thinking Patty would be home and I wouldn't need them.  Plans change ... Dan got home and they went to watch Granddaughter Laila at her horseback riding lesson.  Lucky for me, they weren't far away.

On the way to dinner at El Coronado Restaurant where we had fun digging through the chips for those yummy flour tortilla pieces, we watched a beautiful sunset. 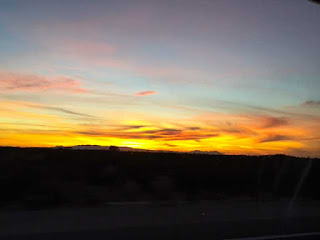 Isn't this fabulous??  I was sure wishing I had my camera with me, but this isn't bad for an i-Phone picture out the front window while sitting in the back seat!! 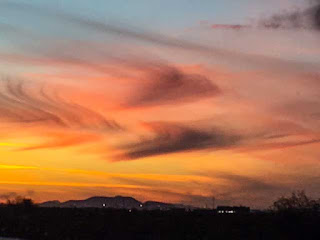 I'm having leftover tamale, rice and beans for breakfast while I sit on pins and needles just waiting for Saturday afternoon when I can get my machine.  I should be out shopping for a few pieces of Thrift Shop clothing to embroider for practice, but I have to sit tight and wait for the Safelite repairman to fix my windshield.  I almost forgot they were coming.

In the meantime, I'm making up that project list!!