Back in the Good Ol' Days when there were still small cattle ranches in California, we rode our horses every single day.  We were either fixing fence, changing the water to run into another pasture or bringing in sick cattle for doctoring.  Once a year we would round up everything for the annual branding and shot routine.

We would run the cattle through a long narrow wooden corral-like thing we called a chute.  With the back gate down to keep them in, my Dad would walk along the upper deck and give multiple shots to every animal ... things like leptospirosis, pneumonia, hoof rot, lots of ugly diseases that could kill them.

During the branding, all the neighbors would come to our house ... mostly because we had the best set of corrals and the best cook ... my Mom.  It was always a game to see who could catch the calf first with the fewest thrown loops.  My favorite was of course Barrel Racing!!

When Patty and Dan said they were taking granddaughter Laila to the Junior Rodeo, I thought I might miss it since I was scheduled to leave.  What the heck, I signed up for another week.  The Tucson Rodeo is a big thing around here, as it is in Phoenix and Las Vegas.  Unfortunately in my neck of the woods, it's becoming something of the past.

So here we go boys and girls ... clap your hands and cheer for the fastest times!!  It's RODEO TIME! 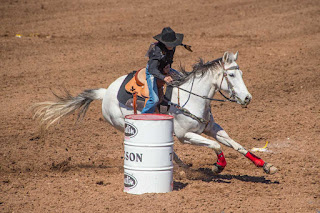 I'm sure all of these kids were born and raised on a ranch like I was ... including this eleven year old who's a champion in the making.  He won $7000 last year in the calf touching competition.  What is that you ask??  They catch the calf, jump off and run up the rope like the big boys do, but instead of laying it on the ground and tying it up, all they have to do is touch the calf.  It's a little easier on the kids. 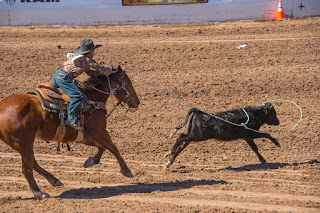 There were not a lot of entrants in the Junior Rodeo, so it was over in about an hour.  Next up was the Cowboys doing their thing in the preliminaries.  If you score high enough during the earlier rounds in the week, you get to ride for the money on the weekend. 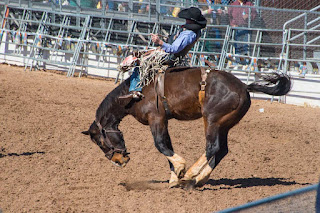 I have to tell you, this is not the rodeo of MY youth, even though Beutler and Sons still provide the bucking stock.  These horses have a lot of draft horse in them, making them HUGE and possibly not quite as hard to ride. 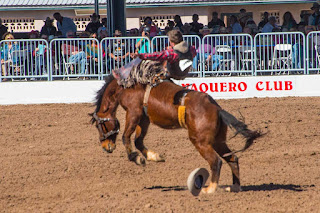 Don't tell the cowboys I said that however, as I'm sure they would be quick to disagree.  I think everyone rode their horse the full eight seconds. 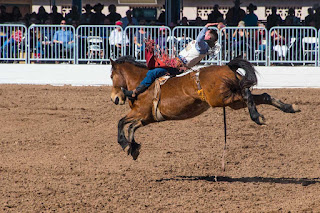 Here's a future barrel racer in her cute pink hat.  In my day we wouldn't be caught DEAD in a pink hat, but today it seems to be all the style.  Her sister had one just like it and I saw loads of them for sale. 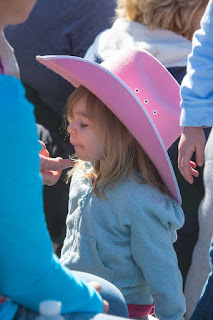 Once the eight second buzzer rings, you have to get OFF the bucking horse.  I honestly can't remember if this guy rode to the bell or not, but when he hit the ground, he got smacked by a hoof.  Once you are ON the ground, your first reaction is to get up.  When he raised up, he got a hoof in his back, knocking the wind out of him.  You can't really tell, but all of these cowboys wear Kevlar vests for protection.  He was a little slow to get up, but was okay. 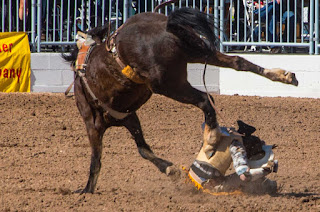 Here's one for the bigger, stronger boys.  You ride your horse at a fast gallop to catch up to the steer, slide off the side going maybe 25 miles an hour ........ 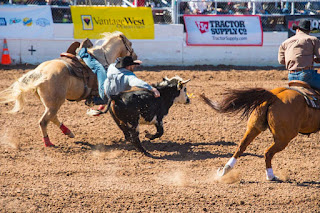 grab the horns and wrestle the steer to the ground.  Hopefully your horse keeps going.  Here's a little known fact about rodeos.  Those guys that own the best horses will loan them out to the bulldoggers and ropers for a good chunk of the winnings.  The rider gets the money points and maybe half the cash. 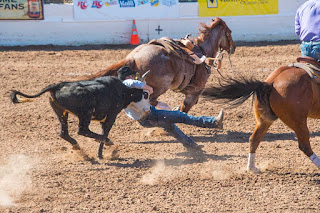 That way he doesn't have to maintain the horse in the lifestyle he's become accustomed, which is VERY expensive!!  If you watch closely, you'll see riders changing horses in the chutes quite often. 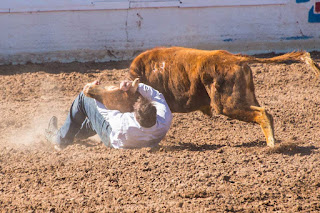 This cowboy had a bad day ... and so did the horse.  He's already in trouble here as the horses hooves dug into the ground ... soft on top but hard as a rock underneath, making the horse slip. 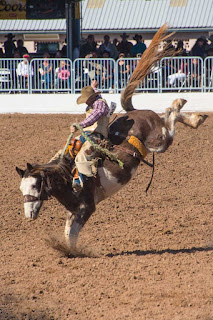 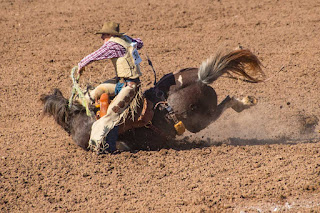 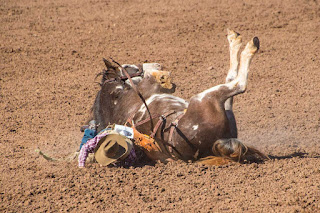 In between the Junior and Pro rodeos, there were vendors surrounding the huge stands selling everything cowboy, and maybe a few things not so much cowboy.  I saw LOTS of really cool purses, but you'll be proud to know I didn't buy a single one!!  I stared at these beaded belts for quite a while, but passed on those too!! 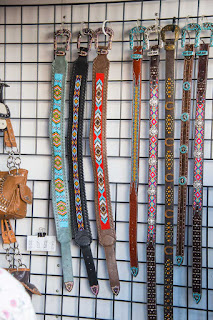 In the second half tomorrow, I'll show you what I DID buy.  Even Patty said she was proud of me for not spending a wallet load, since this is MY kind of stuff!!

Believe it or not I took 688 pictures ... aren't I glad we went digital!! ... and had a hard time picking which ones to show you.  With this many, I have to break it into two days.  The bulls were the last to be ridden in a much smaller arena, making for "fence and hat" pictures, but you'll get an idea of what it looks like to ride a bull. 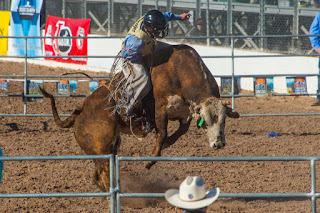 Having been around bulls most of my life ... and by that I mean the cattle variety ... I have a lot of respect for their power.  I know they can bowl a horse over in an instant and those horns are most dangerous.  Would I or did I ever ride a bull?  Not in a million years ... but I did climb on a calf or two!!