"Birds Poop On My Shoes"

I've heard lots of excuses why NOT to see the birds at the zoo.  While at the Reid Park Zoo in Tucson, I heard the best excuse of all ... from a little kid visiting with his parents.  "I don't WANT to go see those pink birds .... I don't LIKE birds ..... they POOP ON MY SHOES"!!!  Okay my little visiting friend ... I suppose you are right to some extent.

The peacocks were out in huge numbers, hanging in the trees and on the fences.  Their feathers are so gorgeous they make you want to pet them. 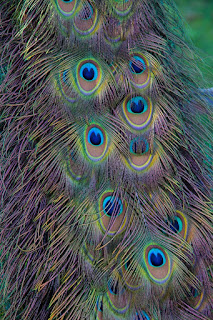 At least I know the names of these without looking in my bird book.  There was even a white pea hen, but she wouldn't pose for a picture.  As soon as a couple of kids came around, she was gone with the wind. 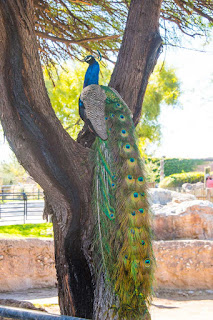 Since there was no parental supervision close by for the busload of kids arriving after me, they ran wild through the aviaries, not seeing a single thing, then complaining there was nothing in there!!  I bided my time and waited.  Pretty soon the songs began again and the birds came out of hiding.

If you know what any of these birds are, please let me know.    Although I spent some time thumbing through my book, most of these were not listed.  Possibly because it says something about North American birds on the cover. 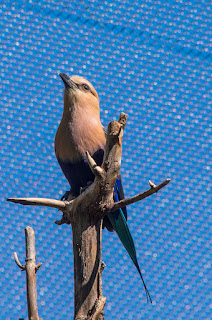 These beauties were getting their morning exercise, not stopping for long at all to pose for pictures.  I'm guessing again that this is some kind of tanager.  If you are even more quiet, they will sing for you.  What a great way to start the day ... listening to the birds talk back and forth. 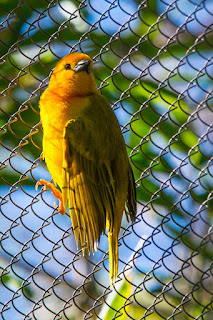 Another beauty with an amazing eye.  As soon as the camera clicked, he was gone in a flash!!  These guys are really FAST!! 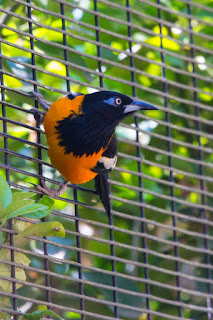 Watch where you step around the flamingos.  There are lots of Mallard Ducks sharing the same pond. Sure enough, little Davie (or whatever his name was) got poop on his shoes and was very unhappy.  "SEE ... I TOLD YOU SO"!!!  Just watch your step around this big pond. 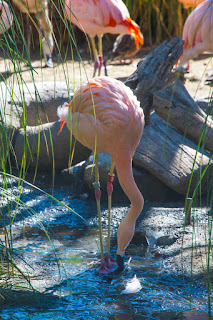 "You looking at ME"????   This spoonbill was pretty animated, giving me some of the weirdest looks, all while perched on one foot.  He gave me a couple of head turns like WHAT ARE YOU DOING? 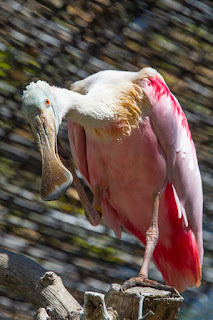 Wait ... I know what this one is ... he's a great hornbill.  Larger than toucans, this guy stands about 30 inches tall.  He made about as much noise as the kids did who ran right by him without seeing his magnificence.  See that thing hanging in the top right corner?  That's his play toy which he banged around with his huge beak.  It must have been a good day in Hornbill Land. 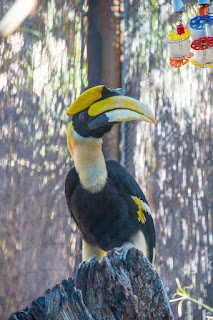 At long last, the kids left in one fell swoop, leaving the zoo much more quiet.  Time for a little lunch. As always, I asked the kids at the counter what THEY eat for lunch.  "I make a pretty mean cheeseburger with fries" won the coin toss.  Let me tell you, he was right.  It was delicious!!!  Yes, those are french fries, not mac 'n cheese ... if you think different, it's just a figment of your imagination, because they don't make substitutions!! 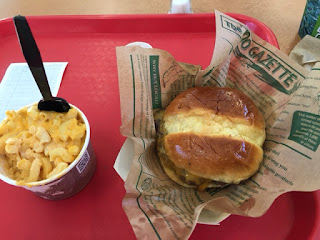 Finally back at the rig, I downloaded 179 images.  Gee, I must not be feeling well.  That's a drop in the bucket for me!!  Maybe a little Tillamook ice cream will make it all better .... or not.  As much as I love Tillamook, the new Double Peanut Butter fell flat.  The only thing that tasted like my favorite peanut butter was the topping, which was gone in the first 15 seconds.  That's too bad, because I bought TWO!! 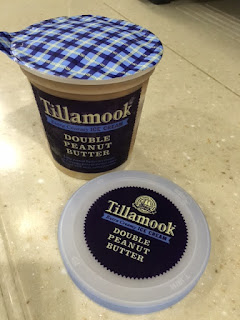 Some of you may know the Tucson Rodeo has been going on this week, mostly preliminary runs for the money show this weekend.  Today however, is the Junior Rodeo, a favorite of the Chance granddaughter Laila.  We'll be going this afternoon.

In the meantime, I'm praying my neighbor's leave.  The jet engine roar of the heat pump six feet from my bedroom window has me in a lack-of-sleep haze.   I often wonder how people can sleep with that roar just above their heads.  Those trains at the Chance Ranch are looking (and sounding) better and better!!