It's A Different Arizona

I don't know how many years I've been coming to Arizona, I've lost track.  This year it just seems different.  I'm guessing that's because of the weather.  It rained on and off Saturday, enough that the 1:30 am drag races were for nought.  They tested the track on and off all day, but the wet pavement made conditions unsafe.

The same happened on Sunday.  They tried a couple of runs, but the incessant rain just wouldn't let it happen.  The drags went home.

Although I got a little damp around the edges, it didn't keep me from taking pictures of my favorite critters at the Living Desert.  If you didn't know better, you would think you just spotted a coyote in the wild ... which you kind of did.  The netting around these guys is so fine you almost can't see it.  Last year I stalked this coyote for fifteen minutes before I realized he was contained.  How embarrassing!! 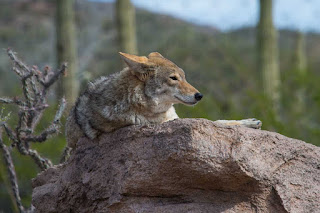 They are beauties in my book, very well fed and in excellent condition.  The coyotes where I come from are darker brown and not near as fat! 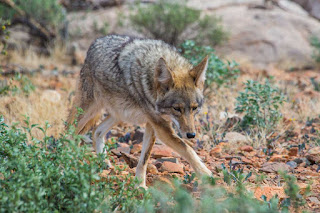 In case you were wondering, yes they do eat pets.  Please don't let your little dogs and cats roam about the desert and PLEASE don't tie them up outside your rig.  They will become breakfast!! 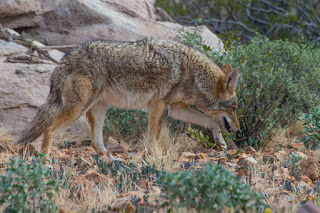 I didn't know there were bears around, but I suppose in the mountain areas black bears roam around just like in Yosemite National Park.  While working in the park many moons ago, I watched from my second story dorm room as a young bear got caught up in a phone booth.  Remember those green things with the folding doors?  It took three of us quite some time to sneak around and push the door back open with a stick. Oh for the days of old!! 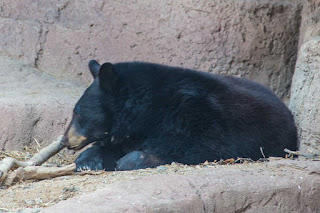 Due to all the rains, Arizona isn't it's normal brown desert self.  It has probably rained one out of every three days since I've been here, turning everything green.  The cactus are happy, the creosote bushes think they are in heaven and the ocotillo are sending out green leaves up and down their spines. 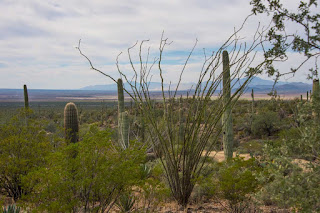 It's been down to 30 degrees since I've been here and up as high as 85.  Although I imagine they are used to the temperatures, these Mexican Wolves were panting a little on this day, as was I from all the hiking around the Living Desert Trails.  Some of these are a mile or more long ... take water with you. 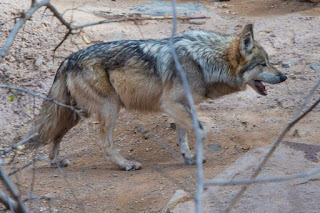 The vistas are amazing since it's all downhill from the buildings to the mountains in the distance.   I could sit at this spot and contemplate the world for hours, but I would have been very wet and thirsty.  There's nothing like a little rain and wind, not to mention that long hike in cowboy boots, to work up a thirst.  No worries, I'm used to wearing boots all day. 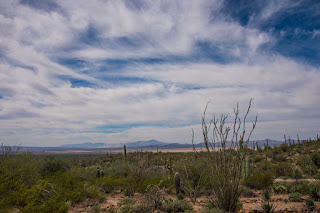 This little guy obviously had it made.  As the skies cleared up, he sat on his rock and sunned himself. It certainly doesn't look like he's missed too many meals.  I don't think I've ever seen a squirrel this fat!!  He is actually a critter of the desert and NOT in an enclosure.  He's found the perfect spot between the bends in the trail to beg for food (mostly popcorn) from both sides.  His strategy seems to be working. 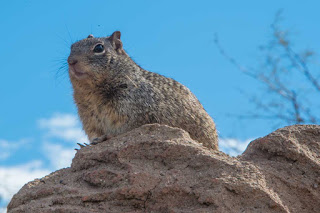 There is a hummingbird enclosure here that you should not miss.  As you walk around inside, you will hear the beat of their tiny wings.  Take a seat ... stay awhile ... and watch these babies scream by inches from your face.  They have even been known to land on you.  Rather hard to capture on camera since they are so fast.  About the time I finally found them in the lens and got focused, they were off again.  Just be patient!! 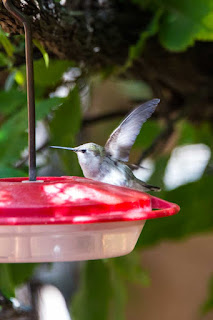 I wasn't ..... patient that is.  It was getting late in the day and I still hadn't hit the gift shop.  For whatever reason, I looked up just as I rounded the corner, and what should I see but a hummingbird beauty sitting in the top of this 25 foot tall tree-bush-weird thing.  I started snapping away. 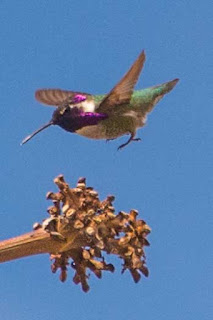 I'm sure people thought I was crazy, taking pictures of the sky.  No one seemed to notice the little guy. Who knew there were hummingbirds in the desert?? 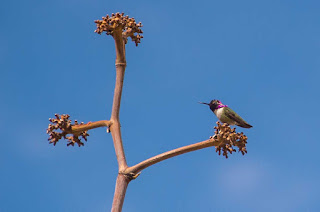 One more view of the valley below.  I simply cannot imagine pioneers coming here and thinking they should settle down among the cactus.  Maybe it was the thought of trying to cross that huge expanse of sand and prickly things that made them park their wagons. 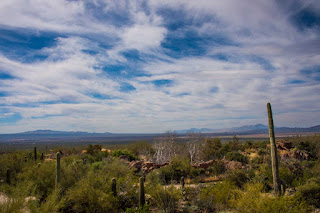 For an extra fee, which I did not pay, you could pet the baby stingrays.  In the desert?  Yup it's a different Arizona alright.  Since I could pet lots of sea creatures in California, I passed, but that didn't keep me from the small building full of fish.  The little seahorse was hard to see against the bright blue painted background. 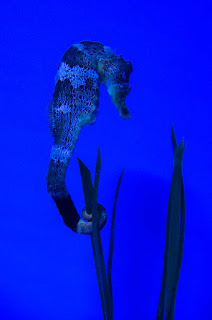 These little guys I've seen many times underwater on diving expeditions.  About 3 inches of their pencil-thin body sticks up out of the sand while they wait for food on the current.   Very territorial, they swing back and forth at their neighbors making sure no one encroaches. 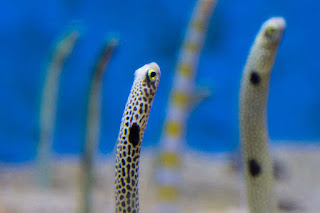 If you walk too close, they all disappear in a flash under the sand.  Once one raises his head, they all come back out.  In Hawaii we saw the same thing, but they were the size of your arm!! 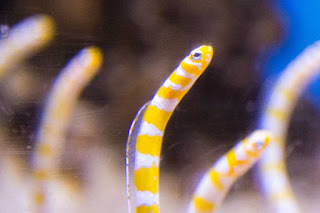 There were a few fish I'm sure you've all seen, but this little puffer guy was cute as a button.  He's called the Target Puffer ... probably because he sports a target on his back!! 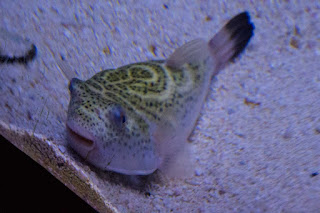 There were lots of other creatures ... javalenas, tortoise and lizards if you could find them ... check it out if you have three or four hours.  You'll see some amazing creatures, not to mention the gardens full of beautiful cactus!

Unlike most places, here you do NOT exit through the gift shop, but I wouldn't miss it for the world.  Some of my best treasures have come from there, not to mention the dollars are going to a very good cause.  My two latest acquisitions ... tiny Indian pottery pieces.  The bottom one is Acoma, the top Pueblan.  These two will reside on my tiny shelves in the rig.  One of these days I'd like to try pottery myself. 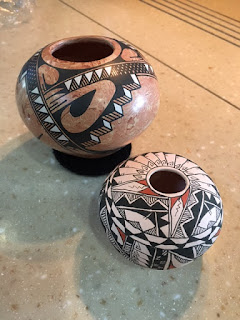 The rain came down more and more on Sunday until it sounded like someone was dropping huge rice kernels on my roof.  The wind would come up and roar, then settle down before another round of rain hit the ground.  It's a different Arizona this year ... everyone says they've never seen this much water.   Sounds like California, right?  So much for coming to the warm desert for the winter!!  No matter, it has been nice and cool, which I greatly appreciate!!

I've no idea what's on the schedule for today.  Maybe just a nice rest in the rig with the puppies.  BORING ... but they have been very patient while I galavanted around the country.  In fact, it's time to head out and forage for puppy food.  There must be a Petco around here somewhere!!