Cleaning is NOT on my list of fun things to do.  Try as my mother might to make me love it, she just succeeded in making me an outdoor girl.  I'd rather clean out horse stalls than my house ... but with not much else going on, it was time.

What actually spurred me into action was a visit to an Open House.  I used to live on a beautiful five acre spread that I sold when my parents passed.  The new owners purchased it, completely gutted the interior, then renovated it into something that should be in a magazine.  My Realtor said to come take a look, since she sold me the house years ago.  WOW is all I could say as I walked around.  I've never seen such an immaculate place.  I thought I was in Martha Stewart's living room!!

Now feeling bad about my dirty house, I got a burst of energy, lots of rags and cleaned from floor to ceiling ... well almost to the ceiling.  Once I get in the cleaning mode, everything's gotta go!!  I loaded up boxes of donations, moved that huge couch out of the living room and called LOVE Inc to come get it all.

I quickly discovered the previous owners had dogs, which they apparently locked in every single room in the house, leaving horrendous scratches on the doors where they showed their displeasure!!  Here's a tip you've probably heard before ... grab a piece of walnut and rub it on the scratches.  It really does work!!  Eight pieces later, most of the scratches disappeared.  That worked so well, I tried it on my kitchen cabinets that were nicked and scratched from wear and tear.  What a difference!!!  They look brand new!!  Not sure how long it will last, hopefully until I clean again next year!!!

In taking stuff out to the garbage can, which was full after the second load, I took WAY too much notice of the dirty patio furniture.  I'm not sure why there's so much dust here, but half an inch thick is pretty bad!!  Six Swiffer dusters later, it was halfway clean as I moved one set out.  When I put the umbrella up, it actually felt like spring!! 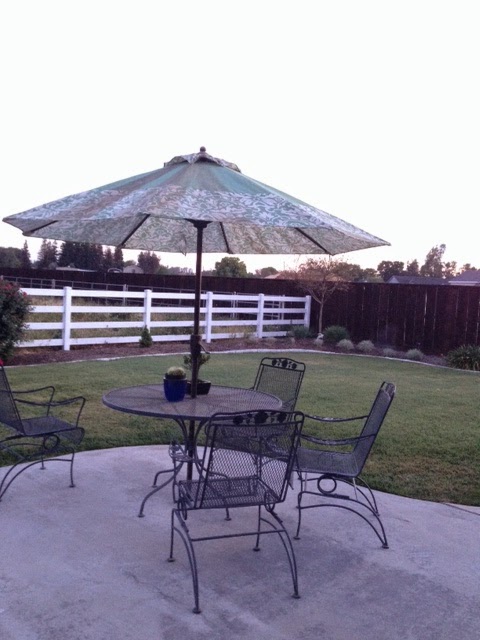 Not that I use these pieces much ... I'm not the party girl I used to be.  It's nice however, to go outside in the morning and have coffee and breakfast.  It's really not going to rain ... I took these pictures in the early morning light. 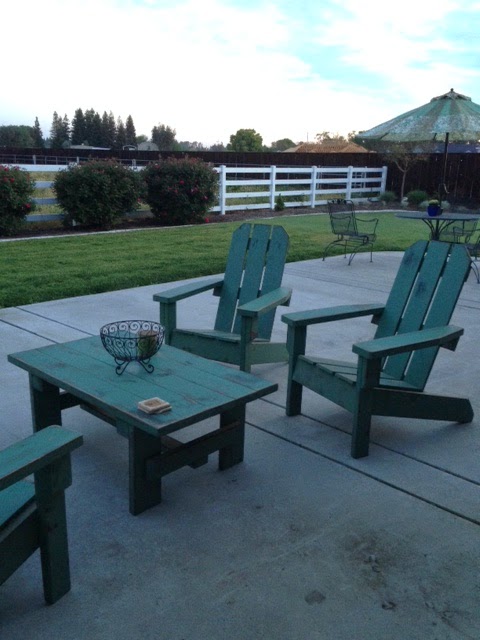 Sitting at my computer, I felt a nice sunrise coming on, so I opened my shutters to find a broken window in the living room.   Hmmmm wonder which neighborhood kid caused THAT??  The joys of home ownership!!

At any rate, the patio area now looks rather forlorn ... maybe a little gas fire pit like Martha Stewart's house, would warm it up!!!!!  The outdoor kitchen area still needs a cleanup, but the trash can is stuffed to the brim.  The black hole in the cabinet is for a refrigerator, but with no parties going on, it will just remain a black hole!! 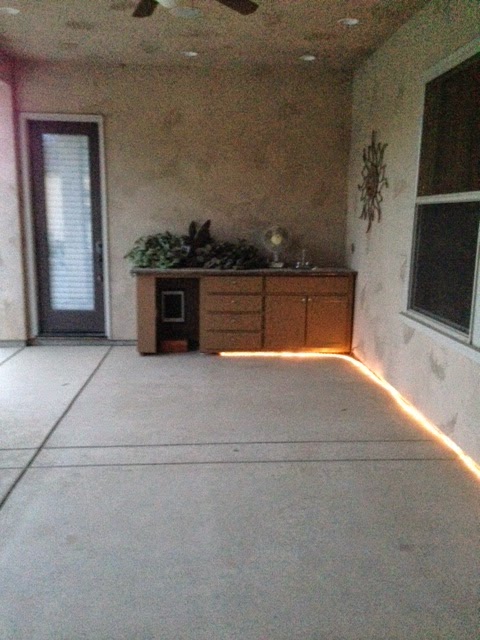 More cleaning will go on today.  I really have to learn NOT to purchase momentos of trips I take.   It's just entirely too hard to clean all that stuff!!!   They all hold such great memories that I can't let them go.  Maybe that's why I still have all those boxes of junk in my garage ... I mean treasures!!!

It's Magic Kingdom day, so Cinderella has to get her act in gear and finish cleaning before the Kings Ball tonight!!  Now where did I put those glass slippers???