With a short two hour drive home yesterday, I took my time hooking up and packing away my treasures.  It's funny, because as soon as I start putting things away, the dogs KNOW it's moving time.  Jessie runs and hides in the bedroom and Cooper gets hyperactive!!  It's been a great three days here at Cal Expo and I'll definitely do it again!!

This is the second canvas I found at the Needlepoint Store in Auburn.  I thought the cow was appropriate!!  The thread and stitches the nice lady picked out for this project are fuzzy and sparkly!! In the "old" days, we just made sure every hole was filled with the same thread.  It's time to be a little more creative, as all the suggestions came from the First Placer winner at the California State Fair!!   Yikes!!!  I'm glad she won't see the finished project ... I'd hate to disappoint her!!! 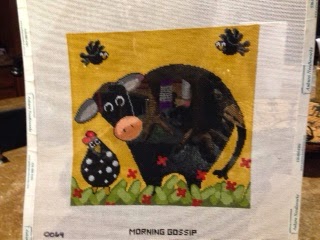 Leaving on Sunday was a good idea.  Traffic was very light as I pulled out around 10:00.  Amazingly, there was little to no road construction, just some barriers by the underpasses ... the entire trip!!!  I read an article the other day about how the California Governor Brown had taken all the highway gas taxes designated for new roads and used it for other purposes, so for the last umpteen years, there have been no infrastructure improvements ... obviously!!!  Finally, the roads are in such bad condition, they have no choice but to fix them, since flooded areas have caused accidents and lawsuits.  All I can say is it's ABOUT TIME!!!

More slow internet here at home, so I finally called my provider, Clearwire ... or CLEAR as they like to call themselves.  I found out they were recently bought out by Sprint, and I imagine that's one of the reasons my signal is bad, since the timing seems to coincide.  The girl was no help whatsoever, and I could tell she was typing in questions and reading responses.  When I called her on it, she sputtered something about she wasn't doing that.

We unplugged the modem for the hundredth time, resulting in no change.  Then she wanted me to plug my computer directly in to the modem so she could do some tests.  Sorry, but I'm NOT giving you a direct connection to my computer!!  I asked for a REAL tech or a Supervisor, but she wouldn't give me either, so I suggested I would just have to look for another carrier.  Wireless is my only choice.  Even though I'm in Central California and you would think there would be good internet service, I'm apparently in no-mans-land!!!

Heading off to the big city of Turlock looking for a blood pressure cuff today.  The doc said mine is higher than it should be and I need to start keeping track.  RATS!!!  To top it off, those two pieces of candy nixed my diet for the last four days.  I gained half a pound back.  I'll be back on track for a couple weeks now, so we'll see how it goes.  If I didn't feel so much better at a lower weight, I'd give up all this nonsense and just enjoy the ice cream!!!