Snaps Can Be Dangerous!!

This is WAY too early for a retired person to be up and on the road!!  Day two of the cleanup began at 0-Dark-Thirty as I drove to the ranch before the sun came up.  I wasn't alone though ... the silage trucks were already on the road as was the local skunk population. 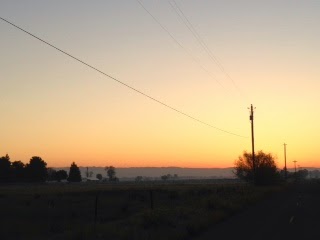 Surprisingly, I moved my shoulders around and discovered I wan't very sore at all.  We are finally in front of the barn and quonset hut, about 50% done.   Cowboy Jaime and I began to tackle the worst part with gusto.  We quickly found out what looked like the ground level was actually two feet deep of leaves, berries, grass and about 30  fence posts.  As soon as I dug up one, I saw part of another ... and another.  Just when I thought I had them all, there were 10 more.  Will this never stop???  We found old saws, pieces of metal chairs, beer cans and harrows (farm equipment). 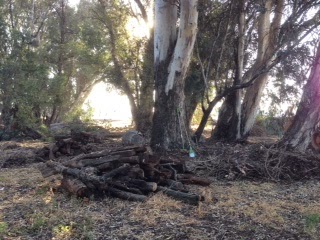 Today being a new day, there were new people at the County Dump who decided we were no longer dumping wood, but trash.  The trash IS wood, isn't it??  But they weren't having any of it, and each load ran $250+!!  It didn't take long to be over my budget, but what's a girl to do??  It HAS to be cleaned up if the place is to be sold, so I told them to keep on trucking!! 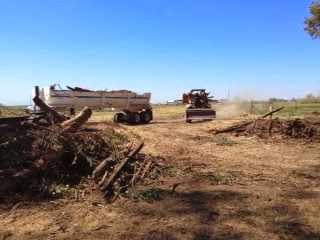 If you're the least bit squeamish, rotten logs buried two feet deep in tree trash won't be your favorite thing to dig up.  There were more bugs than you could shake a stick at ... which I did, many times.  Finally when the truck driver saw me dancing around getting the creepy crawlies off my hands and arms, he brought a pair of gloves for me to wear as he grabbed a BIG bug from my neck!!  See ... there ARE nice guys in the world!!  They're just all married, as was he and my Cowboy Buddy!!!

I'm not sure what kind of spider made this nest, but it was pretty cool.  My little i-Phone didn't really do it justice, but with so much dust and mold in the air, I didn't want to take my "camera".  When the boss brought out dust masks for us to wear, I stashed mine in the truck for the next trip to Bingoland!!! 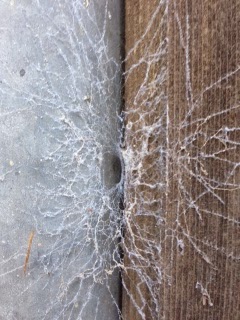 I took a couple breaks to rest a little, since it seemed I was wearing out.  That was a big mistake because it was then I found out the time was only 9:30 am and not noon like I thought!!  UGH .... back to raking!!  About that time we were using the chain saw to cut down small branches, which I grabbed, turned and hauled off  to the "new" pile.  Just as I turned, one branch snagged my shirt and before my brain could process what was happening, every single snap on the front ripped apart.  YIKES!!!!  NEVER wear a shirt with snaps when working with tree branches around a bunch of MEN!!  At least I was facing the street, away from the crew, but can you imagine my embarrassment as I frantically tried to reconnect them with gloved hands, while not dropping the tree limb ... acting like nothing had happened?? 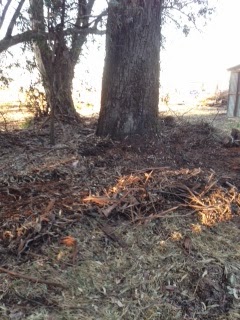 This is the BEFORE picture of this area.  By now I was starting to hurt a little.  Those 50 pound pieces of concrete and all that bending over was beginning to get to me.  I headed over to the truck to see if I might have an aspirin or two.  Thank goodness I found a small bottle with five pills, only one of which was recognizable.  I didn't care one bit ... I downed the four remaining with the last of my water and collapsed against the truck.  I don't remember this work being so hard when I was a kid!!!  The truck driver's wife brought a large pizza to the party and I said screw the diet ... I'm eating!!!  It was WONDERFUL!!!!!  Recharged, we were back at it in 15 minutes!!! 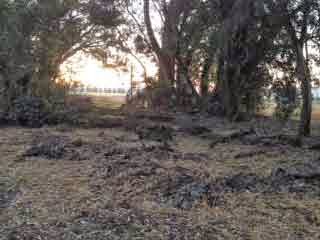 Pretty amazing change, right???   There are still many piles left to be hauled off, but we ran out of time and my pocket ran out of money.  What's left is mostly small green limbs that I'm hoping my gardner will haul off.  All the concrete irrigation pipes are gone now and one of the kids that showed up to help us, will haul the metal off ... hopefully today (I won't hold my breath however .. he's a kid after all!!!) 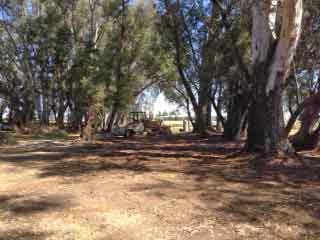 More aspirin last night didn't even touch the sore and achey ... I was awake most of the night.  This morning the sore, achey and tired is all that occupies my mind, knowing that tomorrow will be worse .. it's always worse the second day ... so if you need me, I'll be laid out on the couch!!!

Posted by Nancy Kissack at 7:38 AM