After several hours of hard rain that disappeared into the dry ground in a flash, the clouds moved on and we are back to cold and dry.  I suppose that's a good thing for me, since I need to get to work on washing and waxing my RV.  UGH!!!  NOT a job I'm looking forward to.  I planned on having it done in Yuma, but I was so sick I just didn't get it taken care of.  I had lofty ideas of doing half of it at a time.  That has now been reduced to one quarter at a time.  By the end of the week, I figure it will be down to one eighth!!!!

For those readers not in the group, here is the Dream Ice Cream Team of wonderful folks, every one of which participated in the Ice Cream Social distribution in Indio.  The Golden Spike Group RULES!! 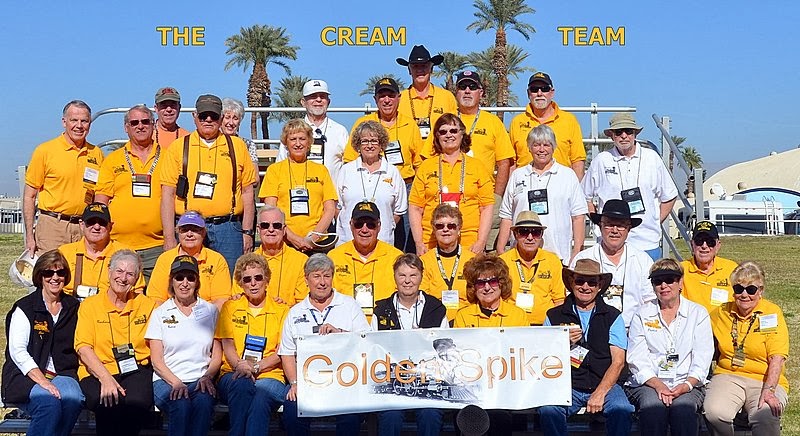 This is me hugging the Schwan's truck when it first arrived.  That's one happy lady standing there!!  These images are copyrighted by Bob Tucker, official photographer and slide show author!! 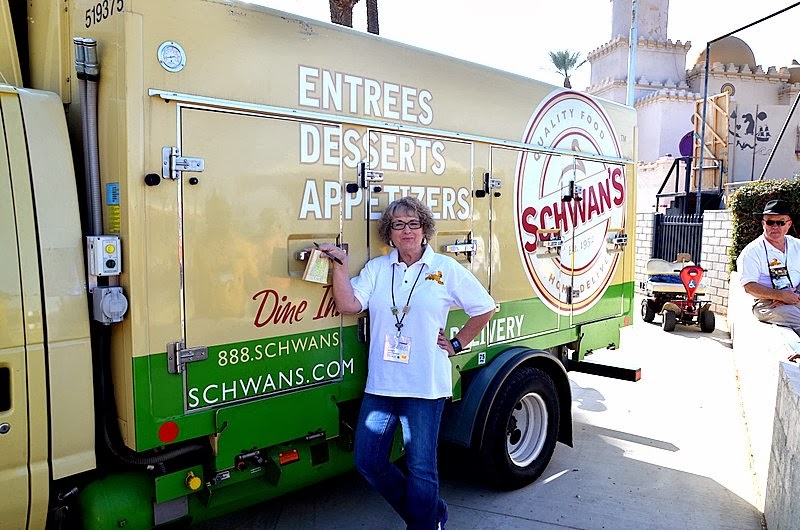 You've heard me talk of the wagon wheels we purchased, here's mine on the patio next to my milk-can table.  I don't know where the seller found it, but it is in excellent shape. 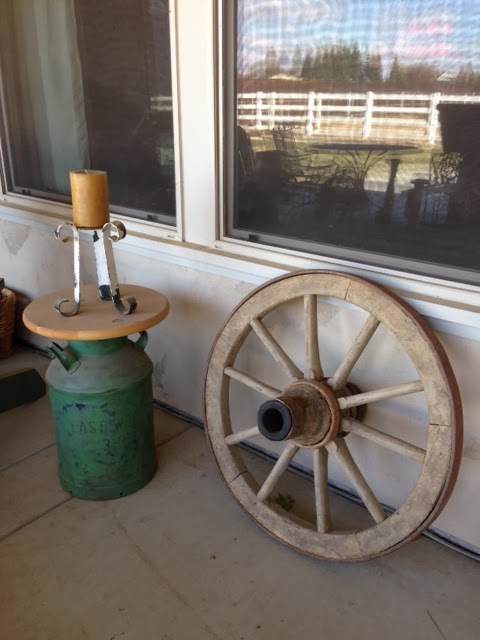 This is what was in the box of chicken ... my Rooster!!  Isn't he just gorgeous???  Well, only if you like roosters I guess.  We had lots of these guys when I was growing up on the ranch ... I was the egg hunter, gathering eggs after school every day, so he kind of has a place in my heart.  These are extremely hard to find this large with such good color and I've seen them go for many hundreds of dollars.  At Cracker Barrel, he was a steal!! 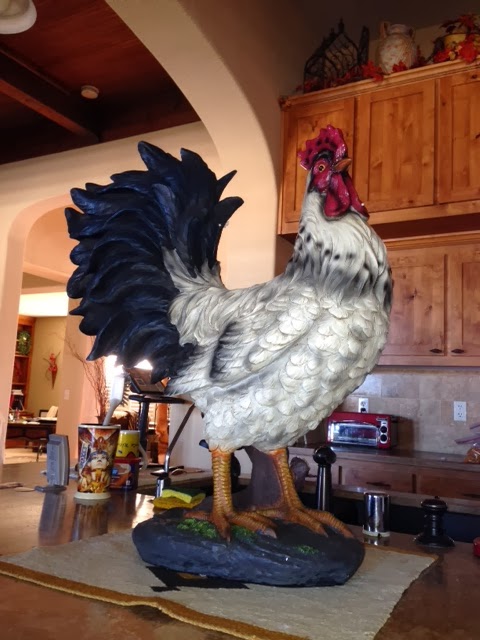 The cranky old lady in Quartzsite had a huge stack of reclaimed tin ceiling tiles that I went through one by one.  I really wish I could have found several more of this particular pattern, but had to settle for just one ... which she did NOT discount!! 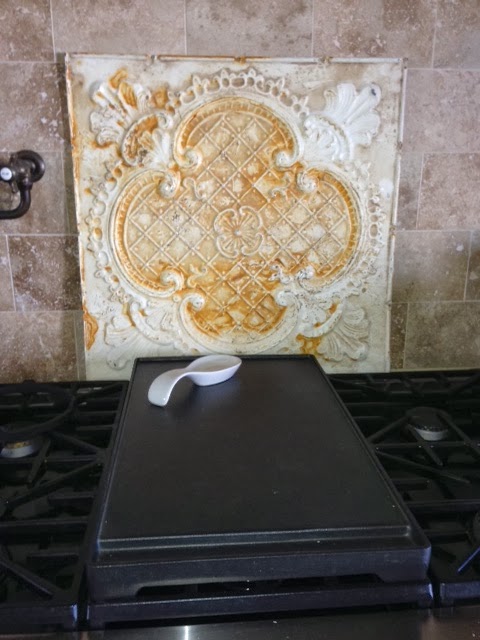 I spent four hours yesterday vacuuming both the Jeep and my truck, then washed the 3/4 ton extended cab monster!!  I'm NOT washing the Jeep ... at least not personally.  The dealership where I purchased it, gives me as many free washes as I want for the life of the vehicle.  Of course they don't do a spectacular job, but it's much easier to clean up the details than to wash the whole thing.

A day can't go by ... what am I saying ... an HOUR can't go by that I'm not REQUIRED to throw the ball for Cooper.  He holds it with his paws, then pushes it with his nose in your direction.  You throw it, he gets it and comes back to this spot ... he pushes it ... and you know the rest.   An hour later, I haven't accomplished anything!! 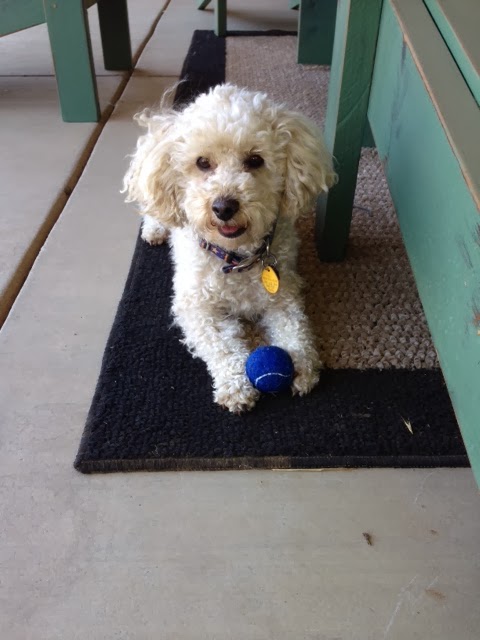 I did get some flute practice in ... you didn't know I played the Native American flute???   SOME people might say I DON'T play the flute, at least not very well ... but it's fun to try anyhow.  The largest one on top is my favorite High Spirits E with very low tones ... it came from a trading post East of the Grand Canyon.  The middle one is a G, sold to me by none other than Miss Patty Chance when she worked in the Grand Canyon.  The lowest one with turquoise beads is the newest F# from Quartzsite. 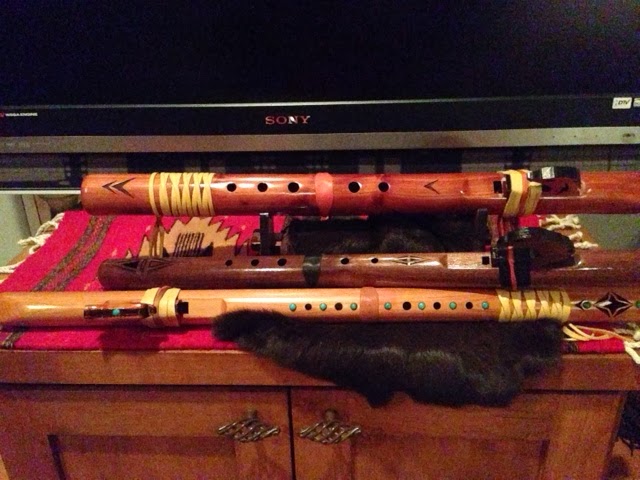 So the next time we are in the same general area and you hear lots of screeching along with a few beautiful notes, no worries, it's just me "playing" my flutes!!