The Cat In The Hat came visiting yesterday, and although I DO know about green eggs and ham, I have no clue what the rest is about.  I was born before the Cat was ... in fact I think I was born before books were made, because there were no such things in my childhood.  I didn't learn any more yesterday either, as I was busy taking pictures of the birthday boy, Braden James!!  Here he is with Mom and his new Godmother!! 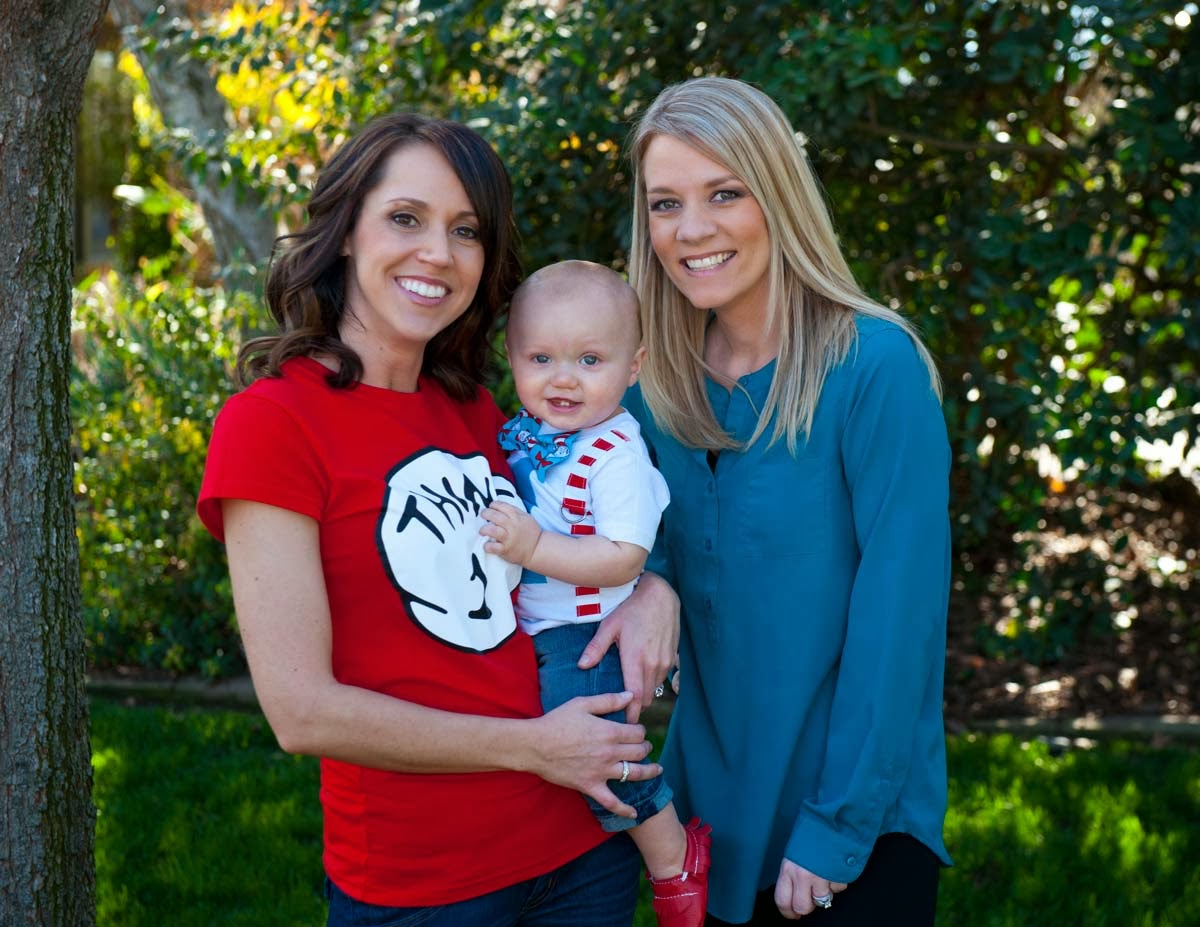 Gee ... I remember about birthdays ... there was homemade cake and one gift.  Braden had an entire cake to himself and got THREE ride-on cars and one ride-IN car!!!  Now that's a haul worthy of a king!!!  As you can tell, Mom has been planning this party the entire year.  Once a month, she put him on the couch with a white shirt and blue tie for a photo op!!  That's what you see strung over the table. 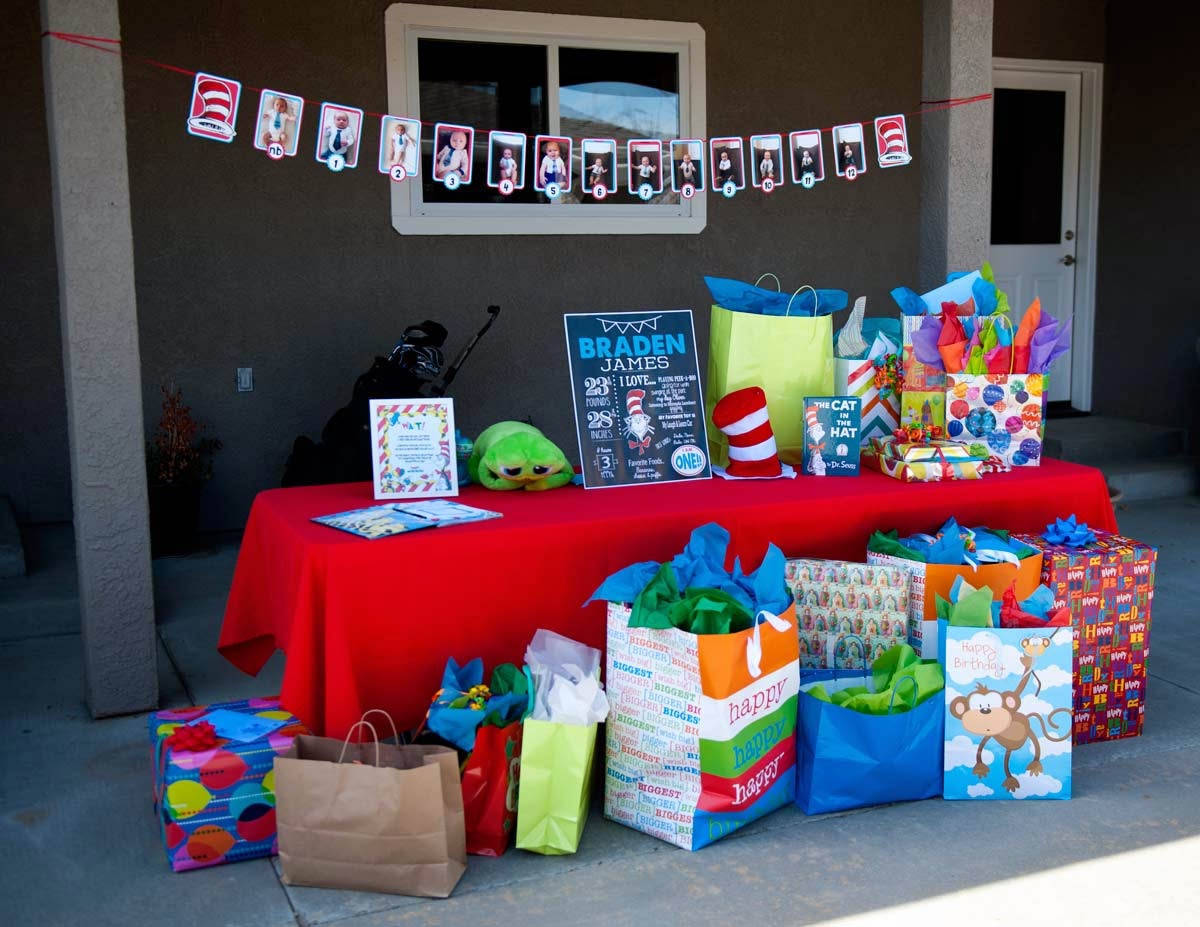 I seriously don't know where all this stuff came from ... I couldn't even find Cat-In-The-Hat wrapping paper ... but this sign was a winner.  It says he has three teeth, loves bananas and his first words were Dada and Nana.  Pretty cute!! 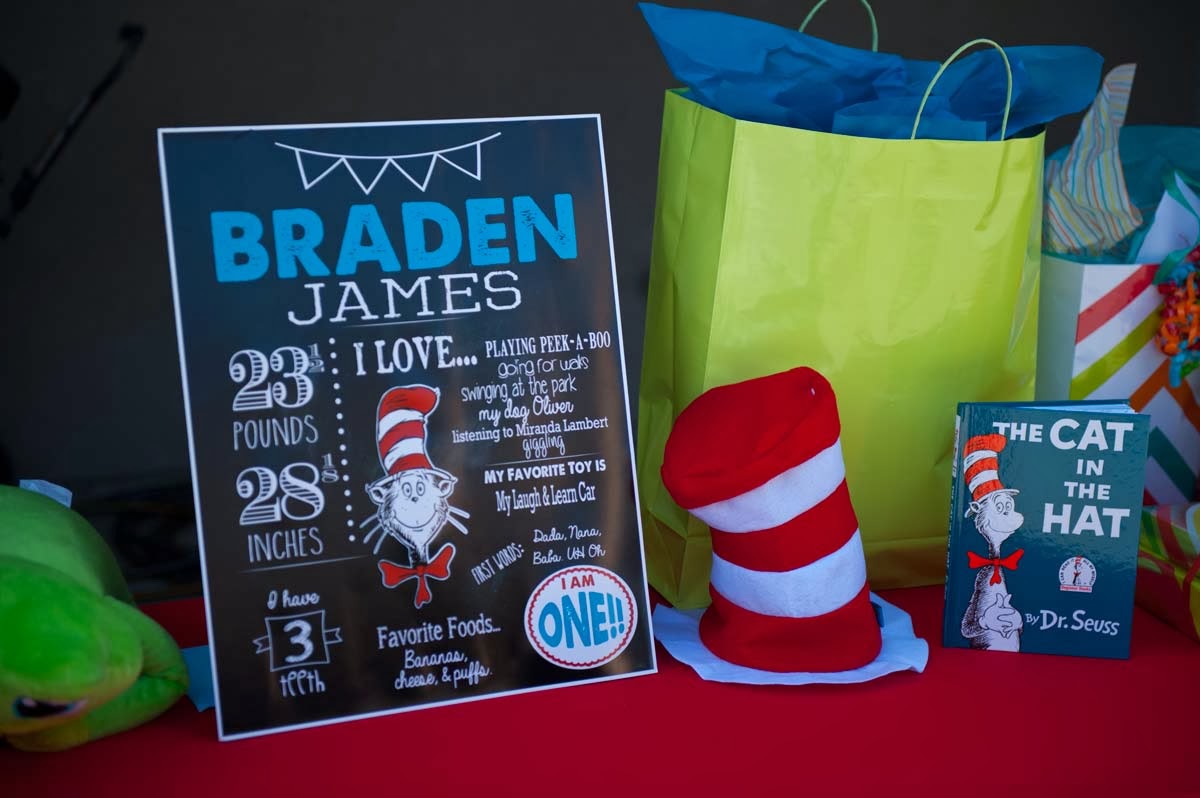 There were cardboard cutouts everywhere of characters from the books.  Guess I'll have to go buy a set if I want to know what was REALLY going on!! 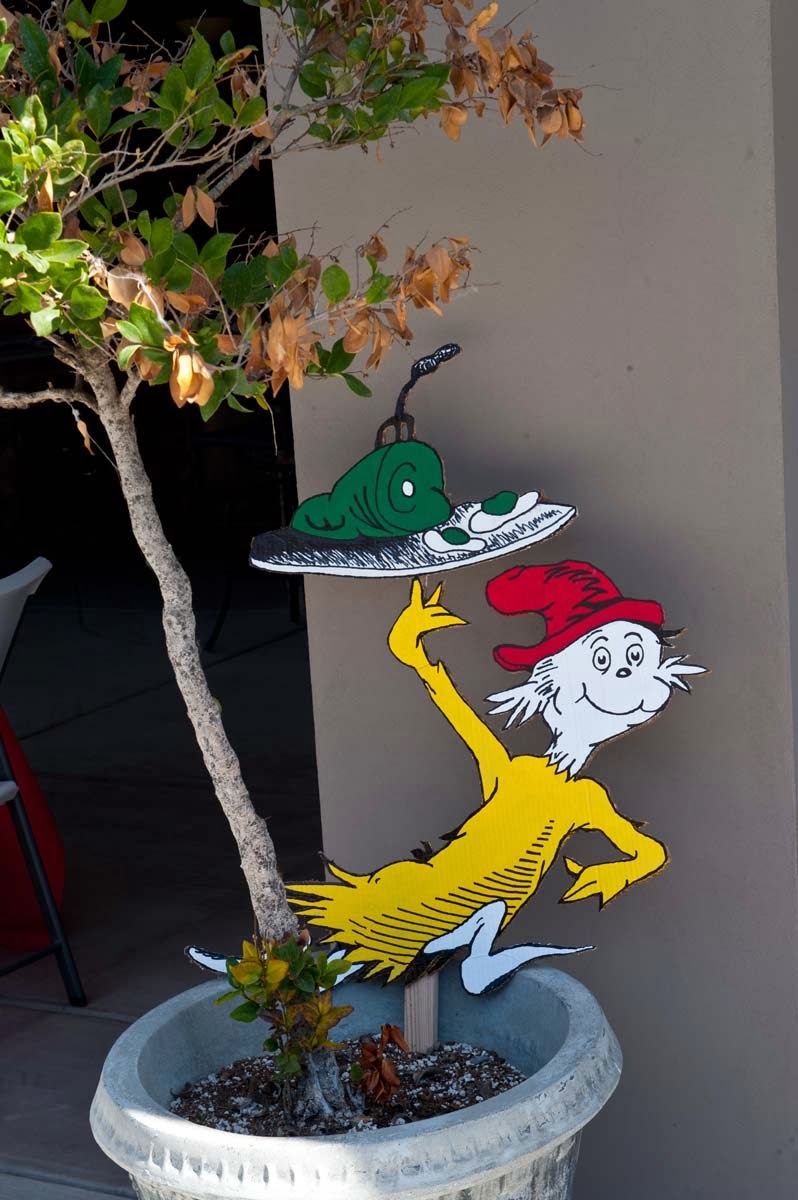 The green eggs didn't go over so well but the ham and cheese disappeared pretty fast.  It's hilarious how our brain interprets the color of the food we eat.  They didn't taste like deviled eggs at all!!  I surprised my office one year on St Patricks Day with green potato salad, made with a few drops of food coloring in the mayo dressing.  Even I knew it was regular potato salad, but my brain kept getting in the way when I saw the green color.  Everyone tasted it, but most was left on the table!!  Try it some time!! 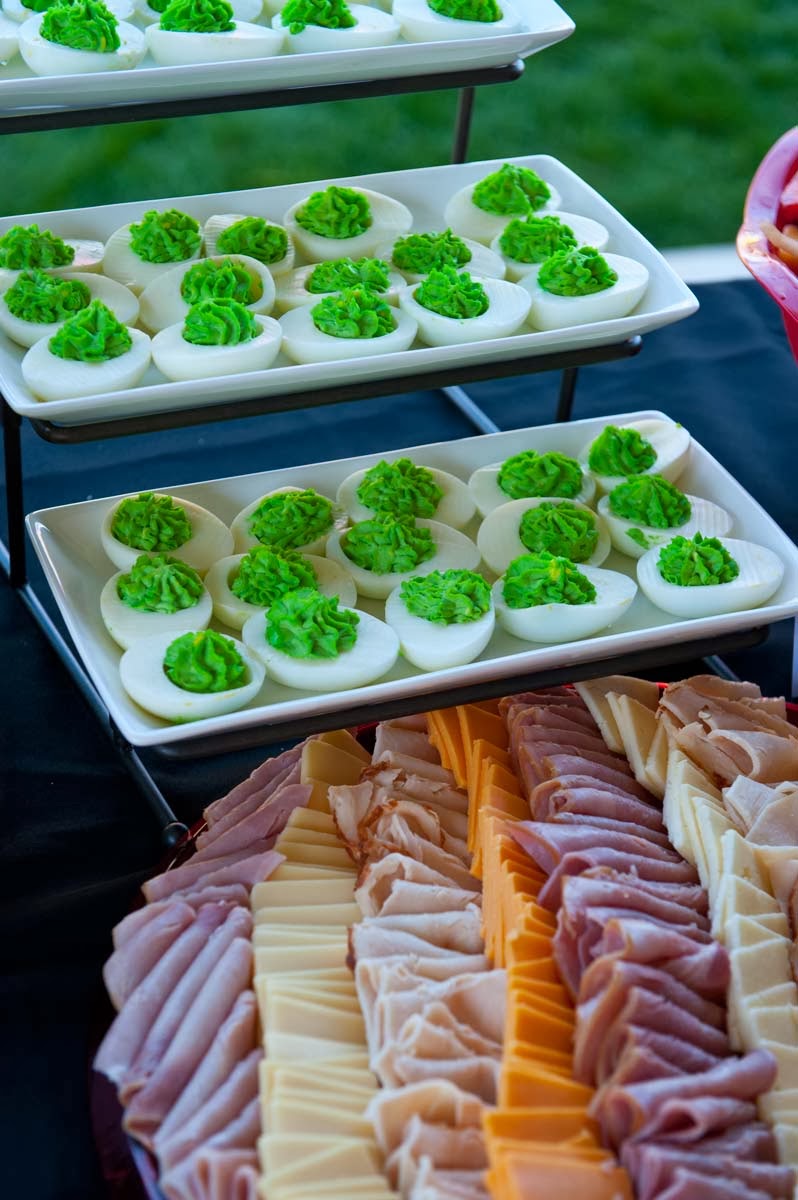 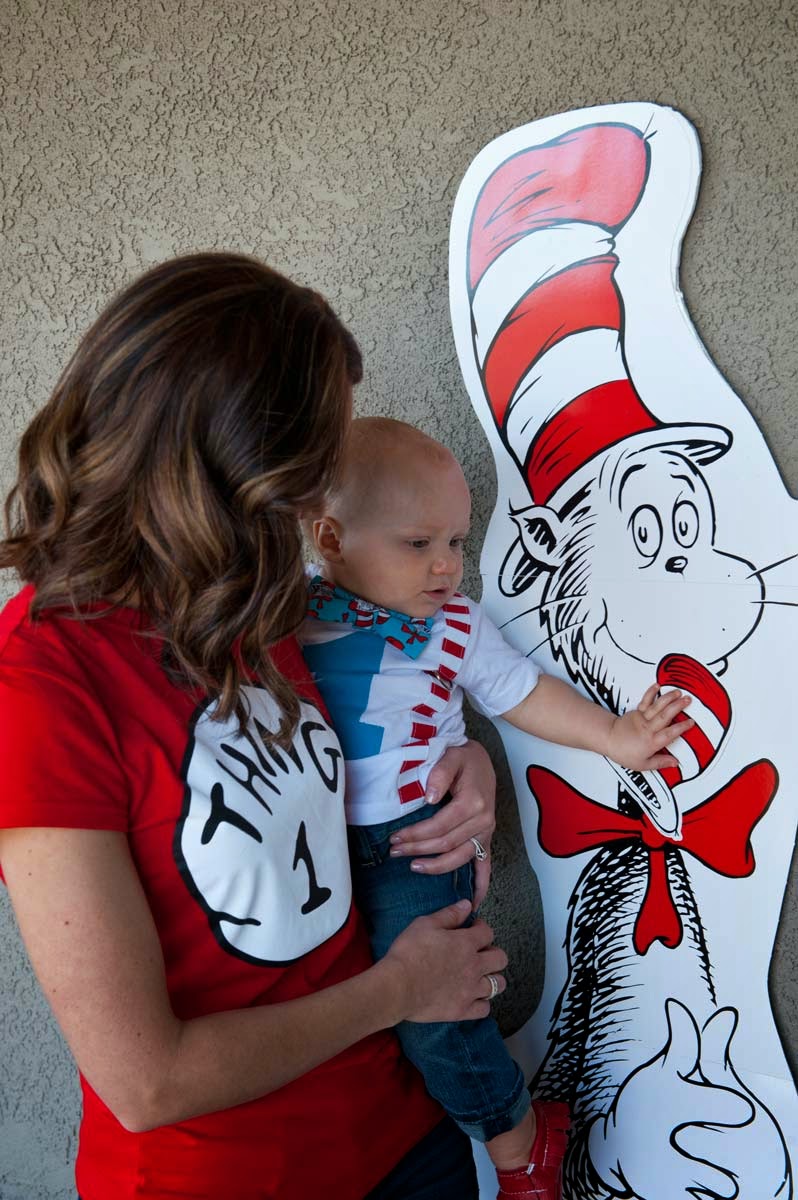 And THEN came the time to sing Happy Birthday.  They put a big candle on the cake, which he went for immediately, and when Shelby blew it out, we all cheered, sending him into a fit of crying that lasted five minutes!!!  I'm not sure where the custom came from of letting kids destroy the cake, smearing it all over the table and of course themselves, but they let him have at it for fifteen minutes or so.  What was left, went in the trash.  That's not MY kind of custom ... I wanted to EAT the cake!!! 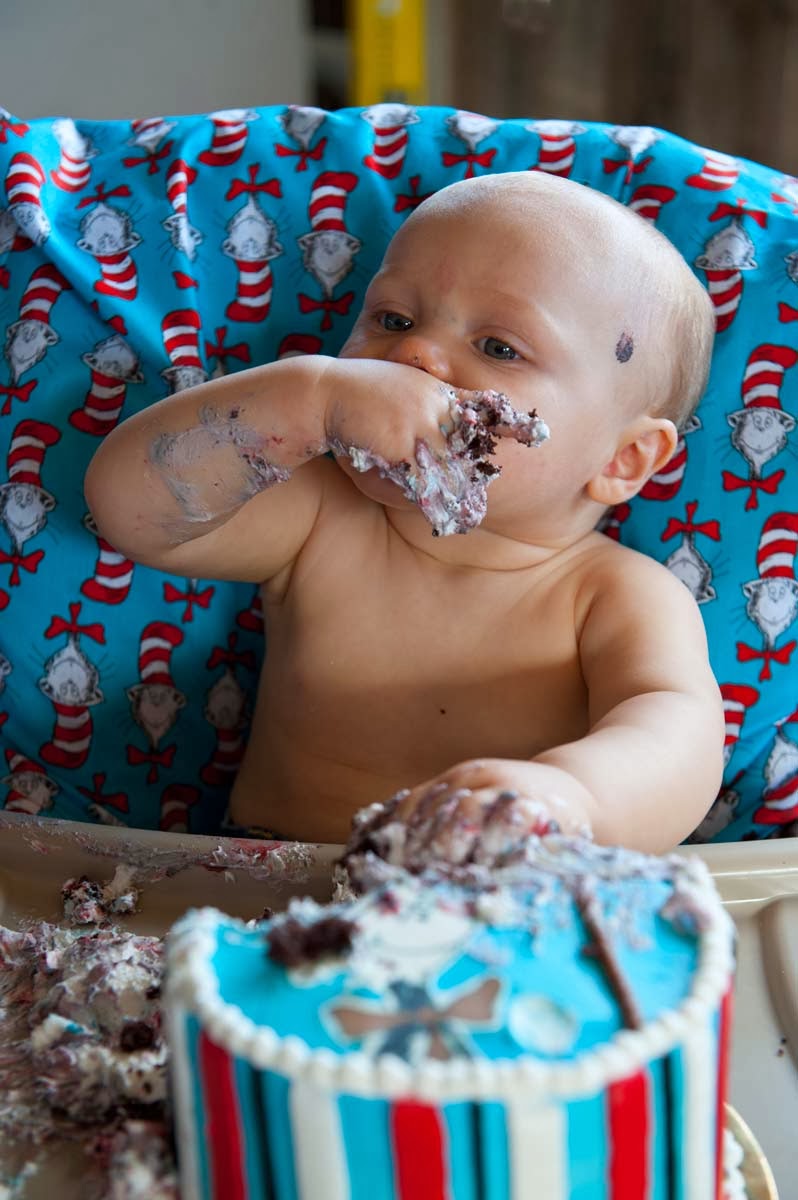 I have to say of all the gifts he received, Mr. Braden played with mine the most!!  See that water bottle???  I wrapped up TWO for him with just enough water inside so it would roll on the floor.  When we were taking the Chef pictures of this little guy, all he wanted to do was crawl on the floor chasing after a water bottle.  I didn't have any toys to play with and figured my dogs liked it, so maybe Braden would too.  It was a big success!!!  The rest of the bag was filled with clothes!!! 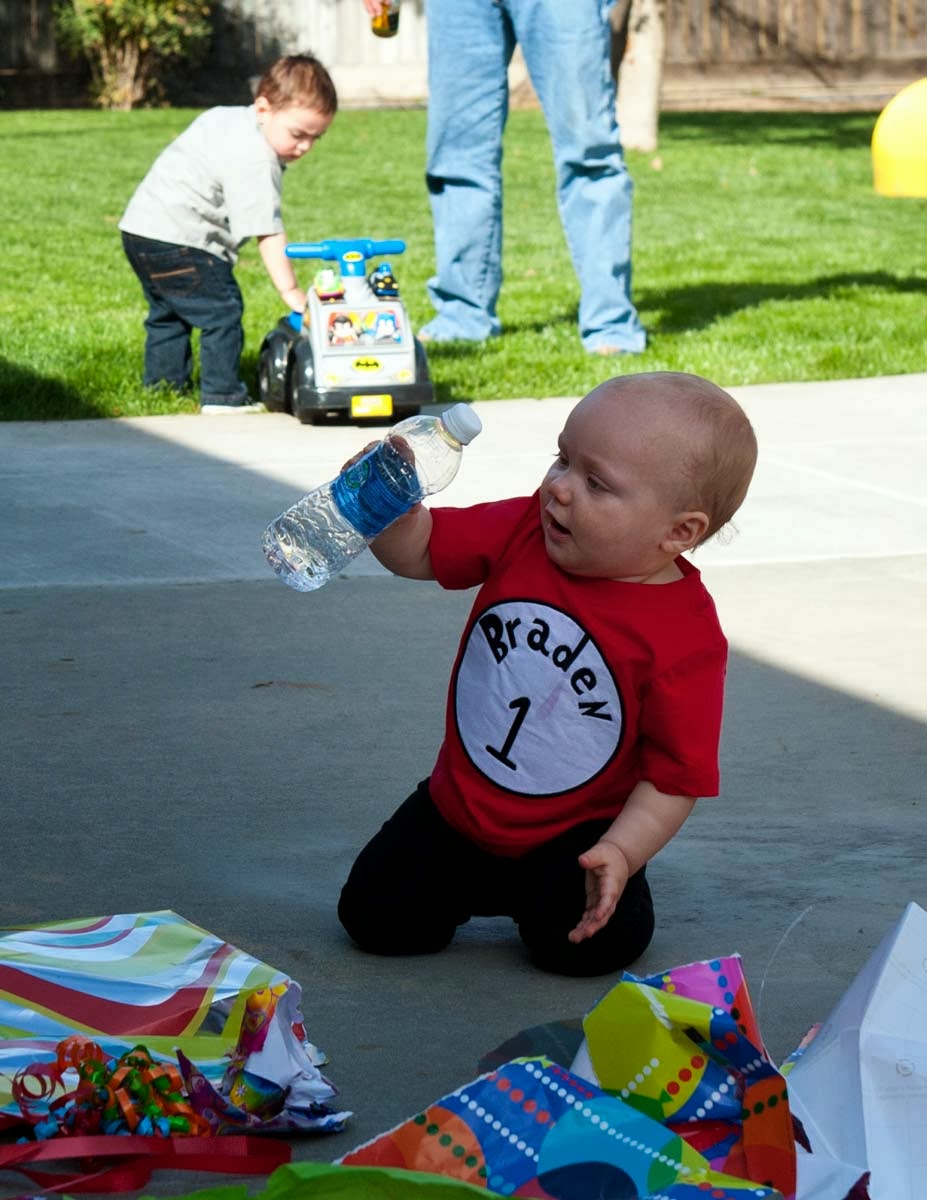 It took an hour to clean up the mess and haul off all the presents he received before the stomach ache and tears hit again (from the gobs of frosting he ate).  Thankfully I don't have to change any of those diapers!!  Happy First Birthday Mr. Braden James!!!