I was off in the freezing morning air after getting bit by Jonathan.  Yes, he bites the hand that feeds him.  He wasn't the least bit happy about being dumped in that big cardboard box for the trip to the cage in the rig.  Add to that the chill in the air, and he was having none of it.  My finger will heal, eventually.  OUCH!
The first stop was for fuel, just a couple miles down the road.  It's always refreshing to get 40 gallons of diesel for a measly $2.29 a gallon.  In California that would be $3.70.  Don't you just wonder what they do with that money?
I waved to Jan and Bill as I passed through Casa Grande and headed up the first big hill.  My rig purred like a baby.  Sadly, the camera battery died after one photo.  RATS!! 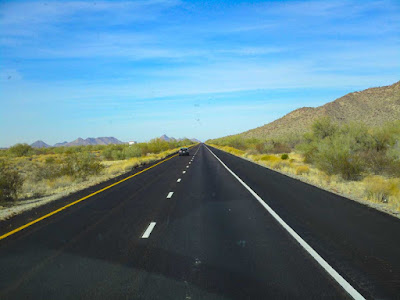 In no time the puppies were due for a break.  It was still pretty chilly, so it didn't take them long.  They weren't interested in the cold air either.

At Gila Bend, I was heading into new territory.  I've never driven this stretch of Highway 8 before.  California should take note.  These were the smoothest roads I've been on in some time.  Maybe because they were just recently rebuilt, but even the rough spots were smooth comparatively.

One more pit stop was in order while I called my "guy" to get better directions for that oil change.  I thought I had it in the bag.  Turns out, it had fallen out all over the floor.  I landed on the side of the road next to an Urgent Care (something he never mentioned) and waited for twenty minutes.  Finally I put in another call.

He came a few minutes later and I followed to the appointed spot, no where NEAR where I was.  At least the weather was much warmer when I stepped outside.  I'm sorry I didn't take pictures, but I was so entranced with the WARM that I completely spaced out.  Could also have been the five hour drive.

60 Minutes and a check later, I had new oil and all new fuel filters, along with greasing whatever needs to be greased.  Can you imagine, a mechanic who comes to where you are to service your rig?  He's one in a million.  Too bad he's married.  I can tell you that there was not one single drop of oil spilled anywhere.  He even picked up one tiny drop of grease.

I'm good to go for another year, so off I drove to the Palms RV Park where I'm staying.  I like it here because they have 24 hour security at the front gate.  At last I got to see Ray, Cindy and little Miss Penny. Penny jumped up in my lap and made herself at home.  My heart melted!

I dropped off three bags of fabric scraps that made Cindy's eyes light up!  She's the quilter extraordinaire that uses pieces as small as one inch to create masterpieces.  Me .... I have to have pieces I can actually SEE!!

At long last it was time to hit the hay ... I was pretty tired from driving.  I was offered half of a spaghetti squash already cooking in the oven.  Who could turn THAT down!!  I don't know what they used for spices, but it was WONDERFUL!! 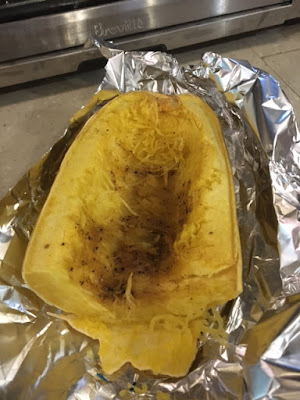 Early this morning we are heading across the border.  It's open from 6 am to 2 pm every day.  Most of the shops open at 8:00 so we'll be at the door waiting.

Posted by Nancy Kissack at 4:44 AM