From Bakersfield to home in Central California, my point of view was obscured the entire way.  It's springtime.  What do you GET with springtime?  BUGS!!  Millions of bugs.  It might have helped would I have taken the time to wash them off, but I was facing into the sun.  If you've ever tried to wash a nasty windshield while facing the sun, you know my lack of motivation.

So far on this trip I have been surprised by the plethora of vehicles on the highways.  I thought California was in some kind of lockdown.  After all, that's why we have had so few deaths with Covid19, right?  Well that's probably wrong.

Now they are saying it's because the virus has been in California since October or November and we have achieved antibodies.  Possibly that's because the Greyhound Buses are still up and running.  Those totally enclosed petri dishes of cleanliness are still roaming the State moving people all over.  So why am I forced to stay in my home under threat of arrest because my neighbor called in to say I was out walking the dog? 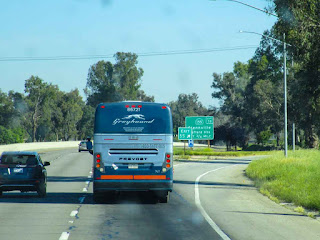 Your mind wanders when you're driving.  I'm wondering why this project is still under construction when California was in crisis over no ventilators.  This is the bullet train crossing over the San Joaquin River, costing billions. 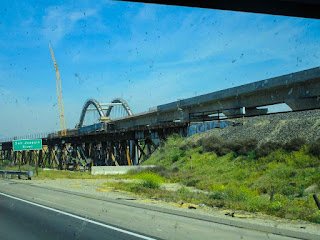 You can see where it ends, just on the other side of the REAL railroad tracks.  Talk about another petri dish!!!  Now they will be able to spread disease at lightning speed, or at least some time maybe 20 years in the future when it's completed. 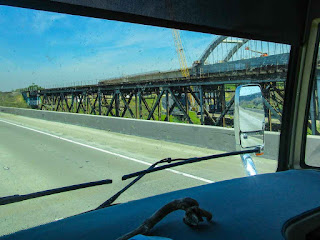 Remember Madera?  How we waited for that construction to be completed?  Well after maybe two years, it's now ALL under construction again.  I think the bugs were starting to get to me.

There was so much traffic, I hit several traffic jams coming to a complete stop.  Here I've tried to be good and not travel or go out much at all.  That just ended.

Here's a story that should scare you.  My friend really needed a haircut.  He asked his long time friend to meet him at the shop and give him a quick cut.  She agreed, although they both snuck in the back door.  Someone walking by saw them and called the cops.  Luckily one of her friends called to warn them so they could sneak out the back door, just as the cops arrived.  I kid you not ... true story.

That's IT!!!  I've had enough of this crap.  If they can open the golf courses in San Bernadino County and keep the Greyhound Buses running, they can open everything else, just remind people to keep their distance.  We have already given up WAY too much of our freedom to government control.  Think about it ... do you want to be the one arrested for going outside?  I would rather die from the virus than give up my freedom.  Alright, enough of that. 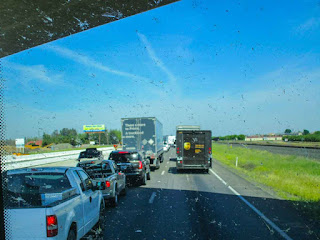 By the way, has anyone heard from the movie stars or the Clinton Foundation or maybe the Obamas?  How much money are they donating to people who have lost their jobs and probably their businesses?  My plan here is to buy once a day from a closed restaurant ... especially the local owners.  It's not much, but maybe it will help a little.  So no cooking for me!!  Yay!!

My house is still standing and my lawn is green.  What more could I ask for?  Oh ... and there are no rattlesnakes crawling across the driveway!!  Life is good!!  Except for that part where I made ten trips to unload the rig and still have at least six more to go.  I better get to it.