Alas, there are not many cooking successes in my kitchen.  Even though they are few and far between, I continue my attempts for two reasons.  Well maybe three.  First, it gives me something to do besides watch television, especially now when we're supposed to stay home.  Second, it actually is cheaper than eating out or having my second choice, Lean Cuisine.

For three, my Mom was a GREAT cook.  She was so good at cooking she had her own television show in the 50's before it was even a thing.  I would sit in the corner while she cooked on a stage made to look like a real kitchen.  I kid you not, it was a BIG deal.  Naturally since we raised cattle, there was always beef involved.  She fed the entire crew once a week.  Now you know my shame at having a cemetery in the back yard.

Occasionally however I do have some success.  Here's one of them.  I made hundreds of tortillas for our construction crew back in the day.  That's because they were all from Mexico and they showed me how.  Mix up flour, salt, lard and water with just a tad bit of baking powder.  Knead it for a few minutes, cut and roll into little balls.

Yes I do use lard.  Pork lard actually gives them the best flavor, but my second choice is Crisco.  It works just fine and they taste great. The trick is to let it sit for twenty minutes so the dough can relax.  That's when the guys would have a beer!  Roll them out on a floured pastry cloth.  REAL tortilla makers use a sort piece of wooden dowel for rolling.  THIS one is a piece of marble from a quarry back East that makes headstones.  Appropriate since so much of my cooking ends up in the cemetery!!

I can only thank Tom Westerfield for this.  When we were back East, he found it in the very back of the shop where they sold huge slabs of marble for things like making candy on, mortars and pestles, that kind of stuff.  It makes rolling tortillas easy as pie. 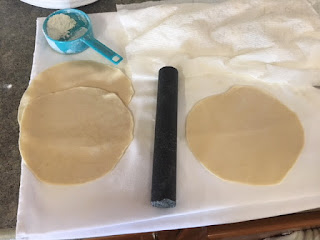 Then comes the cooking.  Just throw them on a hot comal like here or in a cast iron frying pan.  They will puff up and acquire beautiful brown spots. 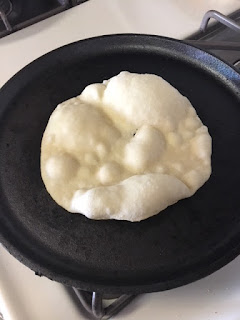 Flip them once and VOILA!!!  Homemade tortillas, much tastier than the ones you get in the store.  So there you have it ... finally ... a cooking success. 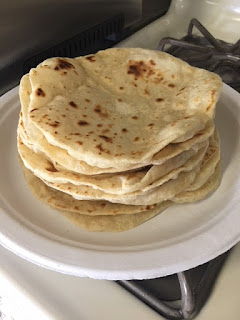 By the way, after the beef and noodles sat in the fridge overnight, it magically acquired a little more flavor.  I had leftovers for lunch and it tasted MUCH better.  I've no idea why.

In the meantime, while being bored out of my mind, I finished this quilt top.  I tried to make the process last longer by only sewing so many seams a day.  My time here is getting short and I have to return to California.  Starting another project would not be good for my mental health when I lost half the pieces between here and there. 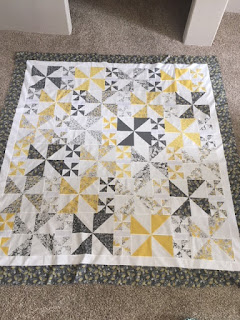 I'm definitely getting WAY too used to sitting the couch.  I think I will spend the day ripping out 118 more dandelions from my back yard!!  Happy Tuesday!!

Posted by Nancy Kissack at 6:24 AM