So there I was, just minding my own business at the Grand Central Mill.  The Grand Central Mine in Tombstone was one of the biggest.  It shipped it's ore to the mill near Fairbank, where it was loaded into wagons and hauled to the top of this hill.  There it fell down into the stamp mill, using gravity to help it along.

You'll probably have to click on the picture to make it more seeable.  It stretched over 200 feet down the hill, with steps on one side.  I of course, wanted to go up the steps.  I was very cautious, having spent many hours in my younger years trying NOT to step on rattlesnakes.

I heard the slightest rustle in the weeds and froze.  This guy came right for me FAST turning at the last second and heading along the rock wall.  I yelled at Doug and Yuma to watch out.  SNAKE!! 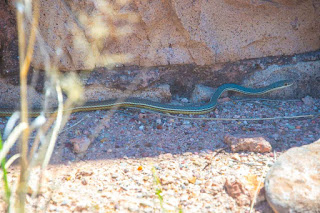 He was probably four feet long, one of the fastest snakes I've ever seen, but alas, not dangerous.  He stopped long enough to pose for us and was then off.  In spite of my wish to climb higher up into the mill, I heard more rustling in the bushes and figured I better get out while the getting was good. 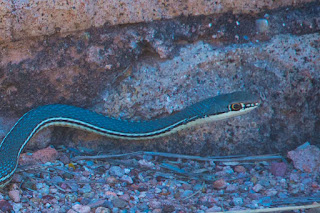 The trail started out nice enough and within one mile we found the cemetery.  Turns out, it's a bit further off the trail as we climbed up to the top of a hill with a great view. 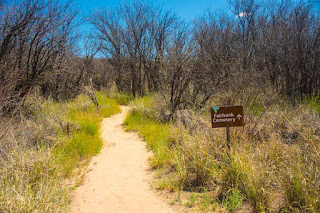 It didn't take long to find the gravesites.  Apparently most everyone was buried pretty much above ground and covered up with big rocks, just like you see in the old movies.  Who knew? 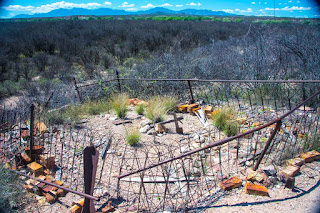 Overall, it's in terrible shape.  I rather imagine souvenir hunters have taken most everything important.  This is Mary Nelson McCullar, wife of A B McCullar, who died in 1899. 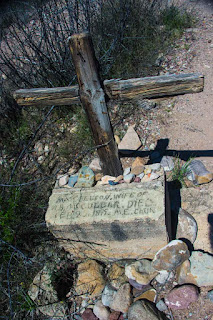 In the entire cemetery we could only find two names, the other being Angelita Andrada, 1919.  This must have been someone very important to have a steel fence, but there's no indication of a name. 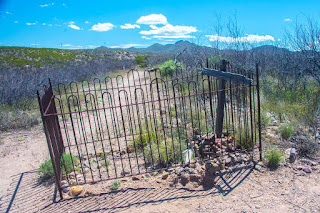 One of these days I may just go back and tidy up the place a little.  It's sad to see the disarray. 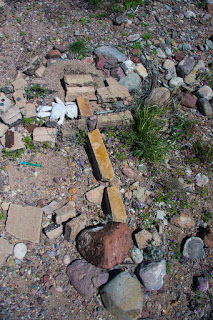 Oh look .... a cute little caterpillar.  Doug tried not to step on them.  We saw just a couple here and there as we left the cemetery. 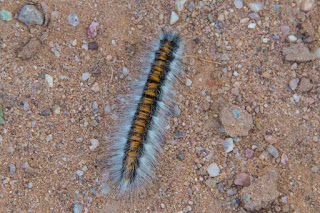 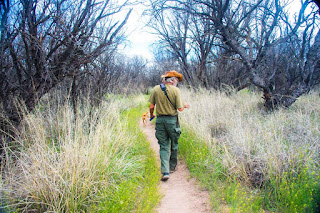 Another mile down the road is where we found the mine ruins.  The snake pit is to the left corner.  Those rock walls are very thick, with many of the rocks looking hand cut.  It must have been an amazing place to see. 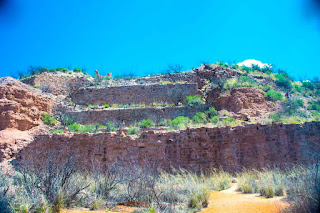 Little did we know, it continued on down the hill behind us.  There we found lots of used brick piled up from where they tore out all of the equipment.  These bricks say made in Los Angeles. 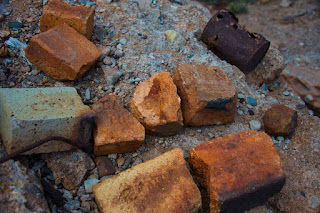 This was the furthest end of the stamp mill.  Now the decision became do we turn around and go back the same way or continue on around the loop.  We chose badly. 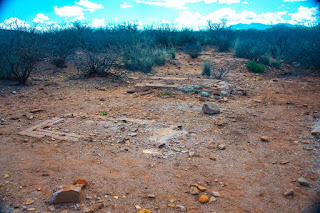 As we wandered down the trail that kept looking like it was heading to the river, although it was not, we found another Grand Central mine.  It has a barbed wire fence around it, as the sides are sloughing off into the chasm below.  Huge timbers have fallen down and covered up the entrance.  Well that was interesting ..... as we kept walking. 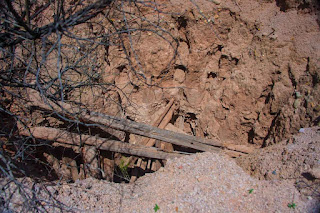 That's weird, we started seeing more and more of those caterpillars.  Like aliens from another world.  Pretty soon there was no way Doug could keep from stepping on them.  Little did we know what was coming!!

Quite of bit of water was running down the San Pedro River, a beautiful setting to relax and soak our feet.  We calculated we still had two miles to go. 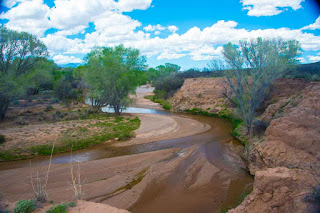 The river runs very deep, with access not really possible for quite a ways.  At long last we found a trail down to the water's edge. 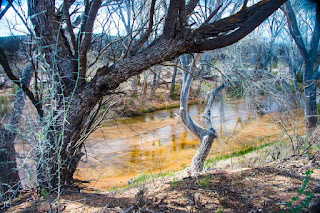 OH MY GOSH!!!  That's when we began to notice the caterpillars for real.  Let's sit on that rock and take our shoes off ..... NOT!!!  It was covered with the alien things!!  The river was full of them and there were so many in the sand that we probably killed 25 for every step we took.  I kid you not, they were COVERING the entire area.  I was beginning to get creeped out. 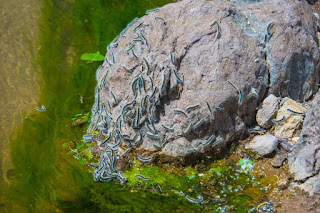 Back up the side we scrambled to the trail, only to find this guy.  He's huge, about 1-1/2 inches long, big enough to suck your brains out.  He hid, but Doug was able to uncover his hiding place.  Suddenly I saw another ..... and ANOTHER!!  Then I heard all the rustling in the grass like you wouldn't believe!  Okay ..... I'm OUT OF HERE!! 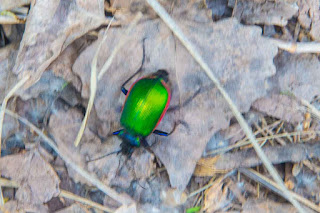 About half way on the return trip, we looked up to see these "nests" in the trees.  AHA!!  THAT is where the aliens laid all their eggs.  Those are caterpillar nests.  Thousands of them!  Worst of all, I kept having to tell Doug to stop as I brushed several off his back.  He even found one hanging down on this hat that just wouldn't let go. 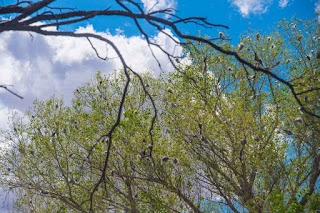 By now we're both pretty tired, thinking this little four miles hike has been at least EIGHT!  We headed uphill to the railroad track, hoping it might be an easier hike to the finish line. 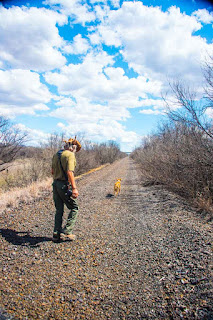 At long last, we made it.  That's the highway ahead.  I had given most all my water to Yuma, so what kept us going was the thought of water in our Jeeps at the finish line.

The thought of those caterpillars still gives me the creeps.  I was just praying I didn't find any in my hair!!!  There would have been some of the worst dancing and screaming you've ever seen!!

Here's the link for Doug's Blog so you can check out his pictures too.  Luckily I recovered quickly without the soreness I expected.  I'm ready for another adventure ... and today is the day.  We're off to the little town of Ruby Arizona.  Please let there be no bugs!!