Good Morning America!! I'll let this picture speak for itself.  Happy Easter everyone.  I hope you enjoy your day, even if you can't be with family.  I'm praying this will be over soon and we can all get back together. 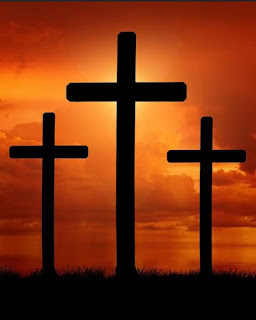 Before I get on with our tour of Ruby, I finally found out what kind of snake that was at the Grand Central Mill in Fairbank.  It's a Whip Snake.  They average 4-6 feet long and are fast as lightning (don't I know it) and travel with their head above ground.  Yup ... that's him alright.  The good news is they are not lethal nor venomous. 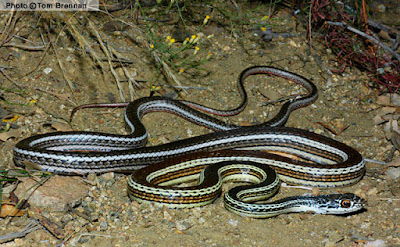 Back to our story, after driving for hours on gravel washboard roads, we finally found Ruby.  On the internet it said they were closed up tight.  When we arrived however, the sign said OPEN.  We drove right in, following the strange signs to the caretaker.  This was our view of the town. 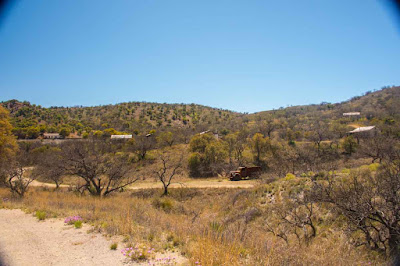 I think we're in the right spot.  That's Montana Peak on the left, for which the town was originally named.  It all began in 1877 when gold, silver and copper were found here.  The mining camp's general store was run by Julius Andrews, who in 1912 applied for a Post Office.  It needed a name, so he called it Ruby after his wife Lilly B. Ruby Andrews. 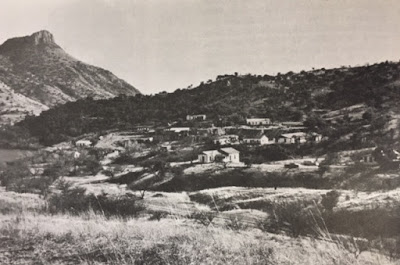 Originally built in the 1880's, the Ruby Mercantile was home to cattle rustlers and criminals, including Pancho Villa who roamed the neighborhood.  In 1914 it was purchased by Philip Clarke who built another store further up the hill.  It is said a Padre was buried there, becoming the reason for all the bad luck to rain down upon the little store.

In 1920 Clarke sold the building to John and Alexander Frazer.  Eleven days later, the Frazer brothers were shot and killed during a robbery.  The pair of Mexican robbers, Lara and Garcia were finally identified.  Garcia was later killed in a gunfight and Lara ended up in a Mexican prison for other crimes.

In 1921, ownership was passed to Frank Pearson.  He was well aware of the robbers in the neighborhood and kept guns everywhere, but it didn't help him when they entered his store and shot him and his wife.  His girls escaped and told authorities in Nogales.  The manhunt was on using a U.S. Army biplane, the first aircraft ever to be used in a manhunt in Arizona.  A $5,000 bounty was issued on each of the seven bandits.

Eventually over 700 people entered into the search, the largest ever in the Southwest.  The bandits were caught because they smashed Mrs. Pearson's face to remove 5 gold teeth which they used to purchase alcohol.  They were finally caught but escaped, then were caught again and hanged.  Well, all except one who escaped again and was never seen after.   Here's all that remains of the bad-luck Mercantile. 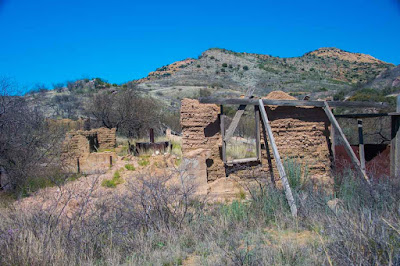 Mining of course, continued on a daily basis with about 300 men headed down into the depths of the earth.  The head frame of the mine still exists, although held up by cables. 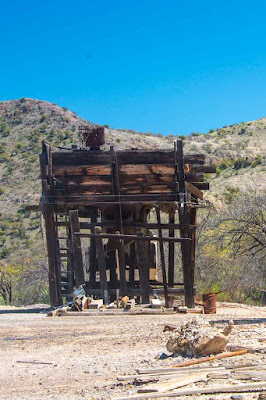 How in the world they could do this, I'll never know.  Probably because I'm a little claustrophobic.  This hole in the ground is over 750 feet deep.  Every morning they were lowered down the shaft and worked a full eight hours before coming back up.  What began as a gold and copper mine became a lead mine.  There were three shifts working 24 hours a day, 7 days a week. 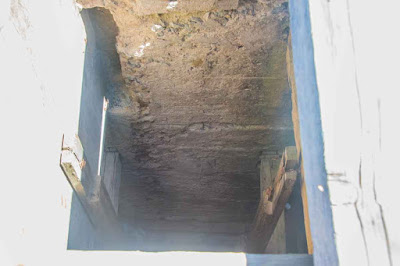 Today the mine is kept open because it's a nursery colony to half a million Freetail bats, that emerge at night.  Eeeeek!!!!!

The ore was processed on site with all the tailings and water ending up down below, creating a lake, but not one you want to swim in. 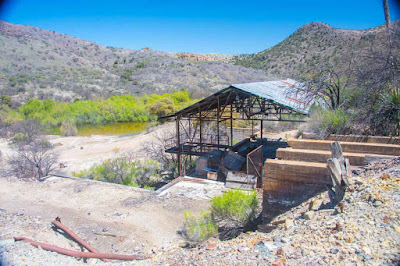 They used a ball mill and cyanide to process the material.  Big steel balls inside the turning chamber crushed everything to a fine sand. 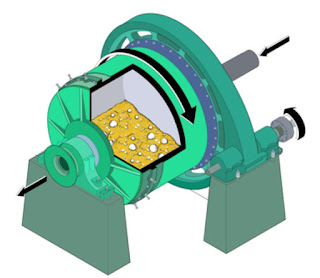 Right next door was the Assayers Office where Fred Gregory worked as a chemist.  He died in 1936 of cyanide poisoning.  No surprise there! 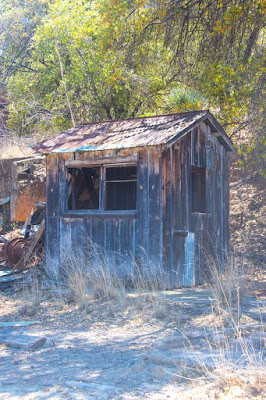 I imagine these big tanks held water, but I couldn't find any info on them.  This one has been cut up to use the steel for another project.  There are lots of projects going on around here.  In fact, it looks rather like a bad flea market. 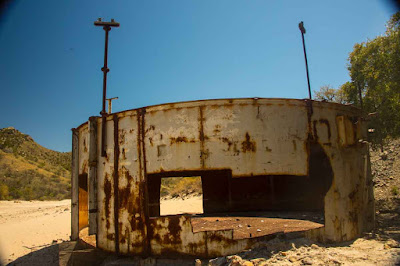 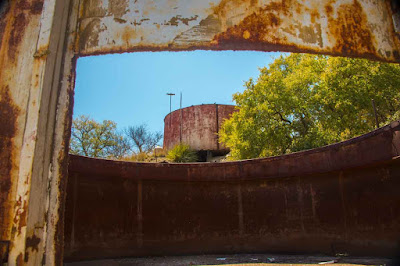 What we thought was a huge sandy beach at the edge of the lake, turns out to be a canyon completely full of sand mine tailings from the ball mill. 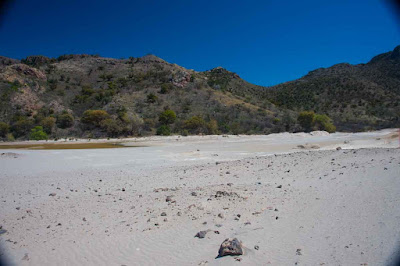 With gold comes the need for a safe to store it.  Here it is, built all by it's lonesome to house the expensive stuff. 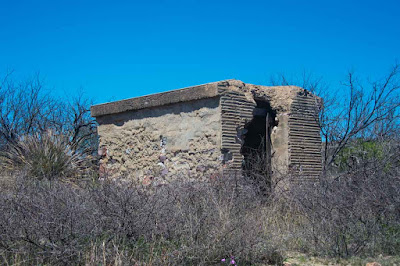 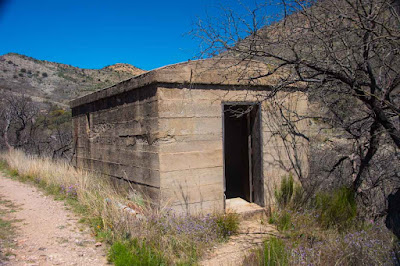 For years, they just chained the drunks and robbers to trees, but eventually built this jail to house men until they were transported to Nogales. 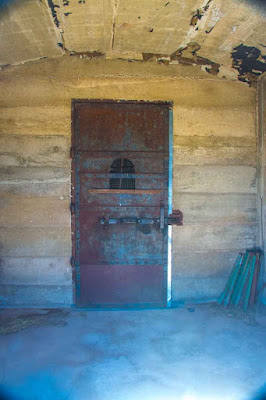 Of course with a jail, you have to have some kind of court system.  This building was used as a meeting place, a guest house for visiting dignitaries and a courthouse when required.  It is probably in the best shape of all the buildings.

Ruby's most prosperous years came in the 20's and 30's when Eagle Picher operated the mine, becoming the largest producer of lead and zinc in Arizona, with silver being third on the list.

This is the Hutchinson house, owned by a master mechanic who kept the entire mine operational. 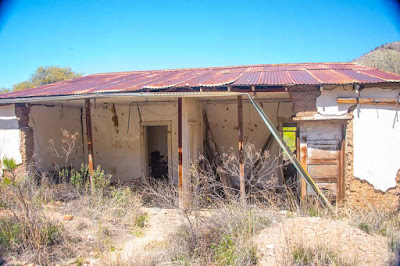 This warehouse is where he spent most of his time.  It is probably the second best preserved building. 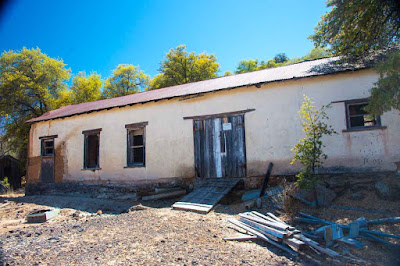 There are many more residences currently falling down from the dissolving adobe construction. 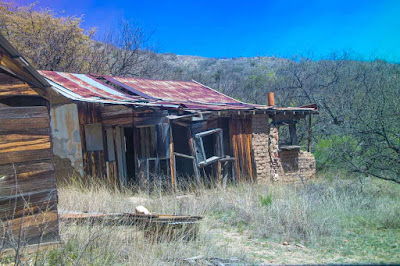 Here's a weird one ... a cistern.  It is said the kids would swim here in the summers.  Isn't a cistern for drinking water?? 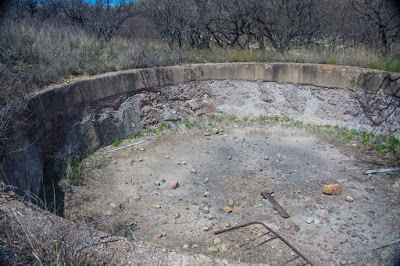 They also attended school with the nicest outhouse in the West.  I'll postpone all that until tomorrow.  This is getting WAY too long.

I hope everyone has a wonderful Easter.  It rained here most of the day yesterday, making the desert green and beautiful.