Sacrifices Must Be Made

Remember when you were a kid and any time you went out to visit relatives you had to take a bath?  At least we had running water and a very old claw foot tub.  That made it a little more fun.  Jonathan heard me tell the puppies we were heading off to California, so he decided it was bath time. 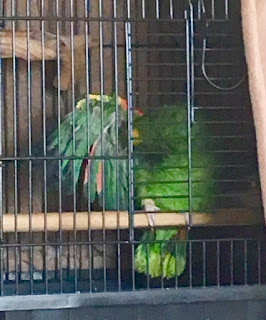 His tub is a little on the small size, at only four inches across and about an inch deep.  That means he must stick his head in the water and shake his feathers while opening his wings to spread the droplets.  In no time he looked like a drowned rat. 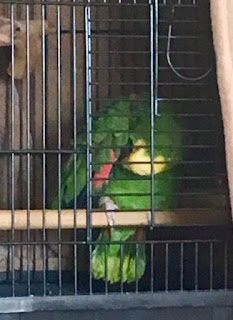 Once he's nice and soaped up ... it's a military shower ... he grooms all his feathers, picking out the unacceptable ones little by little.  Sometimes when his wings don't act accordingly, he growls and bites them into submission.  What can I say, he's weird.  In the end, I have a big wet feathery mess on the floor to clean up. 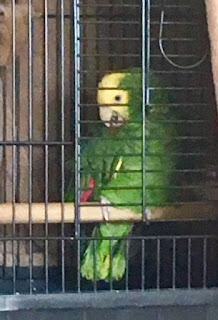 No, the puppies are NOT getting baths.  Although they need it, I'm not up for the struggle that always ensues.  What I DID do was unpack the freezer in the house and try to repack everything into the much smaller freezer in the rig.

Oh it's a big household fridge, but not near as large as the one inside.  It took some doing.  I removed everything twice and repacked, trying to get every little inch full of something.  I'm sure I've got enough food for a month, meaning I won't have to hit the store any time soon.

I'm sad to say however, sacrifices had to be made.  There was no way I was leaving this ice cream behind.  The OTHER container was half full.  I had ice cream for breakfast, lunch and dinner.  Somebody had to finish it off.  Luckily, that somebody was me!

The trouble is, there was one MORE container.  I'm sorry to say, the huge frozen chicken was sacrificed.  Not only that, but listen to this!  FOUR big pieces of pizza (OH NO!) went along with two containers of homemade broth to the Chance household.  After rearranging THEIR freezer, everything was saved. 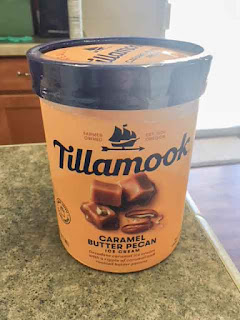 I admit, I'm rather sad to be leaving, but things need to be taken care of.  It can't be too bad in California, they just reopened all the golf courses.  Priorities you know!!  Hopefully parks will soon follow.  Lucky for me, all the RV parks I stay at are OPEN.  Don't tell anyone, they have been open the entire time!!