A Little Peek Inside

Back in time to the little town of Fairbank Arizona.  Images of this treasure are few and far between.  Amazingly it was a booming little train stop on the way to the biggest silver mine in the area.  Originally named Junction City, the railroad came this direction in 1881, following the San Pedro River.

Finally complete in 1882, the city became official in 1883 as Fairbank, named after the Chicago investor who financed the railroad and the Grand Central Mine in Tombstone.  This main building housed the post office, a saloon of course and a general store. 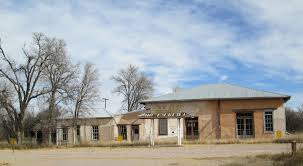 Although at one time the intersection of three railroads, the mines played out, leaving Fairbank in the dust.  The Boquillas Land and Cattle Company, which boasted heirs of the land, came in around 1901 and evicted all the land owners exerting their "legal" rights to the land under a Mexican Land Grant.

Most of the people still living in Fairbank destroyed their homes rather than let the Cattle Company have them.  A few families were allowed to remain and lease what became known as the adobe commercial building you see here.

The little school closed in 1944 but the Post Office stayed open until the 1970's with the store still remaining open several years more.   Eventually it fell into disrepair.  In 1987 the Bureau of Land Management acquired the land into their National Conservation Area in order to save the water and land for the critters.  Pretty cool.

By that time, the buildings were in pretty sad shape. 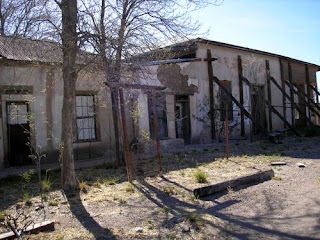 Although definitely not their primary focus, the NCA stabilized the buildings that were left standing. 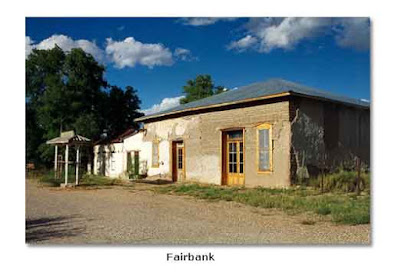 Since that time, the Friends of San Pedro Riparian National Conservation Area have restored the outside of the building to what you see today.  When Doug Laning and I cruised through town, we found the chain link fence gate open.  I saw my opportunity to use my feminine wiles on the two repairmen taking a break. 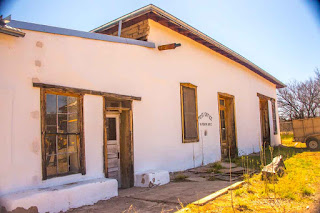 Not really ... I asked if we could peek in the door and take some pictures.  I'm pretty sure they didn't speak English.  THANK YOU!!!  We quickly hot footed it in the first open door.  You can see the original flooring and adobe interior walls. 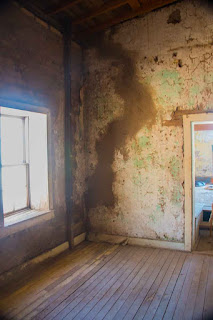 Stepping lightly so as not to fall through the floor, we made our way to the back of the first room.  Interesting, look at the pink paint!! 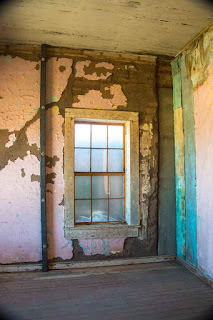 We walked through an interior door into the next room.  This one had walls covered with plastic, sheets and wallpaper. 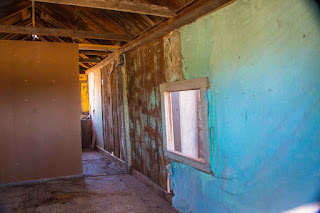 The next room was the actual general store section I think.  The interior wall was wood and sheetrock.  You can definitely see the effects of rain coming through the now repaired roof. 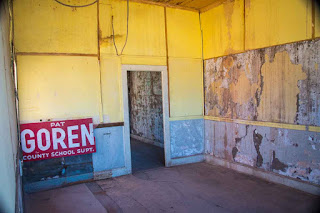 Apparently sheetrock was in short supply as pieces of canvas and fabric covered some interior walls. 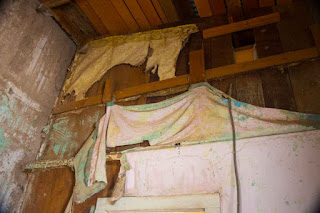 At last we walked into the saloon.  Wow ... there was some major shoring up done here.  It was the largest room by far.  We shuffled through some papers left on the chair, but alas, no treasures were discovered. 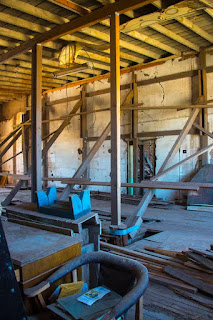 Knowing we were really trespassing and probably where we should NOT be, we snapped a few quick images and got out of Dodge back the way we came.  How exciting was THAT!! 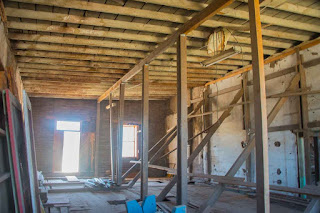 Wanting to take a look at the back of the building, I walked around the side, snapping pictures all the way.  The two guys said they were "painting", but we concluded they were actually either scraping off the outside adobe brick stucco or replacing (painting) a protective stucco sealer coat over the adobe. 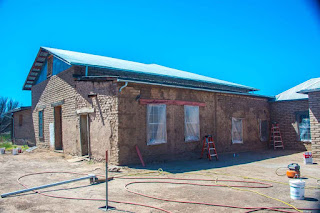 This little cabin-like building was a later addition to the adobe building.  They are guessing it was a house, possibly turned store of some kind. 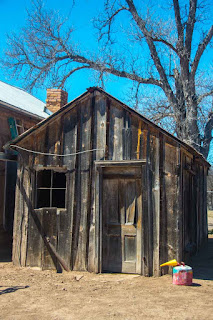 As we rounded the corner and headed out the gate, we waved and yelled Gracias to the two workmen, who waved back.  I can't believe my luck to have been able to access this amazing building.  I mean look at these doors ... they are original!!!  You can still see the huge timbers over the top.  What fun!! 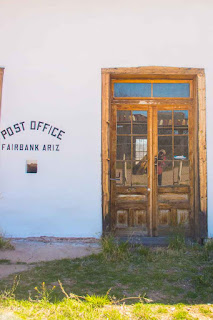 I must have been born in the wrong time period because I'm fascinated with the life of the old west.  If you get a chance, check out Fairbank and take a walk to the cemetery.  My advice however, is to NOT go the long way around.  Come back the same way you went.  It's MUCH shorter!!

Posted by Nancy Kissack at 6:55 AM