I Lost Another Friend

I really do try hard to stay out of politics.  Sometimes I just can't stop myself and I lose friends.  It really wasn't a rant, or at least I didn't write it that way.  It just seems to me that a President is a President, and you support him as much as you can force yourself, even if you DON'T like him.  In the old days, everyone seemed to stick together.  In the world today, it's a completely different story.

I lost another friend last night, although not really a friend.  He only befriended me on Facebook because he was trying to sell me a million dollar home in Santa Cruz.  I'm sure he never saw my bank account.  We went to school together from the time we were 16 years old.  He never paid any attention to me or even talked to me then, and hasn't since, until he wanted to sell this house.

Unfortunately, we disagree about what the doctors say about the virus.  He's with the stay locked up for one full year group and I'm with the let's get the economy rolling again group.  Neither the twain shall meet and he unfriended me.  It's so sad that we've come to this point where we can't live together whether we are Republicans or Democrats.  It seems you are not allowed to have an opposing opinion any more, either way.

At any rate, my first order of business was to unpack the rig.  Having been told grocery stores were being difficult, I picked up everything I required at Safeway in Arizona.  No difficulty there.  That means I'm up to load #14 coming out of the motorhome.  The good news is I didn't sit on the couch or hit the fridge every few minutes.

For those who were wondering, THIS is the real reason I came back to California when I did.  Yup ... my horse trailer.  It seems the Chance family granddaughter might be getting her own horse.  I knew I was saving this trailer for something.

The problem is can it be hitched up to the high-in-the-sky pickup her dad owns.  Measurements were taken and the quest is on to see if it will work.  I hope it does, for a couple of reasons.  If it's gone, I won't keep hitting my head on the hitch.  For two, it couldn't be going to a nicer family, and in return, they said I could ride the horse occasionally. 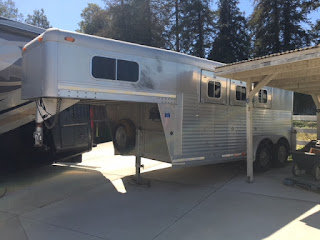 That means the first big project will be emptying it of all my gear, including my sleeping bags and fishing pole.  I used to take it horse camping up in the Sierras.  The front window opens to a queen sized bed.

First up was to remove the saddle covered with mold.  Leather is like a living breathing animal and cannot take heat and cold without coming alive.  I used a hose to wash it all off, but now have to spend hours rubbing a weird concoction into every little square inch. 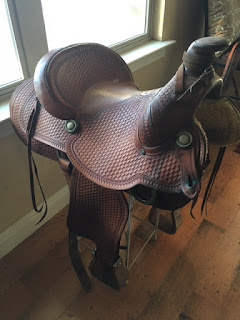 Just because I wasn't sore enough already, I grabbed my tallest ladder and spent an hour scrubbing the bugs off the front of the beast.  She's all "purdy" now!! 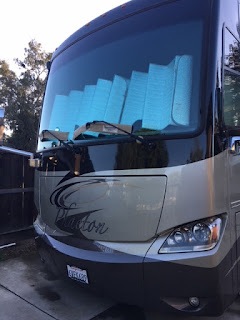 The next project, since it was 92 degrees, was to give Cooper a haircut.  Here's what's left!!  Just kidding, it took two sets of clippers and lots of patience to get it done.  He's feeling much lighter now. 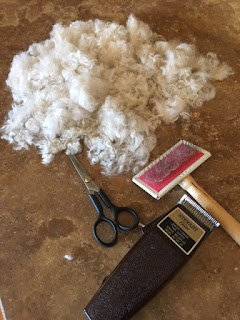 In no time dinner rolled around and I had nothing in the fridge.  Another two loads and I whipped up some tamale pie, kinda sorta.  You just fry up some onion and hamburger, dump in a can of beans (any kind of beans), a can of corn, a can of Rotel tomatoes, a package of taco spice mix along with a good helping of garlic powder.  Layer it with corn tortillas, only all I had were flour.  Smother it in cheese and bake for 30 minutes at 350.  How simple is that?? 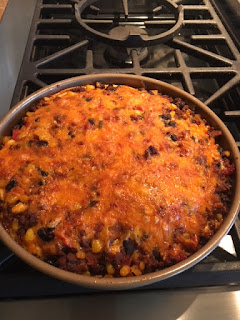 Exhausted, I fell into bed, but couldn't stop thinking about how I was unfriended ... twice.  It makes me feel bad.  Actually, that's THREE times since this virus stuff started.  Apparently you aren't even allowed to have an opinion in this environment.

I spent over an hour looking up Hollywood celebs to see what they donated, most of which involved GO FUND ME pages or proceeds from items they are selling.  I have to give it up for one rapper who paid the rent on an entire building in New Orleans.  Now that's a donation in my book!!  He really helped those people out.

I was wrong about the Clinton Foundation also.  They have set up a site to share reliable information.  They are also rescuing medical supplies and sending them to needy countries.  They partnered with with the City of Little Rock and several other organizations to deliver 120,000 meals to kids in the City up to April 5.  I'm sure other organizations are doing the same, we just aren't hearing about it.

Hopefully today is a better day.