After a horrible night's sleep, I arose the first day and got right to work.  Not really ... I sat on my porch and watched the sun rise.  Blocked by a big tree next to my yard, it didn't make for a good picture, but it sure was nice and cool out.

At 8:00 on the nose, the ADT alarm guy showed up.  Little did I know, we would become well acquainted over the SIX hours he was here.  Good grief Charlie Brown!!  After dealing with a high-powered idiot over the phone regarding this installation, I wasn't looking forward to being nice.  They wanted a LOT of money for the alarm system service ... and he wouldn't listen when I told him I wasn't paying that.  He offered gift cards, insurance discounts, everything he could to push me into buying in.   I finally got mad, as accountants can occasionally, and gave him what for!

It's a good thing I'm a stubborn old hag ... sometimes being rasty pays off.  Anyway, the kid arrived, did his thing, then I had to sit through a sales pitch like that of a time share.  I'm not buying it I said over and over and over.  Finally, I was allowed to sign the REJECT sheet and we got down to business.  If this costs me over $30 a month, I'm NOT doing it.  Period.  Cappish?????  Speaka de English????

At the five hour mark, I'd had it up to my gills and my patience wore thin.  However, I ended up with a telephone line (their cellular system is much more expensive, so we'll hope the telephone service is okay here) and with the help of the kid's boss, a bill for $20 a month.  Grand total ... $40, much better than the $60 they wanted in the first place.  I don't need no "stinking Visa gift card" but I'm getting one anyway.

Finally he was gone and my alarm system was talking to me .... WAY too much.  As soon as I can, I'm turning her off.  That's the exact moment when the Painters arrived.  Good timing!!  They made the rest of my day fabulous, albeit boring.  There's nothing more fun than watching the paint dry. 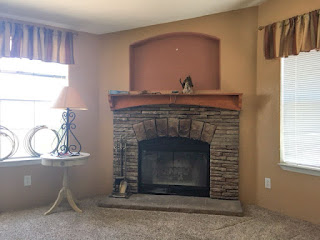 Here's a couple of BEFORE pics just so you can see the color scheme.  They had a little trouble with the turquoise.  Two coats of primer/sealer and two coats of paint will be required to cover it up. 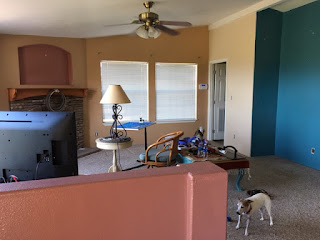 Here's my choice of paint.  Isn't it pretty?  I love it ... so much lighter and brighter!!  I'm totally enamored with the husband and wife paint team.  Both speak Spanish faster than lightning and never quit talking the entire afternoon.  I picked up a word or two here and there, just enough to know what the conversation was about.  They're funny and are doing an amazing job of painting!! 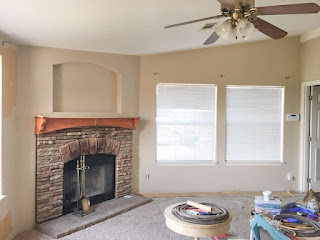 At 5:30 they finally called time so I could run to Ace Hardware for one more gallon of primer.  All of the pink (which is most of the house) requires primer.  On the way home, I stopped in at a little Mexican eatery ... a dive really ... between the railroad tracks.  Best Mexican food ever, full of REAL chilis.  This is enough food for four people and it was $10.90.  Pretty crazy!!  It's what's for breakfast because all I ate last night was the tiny tostada on top of the rice and beans. 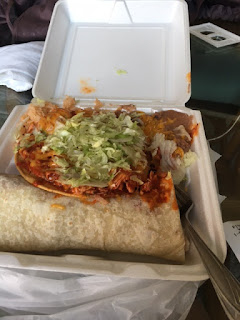 I will be spending today watching more paint dry, hoping they finish up.  They might have gotten further yesterday, but car trouble sent the husband to Mexico for repairs (it's cheaper there).  Hopefully I can stay awake today, since I got a great night's sleep, or as well as could be expected when you're sleeping on the hard floor.  With a little benadryl and earplugs, I didn't hear a single train!!!

Next up --- the furniture should be delivered today!!