I've heard about Yuma Prison over the years, being such an old west history buff, but was VERY surprised when we arrived yesterday at it's location on the river.  It was so much smaller than I thought it would be.  However, later when we calculated 6 men to a cell, counting the number of cells, it could hold maybe 250-300 people.  Small numbers by todays prison standards!!

Apparently the Colorado river used to flood this entire region and  could be up to 10 miles wide.  The prison was built on high ground at the rivers edge. 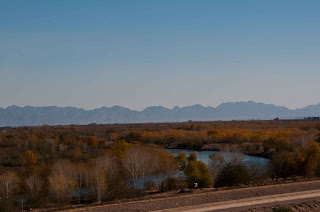 As we entered, it was easy to imagine how awful the conditions must have been. 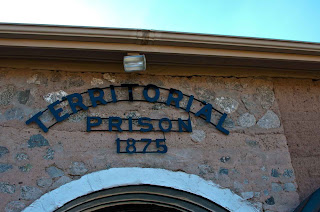 Seven original prisoners were brought here to build the first cells, which then became their home.  Six men were assigned to each cell.  Believe me, that doesn't leave much room for moving around. 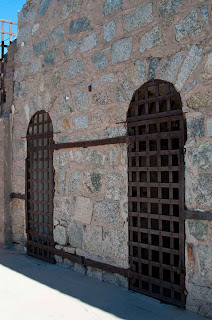 The first stop was the barber shop where the men were shaved bald.  Apparently that helped with the lice and other critters roaming about.  Looks like he had a small fireplace, as a stovepipe hangs from the ceiling in this room. 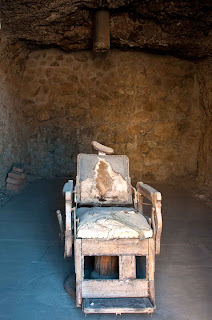 Here's what you would see every morning.  No electricity, no heat and only fans moving the already scorching air around "outside" the cells. 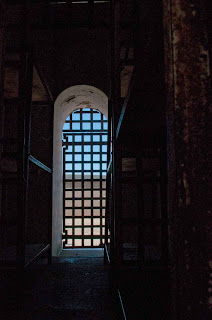 Six metal bunks were placed in each cell, replacing the wooden ones that were infested with termites.
There's hardly enough room to have two guys standing on the floor.  You can only see in this picture because I added the light. 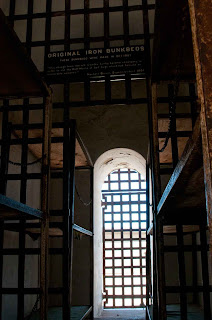 To keep busy when they were not on a work detail, they made horsehair hobbles and created fine knitting work.  Yup ... even the men knitted!!   Most of the inmates were of Mexican or Indian descent.  The horsehair work is just amazing. 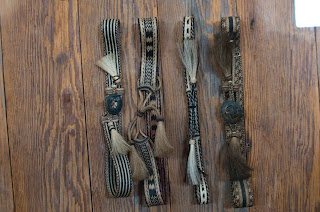 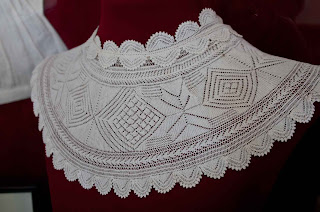 Although much has been destroyed when sold to the railroad for a right of way, there is still a lot left to be preserved.  Without the people of Yuma making donations, this prison would have been closed and probably destroyed completely.

One of the infamous was Pearl Hart ... a stage coach robber who got off scott free on that charge, but the judge nailed her on stealing a gun.  The gun here was actually hers.  There being no place to house women in the prison, the other men were forced to make four new cells just for the ladies.  Pearl spent a couple of years here. 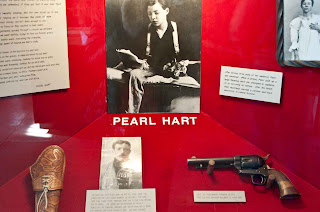 Next we stopped at the Quartermasters Headquarters ... the supply depot for the armies in this area.  I would LOVE to take one of these saddles home and try it out.  It's not much different from mine with the exception of stirrup leathers. 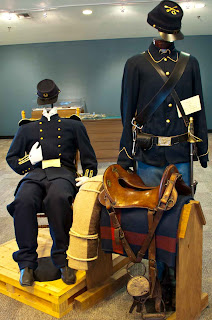 Around the buildings were lot of old equipment, from a honey extractor to a bottom dump trailer and this McCormick Deering tractor. 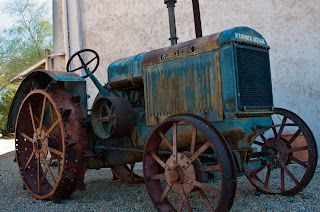 Two covered wagons were parked out front ... I cannot imagine leaving everything I owned, loading up this wagon with food and provisions, then spending months traveling/walking across the United States through these mountains and deserts, let alone dealing with the Indians who just wanted to be left alone.  I rather think it's amazing that the West was settled at all. 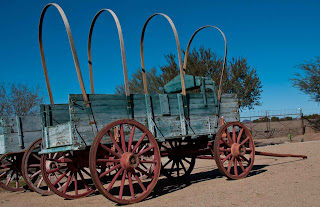 Leaving here, we passed Yuma's military memorial.  It's a beautiful park and worth a stop by to pay your respects to those who helped keep us a free country. 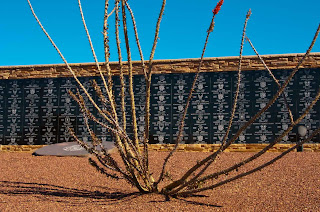