Things That Disappear At The Patch

It's a wonder, although it IS Halloween after all.  Spooky things seem to come out at night and make things disappear.  Take for example the box of gloves required to work in the hot dog tent.  Poof ... they disappeared.

I spent the first half of the day with the last of the field trip kids.  I realize they don't want to leave, but I had to tell their parents FOUR times that it was time to go.  Oh we want 5 more shaved ice and oh ... we want to take pictures now.  I try to be nice, but it's difficult when you've got the boss sitting on the heavy loader with a bin of pumpkins that he can't set down until they are all out of the way.

I watched as a couple disappeared into the corn maze.  It was only time for pumpkin sales.  I waited patiently until they came out tossing their tokens up into the air (proof they were in the wrong place).  In other words, they should not have even been NEAR the corn maze.  I escorted them back to the allotted area. 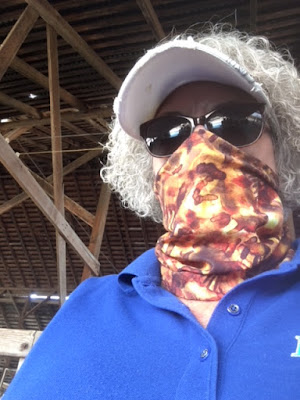 Time to get those hot dogs going.  It's a process to set up the roaster and get the dogs cooking, then heat up three bags of nacho cheese, in between which I run for tortilla chips, those missing gloves, ketchup and mustard.  Uh oh ... where's the box of packaged mustard??

I counted the hot dogs in the fridge ... we seem to have lost a package of 36.  I KNOW I counted those right.  That's when I found $20 on the ground ... something someone ELSE lost.

I tried to be cool when the crowds came streaming in.  Losing my mind now would not be a good thing.  We pumped out 100 hot dogs, 84 nacho trays and 200 shaved ice.  Luckily the crew of teenagers who come to work are amazing, wonderful girls ... I just can't say enough good words about them.  Yeah they forget to wash some things, but they really are awesome.

So this is the only picture for the day ... me in the barn trying to look cool in a mask while my head screams SNEEZE SNEEZE!!  I'm still hanging in there while constantly eating horrible tasting cough drops.  Tonight I'll be on the tractor ... maybe that other driver kid will disappear too ... while the girls run the snack bar alone, which they've never done before.  Hopefully they will be able to keep it stocked.

Then I will disappear into my comfy electric blanket covered bed.  Only three more days.  YAHOO!!

Total pounds lost:  this part I LOVE ..... ELEVEN!!  Now that's something I LOVE to see disappear at the patch.