The Empire Ranch overlooks a shallow depression called Empire Gulch in the Santa Rita Mountains. Tucson businessman Edward Fish first occupied the ranch in 1871, although no one knows if he is the one who built the first adobe ranch house or whether it was there when he arrived.  This is the main house today. 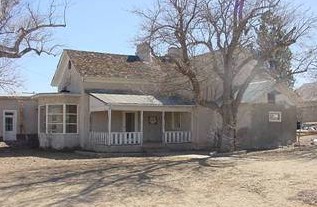 Having been around the cattle business most of my life, I thought it would be interesting to see the operation.  Everything is so green and beautiful, I had to stop along the way for a few shots. 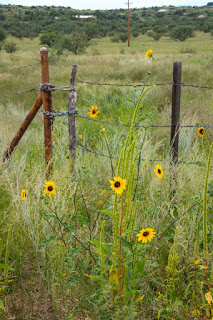 It was a spectacular day with cool breezes and beautiful clouds.  I probably should have checked the rain forecast first. 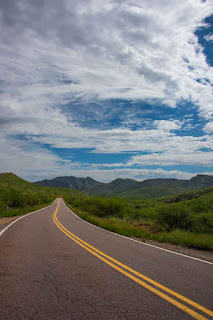 On a whim, I took the first dirt road off the highway to see what I could find.  I flagged down a passing pickup truck ... pretty easy since the road is only one lane wide ... and met a very nice man who told me there was not much to see here, but the Empire ranch had roads criss crossing the entire landscape ... paved roads. 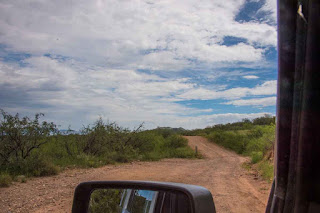 That sounded like a pretty good idea as rain began to fall and the road got muddy.  Maybe I'll just turn around.  I ended up on the PAVED road to the Empire Ranch Headquarters.

In 1876 Easterner Walter Vail (sound familiar?) and his English business partner Herbert Hislop purchased the 160 acre ranch and 612 head of cattle for $1,174, having talked Mr. Fish down from $3,800.  They immediately began buying up all the neighboring property for a final total of 180 square miles.  That's HUGE!!! 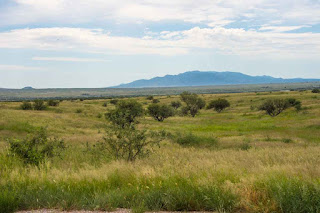 Walter Vail's wife Margaret, arrived from New Jersey in 1881.  There was only a four room adobe house to accommodate the cowboys, so Walter added on eight rooms.  I'll show you most of them, but probably tomorrow to keep this semi-short.

As I drove into the ranch, the Border Patrol had a big presence.  Apparently they stage here often on what is now BLM land, in order to patrol the border area with ATV's. 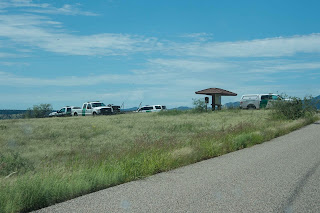 The views are fabulous.  If for no other reason, this drive is worth the short trip out of Tucson on Highway 83.  Bring a picnic and enjoy the beautiful scenery. 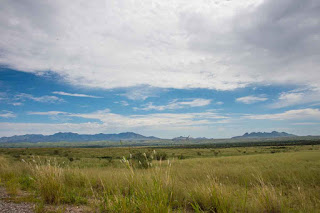 It's weird that this area receives most of it's rain in the summer when it's hot.  That's when the salt grass and yucca put on their best dress and show off.  Everything is so green!! 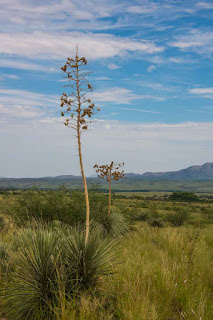 After quite a few miles, I came to the ranch headquarters.  It's a typical cattle ranch operation with more emphasis put on working the critters than the house and grounds.  Funny, there's no one in sight.   I spent a couple of hours walking the entire area and didn't see a sole.  Maybe a soul or two, but no live ones. 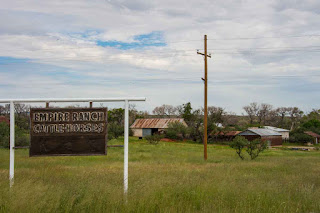 The windmill kept water in the big tank for both the house and the horses.  The land is presently owned by BLM and the buildings managed by the Empire Ranch Foundation.  They are doing an excellent job of maintaining the integrity of the buildings in spite of the rains. 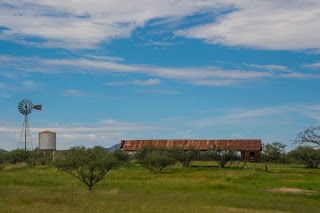 The concrete and wood chute next to this shed are usual sights around a cattle ranch.  In later years, cattle were run up the ramp into a waiting truck that hauled them to market.  Vail and Hislop wanted to increase their herd to 5,000 head, but expansion and debts kept them from seeing their dream come true.  They took on a third partner in late 1876, another Englishman named John Harvey.

John knew nothing about the cattle business, but learned quickly when they sent him out among the herds.  At this time, the horse brands changed from V to VH.  They kept the heart shaped brand for the cattle. 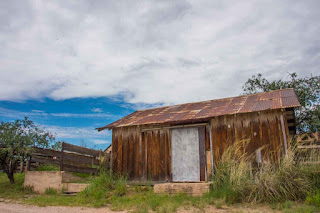 To keep rustling to a minimum, cattle and horses were branded with their ranch brand.  Those brands were registered with the local brand inspector.  Any sales of cattle had to be verified by the inspector to be sure you were selling your own cattle and not your neighbor's.  This adobe building is a shelter where they kept horses from being stolen by the Apaches. 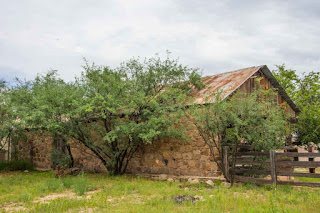 Our ranch brand was the K quarter circle.  Every single cow or calf we sold had to have the brand verified.  This amazing adobe building is a store house for hay and grain. 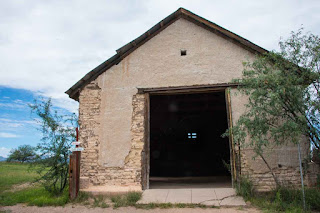 The outsides are all plastered, but the inside shows the rather small adobe bricks they used.  No one knows if they made the bricks or imported them.  I can attest to the concrete like hardness of the mud they used.  After all these years, they are still standing. 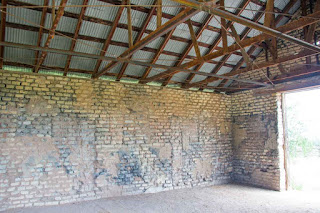 Indian raids were an ever present threat to the ranch.  They prized the horses and stole them at every opportunity.  The Empire Ranch put up a strong resistance with no cowboy going out alone and always being armed.

The horses had to be constantly watched, so they were kept in a field within 600 feet of the house during the day.  At night they were moved to the adobe enclosure attached to the house itself (the one pictured above).  With so much Indian activity, the U. S. Army built Fort Huachuca to protect the locals, but it was too far away to be of much help.

It was Geronimo's group who killed several cowboys and stole cattle on ranches near the Empire, but this ranch only lost maybe three horses.  When Geronimo surrendered, the ranch relaxed.  Here's one of the horse corrals very near the house. 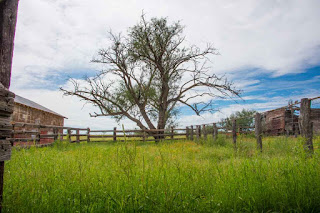 Later on, a war between the cattlemen and a sheep farmer almost brought the peaceful ranch to a standstill.  While Walter Vail was out trying to buy cattle to enlarge their operation, the neighbor decided to let his sheep graze anywhere they wanted, with the sheep even keeping the cattle from water.  This didn't set well with the cattlemen since they were losing valuable feed.

This became the decisive factor in Hislop's decision to move back to England.  He was already miffed because every dime was put back into more cattle instead of recouping their investment.  In 1878 Walter Vail borrowed $6,850 from his Aunt to buy out Hislop.  Wow, that's a lot of money for a woman to have way back then!!

A new partner arrived shortly after ... Walter's brother Edward Vail.  If that name sounds familiar, it's because that's where I'm staying now ... in Vail Arizona.

Stay tuned for pictures of the house.  It's pretty amazing with twelve foot high ceilings and three fireplaces.