A Big Hole In The Ground

First off, I hope all my friends in Florida are safe and sound.  Hurricane Florence is HUGE and is going to be devastating to anyone who decided to remain behind in the Carolinas.  It's just crazy that five tropical storms are in that area all at the same time, one headed for Florida.  Just look at this thing!!!  And I get scared with just a few monsoon lightning storms! 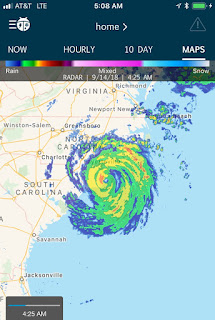 The crew from Superior Mobile Home Repairs didn't blink an eye.  If I had their gear, I might actually think about it twice.  Covered from head to toe in coveralls with breathing equipment, headlamps and what looked like scuba goggles, down they went into the depths to check the braces underneath. 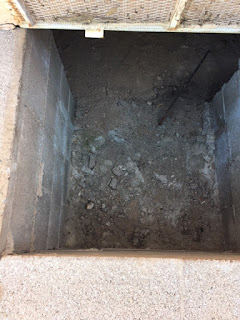 Amazingly, it was dry.  I was kind of worried about that since water underneath can devastate the footings holding up the middle of the house.  As with most companies, there was of course a sales pitch.  They took dozens of pictures of every place there was a hole in the vapor barrier.

There is a black plastic sort of material underneath keeping the insulation dry.  Over time, it gets torn open by plumbers and whoever else may have to do work down there.  Yes, it probably should be repaired.

I have to say though .... did you ever take a picture of something (like maybe a spider) and then look at it on your computer?  It could be only half an inch long, but the picture makes it look six inches wide?  That's what I was thinking as they showed me all these spots that needed repair for a total of $595 MORE than the $395 to do the leveling.

In the back of my head I'm thinking ... I've got scuba goggles, dust masks and a roll of gorilla tape ... why can't "I" do it for free?  All I need is a pair of coveralls.  So I passed on their generous offer. 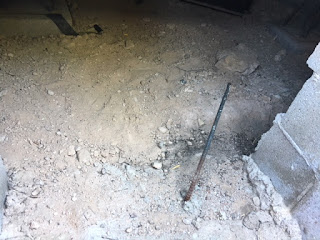 As to the leveling, in came a five foot long level and a laser beam on a tripod.  He walked throughout the house, taking measurements.  It seems my bedroom side needed a little TLC.  Generally, you can tell by cracks appearing in the wall corners and doors that will not shut.

Lucky for me, two doors wouldn't shut because of the latches.  The very nice (and good looking) man grabbed a hammer and fixed them both.  I'm impressed ..... another company that provides good service.

I noticed later that I didn't have to hold the front door shut in order to flip the dead bolt, so leveling definitely helped that!

There was one more problem.  I knew the dryer vent wasn't kosher ... it looked like this underneath the house.  All those corners are perfect spots to collect lint, making the dryer not work so well, not to mention being a fire hazard.  I asked if he could give me a price on fixing that. 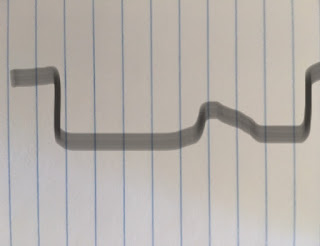 Yes ... yes he could.  Zero dollars to strap it up and cut off the extra three feet.  Seriously?  It took both of his men to fix it, so I gave him $50 cash and said they should all go out to lunch.  It was worth it to me to have it fixed.  You should have seen the amount of lint that came out of the vent. 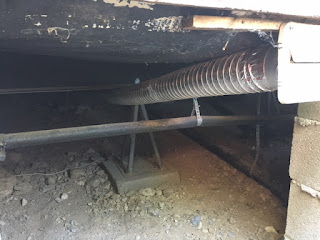 I'm feeling pretty good about my house now.  No water leaks, it's level and my dryer vent is fixed.  Maybe I can find a pair of coveralls at the Goodwill store.

Next up .... I'll report on my venture into Solar panels for the roof.