This is me ... in beautiful downtown Hanford at 4 am.  I'm a little bleary eyed since this is where the train engineers like to blow their horns over two intersections within a stone's throw distance ... all night long!!

It was not a bad drive since traffic was pretty light.  Two hours on cruise control got me here without a single bay door coming open.

Unfortunately, no one told me about the secret entrance.  I found the front gate locked up tight.  No problem ... I called the CEO of the parking lot, hoping he wasn't in church.  About fifteen minutes later, someone came and opened the gate.  With only two rigs here, it was pretty quiet for the first couple of hours while I settled in. 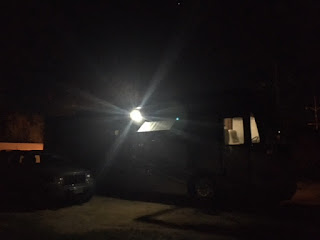 First up was a trip to the grocery store for garlic bread sticks, my contribution to the potluck.  Apparently I missed the memo where K-S should bring a salad.  Oh well, that's me.  Rebel to the end.  I'm not changing now, I've got six boxes of bread sticks in the freezer.

This is definitely me, only the "six" should read something like "32". 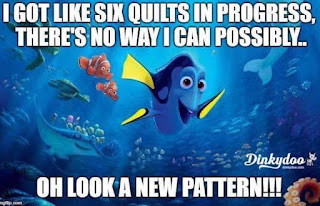 This is me too with a huge parrot bite mark.  You were wondering if parrots bite?  Yes ... yes they do. Even when you raised them from an egg, you have to be careful every single second, especially with Jonathan.

When he (she) was maybe two years old, he got very sick, requiring I grab him with a towel and give him shots in his belly, TWICE a day.  Needless to say, he's pretty shy of hands.  Unfortunately yesterday, I didn't pay attention and he nailed me.  It's black and blue today, and quite sore.  I should be thankful he didn't take out an entire chunk .. which he is more than capable of doing. 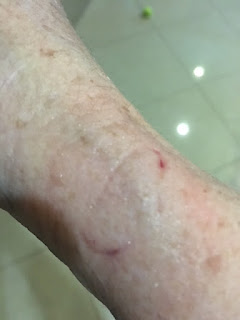 This is me too.  I never do selfies and rarely post pictures of myself, but there's not much to see or take pictures of in downtown Hanford. 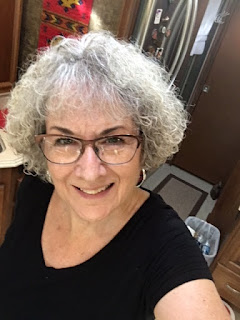 A group of twenty of us went to Ryan's Place for dinner.  I don't know these folks very well, so I didn't whip out my camera for an exciting picture of my stuffed chicken.  It was stuffed with broccoli, with broccoli on the side.  It was a LOT of broccoli.

Here's the cool part.  If you go online and sign up, you get a free piece of pie.  How could we resist that?  Unfortunately their site wasn't working exactly right and we all signed up twice.  Now we have to UNSIGN-UP once.  I got the peach pie.  Real fresh peaches and it was wonderful.

Today is a do-nothing day for friend Betty and I, so we may just have to go shopping.  I'm pretty sure there are no Chicos or Macys here, but maybe we can find a dairy supply store.  It's what they are known for ... some of the biggest dairies around.

Eventually I will bake up my 36 bread sticks and cut them in half.  That way there will be some for everyone and maybe ... just maybe ..... I won't get chastised for breaking the rules!!