I remember way back in the dinosaur era when we had to turn our lights off to keep the power bill down.  Leaving your bedroom light on was a federal offense, punishable by docking your 50 cent weekly allowance by 10 cents per incident.

We usually complied because that 50 cents could buy FIVE comic books at the corner liquor store.  Oh I remember it well ... spinning the rack around and around trying to decide whether to get Superman or Captain America.

Then along came someone who invented solar panels.  Sorry, there won't be any pretty pictures of this subject.

It all came about when my girlfriend in California called to say she got solar for her house.  Not really interested since I keep my bill really low, I asked her what DEAL she got.  She put no money down, had the panels installed for free, and still pays PG&E the same $200 a month she's been paying for the last ten years she has owned the house.  So how is that a deal?  Maybe if the cost of electricity doubles in the year 2030.

I think she got hooked into a crooked deal.  The solar company gets all the extra electricity which they sell to PG&E for a profit.  In 20 years, if she lives that long (she is 68), she will own the system and probably NOT have a bill for electricity. 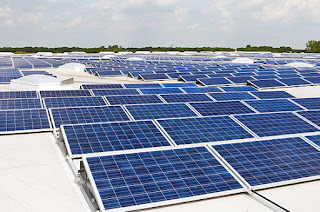 There's another reason I didn't want solar on my California house.  It would cover the entire front roof of the south facing building, making it much less appealing from the street.  No, this is not my house.  I think this is in Wales or somewhere totally irrelevant. 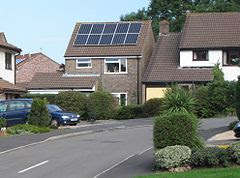 How about solar here in Arizona?  I mean really, the sun shines most every single day.  Mr. Chance hooked me up with his installer, proven to be honest and dependable.  I called him up and got a lesson in solar.

Here's the deal ... at least in Arizona.  I could buy a 5 watt system for $15,000 and get a $5,000 rebate from the federal government.  From the day of installation on, I would have no electric bill other than a $19 a month charge to stay in the system, which most likely would be wiped out by the extra electricity I generated every month that Tucson Electric Power would buy from me.

Sounds like a plan.  Sign me up.  The nice gentleman called me back in an hour to explain the laws.   How much solar wattage you are ALLOWED to install is dependent on your average bill every month.  If my bill was $200 a month, I could get a 5 watt system.  YAY!!

Not so fast there honey ... your bill has been averaging $45 a month, which means you only qualify for a 3 watt system.  That gets you nothing for your $10,000 investment.  You will never be able to produce enough electricity to sell extra to TEP with a 3 watt system.

In fact, you probably won't even make enough electricity to cover your bill for the month!!  It's the law and there's no getting around it.  They will not let you install a 5 watt system (or bigger) just so you can make money off the local electric company.

I was sort of in a panic over getting the system installed, since Arizona (at the bidding of Tucson Electric Power) was set to pass a bill saying it no longer had to buy from the homeowner at a profitable rate, any extra power produced by private solar panels.

If you already HAVE a system, you will be compensated at the high rate already established.  If you have a system installed AFTER the passage of this new bill, you will receive the same rate paid to the big power companies that provide electricity to TEP.  In other words, there is no longer an incentive to install solar.

I'm glad he was at least honest enough to tell me the truth ... that any system I am allowed to install will not be big enough to cover my bill, making my break even point come at about age 95.  It would just be a waste of money.  How many contractors will tell you that?

As for solar on the RV, the same goes for comparing the cost against the use I would get out of it.  Rarely would I be in an area where I would dry camp, unless it was Quartzsite for one week out of the year, in which case I just use my generator.  If I were full timing, it would be a different story since I have a household refrigerator.  Solar would then be my friend.

Alas, I shall remain in the dark ages, hoping my retirement check will cover the rising cost of electricity wherever I go.