Sneaking Around The Thunderstorms to Branson!!

This is what we woke up to yesterday morning ... well not really, because I was awake all night from the Severe Thunderstorm and Flood Warnings that were coming fast and furious from my weather radio.  Honestly, I'm ready to throw that thing out the window!!!  We are at the red pin in the middle, heading south to the second red pin, then southeast to the third pin.  The problem is that's the EXACT same way the storm is going!!  We're going to get hit big time about 30 minutes after I snapped this image, and although Tom and Barbara discussed moving the rigs closer to the Elks building, we stayed where we were parked with my four jacks on the ground for stability. 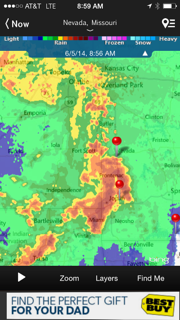 The good news is that we are parked on concrete!  When the storm hit, it was like fog!  You can see it running off my roof here, but what you can't see is the river pouring over the concrete and dragging my heavy electrical cord down the gutter under the rig!!  In about 45 minutes we got well over three inches of rain!!   C R A Z Y  !!!!! 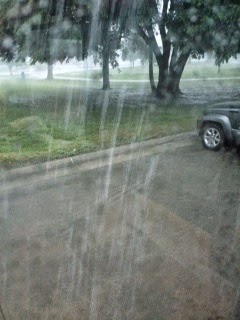 About noon it cleared up enough to hook up the cars and make the mad dash to Branson, trying to get there before the next big storm coming our way hits us between the eyes!!  This is what it looked like as we left headed South racing the clouds, with Barbara giving us directions ....  Faster!!  We have to miss that cloud!!  Faster!!! 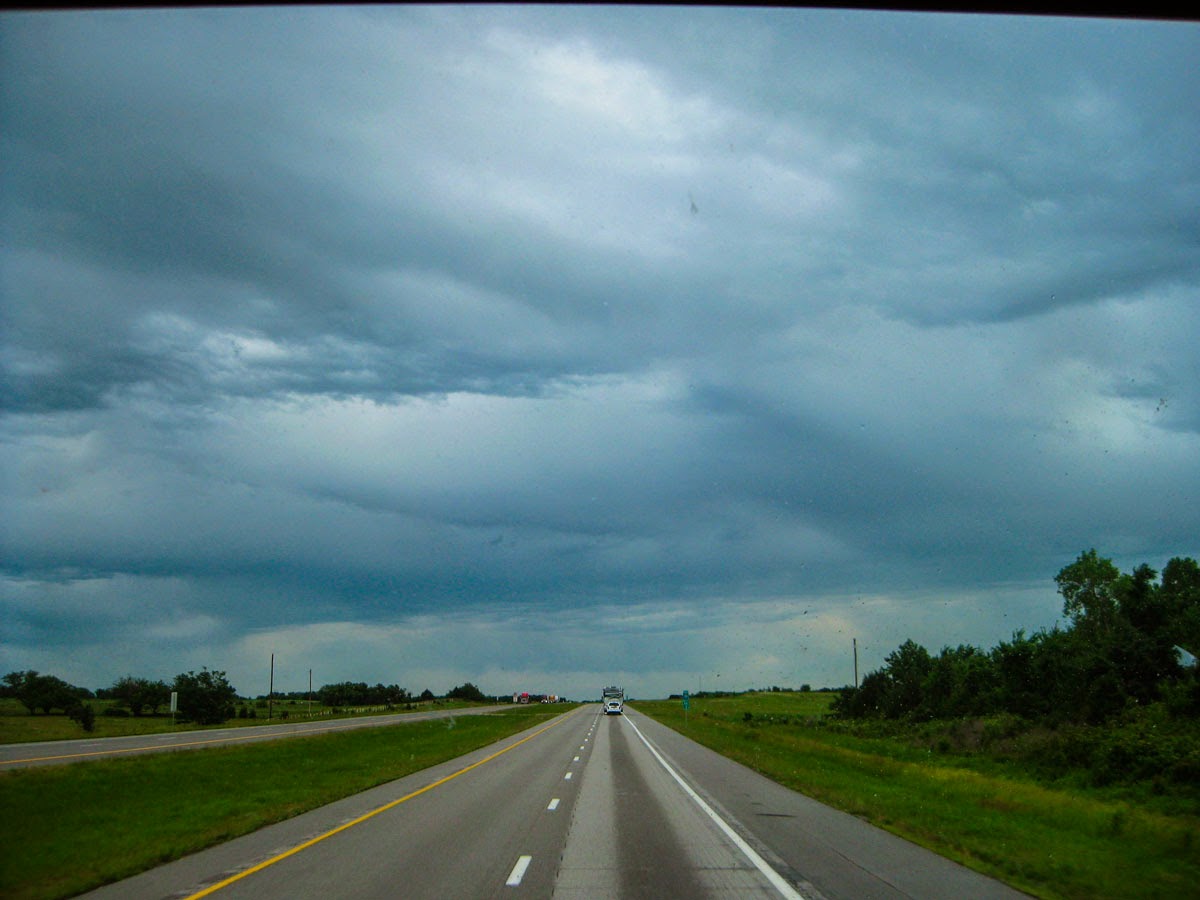 We slipped between two big storm clouds and headed East, going the same direction as this downpour!!  The old adage "when it rains, it pours" is certainly true here!! 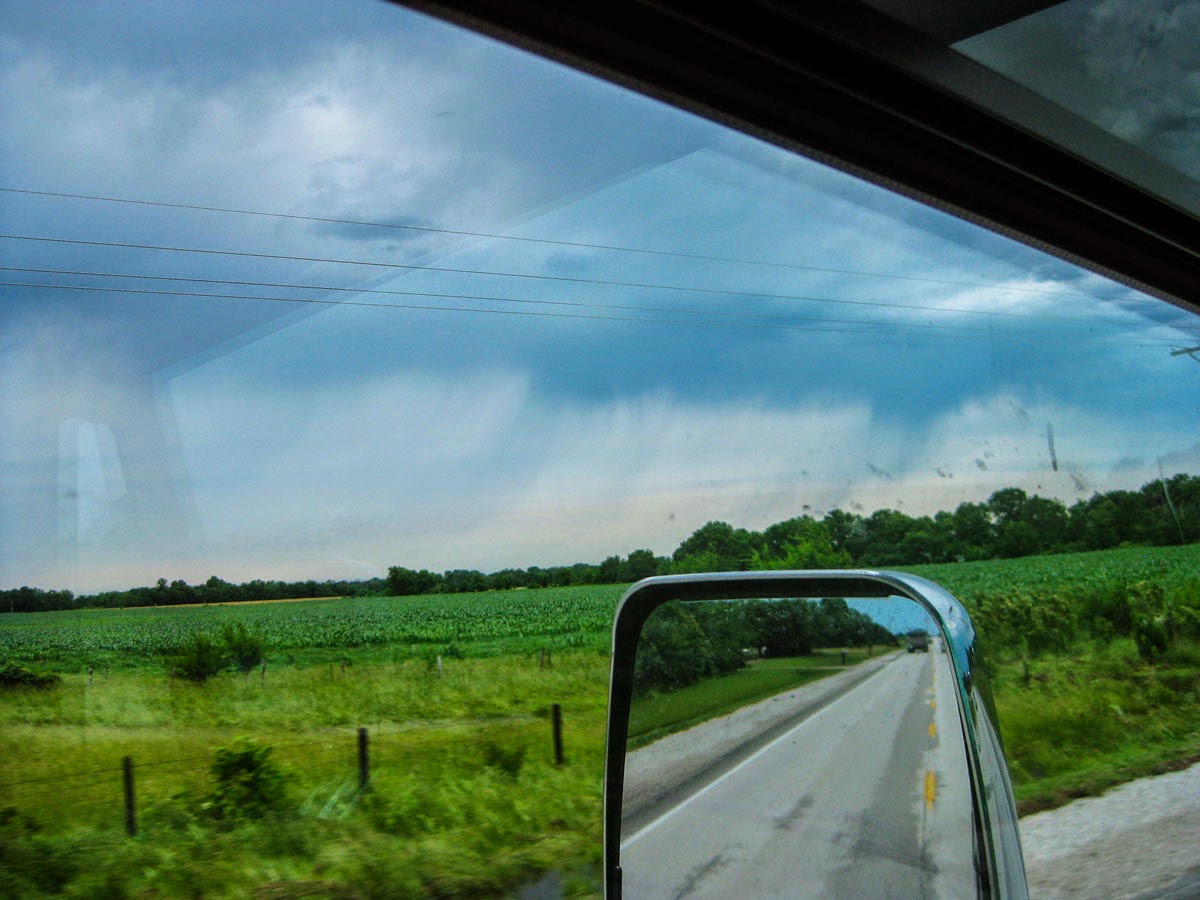 As we continued East, Barbara slowed our speed so we wouldn't catch up to the storm in front of us!! I'm telling you, it was like directing an orchestra!!!  As we drove along, I was getting more screeching Flood Warnings from my phone, but only one bridge we crossed on old Route 66 looked like flooding was imminent!! 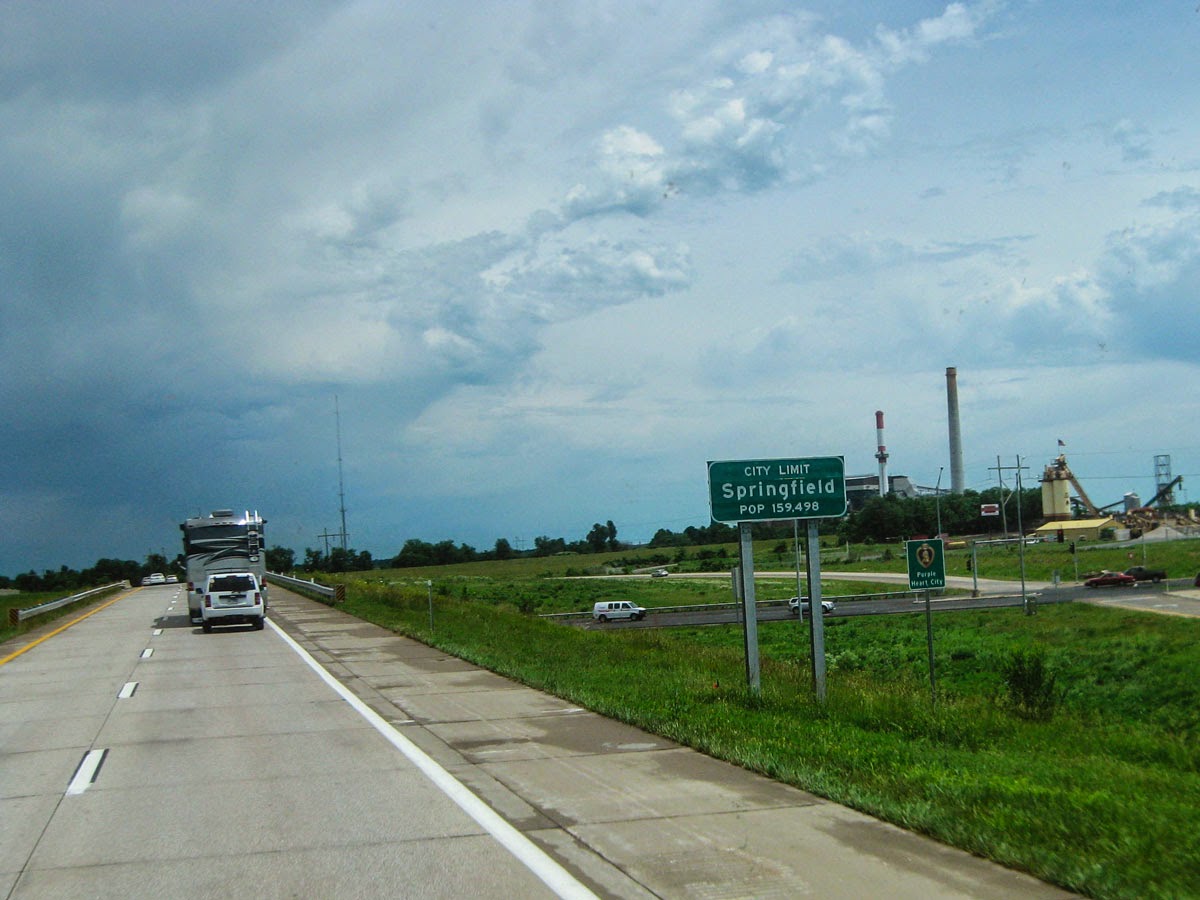 We barely missed the big rain hitting Springfield and turned South to Branson where the clouds finally lifted a little. 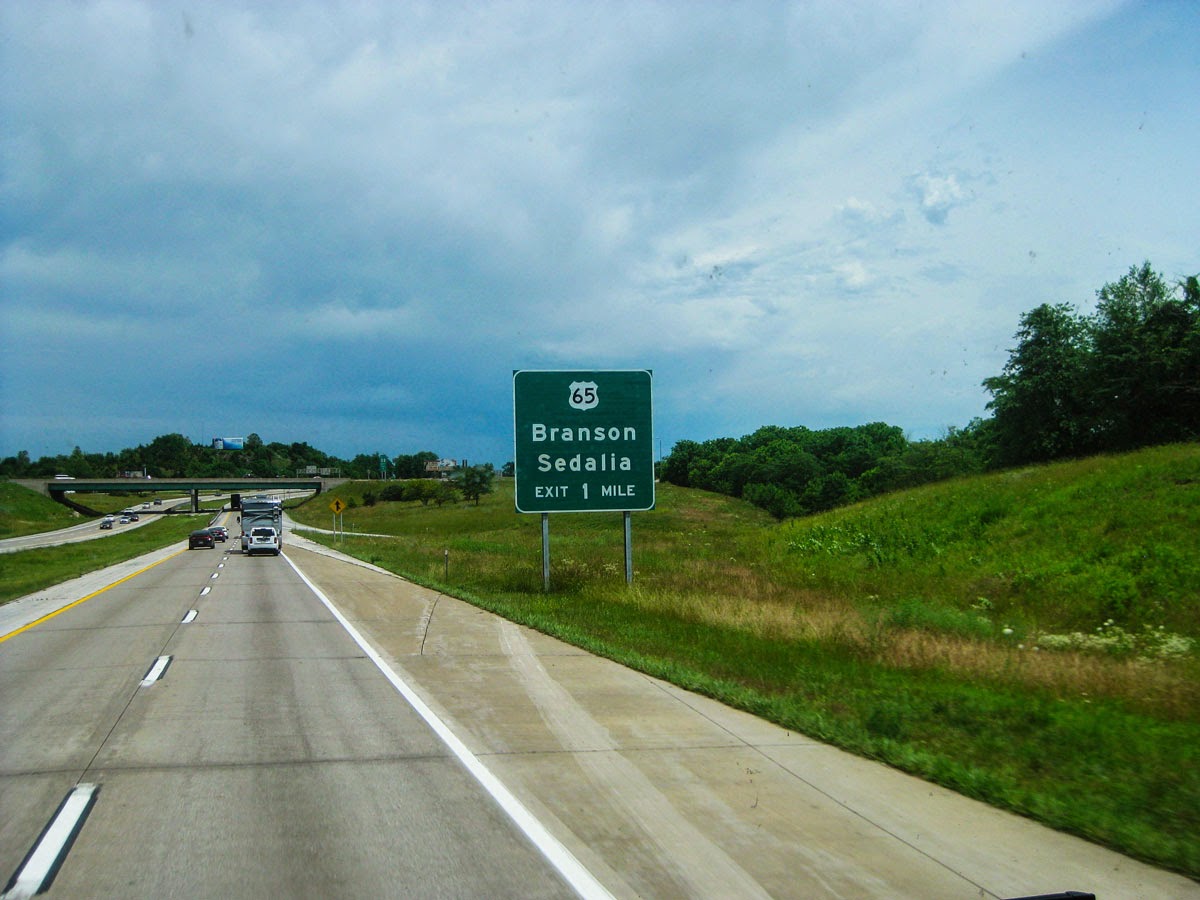 From flat plains to mountains, we were either going down 6% grades or going up 8% grades!!!  There's no middle ground here!! 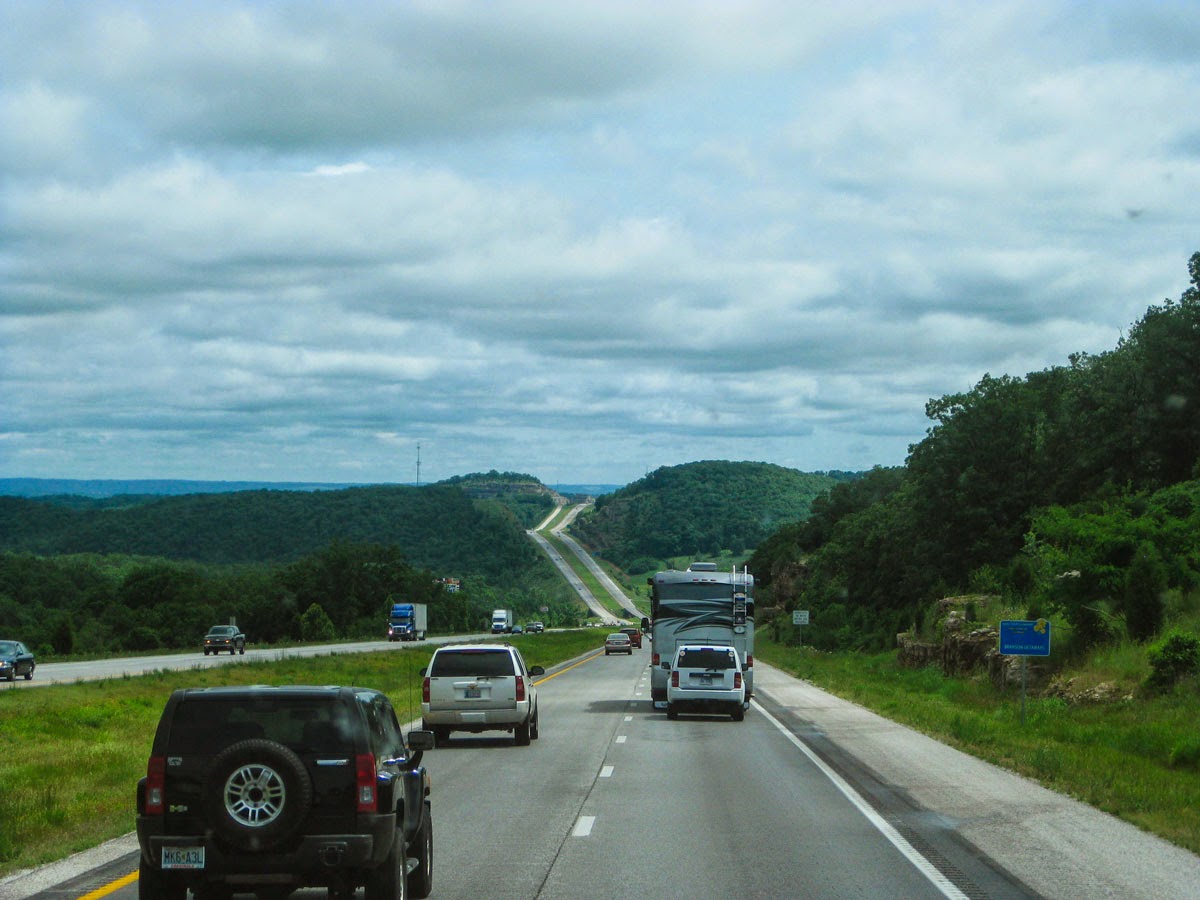 Coming into Branson there are beautiful rock formations on either side of the road, that I paid absolutely no attention to!!  I'm watching my RPM gauge and my speed like a hawk!!! 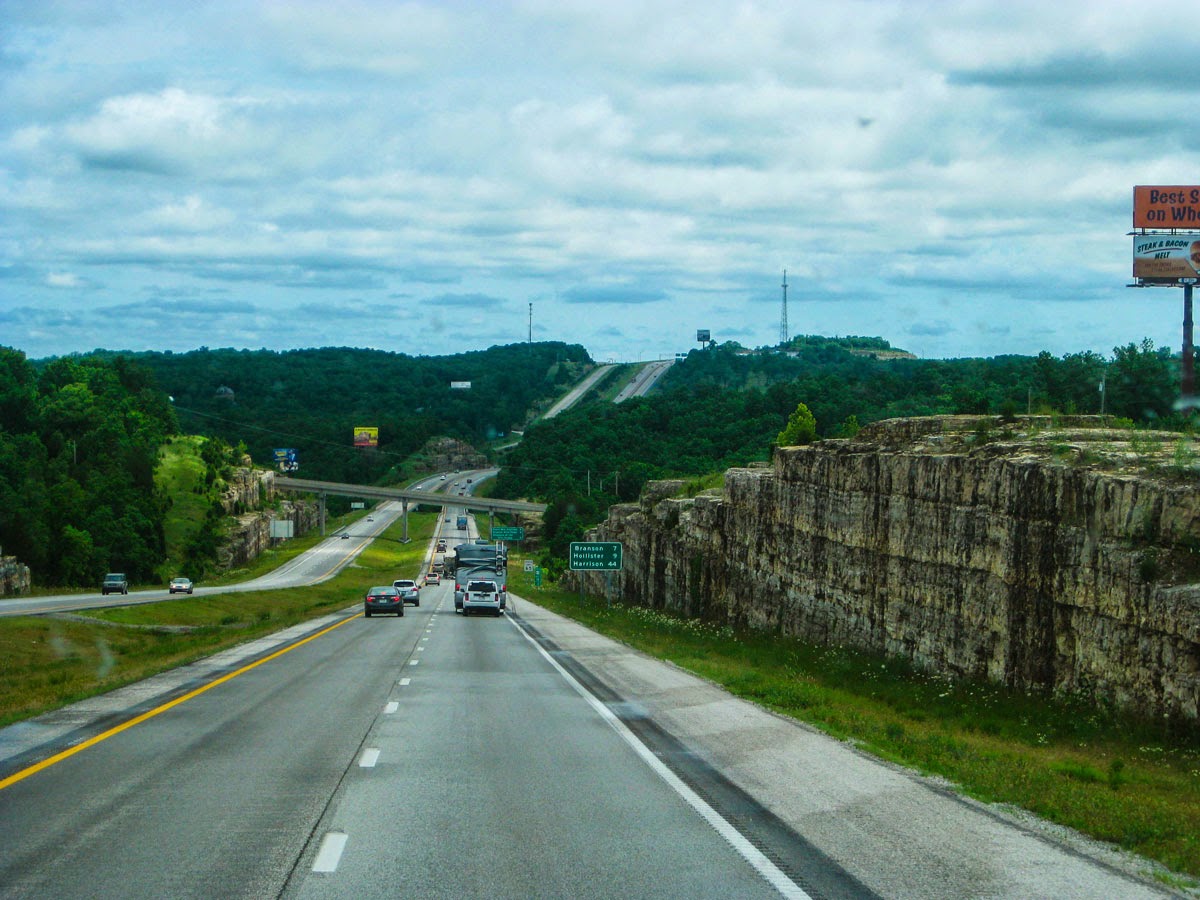 As we pull off the freeway and meander through town, I breath a big sign of relief and give BIG ups to the navigator who kept us out of the storms the entire three hour trip.  Now parked at Turkey Creek Escapees park, I can relax!!  It was then I read on Facebook that Cool Judy hoped we weren't parked too close to the lake/waterway, as she has known it to flood the first 3-5 rows of RV parking!! Oh NO!!!  The good news is that I'm parked at the top of the area, right next to the very noisy road ... but Tom is parked almost next to the river.  It's supposed to pour down rain every day this week, so if the river rises, they can come park next to me!!!

A quick reconnoitering trip down the Red Route led us to McFarlands Restaurant for dinner.  By the way, there are four main roads ... all of which are either going uphill or downhill ... as Branson is built around and on top of mountain ridges with barely a flat spot!!  Here's King Kong hanging on to the building with one hand and a smashed airplane with the other!!  This is just like Hollywood!!!  There are a few businesses that were taken out by a tornado last year ... let's hope that's NOT going to be the case THIS year!! 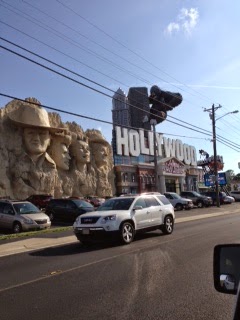 At McFarlands, this group of people were unknowingly seated at the "magic" table.  Once they are served their food, the table rises VERY slowly until their plates are at their chins.  It was funny to watch as they finally realized something was happening, but they never figured out what until the waitress told them and the table was lowered!!  Too funny!!! 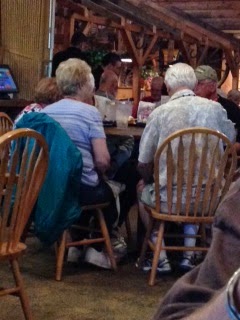 The catfish was wonderful according to Barbara, Tom had a tasty beef melt and my chicken fried chicken was good enough to take half home!!

One of these days I hope to tell you about the great night's sleep I had ... but not today!!  I'm stiff and sore from yesterdays storm chasing ... and again with the weather radio alarms.  Tonight I'm turning it OFF.  I already know there are severe thunderstorms predicted for every day we are here, which also means flooding, but as long as we are parked, I'm going to take my chances!!!!  In case of a tornado, the City will sound a siren, and the Rock House shelter is just a few quick steps away!!