So far there were four NOAA thunderstorm warnings since 9:00 last night.  This is normal to the residents of Nevada, but it's a little aging for a sunny California girl!!  This is what the radar looks like now.  See the tiny little blue dot to the far right (middle) ... that's us in Nevada.  It's not the thunder, lightning or rain ... it's the golf ball size hail!!!  We were headed to Branson this morning, but Tom says we should sit tight until this one blows over, which I have absolutely NO problem with! 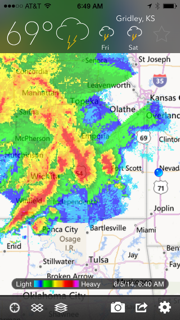 Yesterday was a gorgeous sunny/cloudy day in Fort Scott ... built as the protector of the "Permanent Indian Frontier" and the settlers who ventured that far West.  The problem was that the pioneers just kept going, taking over all the land as they went.  The residents experienced a lot of violent unrest between Kansas and Missouri prior to the Civil War.  Eventually, it became one of the biggest cities in Kansas.  With the fort no longer needed, it was sold to private parties who made hotels out of two of the buildings ... one Pro Slavery and one Abolitionist. 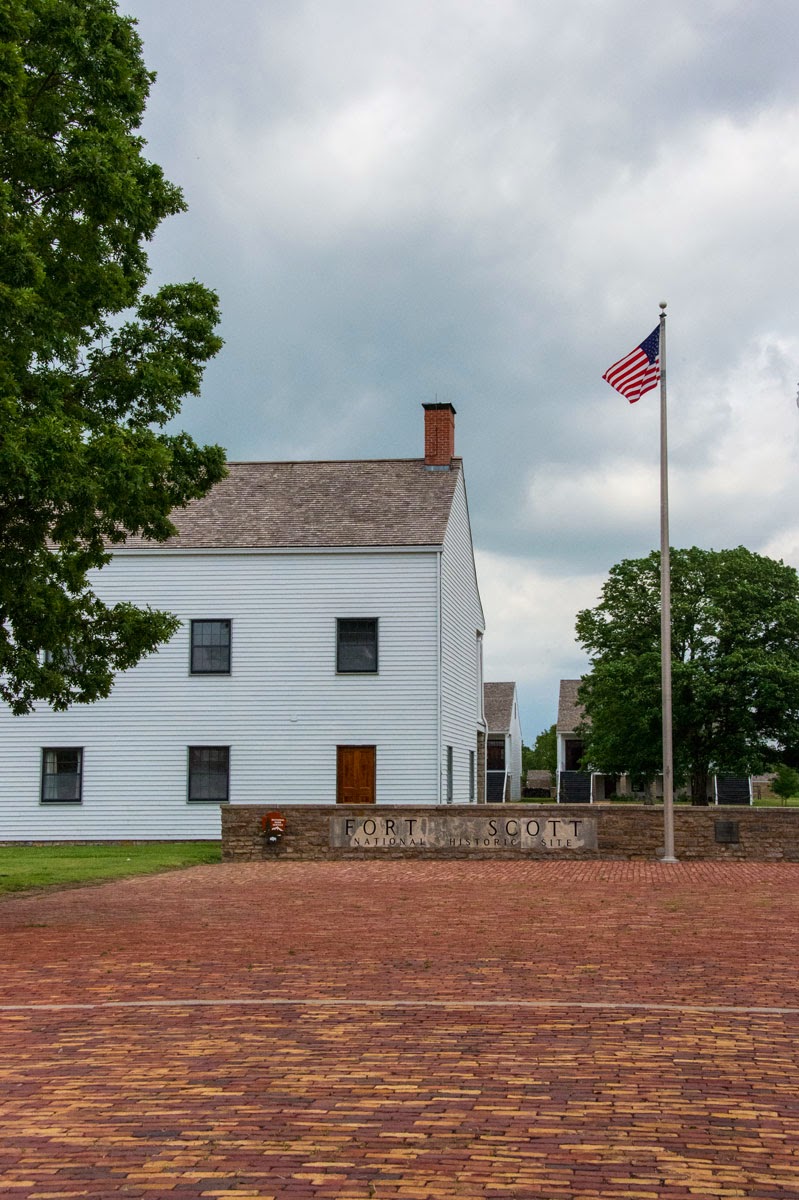 The largest building became the hospital with the infirmary on the second floor. 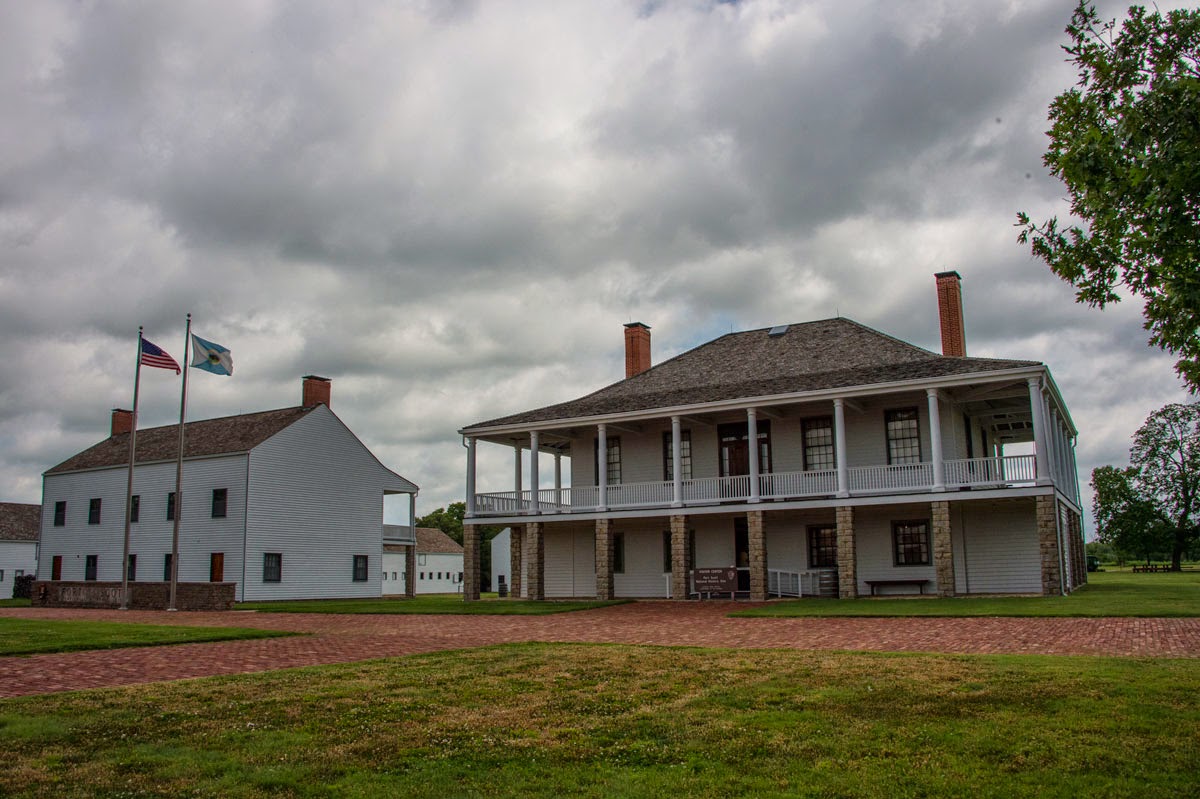 The horses were treated just as well as the men.  This huge barn is full of stalls and saddle rooms. 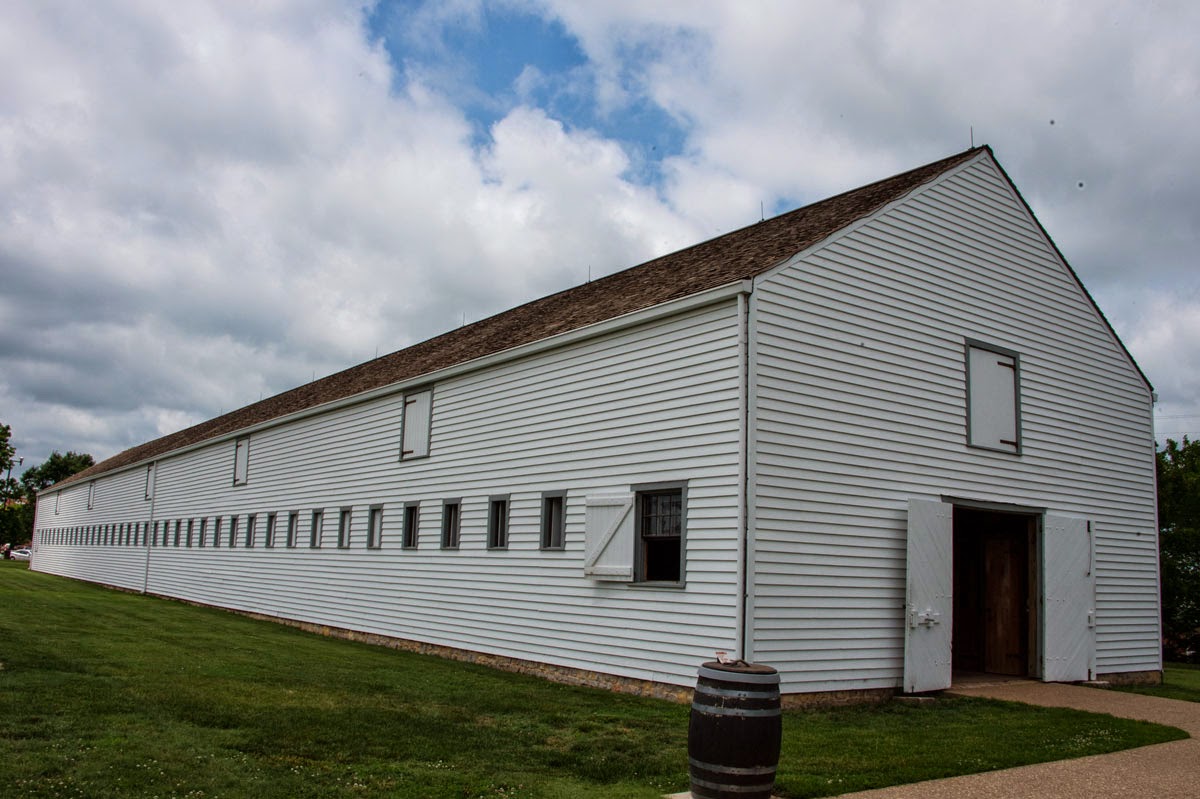 Across the grounds are the Officers Quarters, pretty spectacular compared to the infantrymen housing.  One building has been completely restored and filled with furniture as if someone just walked out the door. 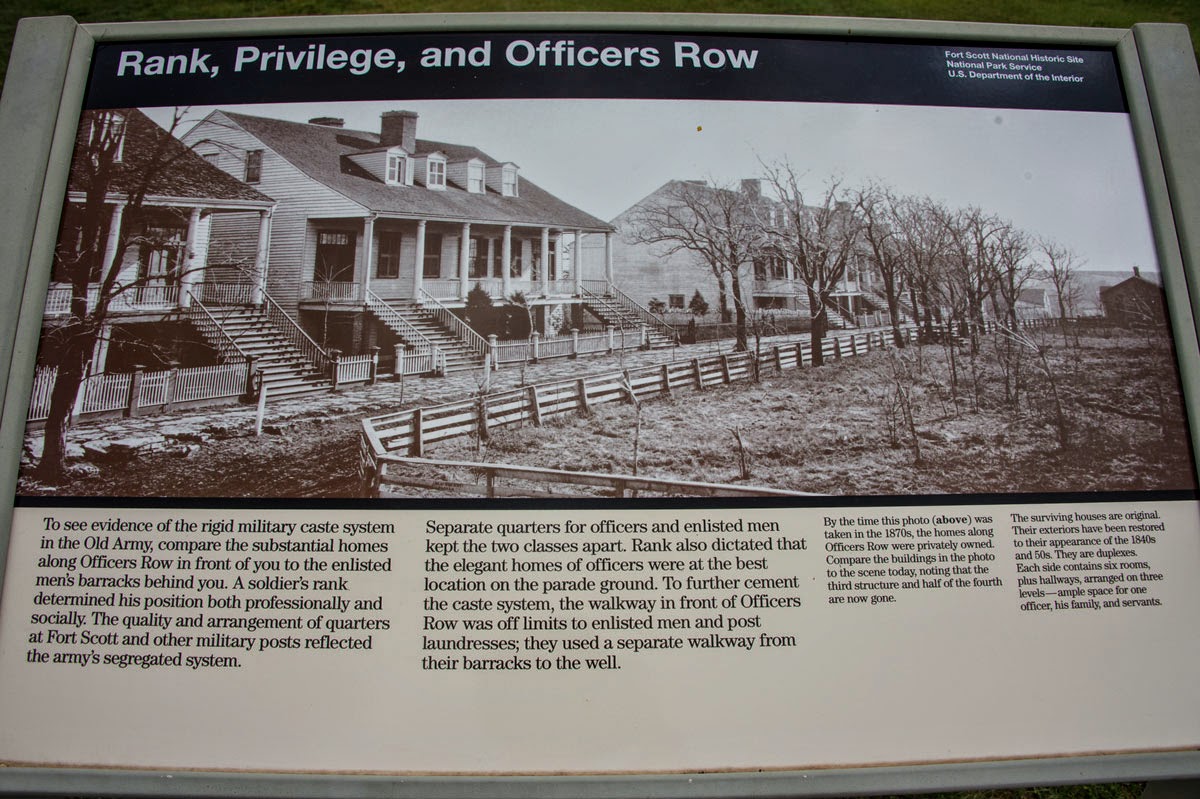 Then and now ...... the only difference seems to be the rock pillars and the fence.  The second building in this picture was left alone.  They have renovated it enough to make it safe, but have taken care to preserve the old wallpaper and lath and plaster so you can see how it was originally built with hand hewn logs and hand cut lathe. 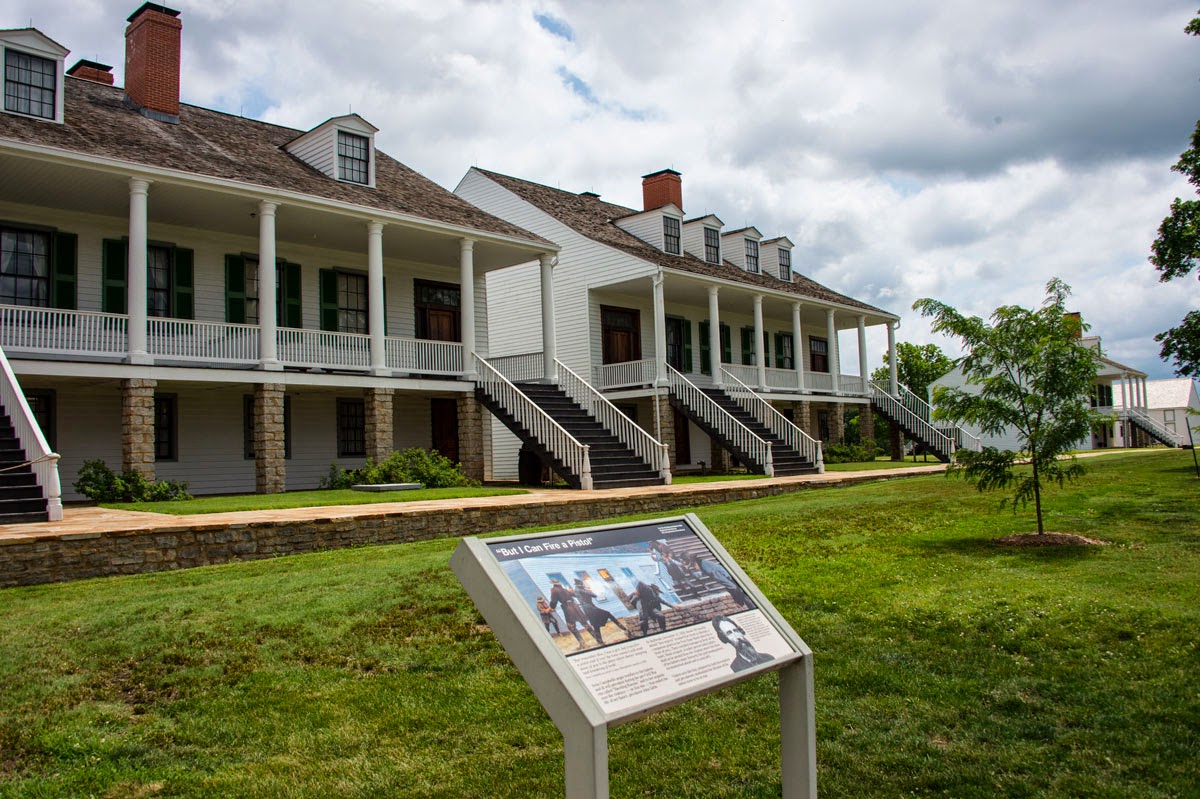 The parade grounds are huge, with an armory and water well in the middle. 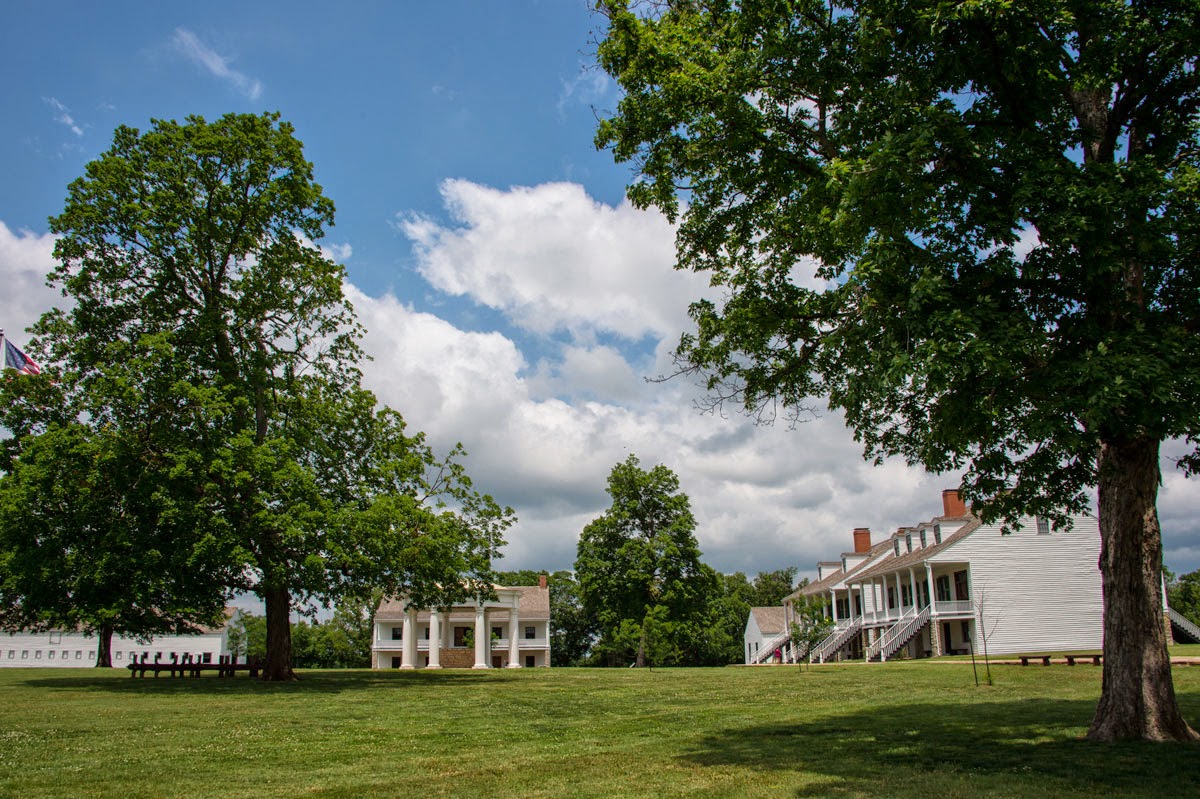 This exact spot was the site of one of the many violent shooting events.  After the fort was sold, this became the anti-slavery free state hotel.  The one opposite became the slavery hotel.  When the slavery proponents went to get one of their men arrested and held in the anti-slavery hotel, gunshots were fired.  A young woman's fiancé stuck his head out of the building on the left and was shot.  Outrage and more fighting ensued. 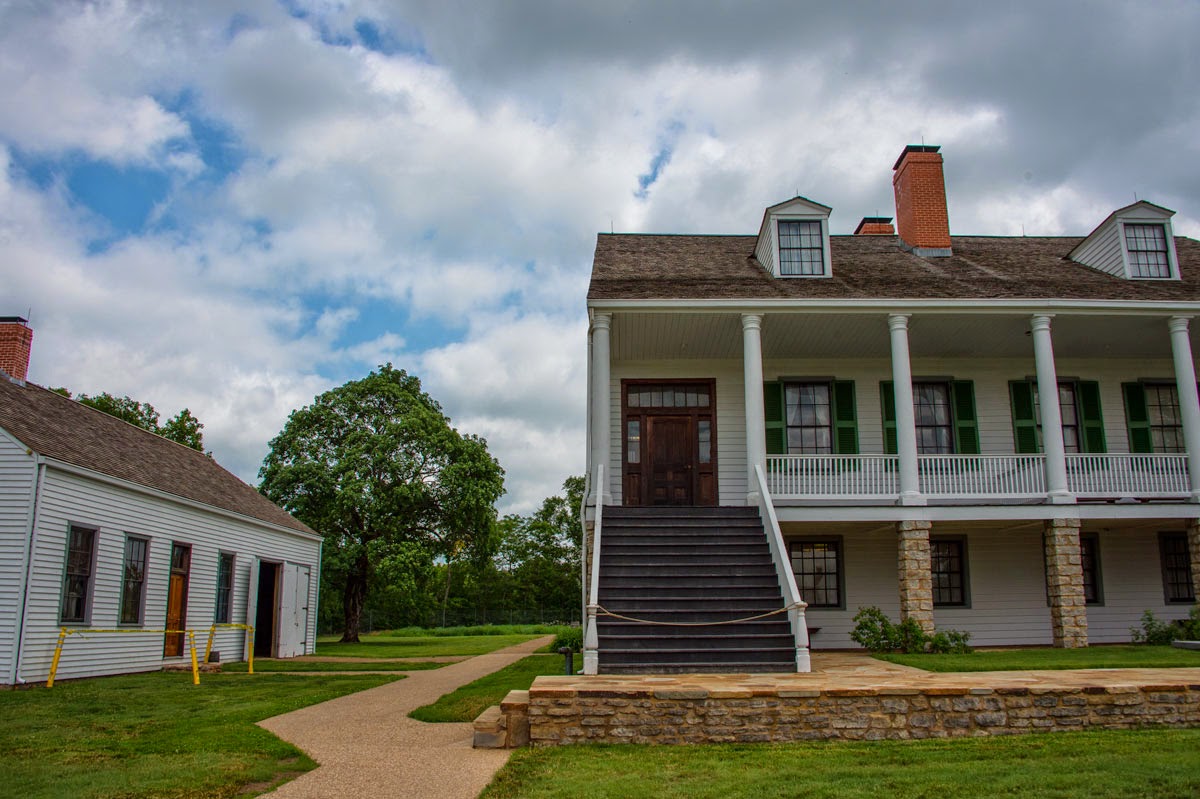 The hotel was completely restored and returned to it's original use as an Officers Parlor. 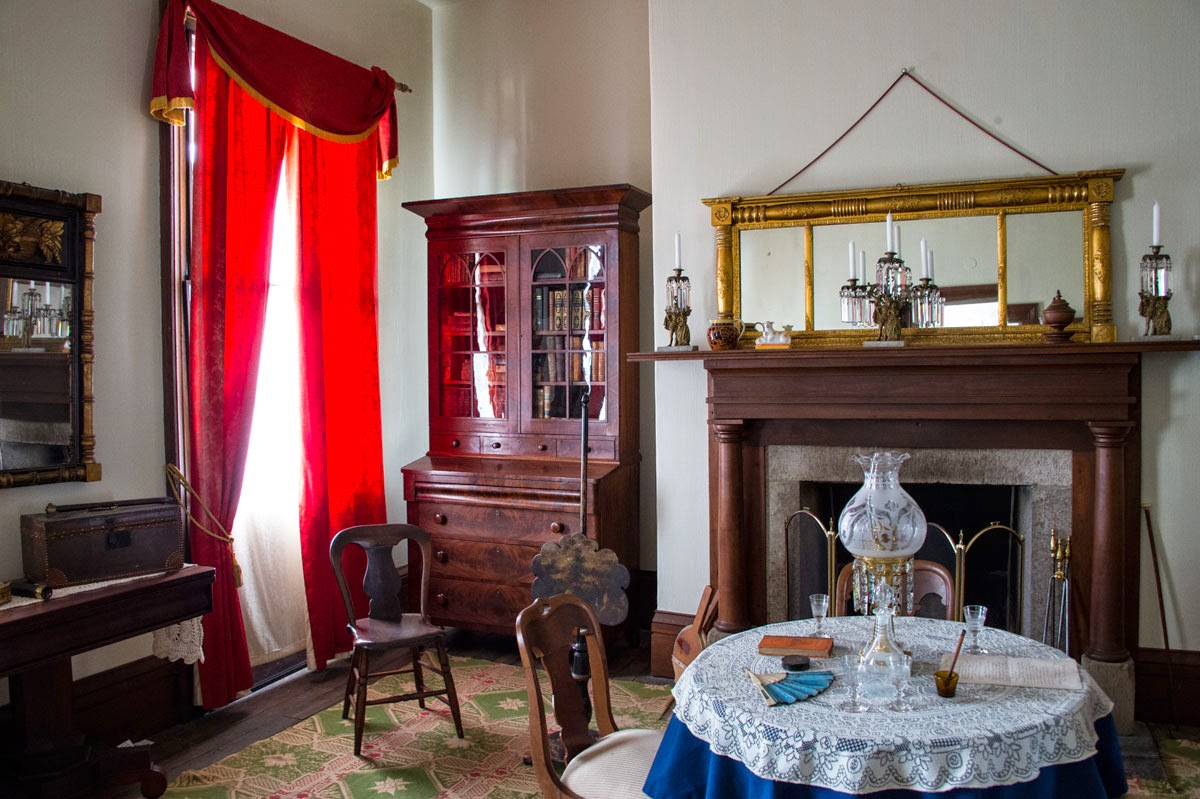 Here's an example of the original wallpaper they found under the wallboard. 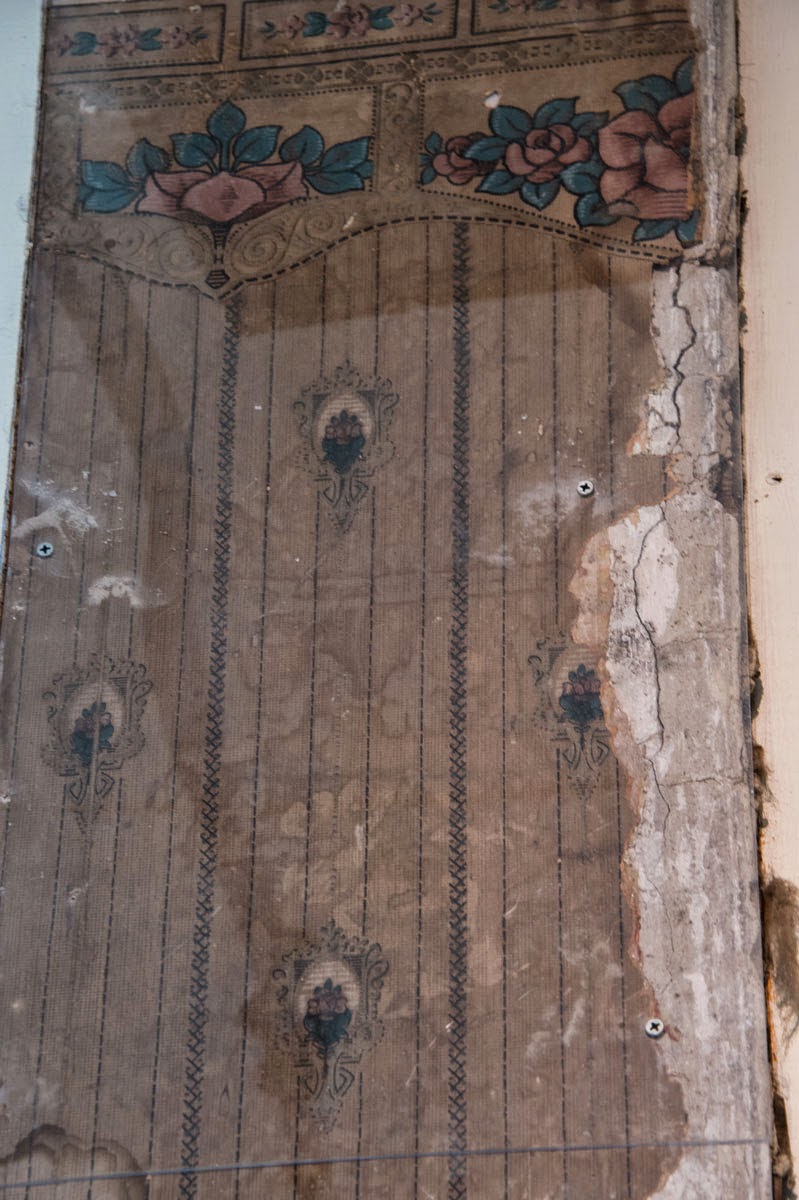 As a supply depot, the Quartermaster was responsible for supplying everything, including flour, sugar, foodstuffs and ammunition. 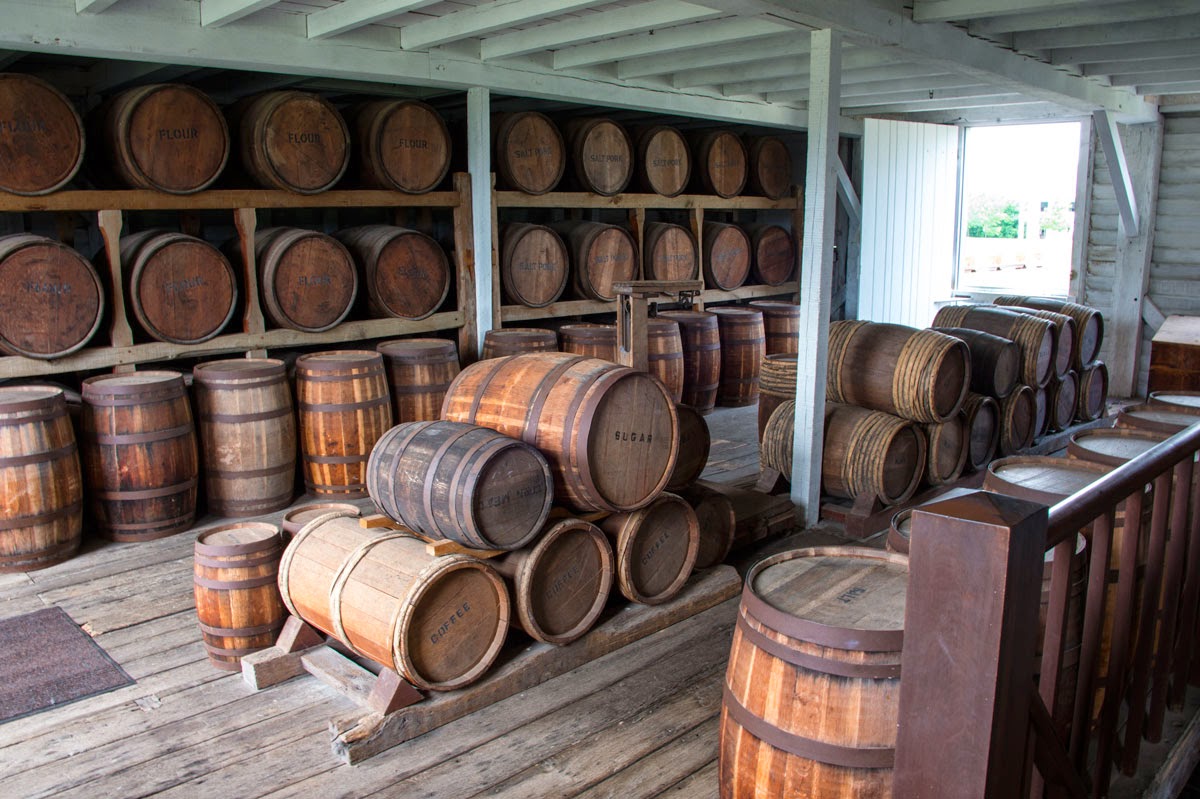 The basement, also used for storage, shows the construction very well.  The floor is just rock piled up upon rock with hand cut timbers holding up the main floor. 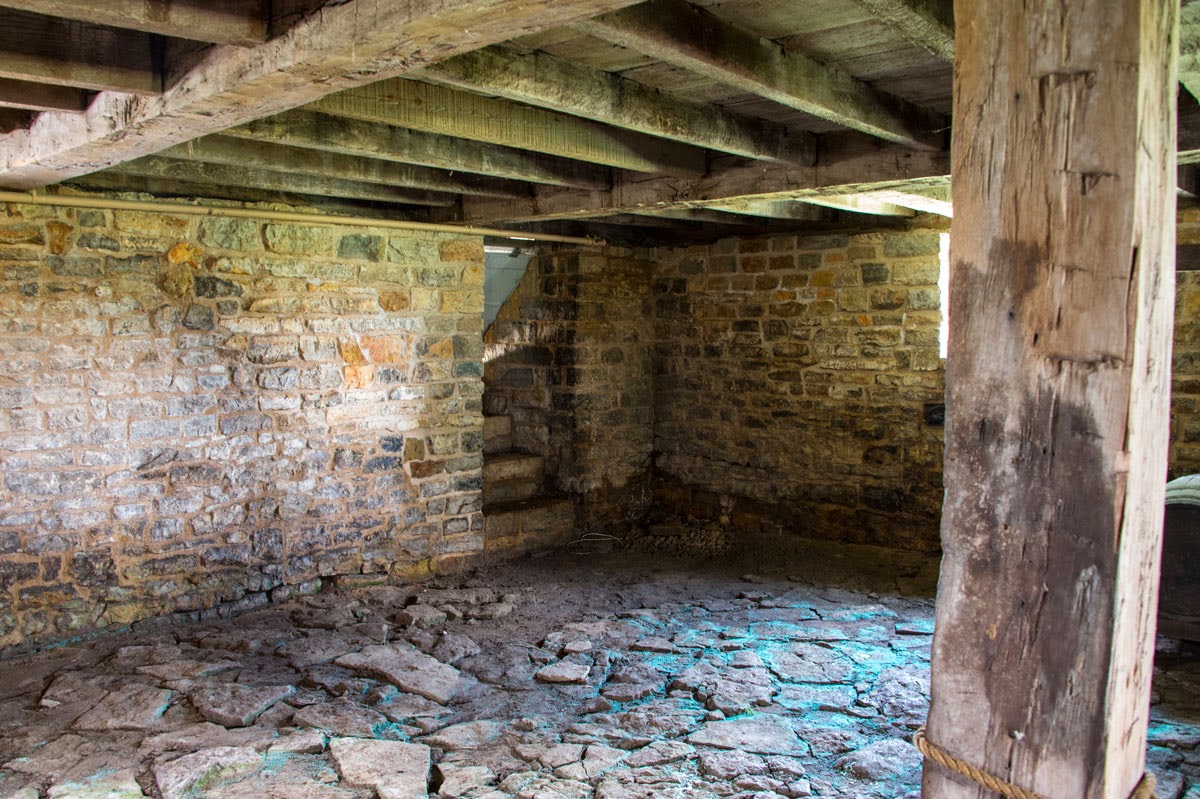 A soldier couldn't live without bread, so this bakery was built from rock in the far corner, just in case of fire. 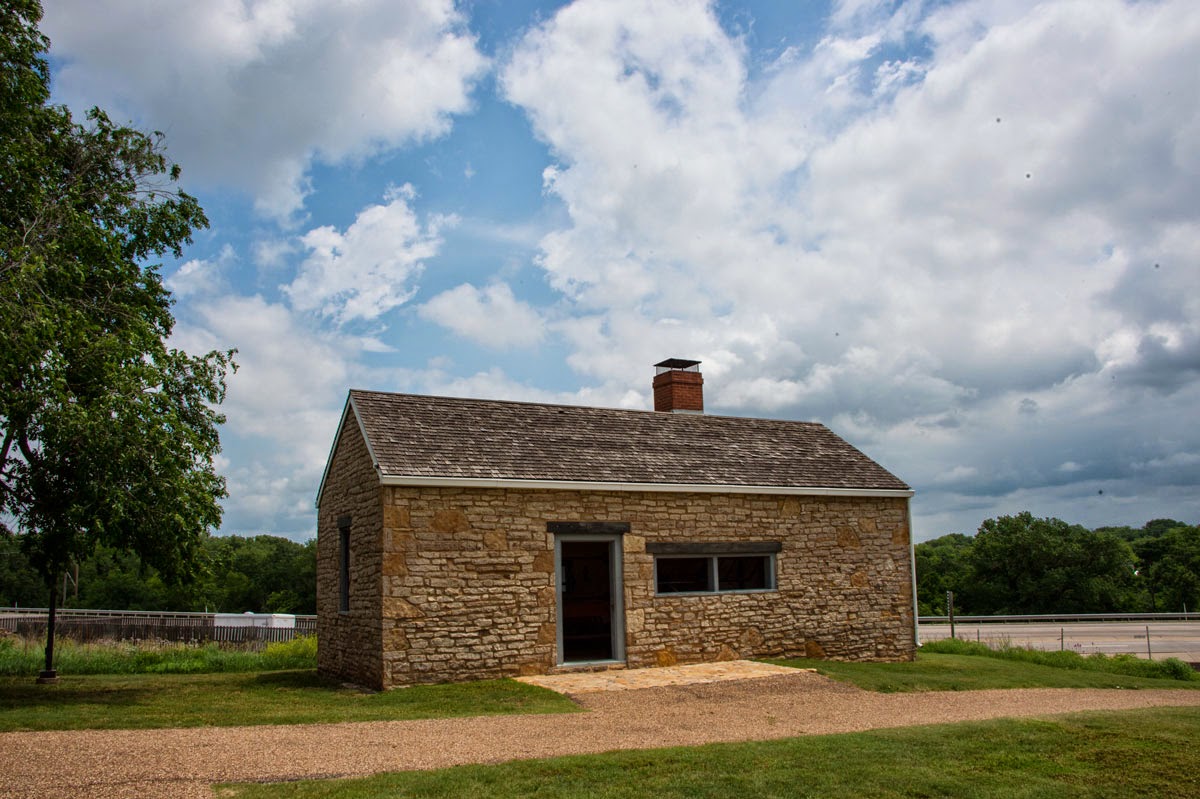 I'm not sure if this huge oven is original or not, but this must have been a HOT occupation!! 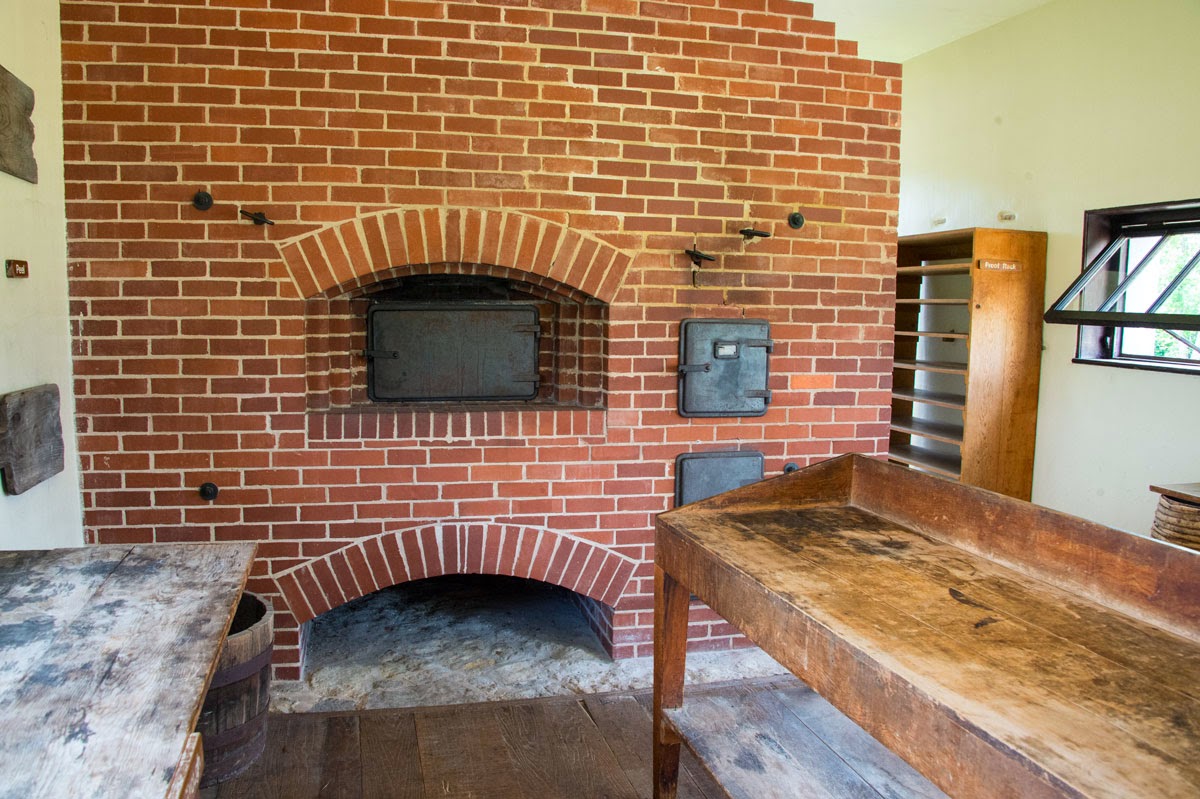 I'm sure you have all wondered where the bathrooms were!!  They didn't have any.  Instead, around the outside of the grounds were latrines ... outhouses to be exact!  THIS is the enlisted mens latrine ... the officers used personal ones behind their residences.  An Officer would NEVER use the enlisted men's facilities. 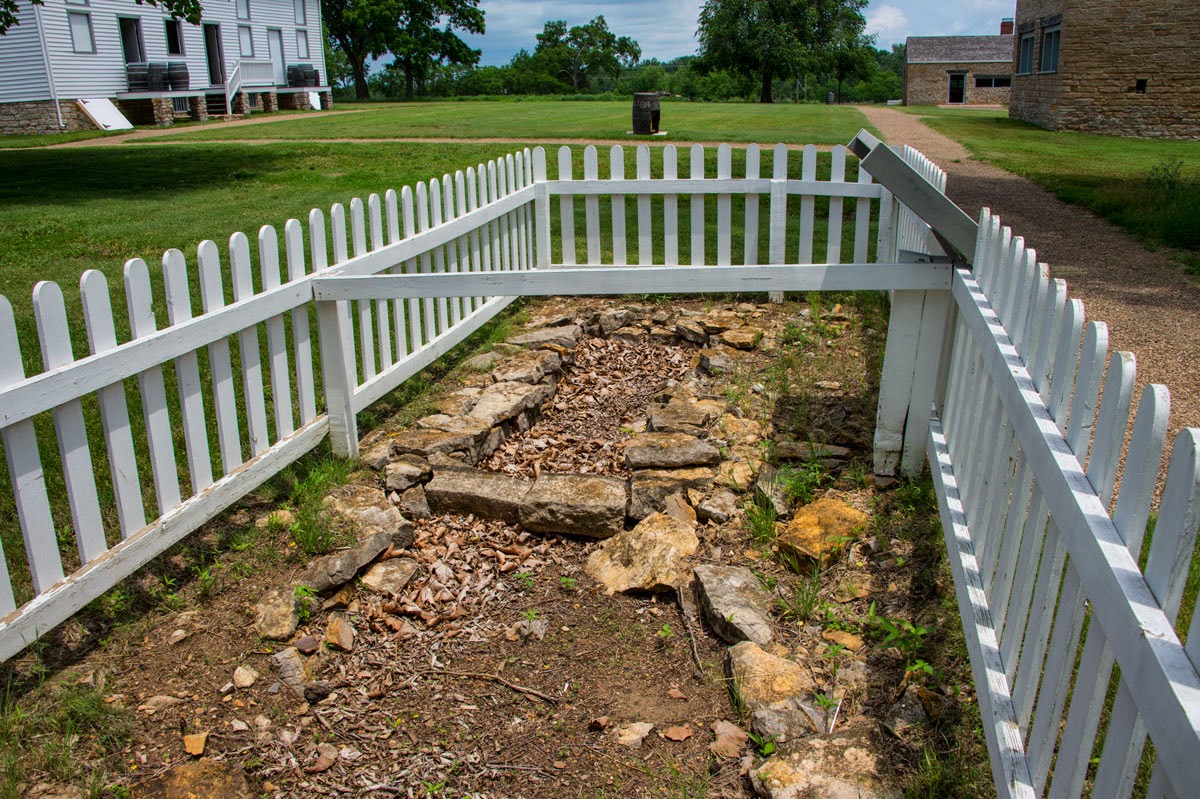 Once we had gone through every building, we hit town for some lunch.  In talking to a UPS driver later (who uses his own car) this town saves all it's old buildings.  Several were being restored as we drove around. 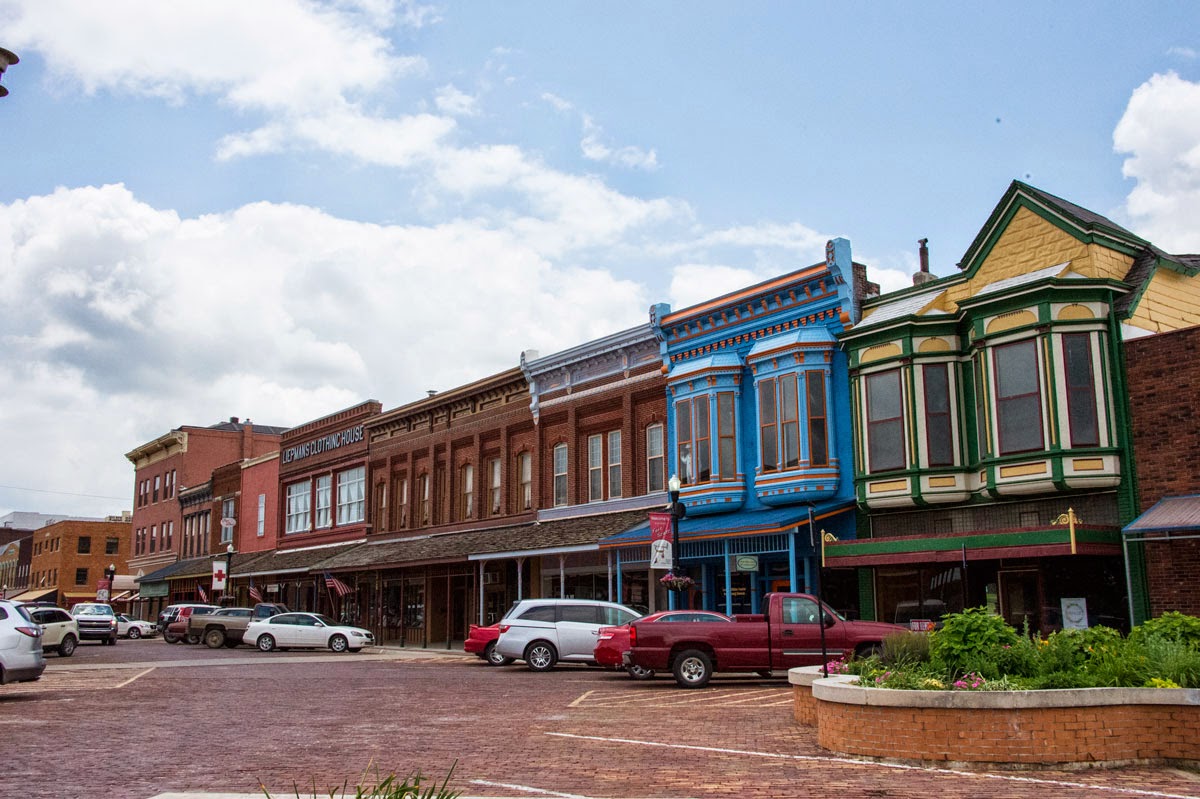 Most of the buildings here are made of brick, as are most of the roads.  That's right, brick roads.  Seems Fort Scott had a huge brick plant, making Ft. Scott Blocks.  Amazingly, almost all of their roads are made of this material, causing front end alignments every few months, according to the delivery guy. 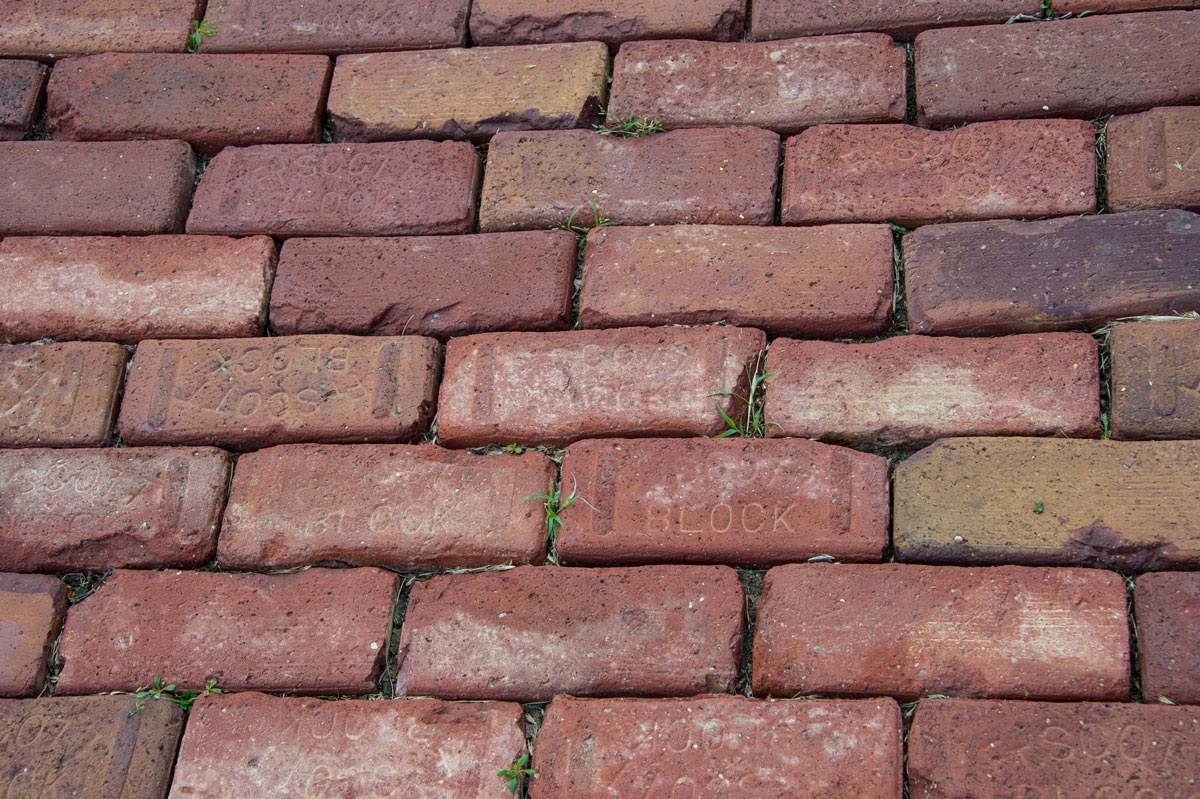 The tram tour wasn't working on this day, so we grabbed a map and did our own little tour of town.  The houses here are spectacular beyond words.  There must have been a LOT of VERY rich people in town.  Although some needed some TLC, most were just beautiful! 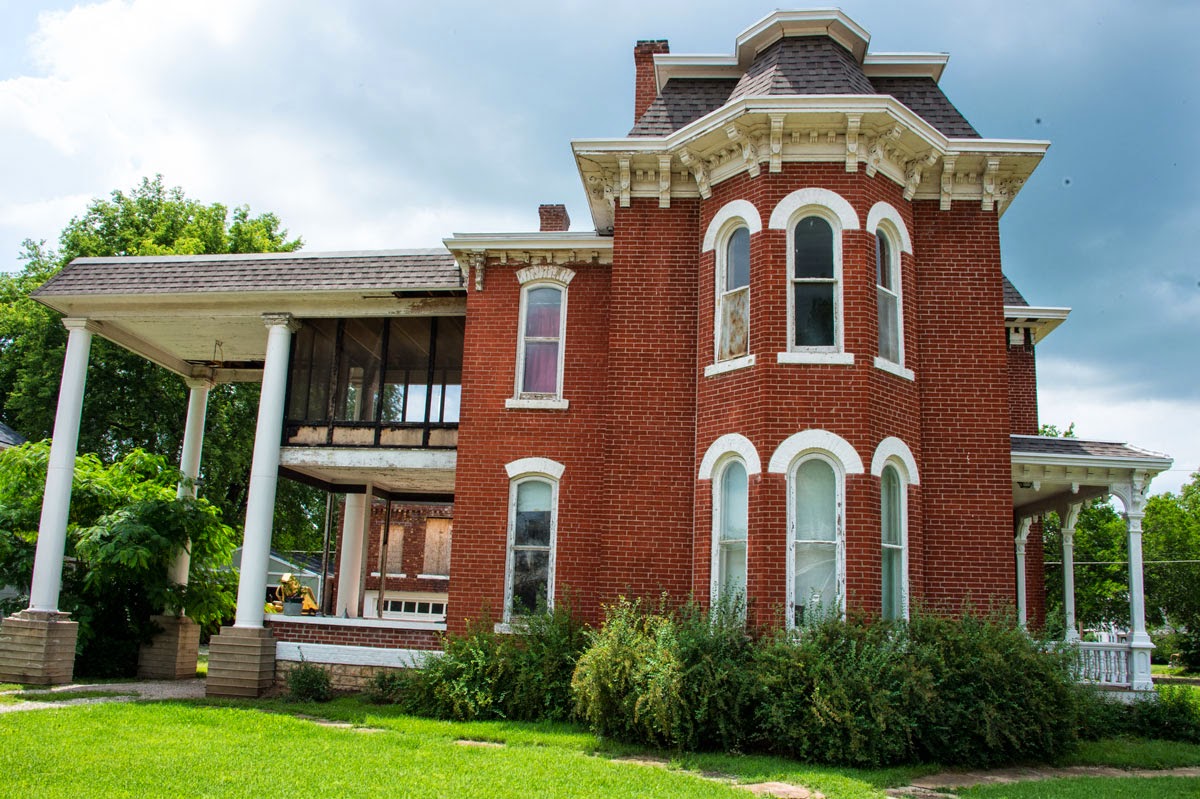 The problem is that these beauties were far apart ... and eventually people moved in next door in much cheaper housing.  You're only seeing the NICE ones here.  They all have large garages in back for the carriage and some have housekeeping quarters. 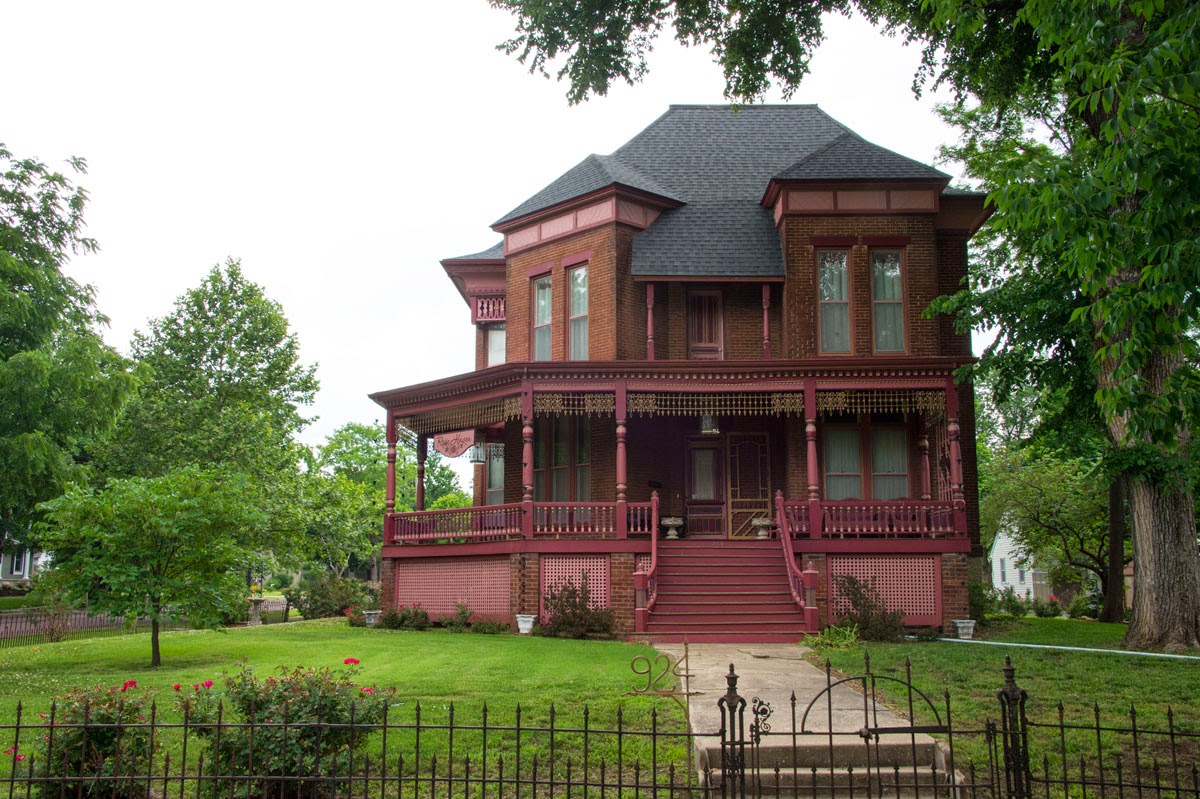 These two houses were built by the same man for his twin daughters.  He built them exactly the same size, just changed a few of the features, so there would be no arguing over who had the best or biggest.  I was hanging out the top of the Westerfield Jeep to get these images, so they may be a little crooked!! 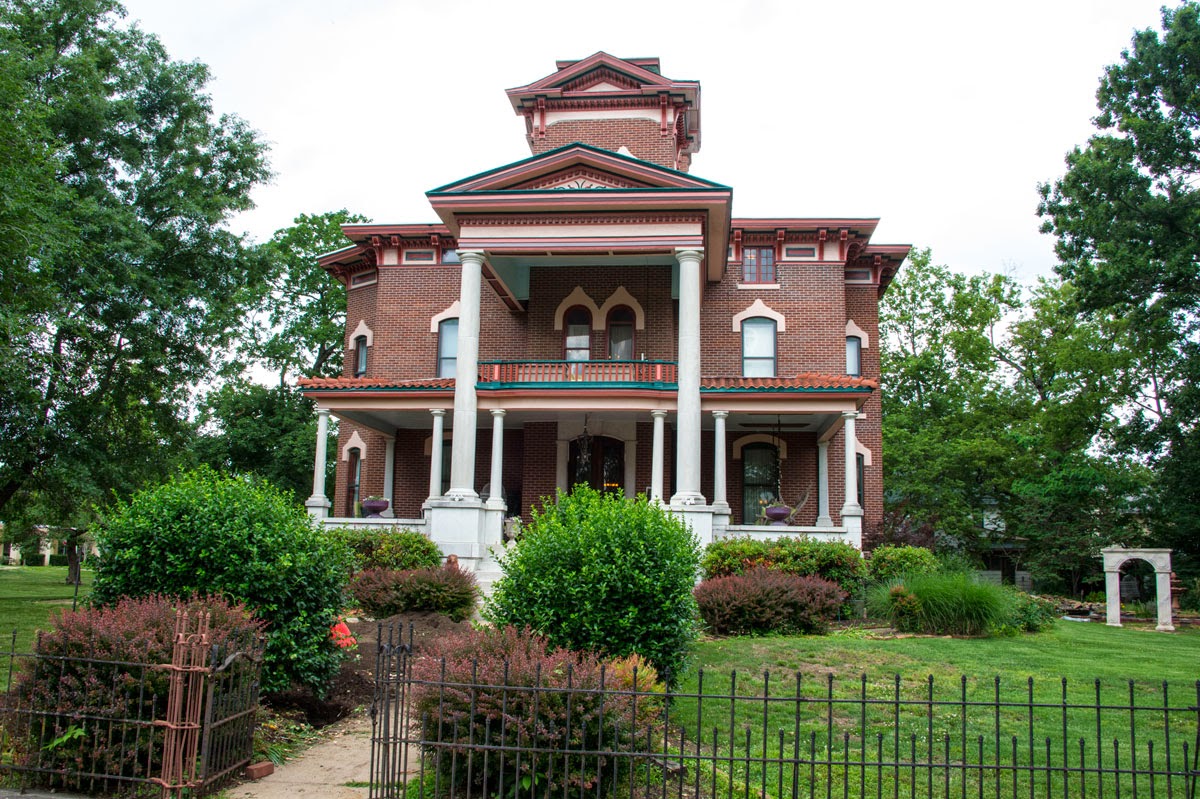 This twin house is now a restaurant, with some renovations and painting being done on the front. 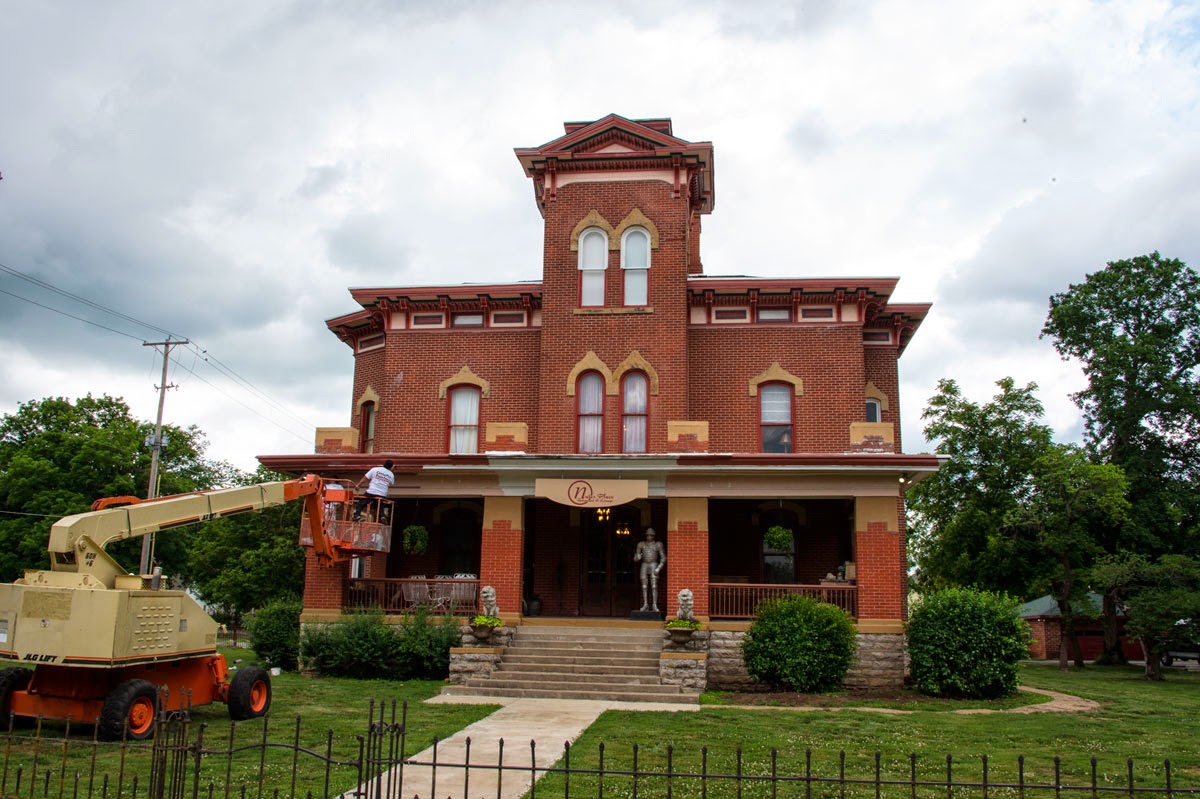 THIS however ... is the most spectacular we saw.  At over 7,000 square feet with 7 bedrooms and 3 baths, it's for SALE!!!!!  It sits on a huge lot ... has two garages in back.  You KNOW I looked this up on the internet immediately and found it to be $299,000.  Are you kidding me???  I'm selling out and moving to Missouri!!  Tom kept warning me there was a reason it went from the original price of $525,000 in 2009 to it's current price ... and just why hasn't it sold???  The owner has also graciously agreed to sell all the furnishings (which are amazing pieces of art and furniture) along with the house.  I have to agree with Tom, I imagine there are some structural problems!!  If I only had the nerve ....... 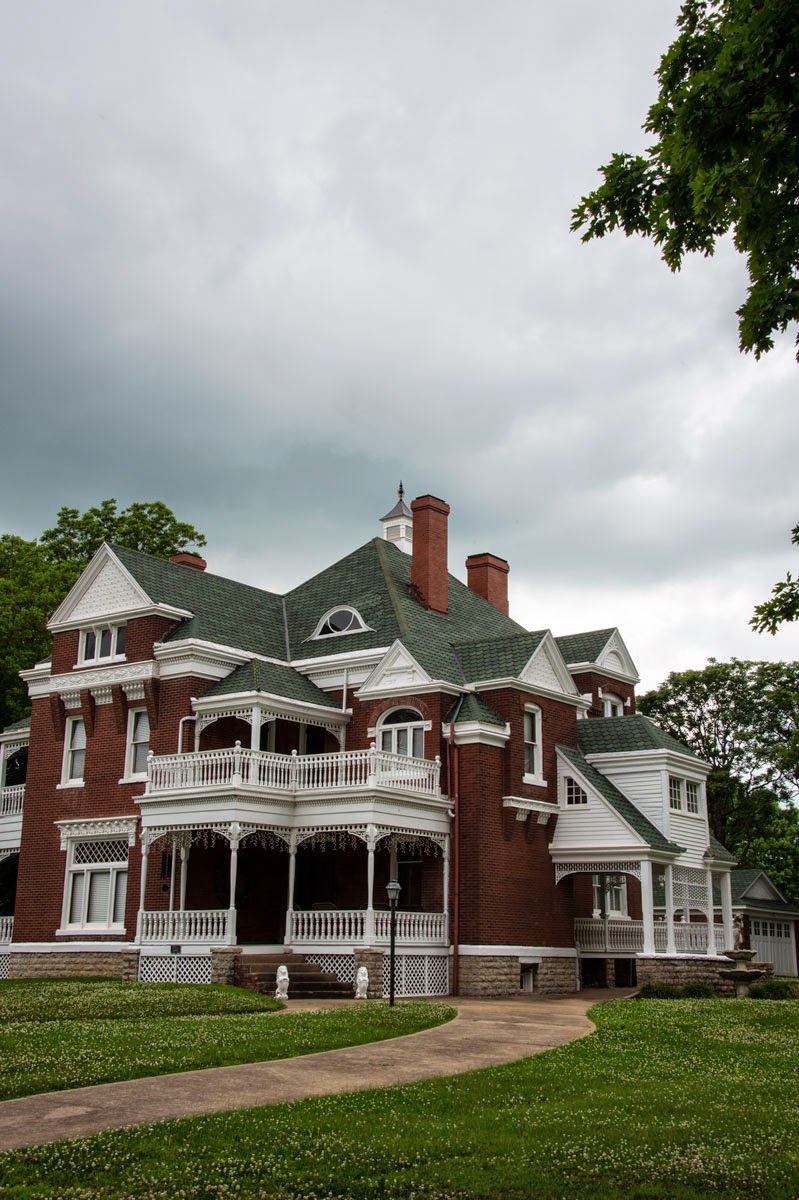 Our final stop was at the National Cemetery located here. 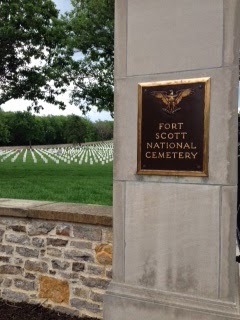 I am presently listening to the thunder roll across the prairie.  Haven't seen any lighting yet, but will have my camera ready ... oops I spoke too soon.  Wish us luck!!!