Boy, the numbers don't get much smaller than 26!!  We are currently parked at the Elks Lodge, but   I'm getting ahead of myself!!

After a lovely long drive under cloudy skies and lots of rain, we arrived in Jefferson City Thursday evening. 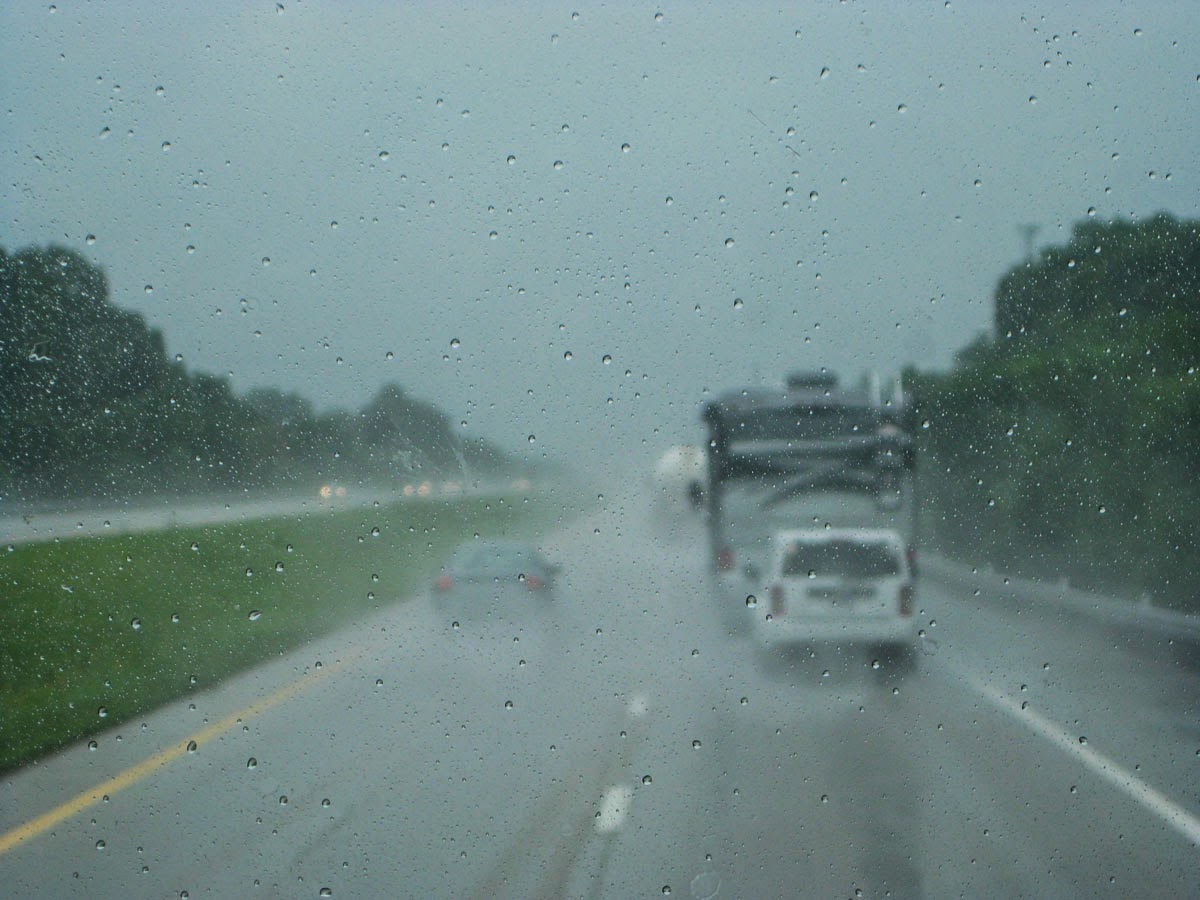 Last you heard, we were in a Campground in Jeff City, that now has a name.  East of town off Hwy 50 is Osage Campground, with pull-through sites for $24.50 a night.  Unfortunately, I had no internet, only 1-2 bars on my phone and due to trees, no satellite or antenna TV.  It wasn't a problem however, as we spent all our time sightseeing.

This is the State Capitol of Missouri.  Apparently some time ago someone made a law that the capitol had to be within 40 miles of the Big Missouri River.  Built in 1912, it not only houses the legislature, but a great museum.  Just walk right in like you own the place, check in at the Lobby for a map and have fun cruising the halls of government. 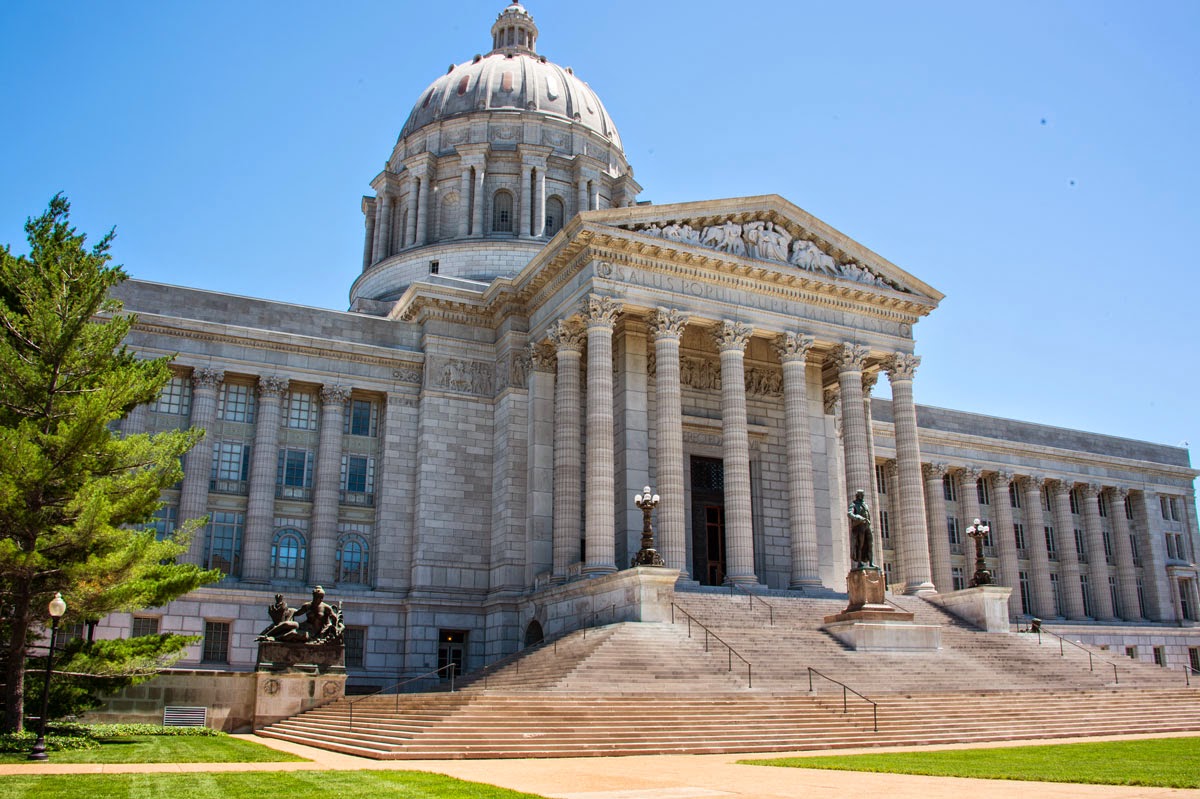 The hallways are pretty spectacular with lots of paintings.  We're on the second floor here looking down on one end of the museum which tells of Missouri's history and the people that settled here. 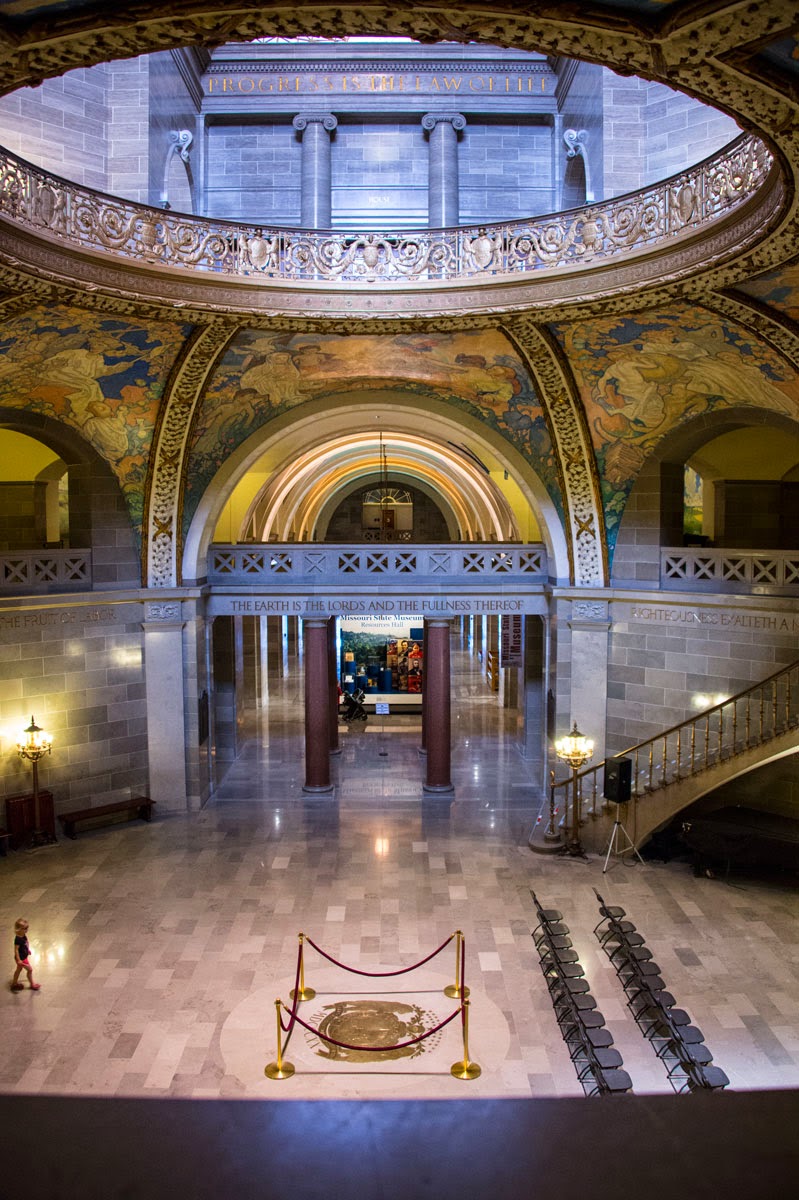 This is the Assembly.  We tagged on to a tour and got to see this beautiful room.  The Assembly only meets for a few months, and they had adjourned, leaving the desks full of papers!!  The stained glass window at the far side is amazing!!  We tried to get in the Senate Chambers, but they were locked up tight!!  Truly, we wandered all over this building and no one gave us a second look!! 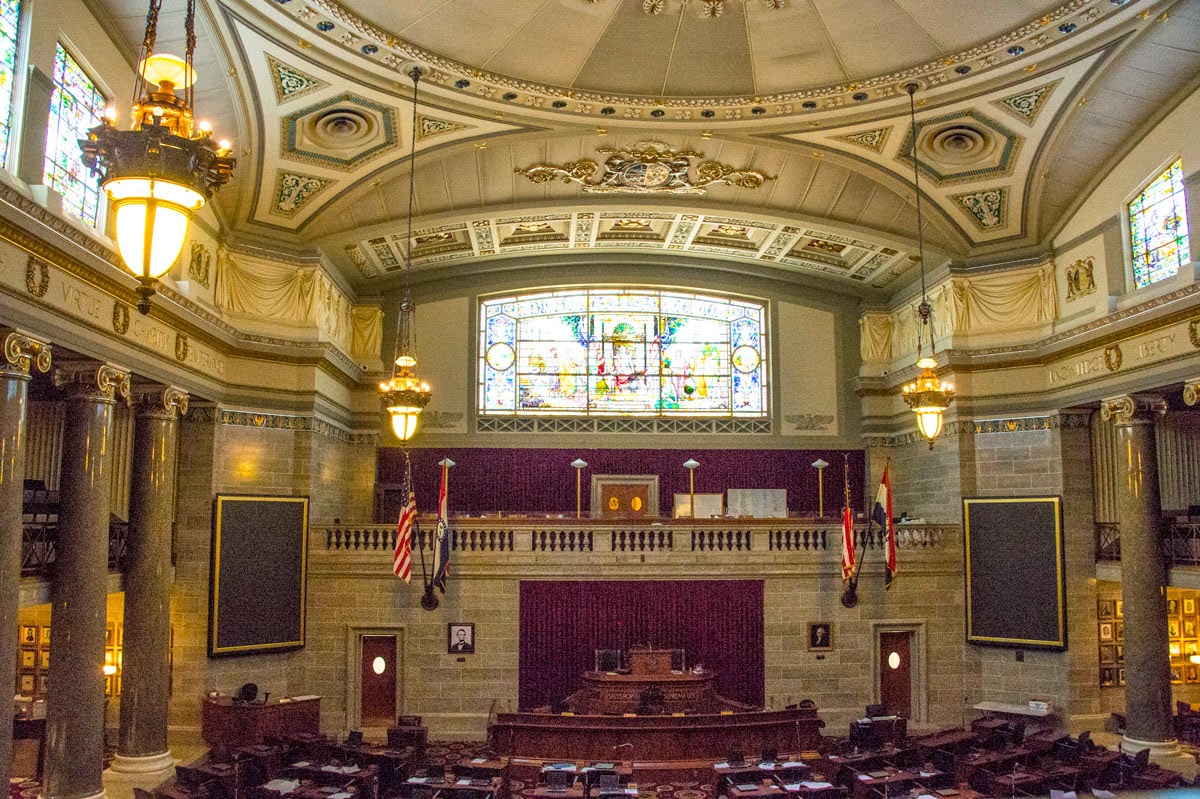 In the museum are lots of artifacts from the Civil War, but there are so many skirmishes, I can't even begin to keep them straight.  In order not to get something wrong and offend the locals, I'm just showing you the stuff I'm more familiar with.  This is the scarf Jesse James was wearing when he was shot to death in 1882. 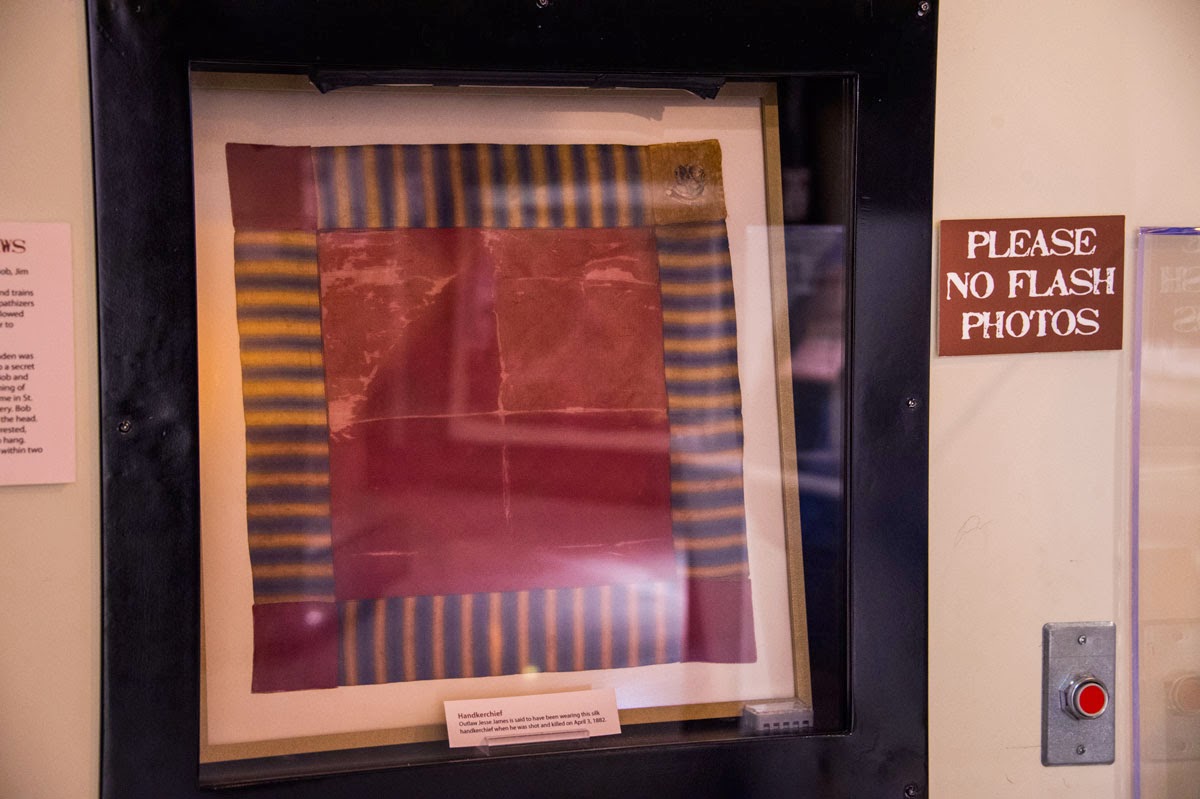 I'm afraid I'll call a Bushwacker a Jayhawker and get thrown out of the State, so here's the gun (in the middle) that Charlie Pitts used in the James-Younger raid in Northfield Minnesota.  When Charley was killed, Cole Younger picked up this gun and used it until he was captured.  The Sheriff kept the gun (isn't that stealing?) and finally donated it to the museum. 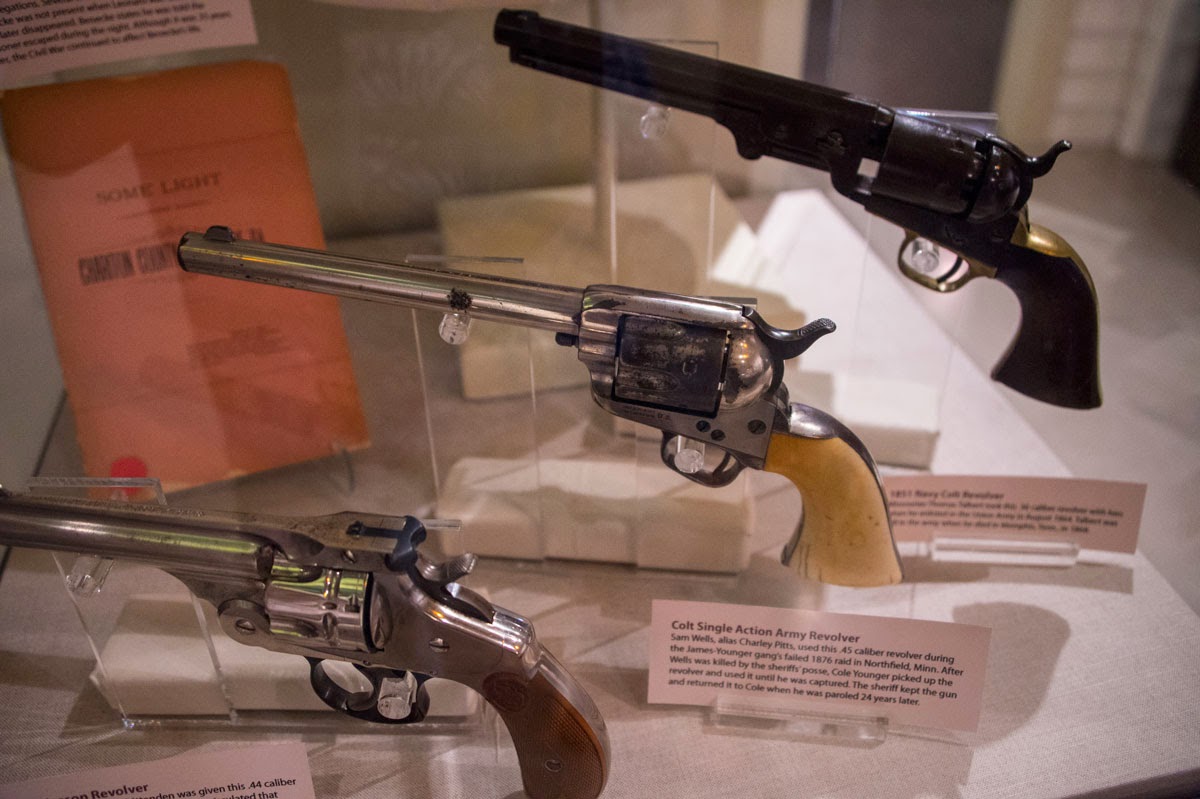 General Marmaduke is shown here, next to his flag, that had too many reflections to photograph, but his story was kind of interesting.  He was a Confederate Army General who later became Governor of Missouri.  You'll hear more of him below. 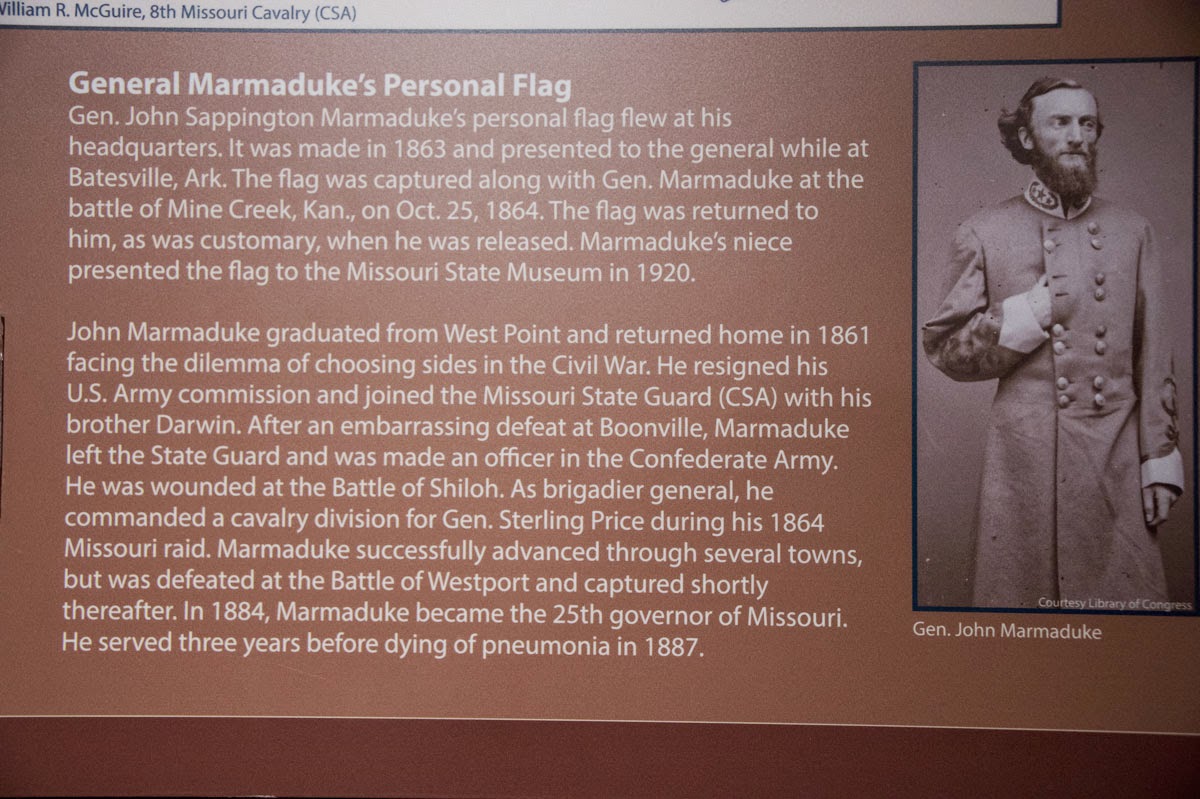 You can enter this room on the second floor by stepping on the mat outside ... the doors will automatically open so you can see this amazing mural painted by Thomas Hart Benton in 1936.  He used egg yolks and powered paint, so you can imagine what it smelled like for the first several months.  For years, many of the Assemblymen and Senators didn't like what he had painted, and put their cigarettes out on the wall.  Scenes of slavery, racism and political life weren't approved by all, but the paintings remain intact today.  Take one of the tours if you can, so they can explain every detail. 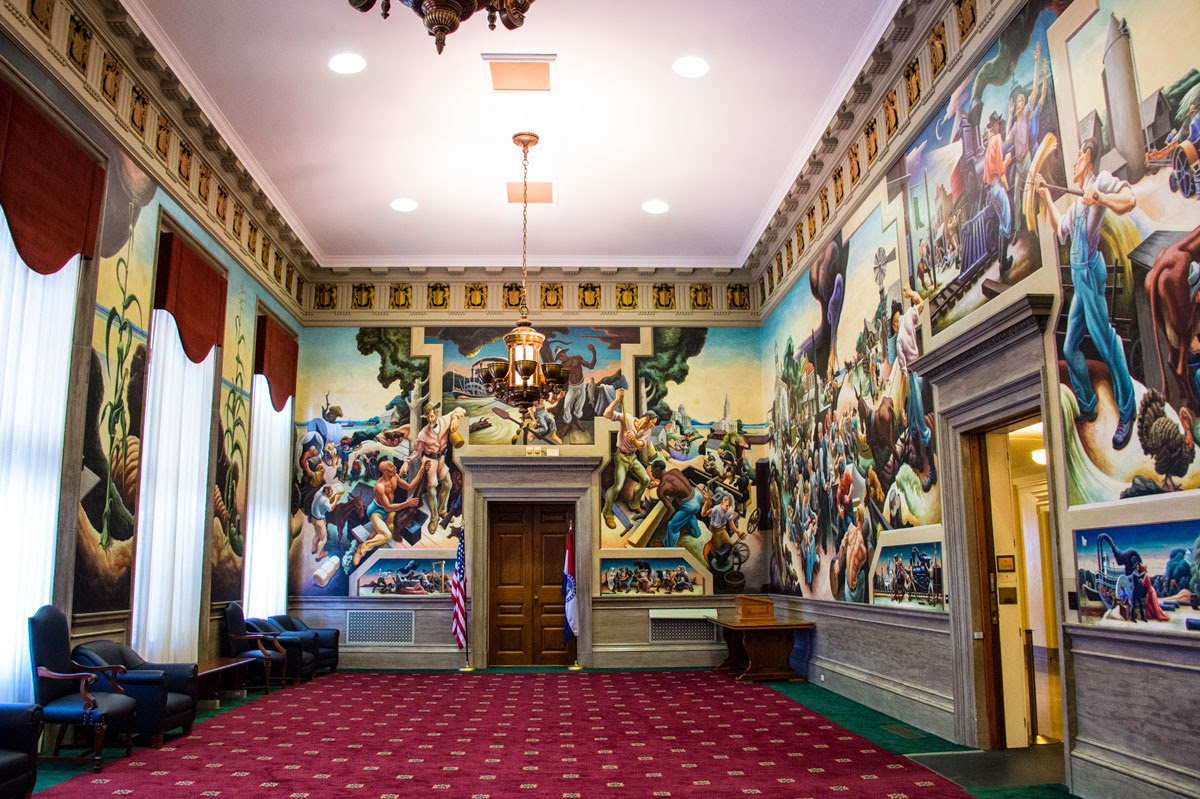 From the Museum, we drove around the corner to the spot where Lewis and Clark landed at this park.  It even has a doggie water fountain!! 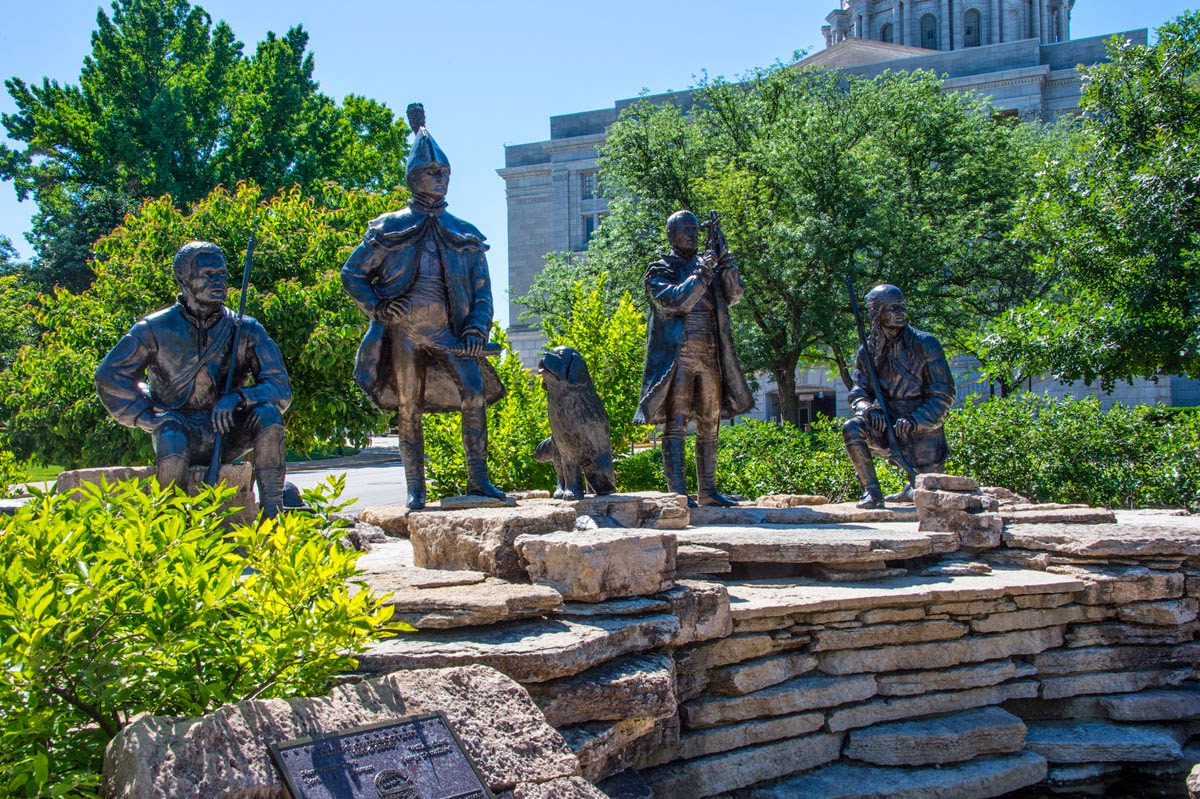 Across from Lewis and Clark's group is the Governor's mansion.  I expected to see someone with a gun come out as I walked around with my camera, but no one cared.  Nice people these Missourians. 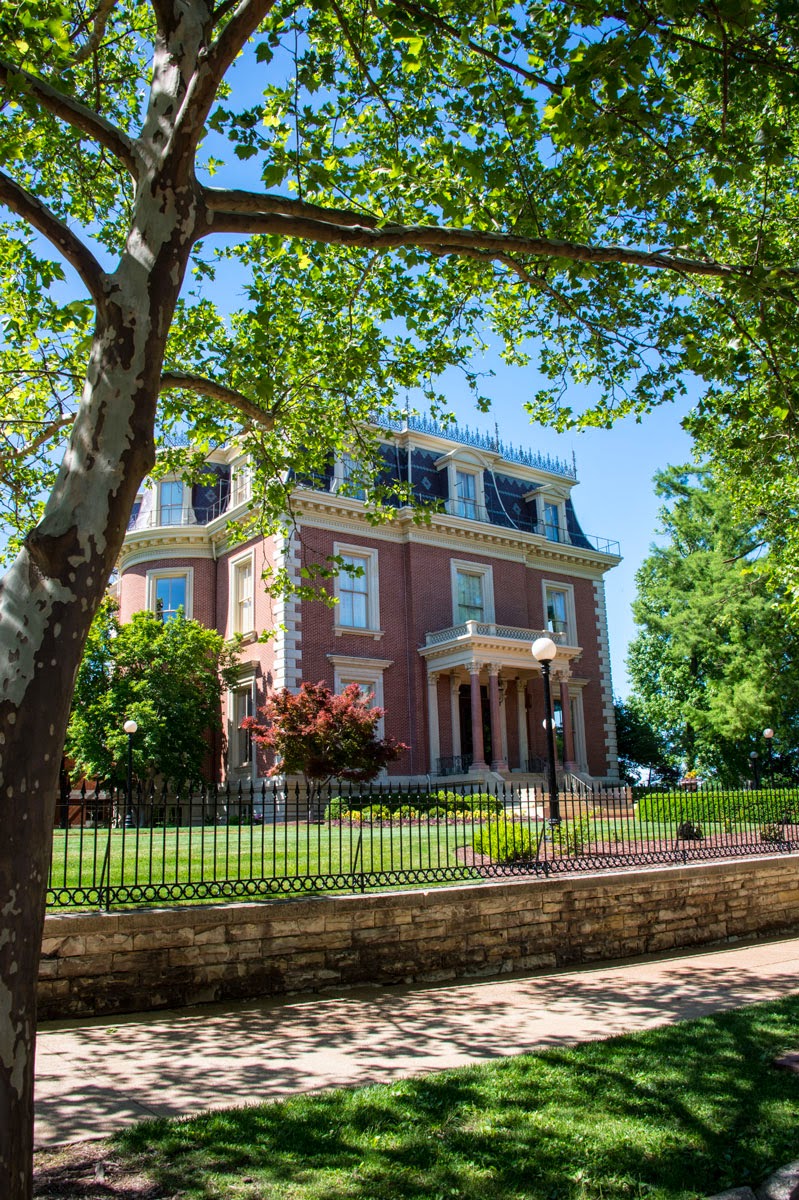 A few more blocks and we arrived at the Missouri State Penitentiary.  In various stages of demolition and construction, the notice on the door said tours were available.  YES!!! 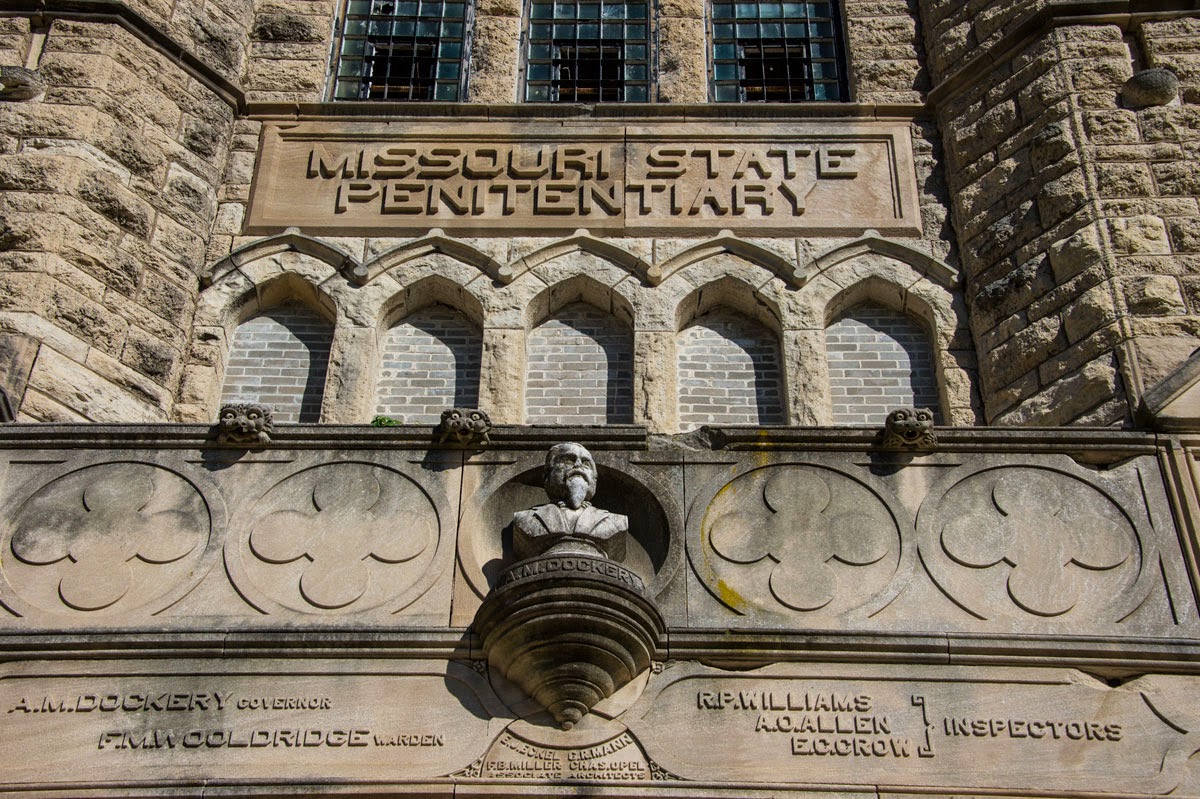 The Friday night 6:00 pm tour was full, but they said to just show up with your money and you would not be turned away.  Barbara gracefully agreed to go with me ... Tom opted to stay at the rigs and come up with bail in case they decided we should stay.  Most of the buildings were built by the inmates with limestone from a quarry on the site. 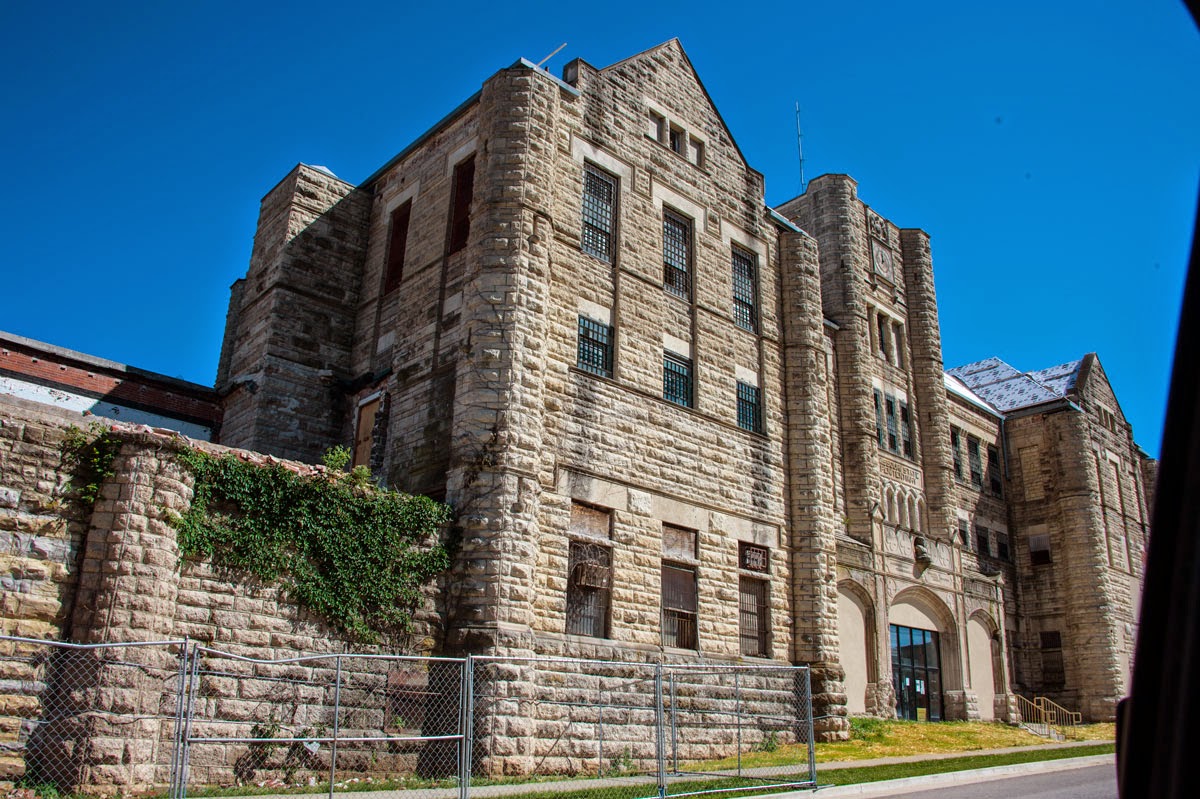 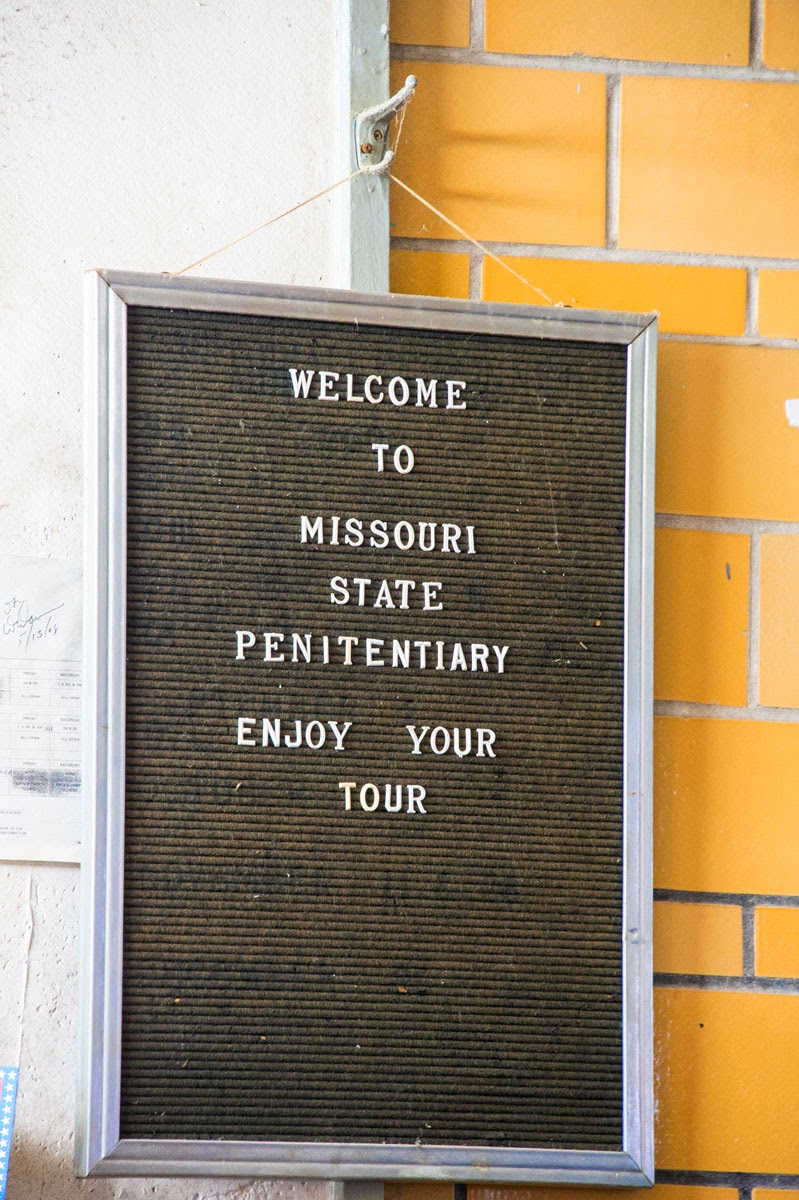 Built in 1836 when the Alamo fight was going on, it was continuously in use for 168 years and closed in 2004.  This is the back door, but going out here only got you to the razor-wire surrounded yard. 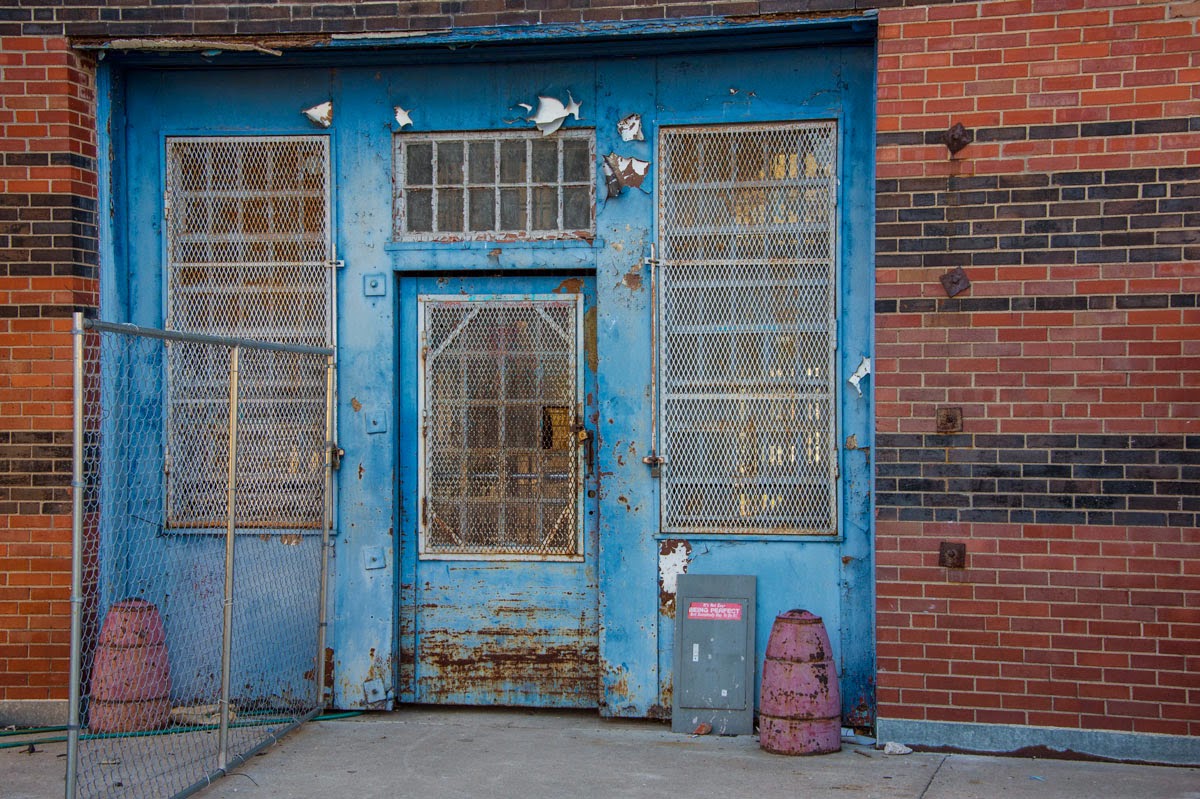 In 1868 coal heat was finally installed for the 700 inmates in this original building.  There were no bathrooms, sinks or bathtubs.  The two bucket system was in use here ... one bucket for water and one for the toilet. 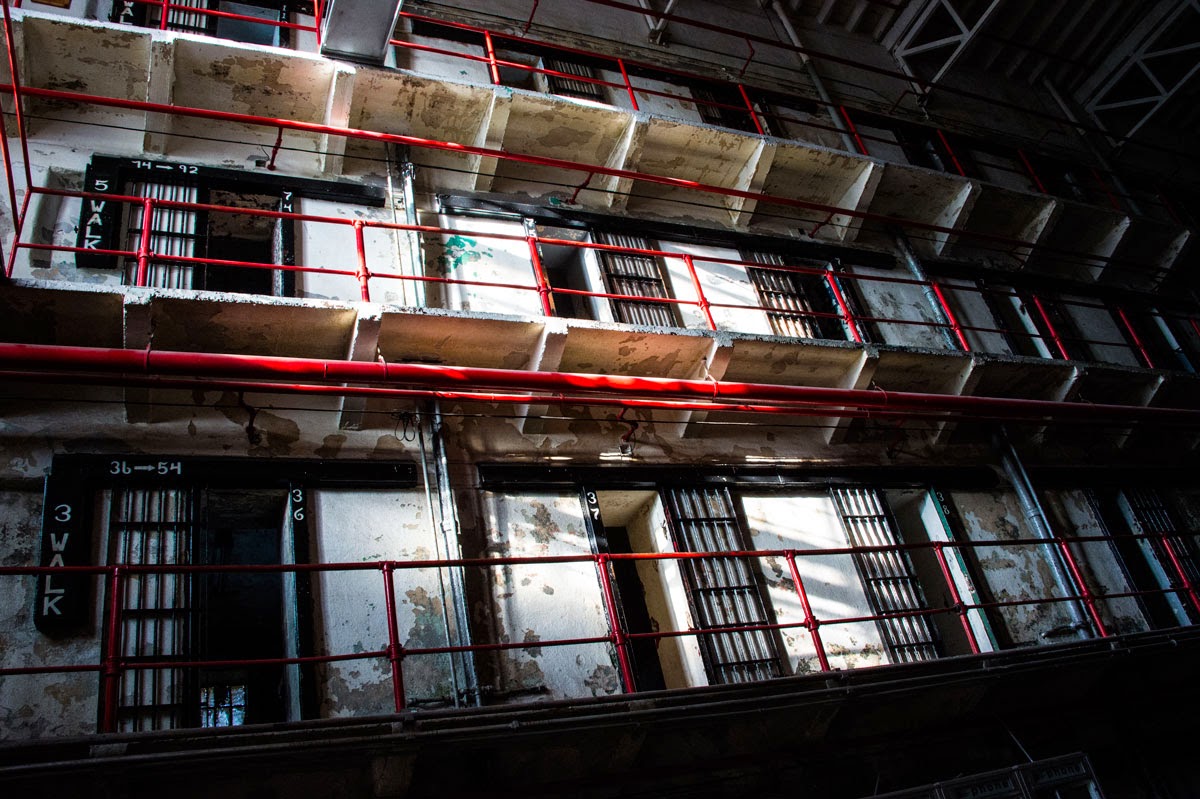 There were no showers ... they washed up in the troughs placed in the yard outside.  One interesting thing they sold in the canteen was paint.  They were allowed to buy paint to decorate their cells!! 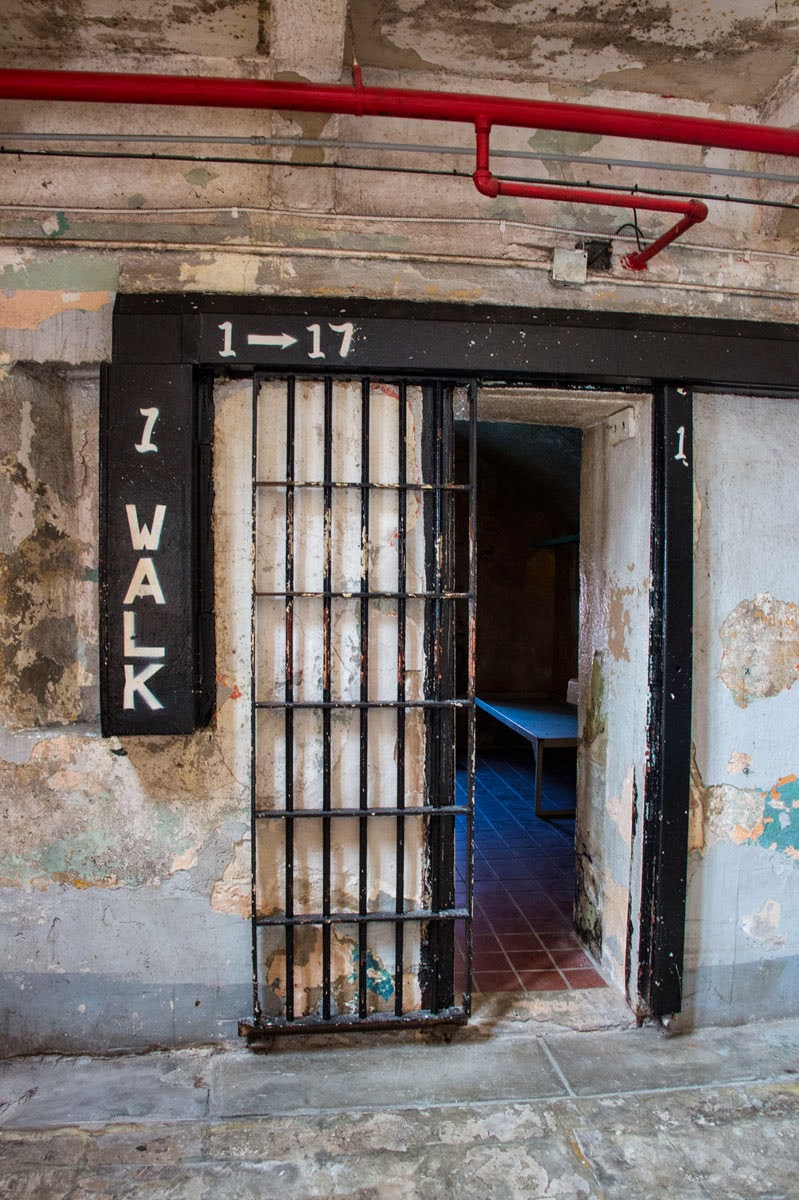 Sunny Liston spent time here in Cell #33, arrested for robbery in 1950.  It was here that he learned to box, eventually he was paroled and went on to become World Champ!! 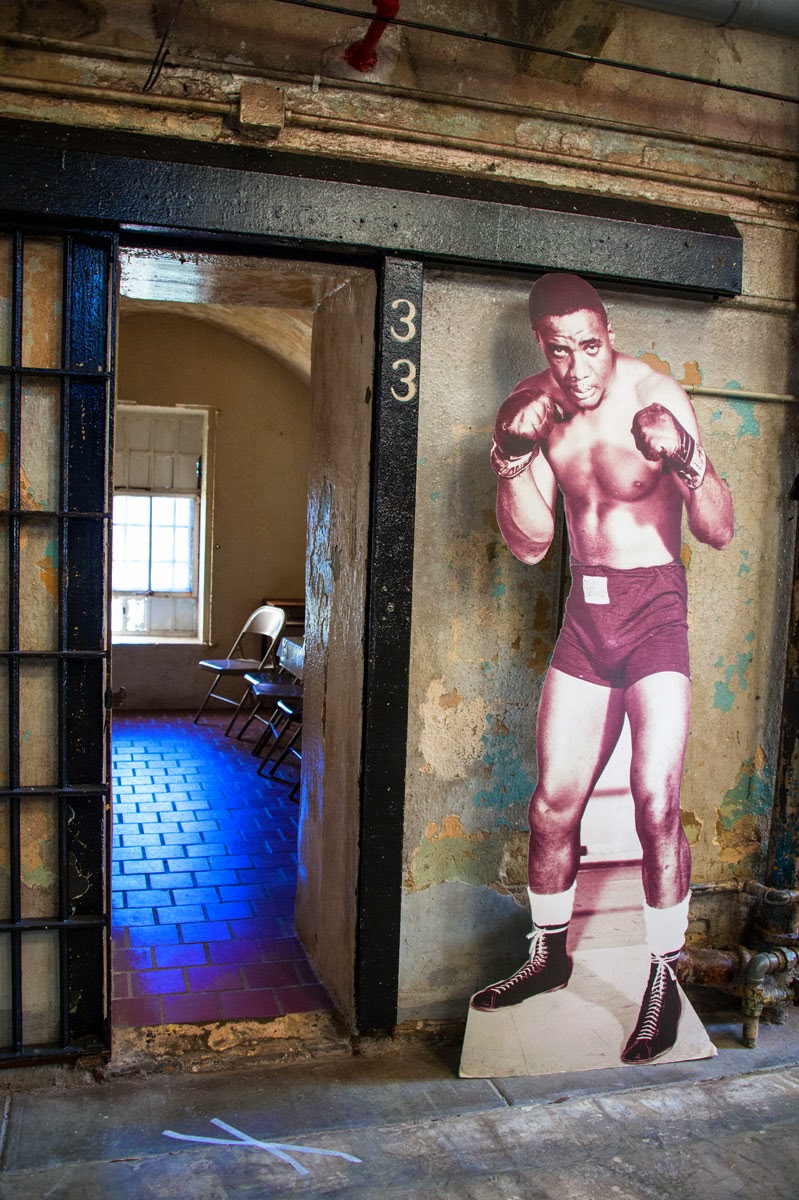 Probably one of their most notorious residents was James Earle Ray, who broke out of jail by hiding in a bread box full of bread baked in the prison bakery, being delivered in town in 1967.  It was a year later that he killed Martin Luther King, thinking he was a hero!!

Plumbing was finally installed, but all the pipes had to be out in the open, as drilling through the limestone was not possible. 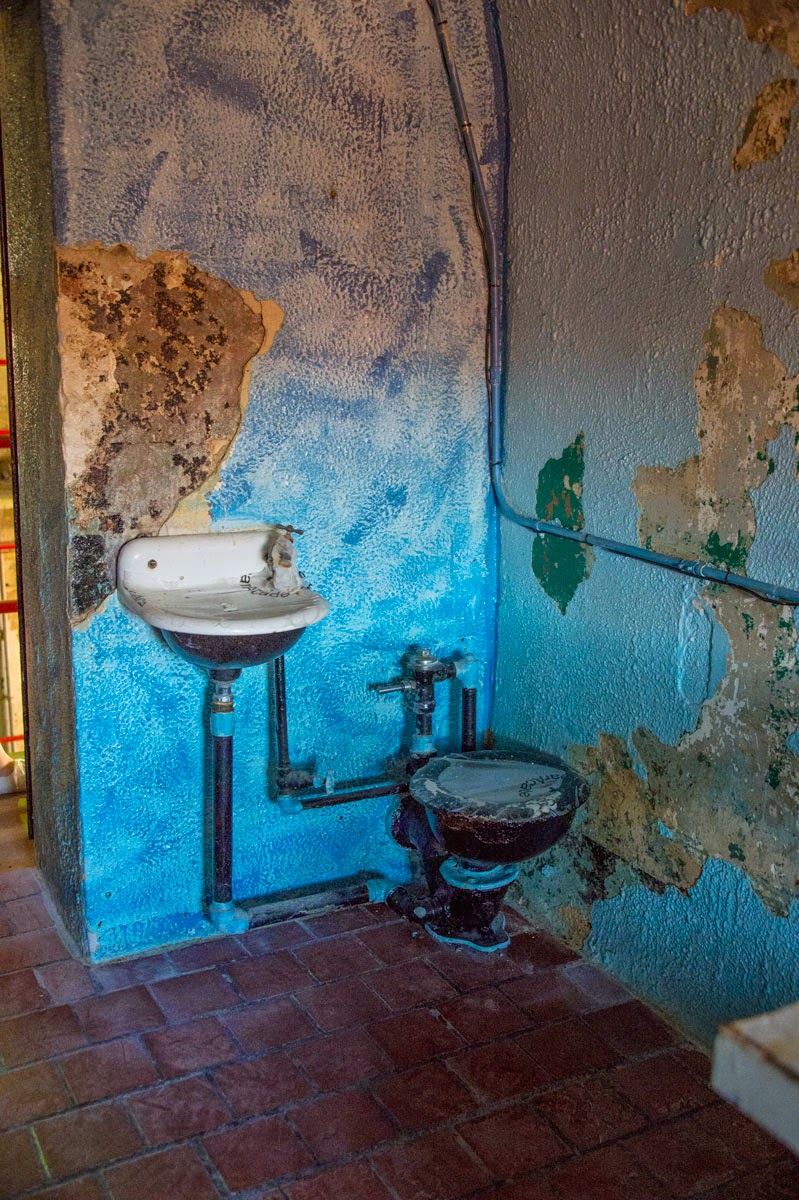 I have to add a disclaimer here .... if you do not believe in capital punishment, you may not want to read further.  There are a couple of images that may be disturbing to some people.

This picture is taken from the fourth floor.  You are free to wander around all the floors and cells with open doors.  Please don't go in and try to shut the door.  Many are old and rusted without available keys.  You could be there for a long time!!! 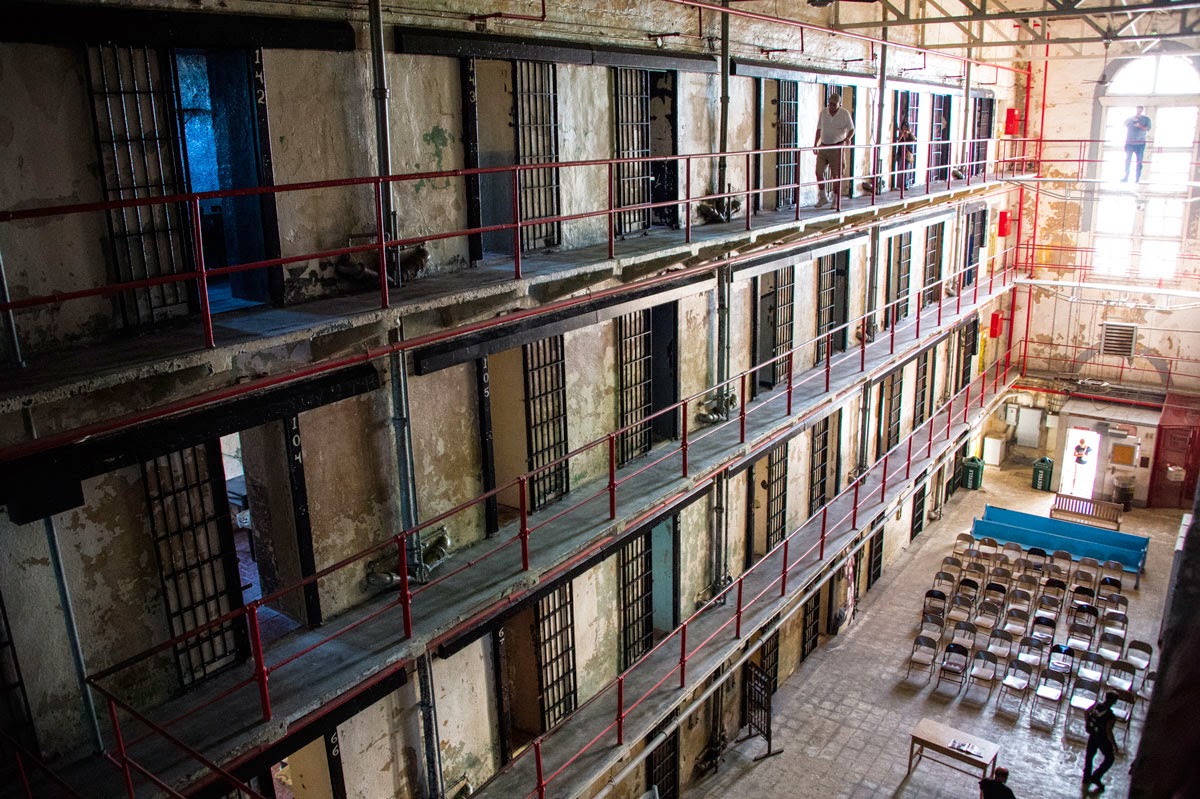 With paint available in the store, many decorated their cells with beautiful images like this one. 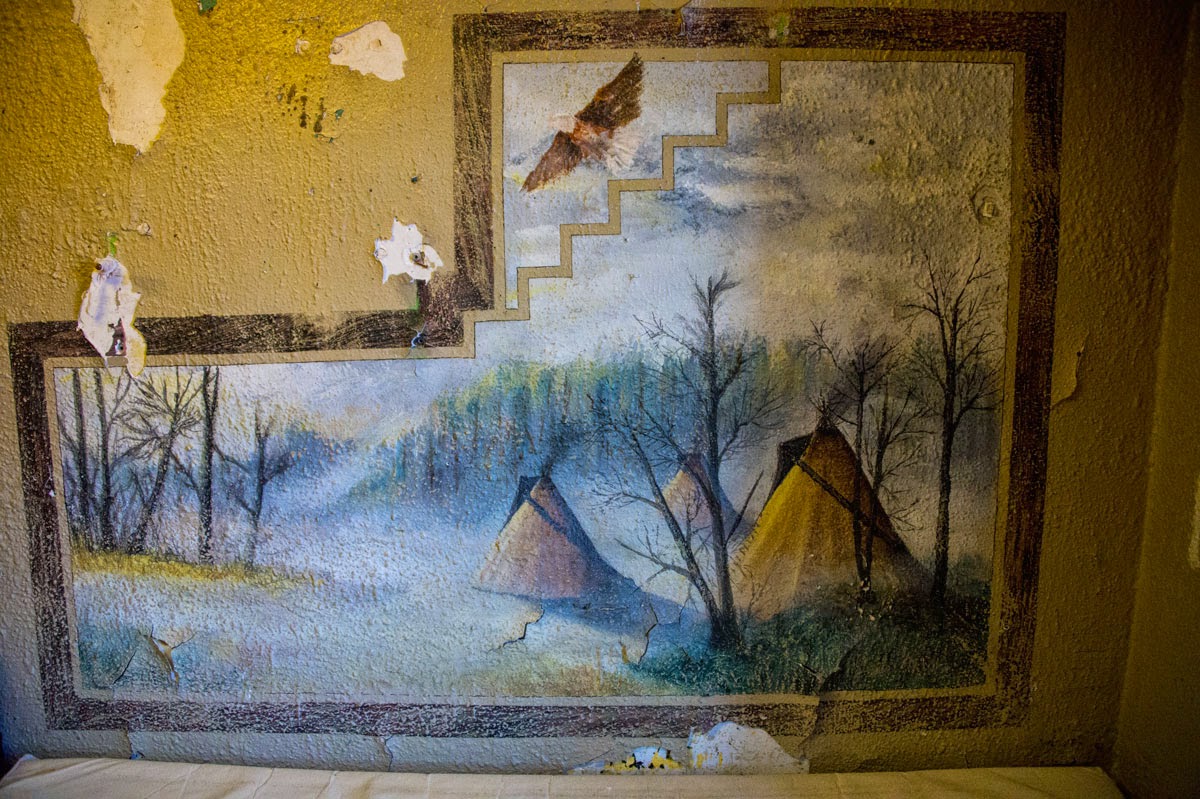 Those that didn't follow the rules were relegated to the dungeon.  Yup ... it's a real dungeon!!  In the 1800's it had a whipping post in the middle of the room.  Once locked behind this door, you had no light, one piece of cornbread a day and two buckets.  As many as 13 were locked in one cell. 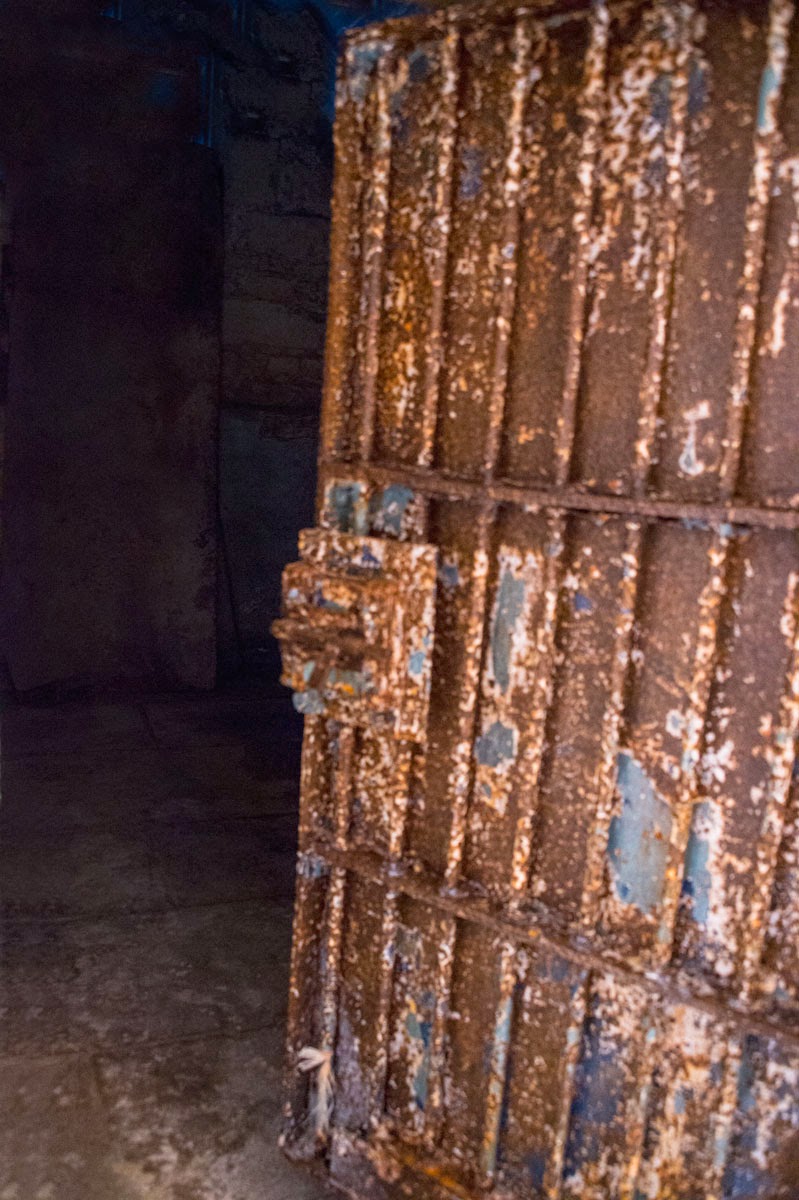 This is a good picture of the quarters.  They put us in three of these cells and turned the lights outs.  Claustrophobia started creeping up my back, but luckily they hit the lights before I came unglued!!  In later years, two large showers were built in the center area and the whipping post removed. 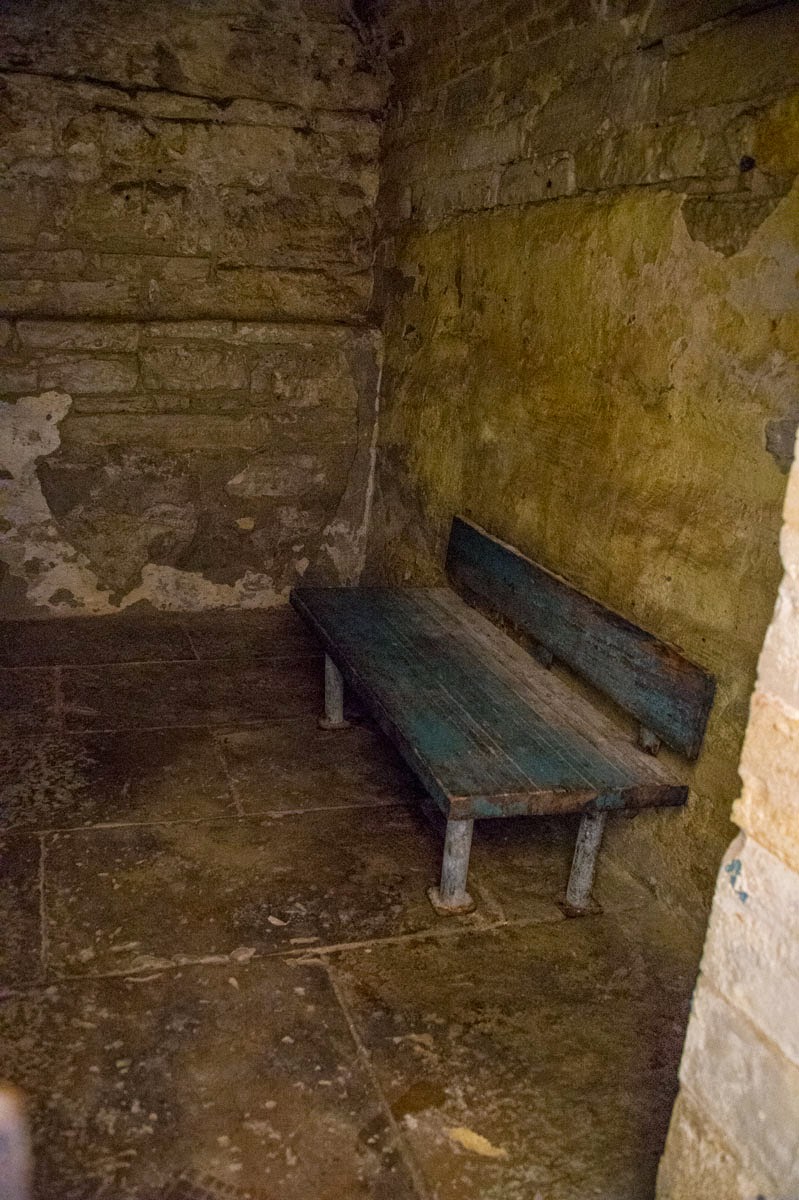 There were lots of bad guys living here, but I didn't hear any stories that backed up the reputation accorded this prison by Time Magazine as the "bloodiest 47 acres in America".  This rather strange statue was built by the prisoners as a memorial to those who had died here, including many who were executed.  The brown spot, kind of in the middle, is the largest groundhog I've ever seen!!! 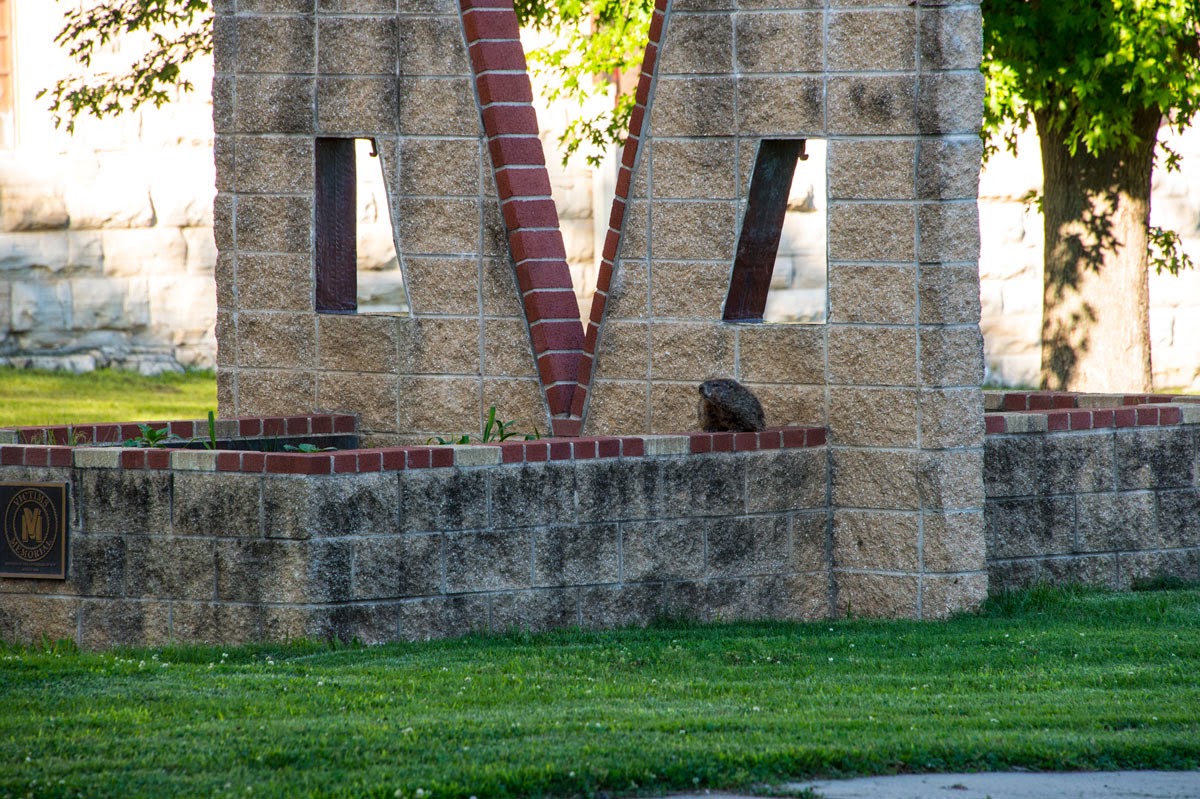 This is the gas chamber.  There were 40 executions at this prison, most in the early 1930's and 40's.  In 1989 the final execution here was by lethal injection.  The cyanide gas was too unpredictable, and since it had to be vented into the surrounding air, all the nearby houses had to be evacuated.  By the way, General Marmaduke above??  His house is right across the street from the prison yard, visible from where I am standing here. 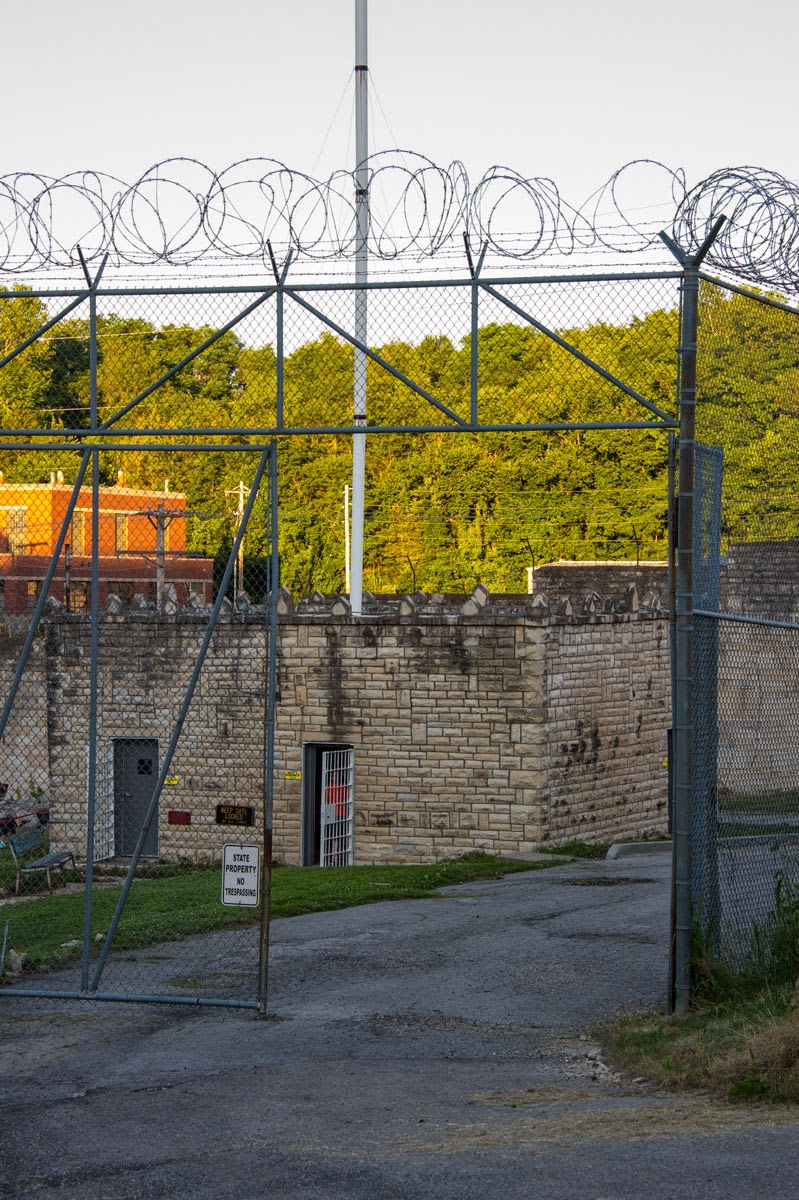 Inside the chamber are two chairs because they did have some dual executions.  Yes, you can sit in the chairs and have your buddy take your picture, but that was just a little too gruesome for me.  Outside are the two handles pulled to release the cyanide into the acid below the chairs.  On the wall is a large board with the pictures, names and charges of each of the 40 individuals.  Pretty sobering!! 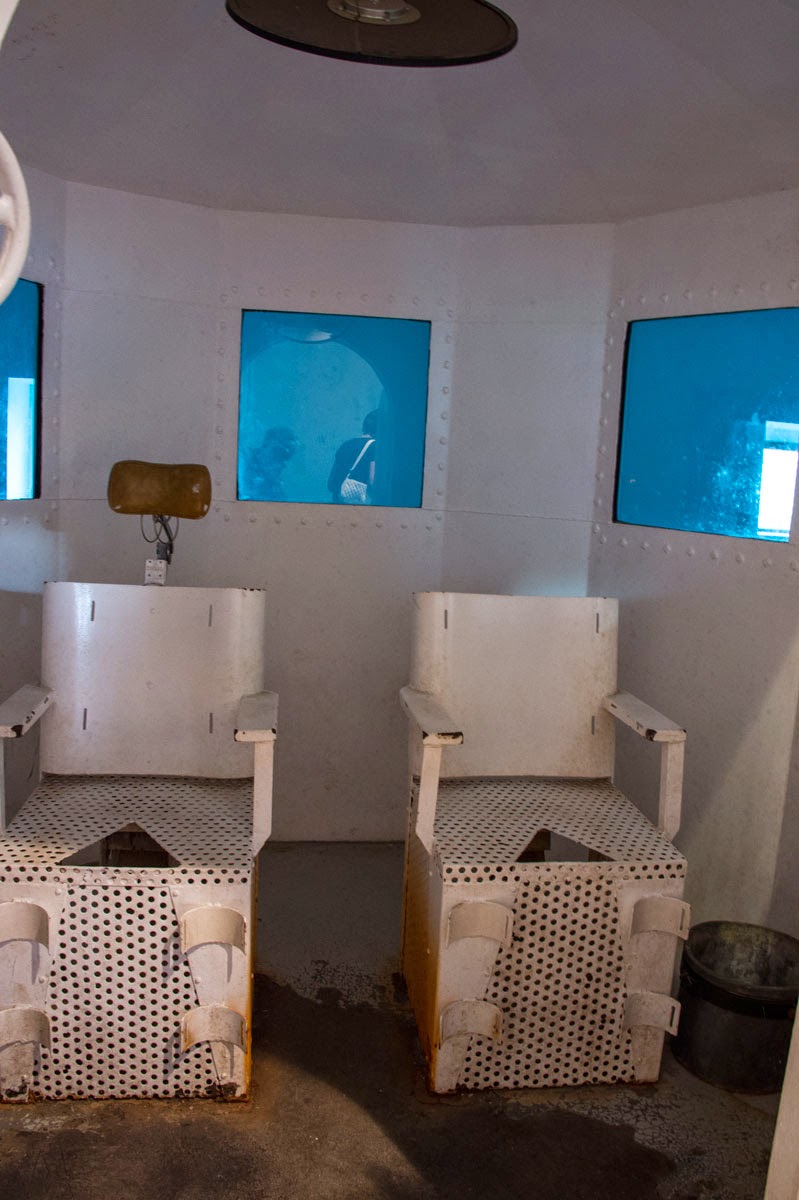 Just outside on the wall is the last chance phone for those waiting for a call from the Governor's Office. 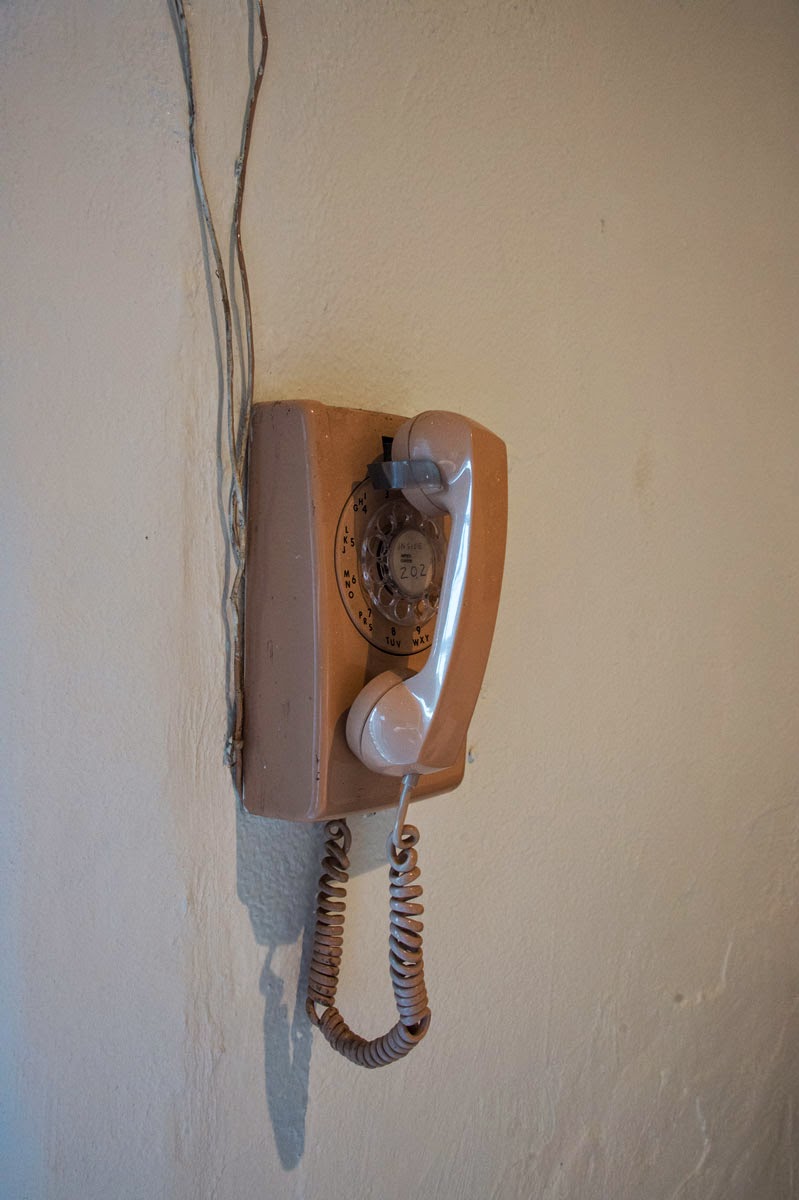 They let Barbara and I go, thank goodness, and we returned to the rigs in time for bed ... for me at least.

Today we headed back West towards Kansas City and stopped in Sedalia at the Katy Trail State Park.  A bike path across most of Missouri was built on an old railroad bed and passes by several railroad stations.  We arrived at the Elks Lodge outside Kansas City where we were greeted like long lost friends!!  They moved their cars and made room for us, bought us drinks and invited us to breakfast for Fathers Day!!  What a GREAT group of people!!!  They are very proud of the fact that Harry Truman was a member of this lodge and his picture hangs in the hallway.  Here's to Harry!!!