Ducks and The Sinking Of The Titanic!!

My biggest apologies to Punxsutawney Phil for calling him a Muskrat!!  My neighbors informed me yesterday that the animal in my pictures is a GROUNDHOG!!!  That's a first for me ... I've never been in the company of a Groundhog!!  No wonder he didn't run for the river!!!

With a break in the rain, our first stop of the day was Ride The Ducks!!  In 1945 these vehicles were invented to transport troops and supplies across water.  Here's Barbara sporting her new $7.00 sweater and Tom with his new leather cap!  Pretty snazzy!!! 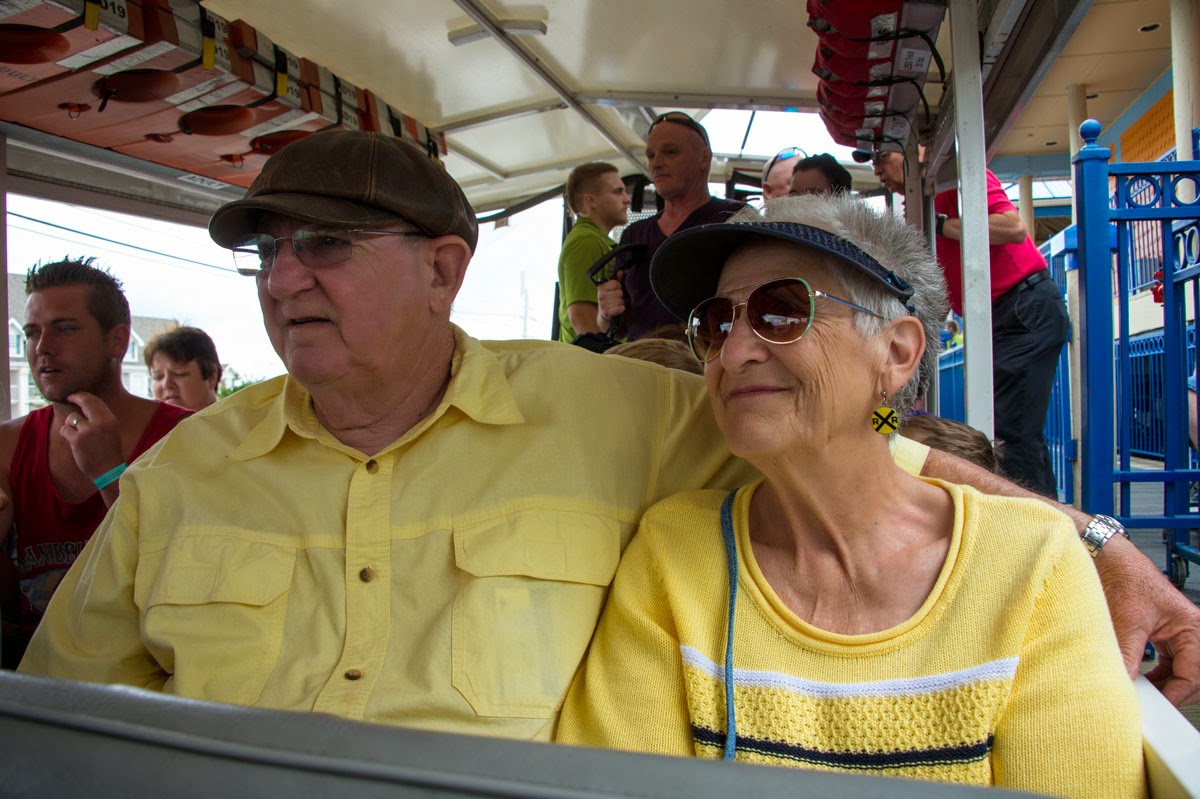 From the "Who Am I" boards around the small museum in the Duck Building, it seems that all the captains of these rigs are Veterans, including our pilot Jed!!  He was entertaining and very funny as he talked nonstop on our 1-1/2 hour trip for around $25.  He also played appropriate music for us along the way ... funny appropriate!! 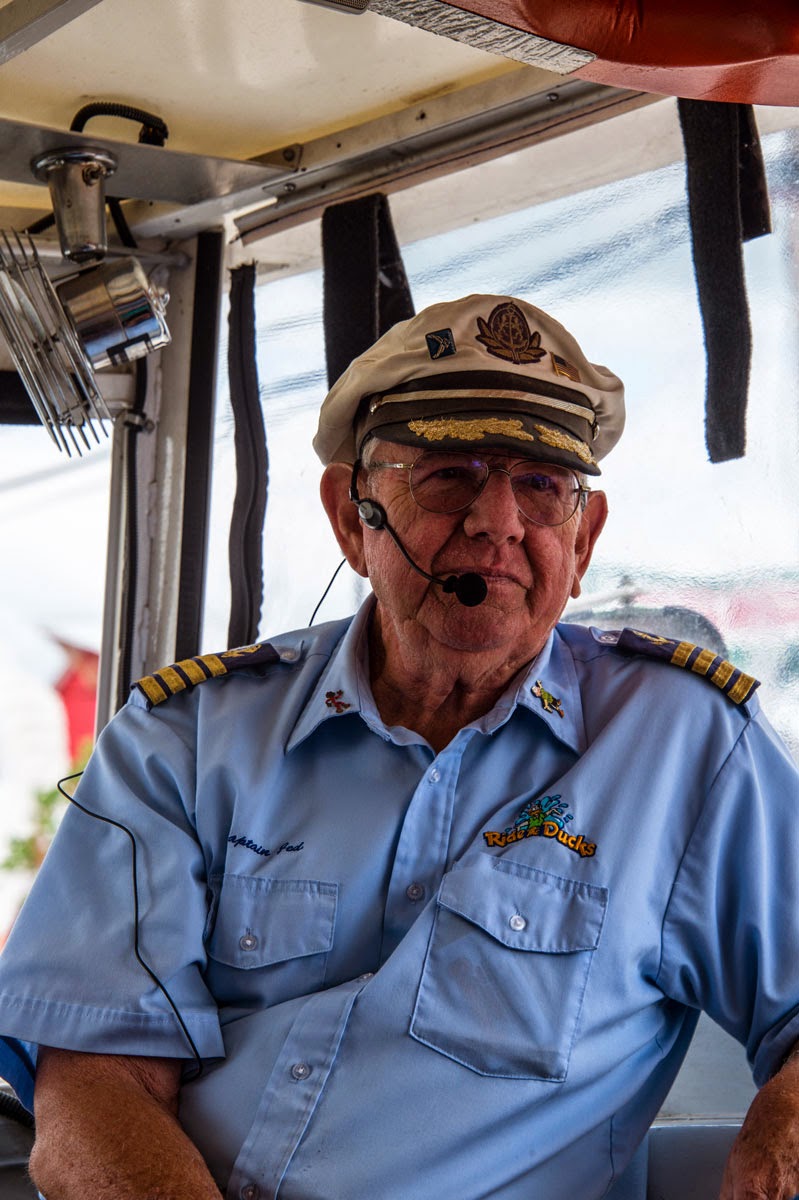 You need water for a duck, so we immediately headed up to the dam where splashdown would occur. If you have little kids or grandchildren, don't let them see the duck bills when you purchase your tickets, so you don't have to listen to squawking the entire trip as they try to out-blow each other.  Captain Jed told the kids to hang on tight when they went to bed, because the Duck Bill Fairy will fly by and they will disappear forever!!  I was wishing the Duck Fairy would make a daytime appearance!! 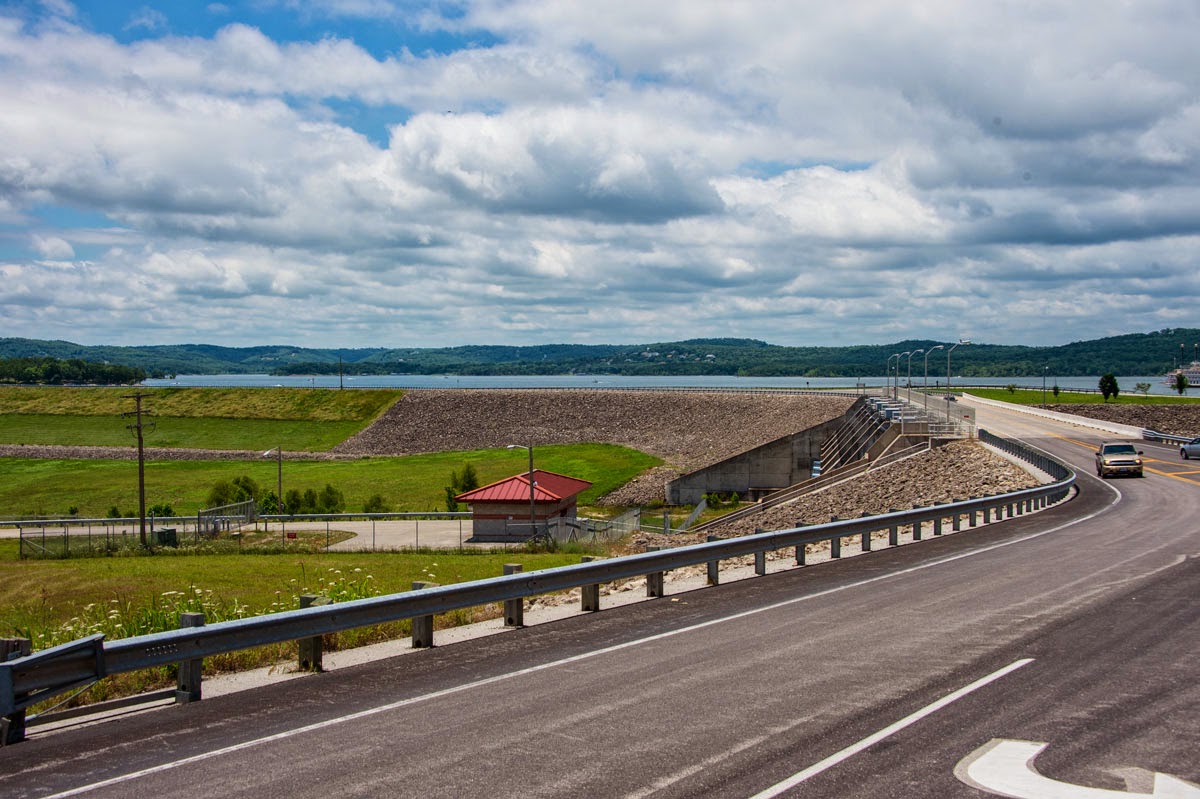 Our first destination was those huge rock cliffs at the top of the mountain.  Unlike any other Duck ride I've seen, this one honors our military from start to finish!!! 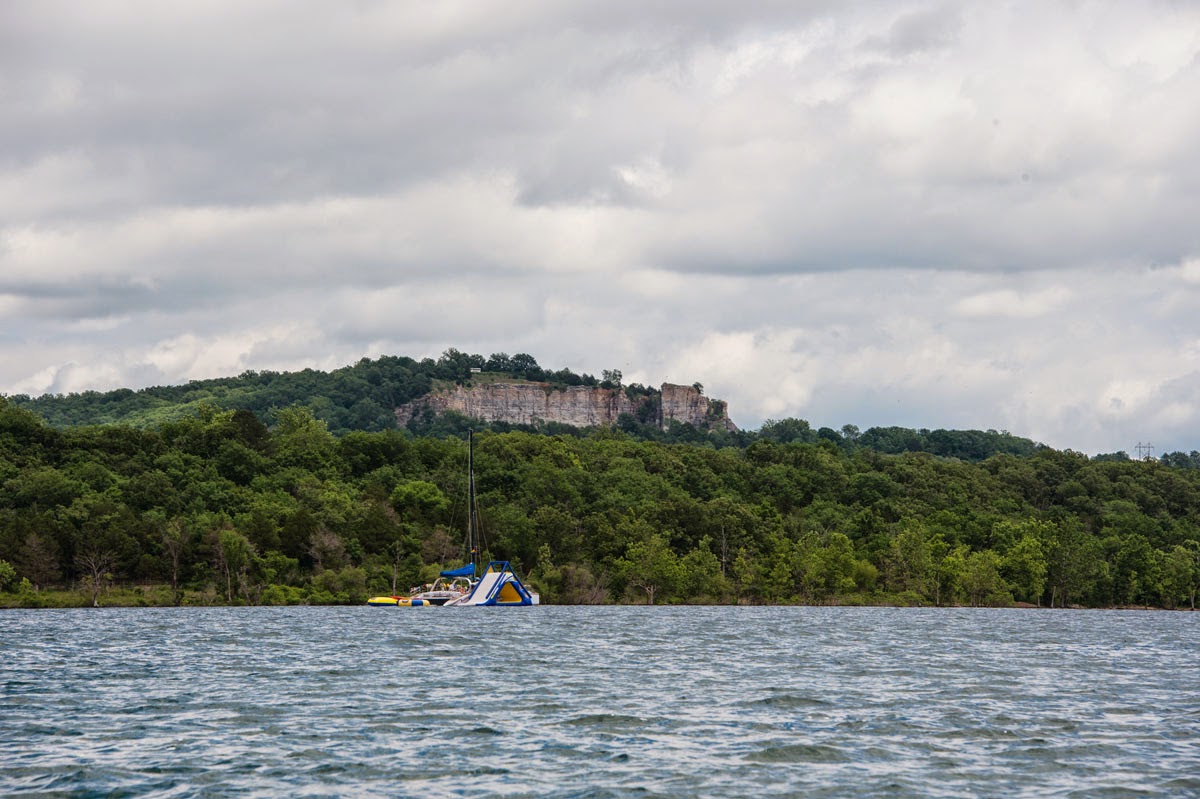 Located almost at the top in this rock quarry on private property, were old military vehicles, including many ducks.  This is one of the originals ... and it even pulls a duck trailer.  I've definitely never seen THAT before!! 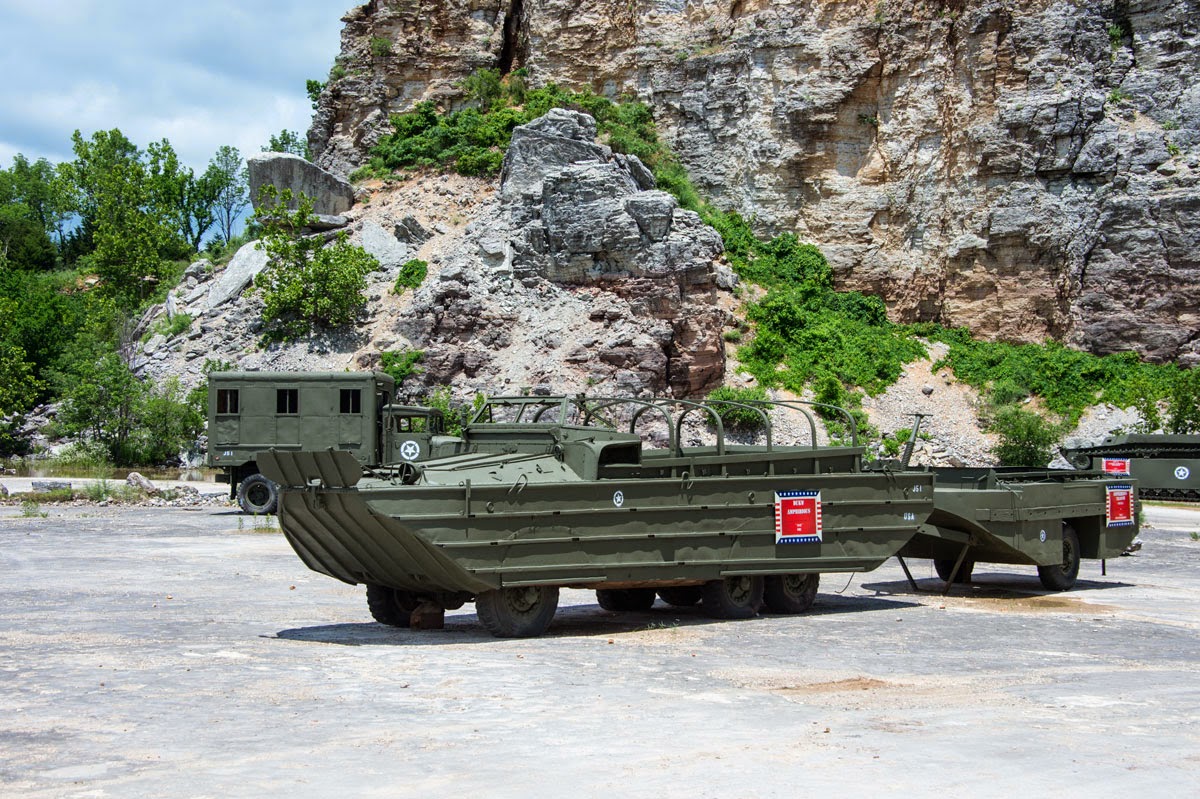 Another original for carrying heavy equipment. 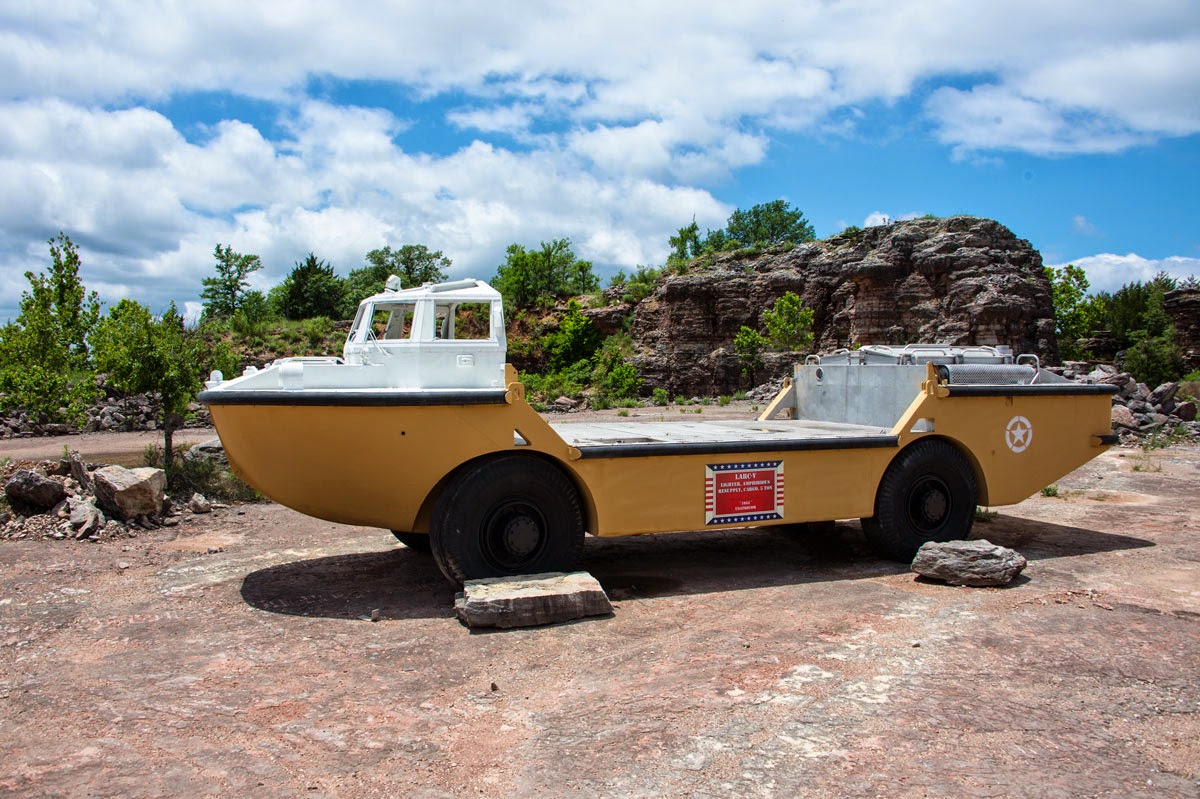 The view from the very top was amazing as we looked over a large section of the lake.  Up here is an American Flag flying proudly along with a medallion from every section of the military.  Pretty impressive!! 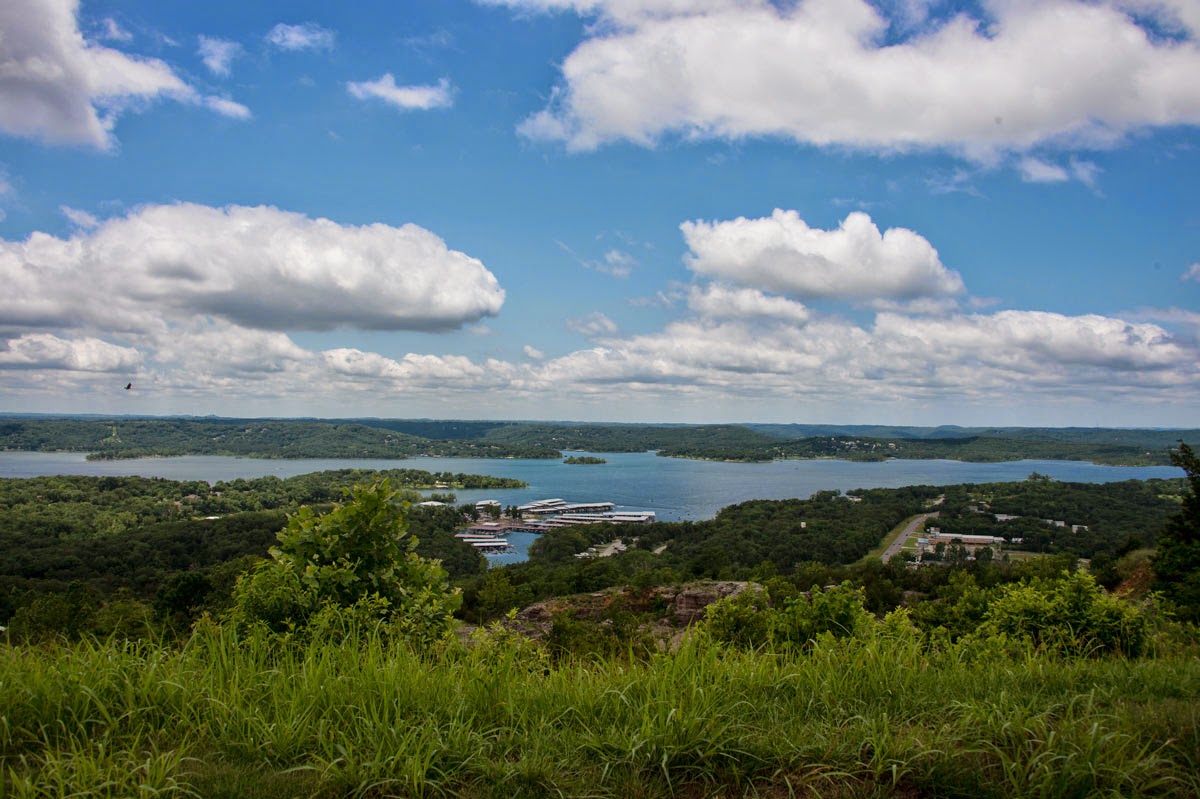 Also flying around are my favorite Turkey Buzzards ... 25 or 30 of them ... gliding on the breezes!! 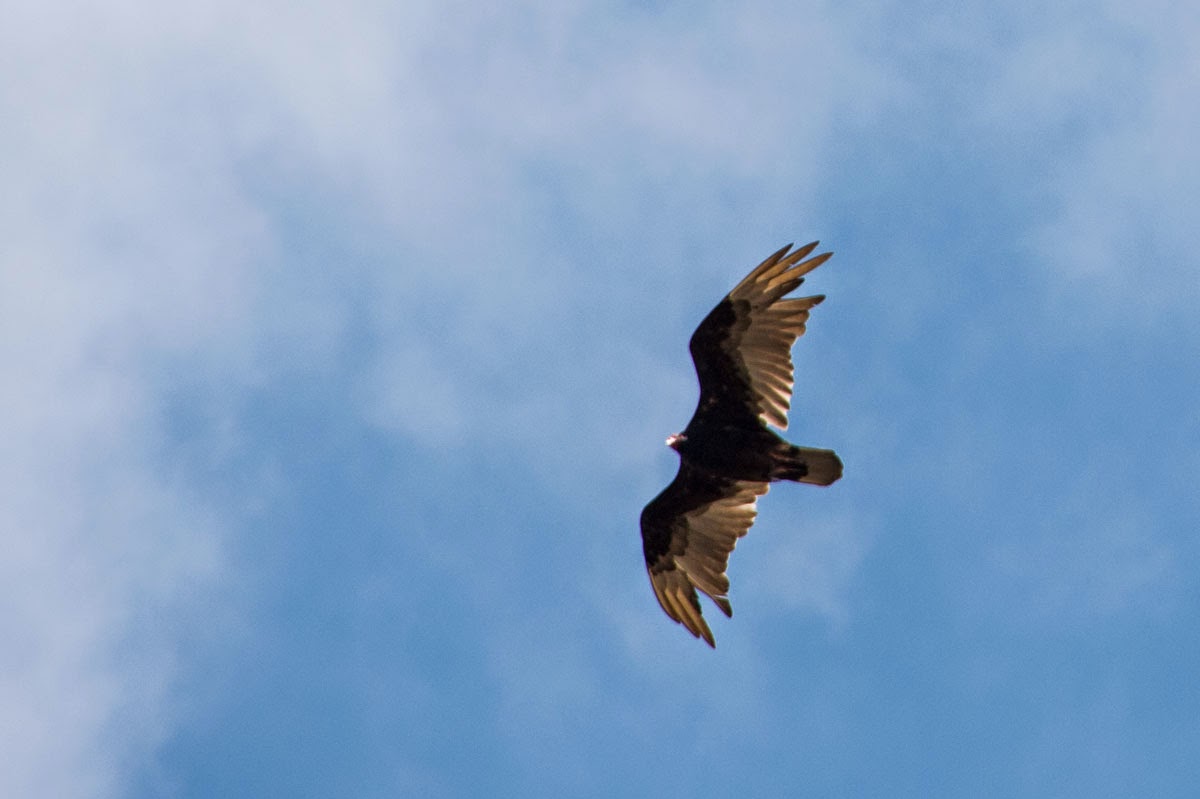 This is the original 1945 duck purchased for the Duck Ride.  This was transformed into .... 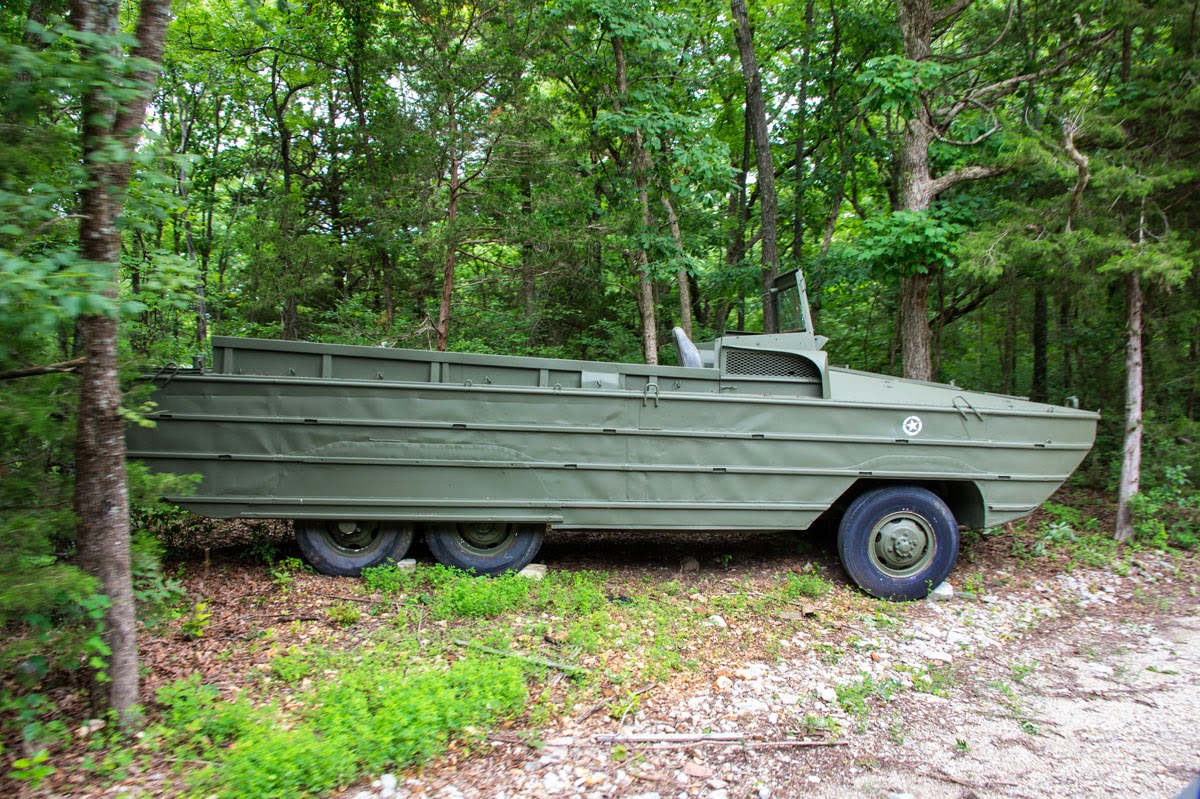 this, as the first Ride The Duck vehicle.  They are a little more sophisticated now, with larger seats and a bigger roof, including a windshield for the Captain so he doesn't get soaked when he enters the water!! 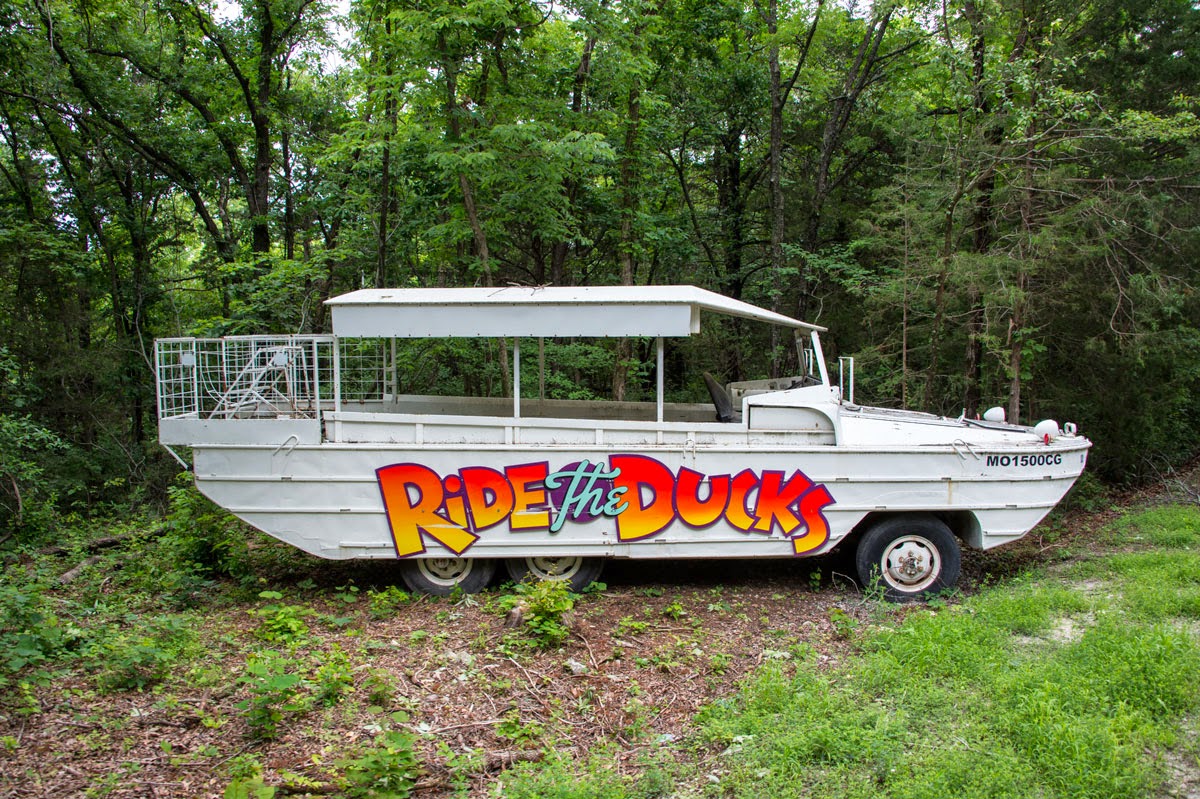 This is the Baird Mountain Weather Station, along with a fork in the tree (a real fork hanging from a branch) and a couple other lame but funny jokes!! 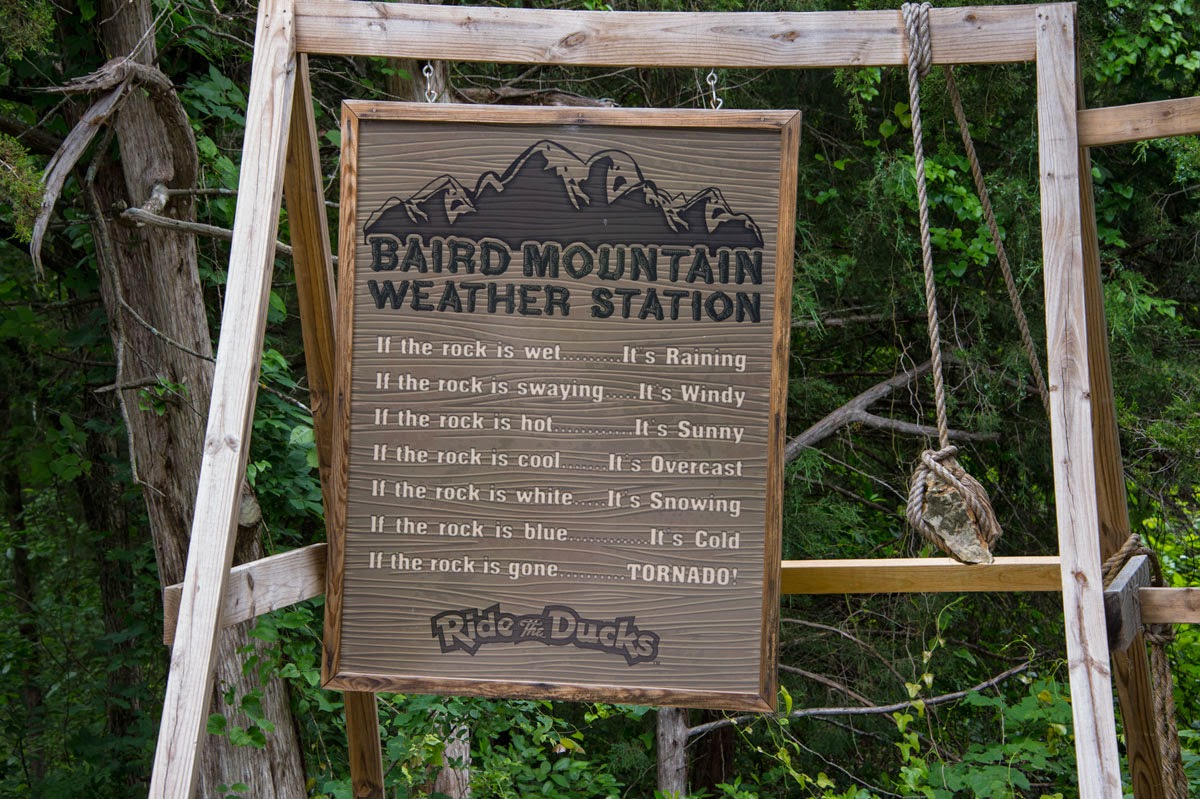 At long last we started down the ramp to the water.  He asked if we wanted it slow or should he hit it!!  Of course everyone said HIT IT!!!  No one really got wet from the entry, except the backlash wave comes over the back end, which is why they call those seats soggy bottoms.

We arrived just as the Branson Belle was docking.  They have a dinner cruise on this beauty, but make reservations way in advance.  As you can imagine, a ride on this paddle wheeler has a waiting list. 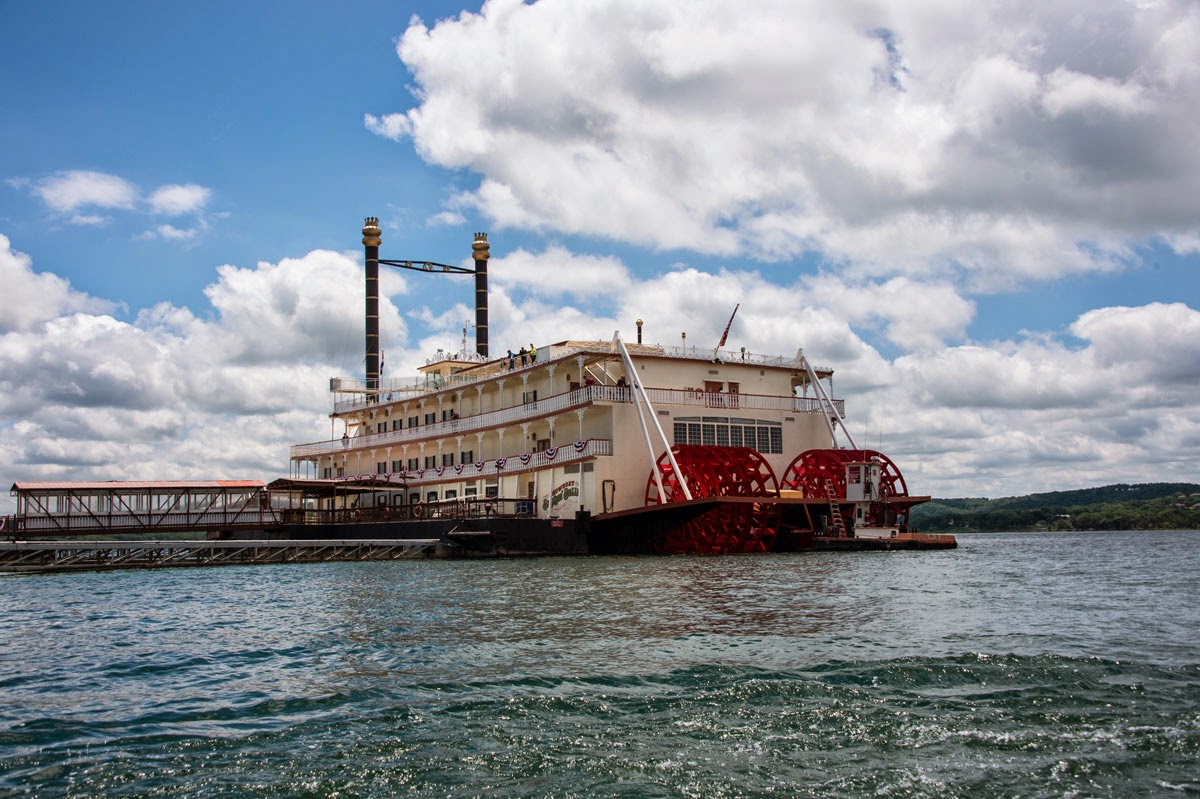 I really thought we would just hit the water and come out again, but instead we cruised around the small island at all of 6 miles an hour while all the kids got to drive the Duck. 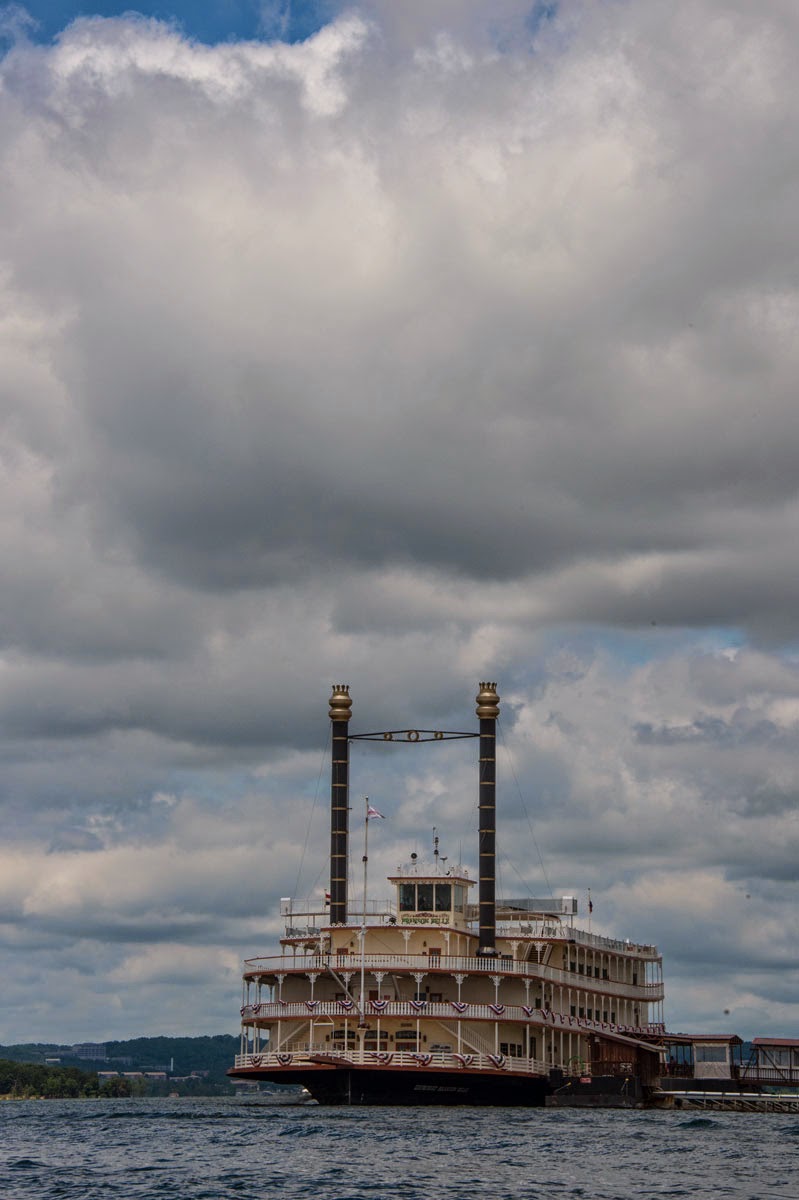 Moored to the island were two Dive Boats ... again not what I expected.  I understand when they built the dam, they flooded the town that resided there.  Instead of demolishing the buildings, they left everything intact.  I'm assuming this is what the divers are here to see.  Honestly, there's not much else in a lake except mud, a few fish and a beer can or two!! 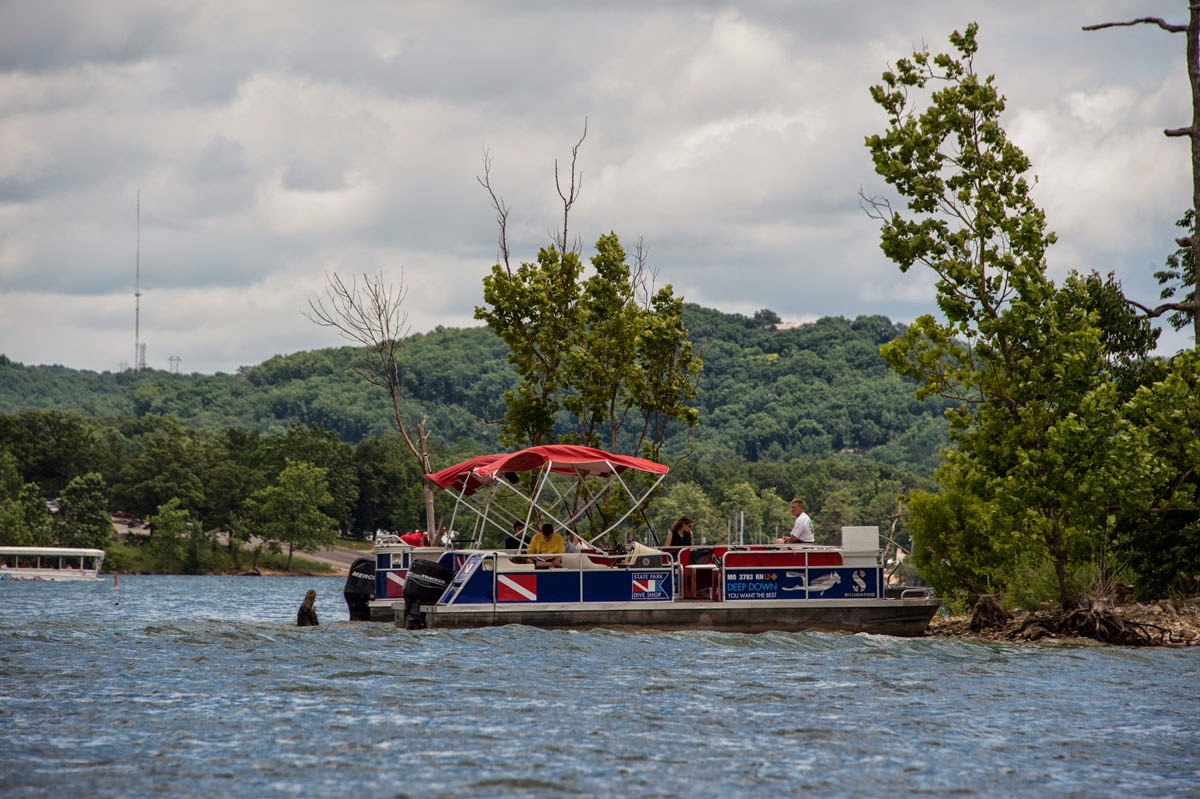 On the way back, we got a mini tour of Branson and passed the Titanic Exhibit, complete with iceberg!!  That's our next stop ... after lunch that is, at the Grand Country Buffet!!  Stop in here, if only for the blackberry cobbler!!!! 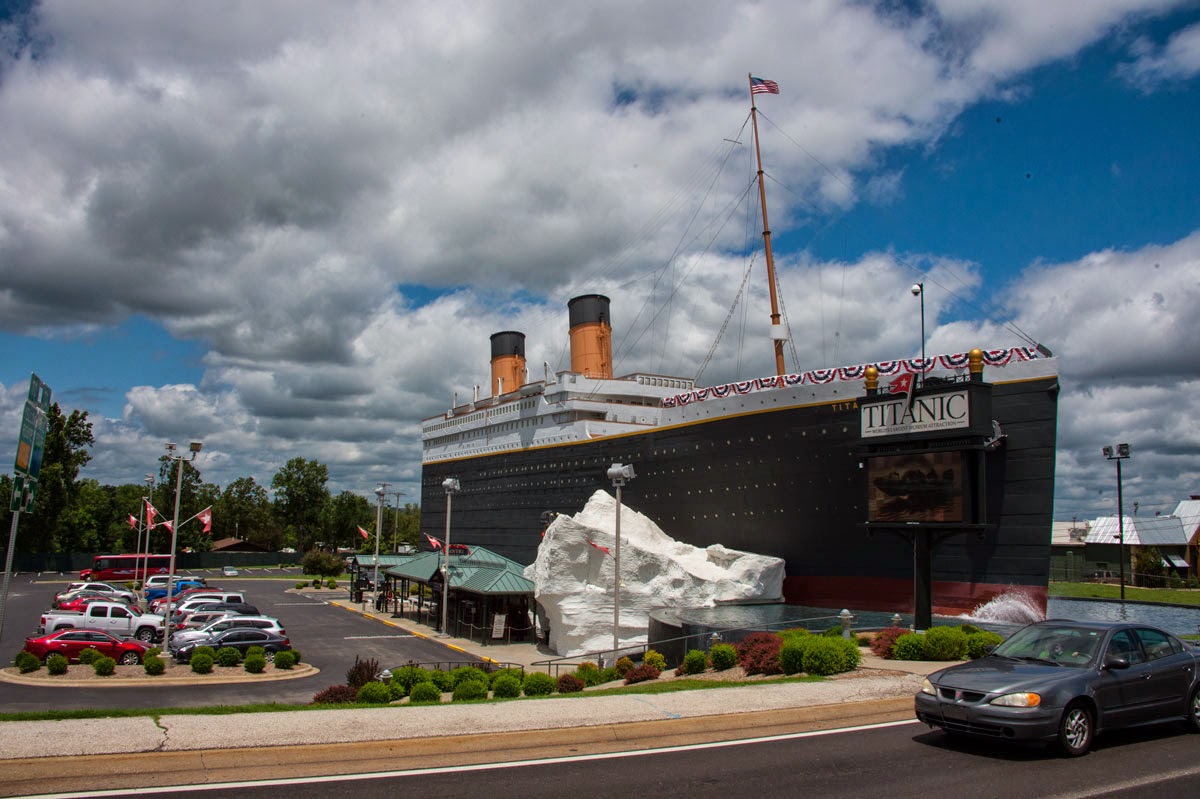 I wish I had tons of pictures of the Titanic to show you, but they very adamantly explain that NO cameras, videos or phones are allowed.  This is a MUST stop however!!  First, you get to feel how cold a real iceberg is at the entrance.  As you walk through what looks like sections of the actual ship, you carry a device that lets you listen to more detail in every room.  When you arrive, they also give you a boarding pass with the name of a passenger.  Along the way, you find part of their story, and at the end, discover whether they survived or not.

Amazingly, at one of the first exhibits of artifacts, I find the extremely rare last name of my Grandparents, about whom we have little to no information.  THAT was a shocker.  As a third class passenger, he did not survive, but I'm definitely going to look up as much of his history as I can find.

There is spectacular stuff here ... including the names and pictures of most of the passengers, replicas of staterooms in first class and bunk beds in third, including many stories of the occupants.  You walk up the grand staircase to the second floor where the new music room is, showcasing the seven member band that continued to play until the ship went down.  Most of the displays have actual artifacts from the ship, many one of a kind items that are fascinating to see, including letters written home from the ship before it sank.  Along the way, British crew give you even more detail, as you make your way into a room made to look like the outer deck at night, with a temperature in the 30's.  No one stayed long in THAT room!!  It was an amazing tribute to the Titanic and it's passengers, including many stories of the survivors, where they lived after the disaster and the year they died.  VERY cool stuff and SO worth the price of admission (which I think was also around $25).

Today we pack up and head for Jefferson City ... after a quick stop at another Victorian Clothing Store!!