EeeeeeeHawwwwww!!!   That's what you'll be saying when you sign up for the dinner show in Branson!!

With another restless night under my belt, I yawned my way through breakfast at the waffle house, while Barbara ate this pie-in-the-sky dessert waffle.  Smothered in blueberries, ice cream and whipped cream, it was the perfect thing to get her morning started!  Barbara's my kind of girl ... dessert for breakfast!! 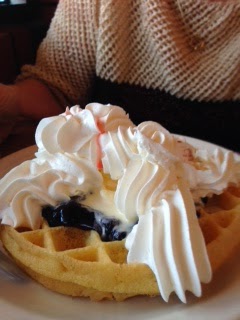 Time for a little shopping before the big show tonight.  We stopped in at various Craft Malls, checking out the merchandise.  I've seen lots of candy in my trips around the world, but I've never encountered gummy ...... wait for it ................ CHICKEN FEET!!!  Only in the Ozarks!!! 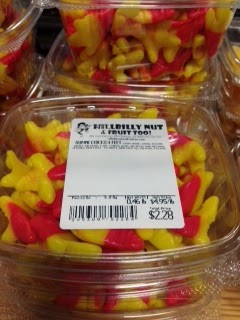 Then there was the chocolate rock candy.  This stuff looks exactly like what's in my back yard gravel pile.  I have to say however, that most of the items here were half the price of California goods.  In fact, they had a purse that both Barbara and I loved, for $29 versus the $50 price tag in Amarillo.  Exact same purse!!! 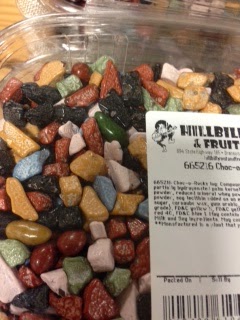 Tom has been searching for a new leather case for his phone, so I'm always willing to help by pointing out Western stores that have leather goods.  What?  You think I had an ulterior motive??  This particular store on the main drag DID have a couple of spectacular jackets on sale ... one that just happened to fit me perfectly!!!  Unfortunately, none of the cases fit Tom's phone, so we'll just have to check out all the rest of the Western stores in Branson!!! 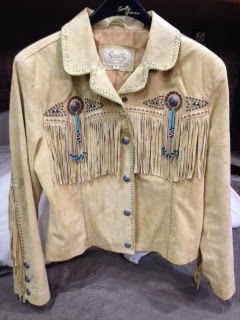 Our main plan for the day was to attend Dolly Parton's Dixie Stampede dinner attraction.  For $55 you can sit in Dolly's box seats (if they are available) OR you can sit in C-1 section, right up front in the first row.  They do three shows a day, so while the previous crowd is clearing out, you get to sit in on the "pre-show" and drink your non-alcoholic strawberry daiquiri from this lovely plastic boot for $4.00.  When we pre-purchased the drink boot, we were told we got free refills.  Not so  ...  MY refill was going to cost another $2.00, so I passed!! 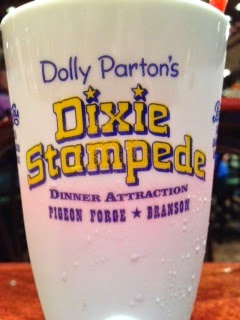 The show was loud, glitzy and entertaining as the North (our side) fought the South (booooooo) for bragging rights.  Me thinks it was a setup, because twice when we won, the announcer cheered the South for their win, as the medal was placed on their side of the arena!!  While the show began, we were treated to the dumping of the food .... Ben was serving it as fast as possible!!  We got the McDonald's special ... chicken nuggets (game hens, smoked to perfection), fries (half a baked potato, also smoked) and smoked pigs feet (actually a chunk of ham) with cheddar cheese biscuits and cream of vegetable soup.  NO SILVERWARE!!  It was eat with your fingers and stamp your feet on the floor (to keep from throwing chicken bits on your neighbor)!!! 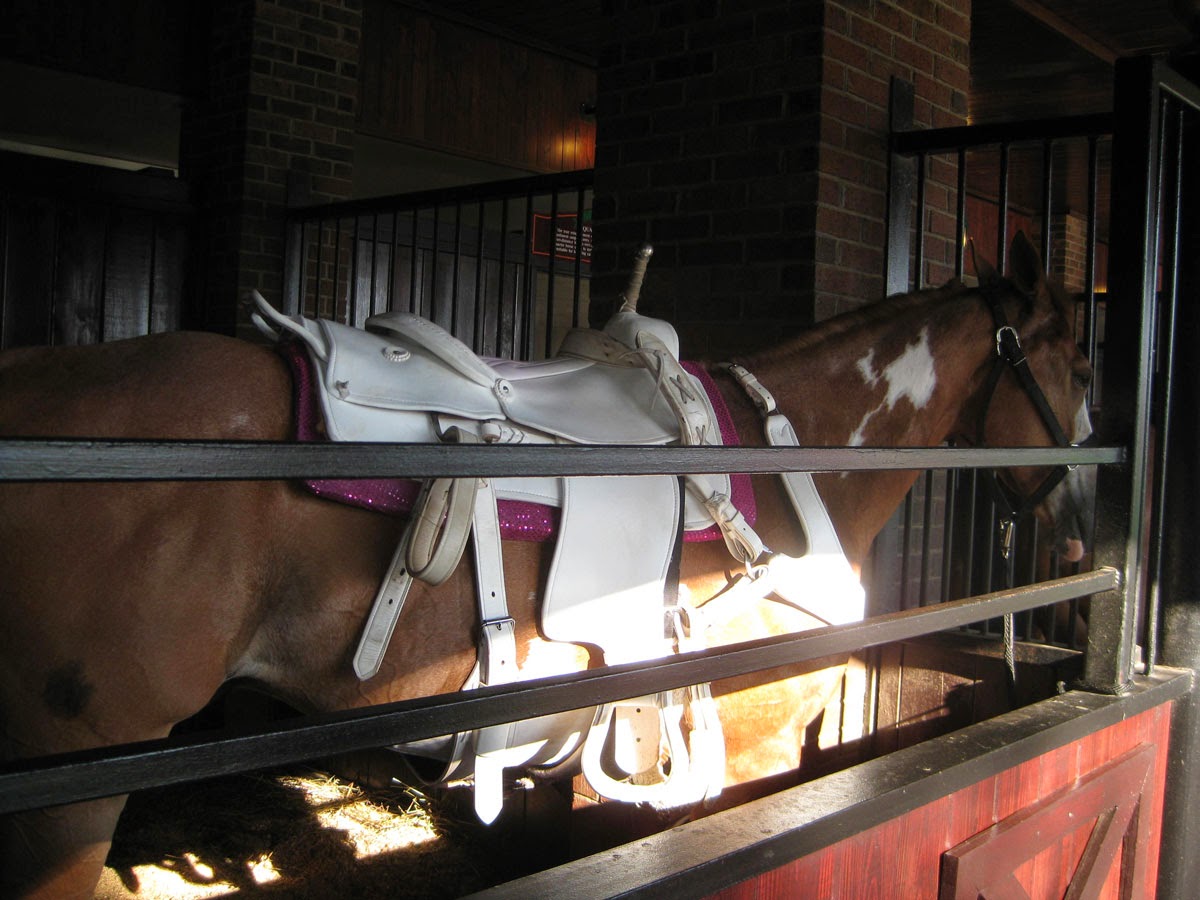 The horse above is saddled with a trick saddle to be used in the show.  When you arrive, the horse stalls are on the outside of the building, so you can meet the REAL stars of the show.  Most were trying desperately to sleep between performances (I know just how they feel).  No video or cameras are allowed, so these bad light pics aren't great by any means.  I do have to say the horses were in excellent shape!!! 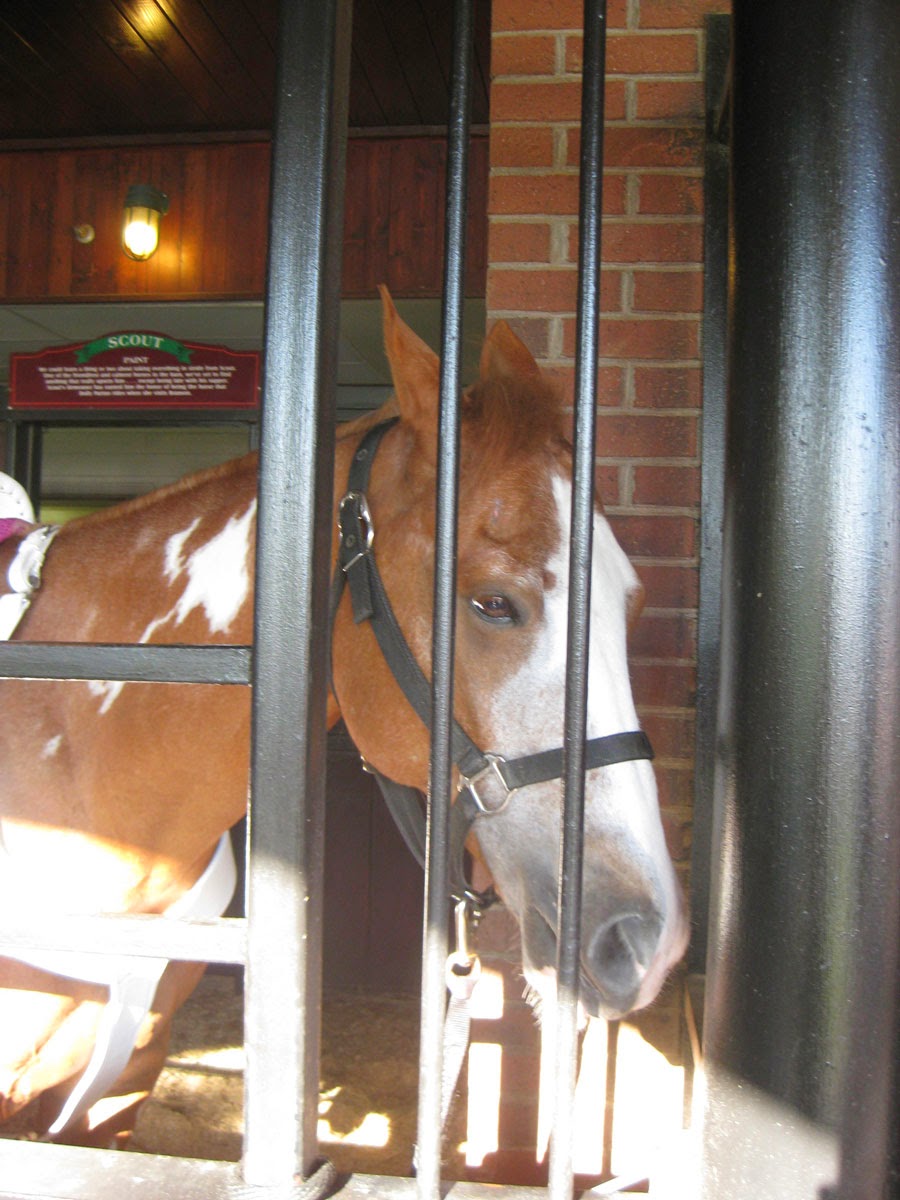 The majority were quarter horses, an Arabian dressage horse (yes, really ... I know, I've never seen one before either) and a Friesian that looked like a dream to ride. 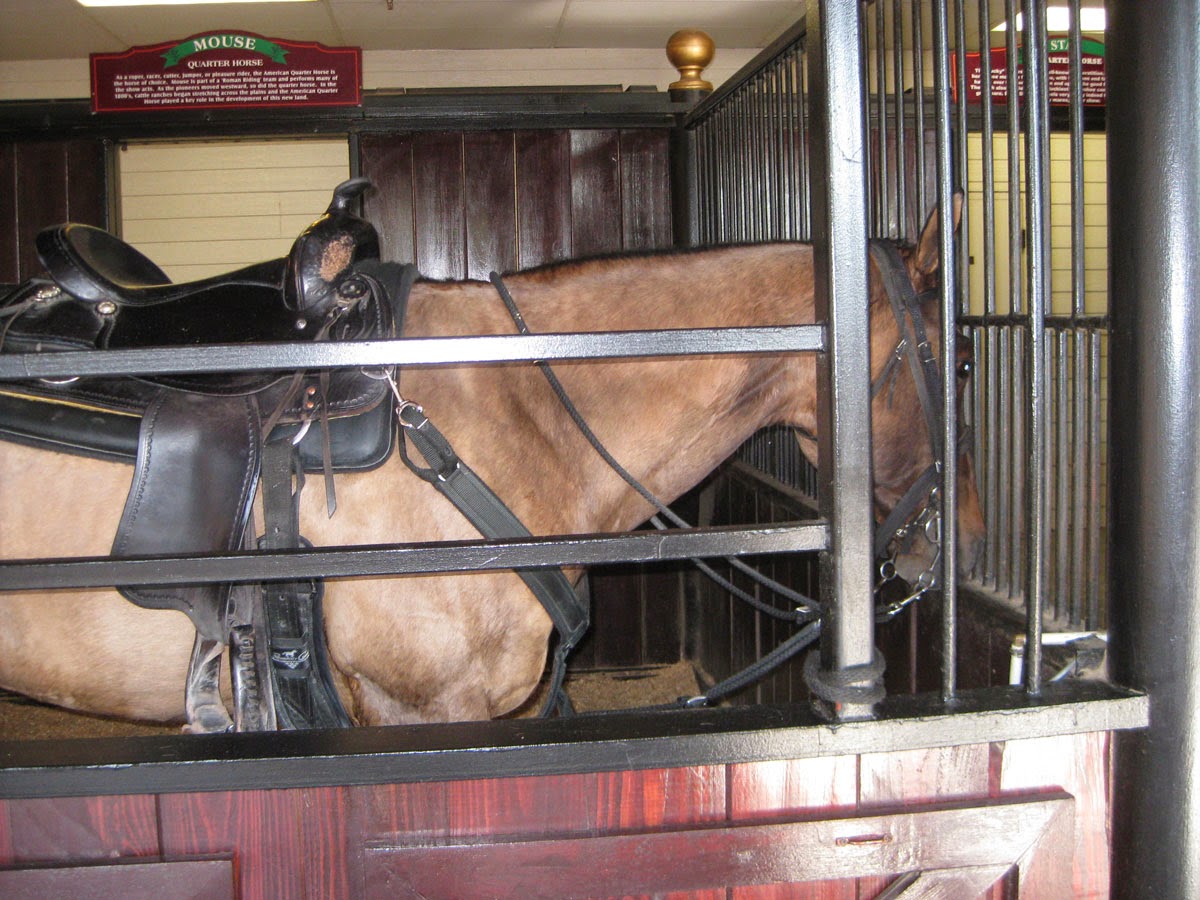 By the end, the North lost to the South (I think it was rigged), but that's okay, we WON the war.  Ben our server was funny and entertaining, the food was great and we got all our aggressions out screaming and yelling EeeeeeHawwwwww for the North!!  They do of course take your picture when you enter the building (we didn't bite) and exit you through the gift shop where Barbara and I passed on the Little Pony pink purse.

I did notice as the riders were in the arena that every single horse was pinning his ears with every ride.  For those that haven't been around horses, that's a bad sign.  They either want to kick the padoodle out of the next horse, the bit is so severe it's hurting their mouth or they are just plain soured on this activity, in which case they should be turned out daily in a large corral so they can just be a horse!!  At the end, as the riders sat close to the edge, I asked one girl what bit they were using, hoping to dissuade my fears of severe bits and sore mouths.  Her answer?  "I don't know, I just ride them"!!!  Hmmmm WRONG answer.  Barbara asked if she bridled the horse.  "Oh yeah, but I have no idea what it is".  Okay, wrong AGAIN!!  So I remark ... is it straight in the middle of their mouth, or curved up high.  "It's curved up pretty high!!!"  Third time's a charm and you just struck out!!  I put a big note in their suggestion box!!!  An old fashioned snaffle bit, easy on the mouth, will do wonders for the horses attitude and keep their mouths from being sore due to heavy handed riders!!!

I slept great last night!  How could I not after a week of being awake!!  More food is on the schedule this morning, as we are going back to Keeter Center for their Sunday (all you can eat) Brunch!!  I'm still full from last night!!  I'll try to get some better pictures of the college campus today.  I don't think I did it justice earlier in the week!!