Don't you just LOVE the fall colors of pumpkins and gourds?  There are lots to choose from at the Pumpkin Patch, and while inexpensive individually, when you add up the fifteen required for my porch, it got a little pricey.  Prince Charming came to my rescue though.  He snuck up behind and scared me, which elicited a discount!!  YAY!! 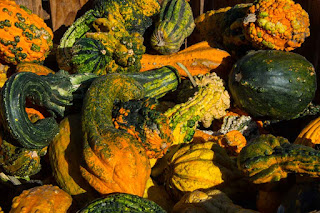 Here's the inside of the old dairy barn, currently loaded to the brim with pumpkins of every size and shape. That makes the picking process a little more difficult.  You have to get just the RIGHT one with just the RIGHT stem.  Most all of these have very long stems, making for ever scarier creations. 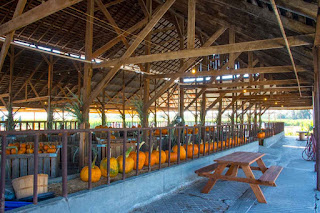 I stood at the end of the property and watched the kids play on the bounce pillow.  I've never heard so much laughing and giggling in one place before.  They were having a BLAST!!  We all cringed when another 300 pound father got on and began to bounce, but it held up like a pro and he giggled like a little kid!! 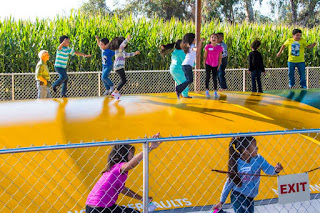 Back home with my chosen pumpkins, I spent an hour on the internet looking for the free pattern I had carved in the past.  It was not to be found.  In fact, all of what I consider the "good" patterns all had big price tags.  Guess I'll just have to create my own.

I really didn't want to break into the center where mayhem and rot begin, but in the end, the only way to see the pattern is to put a light inside.  I'd show the hole in back, but it's terribly irregular.  That line on the pumpkin carving page about not using a knife, but a small saw, turned out to be correct.

I scooped out the guts ... what a mess THAT turned out to be.  There's just no easy way to do it.  I had seeds and 'yuck' all over the counter and floor. 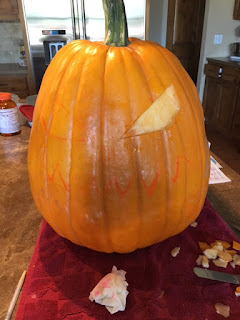 Once my knife got going, it cut through the pumpkin like butter, going WAY over the pattern in several places.  RATS!!  Looks kind of like the Grinch, right? 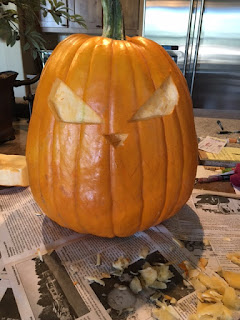 More and more carving, lots of slips and oops, resulted in pumpkin pieces on the floor that Miss Jessie scarfed up before I could stop her.  Weird, right?  What dog eats raw pumpkin??   I'm hoping she has no ill effects.

Finally done, I looked for a light to put inside.  All I could find was one of those battery operated candles, not putting out much light.  In fact, not putting out ANY light.  I put the pumpkin down in a dark closet and all I could see was the nose.  I either need a MUCH brighter light, or I have to carve even deeper. 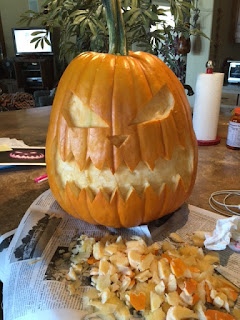 My tall man with the bald head has scared me three times now.  Especially when I walk around in the morning dark.  I don't feel so bad however ... I moved him near the front door, and when the Contractor stopped by for an update, it scared HIM when I opened the door.  Hahahaha ... we had a good laugh!! 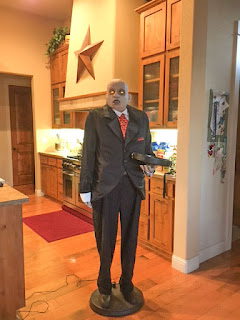