When I saw the advertisement for STAG Day at the Park in the Elks Lodge bulletin, I immediately assumed it meant men only.  I guess that was showing my age, back to the old days of women not counting for much except cooking and cleaning.

So when the ER, we'll call him Prez as in President, asked me if I could help out in the kitchen, I was a little surprised, to say the least.  WHAT???  It's a stag party and I'm not invited, but you need me in the kitchen? 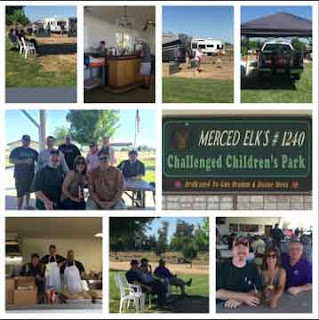 Turns out I had it all wrong, after all it's 2016, not 1950.  A STAG is an Elk the Prez said ... an elk is a member.  This party/picnic/steak lunch was for members only.  Once that was explained to me, I felt a little better about being kitchen help.  I did feel bad for all the wives out there who were not only NOT invited, but NOT allowed to attend.  It's members only!!

That meant there were dozens of men, not that I mind THAT at all, and only three women, four if you count the bartender.  Hey, I kind of like this STAG thing!!  Never once did I get up for a soda.  I probably could have even talked someone into taking my place in the kitchen!! 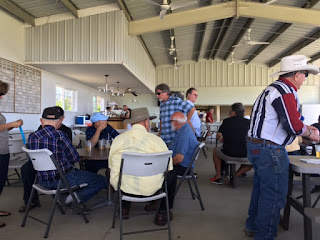 In case you didn't know, just a stone's throw from this patio/kitchen building is the RV park, with lots of spaces, a dump station and plenty of electricity.  The best part is the peace and quiet since it's located about three miles from the freeway.  Unfortunately, it's Elks only, but at least wives can stay too.

When it came time to get the steaks on the grill, I headed to the kitchen.  Over 100 HUGE New York strip steaks were cooked over charcoal as I mixed up a green salad and made sure the rolls in the oven didn't burn.  We had the usual people come up and try to get TWO dinners, or an extra one to take home to their wife and kids.  Once they heard the definition of STAG, they wandered off for another free beer.

As with all organizations, the leftover steaks magically disappeared.  I suppose it's the price paid for all the work to organize and put on a shindig like this.  I ate my roll while serving, passed on the salad and took my steak and beans to go.  It was cooked perfectly!! 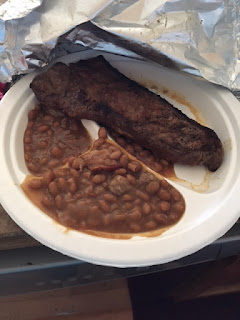 Then came the raffle.  There's always a raffle, right??  The pretty girl in the skimpy outfit running around with a big roll of tickets trying to extract money from your wallet?  There was no skimpy outfit, in fact no girl at all, but a good looking guy!  Being the good Elk that I am, I donated $20.  There was lots to win ... an easy-up, five larger than life bottles of booze, even a barbecue!

Believe it or not, I actually won this magnificent QUAD CHAIR!  I have no idea what the quad part is all about, but I was feeling pretty good about my acquisition until I got it home and saw the price tag of $14.99.  RATS .... I lost again!! 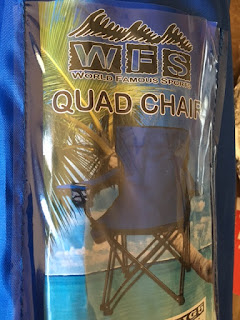 About that time they brought out four huge cakes for dessert.  You know me, I jumped up immediately, only to find the men cutting humongous slices.  WAIT!!  There won't be enough for everyone!!  Like any good woman in the kitchen, I grabbed the knife from his hand and proceeded to cut each cake into normal sized pieces, the perk being that I got to eat all the frosting stuck to the knife.

All in all it was a nice day, in spite of the grease splattered on my brand new shirt as I served the too-large steaks.  I met some nice people, including one gentlemen I actually went to school with.  Not that I ever saw him.  Our school was broken down into two campuses.  Freshmen and sophomores at one site, juniors and seniors at another, so our paths never crossed.