Do You Wanna Play Some Baseball???

Me either!  I tried a few years back to join one of those mixed leagues that play round town.  After 15 minutes of trying to catch ground balls, I put my glove away in my cedar chest where it will probably stay for the rest of it's natural life ... or at least MY life.

You may think baseball is the most boring thing in the world, and believe me, sometimes it is.  That rarely happens however if you attend a game in person at AT&T Park in San Francisco.  It's a two hour drive to Dublin/Pleasanton, then always an interesting ride on the BART train into the city.  People watching is a sport there!!  From the train station, you can either take a Muni train the mile to the park, or walk as we always do.

It never ceases to amaze me how the city can change.  Old buildings that have been rehabbed suddenly stand out, like this one ... the Audiffred Building, pictured in the middle.  Originally named the Bulkhead and built in 1889, it was saved during the earthquake and fire by the bartender who guaranteed every fireman two quarts of whiskey and a case of wine if they would save it from the flames.  So that's what they did and it still stands today! 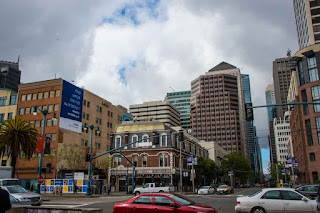 Where else but in San Francisco are there sidewalk cafes and small food stands that sell Rabbit Sandwiches??  It's a unique town to say the least, and it makes for some awesome photography if you take the time. 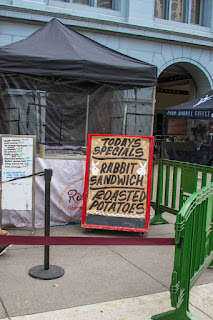 Unfortunately, we didn't have any time, as we walked the mile to the park along the waterfront on Embarcadero Street.  There's some rather weird sculptures along the way, such as this bow shooting an arrow straight into the heart of San Francisco. 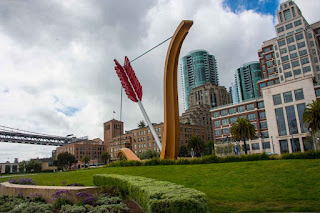 The beautiful Bay Bridge allows vehicles access, this section being from the city to Treasure Island.  It is completely lit up at night.  One of these days I'll take a body guard with me and do some night photography.  I've spent many days alone here with no worries at all, but carrying around a big camera at night is just asking for trouble!! 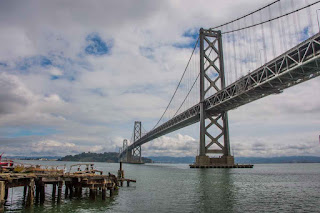 Finally at the park, after passing through all their new security and metal scanners, I tried out my latest fisheye lens.  It sure gives you a different perspective.  My season ticket seats are up by third base on the Giants side of the park (to the right in this picture), giving you a great view of all the plays. 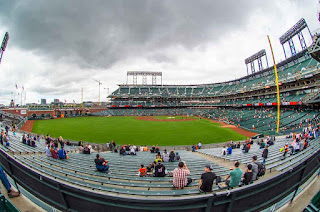 It was a perfect day with clouds overhead blocking out the hot sun.  Too bad the Giants lost ... this is like four in a row, or is it six?  No matter, I've never had a bad day at the park, even when they lose.  The food and atmosphere is beyond compare, as are the cute ballplayers.  Don't you wish you were this flexible?? 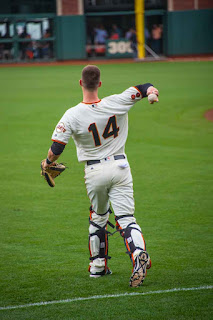 Their mascot Lou Seal has been around for ages.  His antics are hilarious as he dances in the face of Queto the pitcher who's warming up.  He's even been known to put on a dive suit and swim around in the bay. 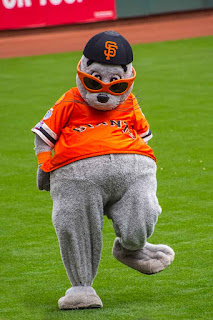 I have many more images, but they will have to wait until tomorrow.  First thing this morning I'm required to be at the Elks lodge to help cook pasta sauce for the Relay For Life Dinner we provide, as well as hit the grocery stores for lunch, dinner and breakfast supplies.  For the next two days I'll help cook and serve about a thousand meals, including pancakes on a barbecue grill.  That should be interesting to watch!!!