Don't you just love it when your days go well??  Yesterday was one of those days for me.  That doesn't always happen, especially when the day involves cooking!!  First up, I completed this quilt and I LOVE it.  I'm such a lover of bright colors, I'm surprised this is one of my all time favorites. 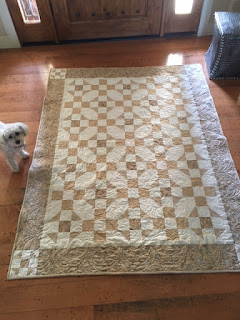 The quilting came out nicely too.  There's a border pattern around the outside with matching stitching on the inside.  Since she's just getting into borders, half of this quilt job was free!  I'd love THAT any day!! 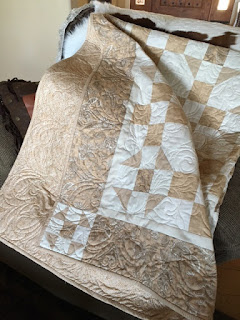 A cooking success in the same day?  YUP!!  Hard to imagine for me!!  This overnight french toast recipe came out so well I had TWO servings!!  It was light and fluffy with a brown sugar crust on top and cream cheese filling.  I'm going to give it one more try just to be sure it comes out good twice in a row, before serving this at the Indio Rally.  Smothered in syrup, it will be even better.  Even though I made a list, I forgot to buy the syrup!! 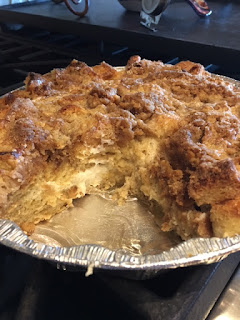 While enjoying my french toast in the morning, Jonathan decided it was time for a bath despite the cold weather.  He's pretty hilarious to watch.  Getting ready, he fluffs his feathers and talks up a storm. 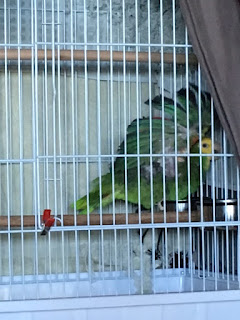 Of course the only water is his water bowl ... nice and dirty from seeds and pieces of cracker.  Dipping his head in the bowl, he comes up for air, spreads his wings and shakes his head.  Water goes everywhere!! 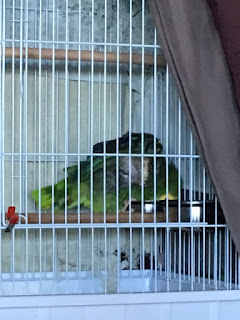 He turns around several times to be sure he gets every little spot damp, including the wall.  He must have been pretty dirty because this went on for about 30 minutes ... a record bath for Jon!! 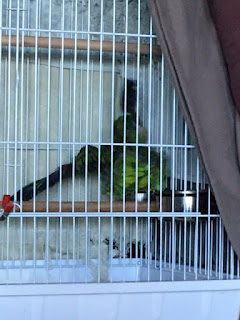 Okay, I'm done now!!  Shortly after, he's shivering, so I turn up the heat.  I've tried blowdrying, but he isn't especially fond of that. 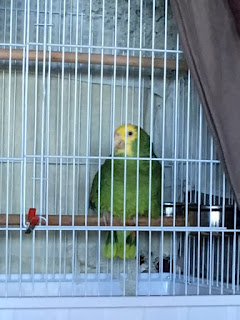 With two successes under my belt, I was ready for the Magic Kingdom of Bingo.  A third success for me!  No grumpy people and I balanced at the end of the night, but not so much for the Pull Tab side.  Apparently $400 disappeared.  It's sad to think that volunteers are pilfering the coffers, but at this point, there is no other explanation.  More controls need to be put in place, which means I need to put on my accounting hat and come up with a solution.  Of course that kept me awake until midnight!!

Early this morning, I'm off to make school lunches for 1300 kids.  YIKES!!  That's a lot of bologna!! Actually, we feed them hot dogs.  Hmmmm, I guess that IS bologna, more or less.  Anyway, Ag Safety Day is coming up tomorrow, and every single third grader in the County will attend safety training with the Elks Lodge supplying lunch.

I love volunteering, but I sure wish they would keep in mine that I'm retired and really don't like to leave the house before 10:00 am.  I'll be out of here within the hour ... better get myself in gear!!