The baseball game didn't end well for the Giants.  Even if you DO eat snakes for lunch, there's a lot of other guys on the bench that can make mistakes ... and make mistakes they did. 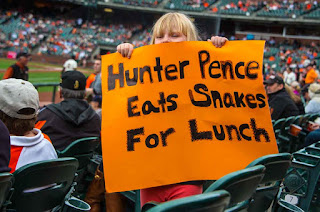 It's still fun for me though!  I like to people watch, like the young couple who came down acting like those front row seats were theirs.  When the REAL occupants showed up, they had to move.  An hour later when the seats were again empty, probably due to a beer run, they came back with tickets in hand.  Unfortunately for them, so did the REAL tickets holders ... and so the fakes were politely escorted out of the park. 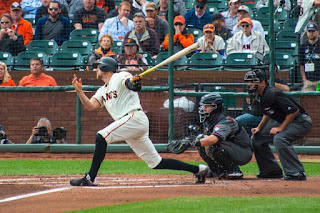 While I really DO watch the game, my favorite activity is trying to catch guys sliding and hitting the ball.  I didn't take my longest lens ... it weights over ten pounds, straining the seams of my backpack and my BACK!!   Now home, my shoulders think there must have been a small child sitting on them the entire day. 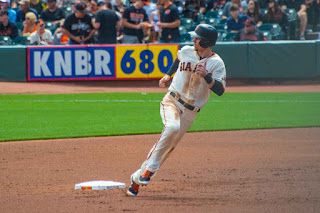 Finally ... a couple of sliding images.  Due to some broken legs and ankles last year, the rules have been changed when it comes to sliding into bases.  The Giants player was safe ........ 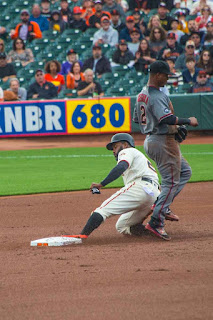 The Diamondbacks player was out!!!  Very close though ... you can see the ball at the right of the picture!! 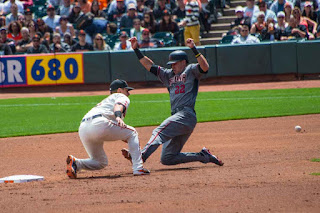 Sadly, the Giants lost 6-2.  They didn't play at all like the Champions this team has had in the past.  Sometimes I wonder how they did this at all.  Every year the players change and only a few playing now were on the team when the trophies were won. 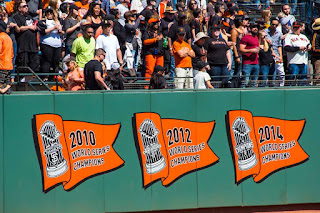 The sun came out about 2:00 and we roasted to well done before leaving the park and walking back to BART.  You can imagine the crowds at 4:30 on a week day, all trying to get on the train and go home.  Squished into a car, shoulder to shoulder, it was a slow trip back to San Leandro where we parked the car.  The good news is that I must appear very young for my age.  Not one single guy offered me a seat ... I stood the entire ride.  Chivalry is dead!!

To add insult to injury, I had to be up early headed to the Elks Lodge to cook that pasta sauce!  It's a good thing someone brought donuts for that early morning sugar rush and you'll be happy to know I didn't burn down the kitchen!!

In less than an hour I'm off to help gather up all the supplies and feed twelve hundred people!!  Maybe there will be donuts!!!