It isn't often the Pillsbury Doughboy comes to town.  Funny how he magically appeared in my house.  I have to say if you're going to craw through the depths of Hades underneath your house in a space less than three feet tall, he's a welcome character.

I have to give it up to whoever invented these suits.  Available at your local Lowes or Home Depot for a measly $10, they make the best sauna EVER. 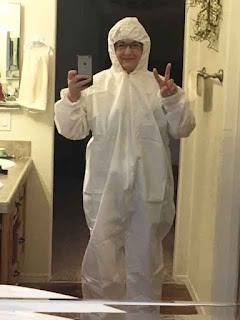 I had great intentions.  Just crawl through the hole, slide underneath this pipe and raise the dryer vent up.  What could be so hard about that?  After all, I did slide the rat trap off to the side so the extra large pieces of white fabric wouldn't get caught in it, scaring me to death when it snapped shut.

The other end is about twenty feet away.  I actually did get it raised and tied in place around that leveling jack.  Try as I might however, my claustrophobia rose it's ugly head and wouldn't let me get a foot further.

By that time, the sweat started to run.  I think I might have gotten further had it been something like minus 30 degrees outside.  Surprisingly I didn't see any critters, only one weird spider web.  I did NOT investigate.   Discretion was the better part of valor as I crawled on my back towards the light.

I do want to thank you all for the pipe ideas.  I will definitely get some 4" pipe to install in place of the stretchy stuff.  I just hope I can screw up enough courage to install it!  After fifteen minutes of using my clean-up-stick to clean out all the fluff from the hose that I could reach, I called it a day.

I tried to neatly fold up the Pillsbury suit for the next adventure, but ended up stuffing it in a plastic bag.  It was worse than folding a fitted sheet.  So much for being a handy-woman! 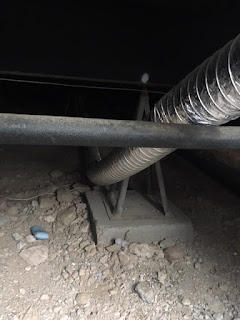 It really was a nice day, although I'm still wearing short shorts and a tank top.  Arizona is just not willing to cool off one tiny bit. 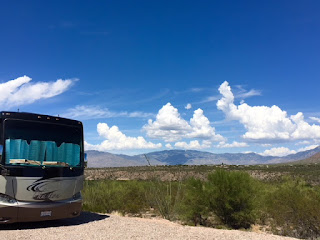 Occasional afternoon sprinkles have brought about some desert beauties however.  This one in my driveway should be transplanted to my back yard.  I'm not sure my gloves are thick enough for this one.  Isn't it a beauty? 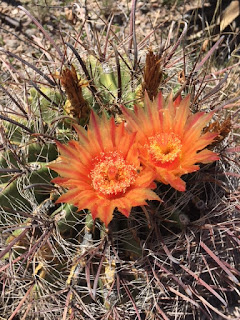 Here's an interesting specimen I discovered upon entering the house with the Pillsbury costume.  What in the world?  I truly couldn't tell which end was the front and which was the back.  He hung around all day before disappearing at night.  Please don't tell me he's poisonous.  I have plenty of those already!! 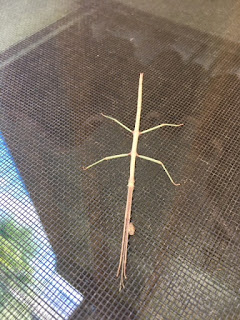 Next up ... try to repair that water damage I found in the bathroom.  Hard to believe that's what it is when it's been so hot around here.  I think it's very old damage that is just now flaking off into the bathtub.  At least it's an easy cleanup when it's in the tub and not on the floor.  Kind of like scorpions.