Well my friends, since my larger-than-life snake experience, I've learned a few things and I feel really bad.  I posted this picture on a Mojave Desert website that I frequent often, asking what kind of snake it was since it had a very long slender tail and no rattles.  Sure looks like a rattler to me!!

It was identified by long time snake lovers as a Sonoran Lyre snake.  The distinctive white arrow-almost-a-triangle on his head is a dead giveaway.  Even though it's a viper, this is a "good" snake, they assured me.  Their venom is not strong enough to kill a human OR a pet, not that I want to test that theory.  More like a bad wasp sting.  They are also fairly rare.  Some of those people have been snake hunters for years and have never seen one.  Now I feel REALLY bad. 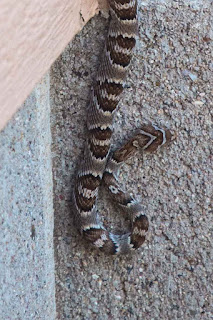 It was such a shock to find it in my back yard, I panicked.  The NEXT time, which I hope never EVER happens, I'll call the Fire Department and have it relocated.  So far I've checked 89 times (I kid you not) and no more snakes have appeared.

In other news .. not nearly as exciting, this is the water damage above my bathroom window.  The paint and texture was bubbling up and flaking off badly.  Luckily, there didn't appear to be any damage to the sheetrock.  There was a tad bit of mold in one place, so I scraped it all clean and wiped it down with bleach. 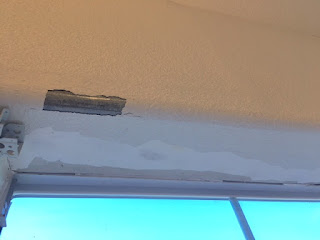 Did you know they make texture in a can?  I thought I would have to bring my arts and craft skills to life by fake-painting texture, but here it is in a spray can.  Too cool and very easy to use. 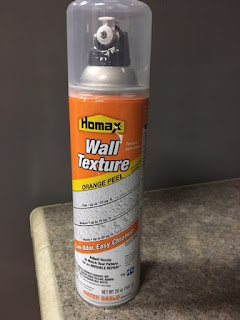 I taped everything off and sprayed away.  Once dry, I had to go over it again because it didn't cover the metal strip very well.  I doubt anyone will get up close and personal to the window, so it won't be noticeable.  My $18 quart of paint should fix it up.  Good grief, when did paint get so high priced???  Another job done. 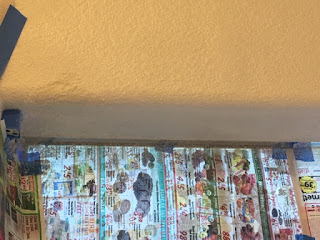 Just in case you haven't been watching hurricane Dorian ... it's moving North and heading right for Nick and Terry.  I'm keeping my fingers crossed it keeps going North, but then Georgia is right in it's path!!  This thing is so big it almost covers the entire state of Florida.  I think I would take the snake over the hurricane. 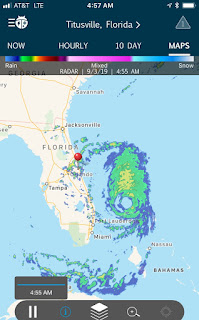 I hope everyone had a nice Labor Day, even if you were camped in a park with dozens of weekenders.  I spent most of it recovering from my near heart attack by quilting and looking for critters in my back yard ... in my shorts and cowboy boots, a sight you don't want to see.