Playing Mario Kart On The Freeway

Sometimes driving can be a challenge.  I rather LIKE challenges, but the ones presented in Bakersfield California were almost above my pay grade.  I've been heading out on Highway 58 for eight years.  That's eight years of driving through some of the worst construction zones in the country and it's STILL not finished.

Not that I'm complaining, because it certainly improves my skills.  It used to be just the section closest to Hwy 99.  Now it's the entire length almost up to the mountains.

I waited as long as I could, since I only had a short 2-1/2 hour drive.  Engine Guy started up at 6:30 and finally left at 7:05.  It was SO quiet!!  Immediately upon leaving and entering the freeway, I sat upright and began to pay attention.  The road shifted from lane to lane with those white barriers narrowing the lanes considerably.

Lucky for me, I decided to stay in the right hand lane.  All of a sudden, without warning, the highway split in two, the left lane going into a lane of it's own and me staying on the rumble strip side with concrete barriers on BOTH sides of me.  In the middle was the newest lane of concrete under construction.  It was like playing Mario Kart!!

I was very happily surprised when my turnoff ended up being in MY lane.  If you happened to get into the left lane and wanted to go right, you were out of luck, probably ending up by the ocean somewhere.  As if that wasn't enough, the entire rest of Hwy 99 through Bakersfield was ALSO under construction, with S curves and super narrow lanes.  WHEW!!!  I finally made it out of town.

Two hours later, I landed in beautiful downtown Hanford.  There was not a rig in sight.  Uh oh ... do I have the right date??  I double checked my calendar.  How nice, I had my choice of parking spaces. 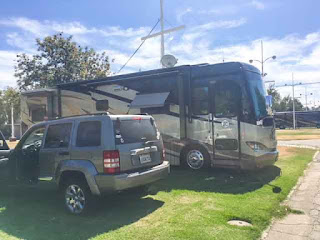 I spent the next 30 minutes in a battle of epic proportions with a big herd of yellowjackets.  They seem to love electric boxes here.  I grabbed a stick, poked the nest trying to knock it off the breaker, then ran like crazy as fast as I could.  Upon my return, I hit it again, this time to the ground as I raced away.  I watched out the window until they finally left so I could plug in.  Yay for air conditioning!!

In case you were wondering about that last picture of Jessie ... here's my couch condition.  Jessie has a hard time jumping up now, so she gets the spot without the cushion.  Cooper can't jump ... I mean what poodle can't jump ... so he gets the cushion as a launching pad and thereby doesn't hurt his back again.  What can I say, they are spoiled. 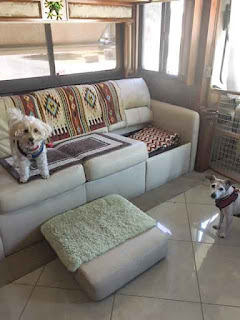 Friends Betty and Kurt Simon finally arrived ... my IN to the upper group of officers.  That's lucky for me because they invite me out to dinner with the group.  We went to Ryans Place.  Lookie here ... I was good and had a caesar salad with chicken.  Sorry this looks pretty unappetizing.  It was okay because I was looking forward to the FREE pie when you sign up to receive emails. 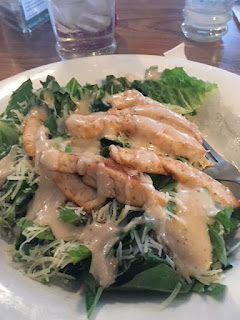 I chose pecan.  I chose badly.  I'm pretty sure it had been sitting on the counter for a few days.  To make it even worse, I forgot I signed up the year before (which never went through) and so their computer wouldn't give me my FREE piece.  Ten minutes later, I'm still waiting for the gal to figure it out, when another lady came by and said the pecan pie is NEVER free.

Well rats ... no problem.  I was happy to pay for it rather than keep everyone standing there.  FYI ... don't order the pecan pie.

No meetings today, so I don't know what I'll do.  I did discover I'm on the "main dish" menu instead of the "dessert" menu I purchased supplies for.  Since I distinctly remember running OUT of main dish food last year, I suppose I should find some alternative to cherry crisp!!!