There's a very fine line between words in this house as I walk the corral fence tops.  Competent ... incompetent.  Flexible ... inflexible.  Edible .. Inedible.  Every day I walk those lines, most times falling off the fencepost to the ground below.  Yesterday was a fall day.

Try as I might to be the Parrot Chef of the year, Jonathan continues to put me in my place.  It's hard to get birds to eat, let alone eat what they SHOULD to be healthy.  Every morning I'm put to the test.  Things like bananas and banana bread have been left in the bowl each morning for a week.  His bird biscuits, specially made to contain something that resembles vitamins, remain untouched.

Yup ... there's carrots, apples, peanuts and even spinach in this bowl, but like a good 3 year old going on 46, he has refused everything but the sunflower seeds.  I tried corn on the cob, which he used to love.  Nope ... not having it.  THUNK!!  That's me falling off the fence and hitting the rocky ground. 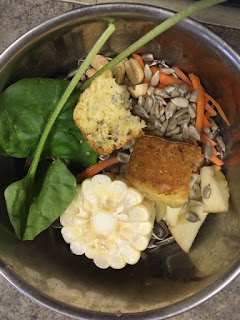 Our sewing confab always puts me in a good mood.  There's nothing like being around friends who laugh with you and make you forget your Chef shortcomings.  This was supposed to be the best red velvet cake ever.

It all went well until the last of the mixing when the batter got so thick I could barely whack it off the spatula into the pan.  Unfortunately, I missed the part about this being baked in a 7" pan.  This is a NINE inch pan, with the batter barely half an inch thick by the time I spread it out.  I was teetering about midway between the fenceposts on a cracked wobbly board.

Having tasted the frosting recipe previously, made with fake sugar, I was hopeful it would pass the test.  How wonderful it would be to have an ooey gooey dessert without the carbs and sugar?

Not today .... no not today as I hit the ground with a crash.  It actually came out of the oven pretty good, if you were looking for brownies.  I was looking for cake.  Okay ... so we'll just have red velvet brownies instead.

We ate about half of it and they all were sweet to say it tasted great.  They lied.  It was pretty much tasteless.  The texture wasn't bad, but my brain locked up with every bite thinking I was going to get a yummy taste of lovely thick sweet frosting.  It didn't happen. 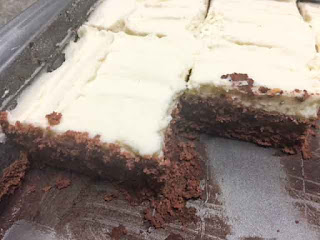 Having already foreseen the outcome (it happens so often) I had whipped up my favorite cherry pie crisp smothered in brown sugar, oats and nuts.  That's what I'm talking about .... I walked the top of that fine line of a fence like a champ!!


Yes, I did try the brownies again after dinner, but they didn't get any better.  Sorry folks, no BEST EVER recipe this time.  I'm sure even Cooper here wouldn't have eaten it.  Cooper is a smart cookie.  I think I mentioned before, he spends most of his time laying on the AC vent. 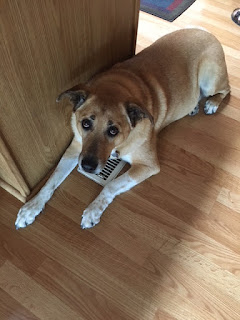 As I left the house after conversing about all things long arm quilting, I spotted this tree with beautiful flowers.  If I can figure out what it is, maybe I'll find a spot for one around my house. 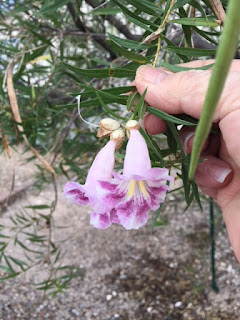 I was so tired by the time I went to bed that I forgot to bring in the hummingbird feeders.  This morning they are both completely empty as the bats have discovered the buffet line.  At least hummingbird nectar is something I can cook that turns out right every time!!  In the meantime, I'm packing.  Time is getting short.