One of my all time favorite movies ..... Hook.  No one played Peter Pan better than Robin Williams, or Captain Hook better than Dustin Hoffman.  I've probably watched it twenty times.  WAY too many.  So much so that the words Hook Hook Hook travel through my brain quite often.  Yesterday, I think Hook himself paid me a visit.

Here's my boo boo for the day.  The moral of the story is never wear shorts when tree pruning. 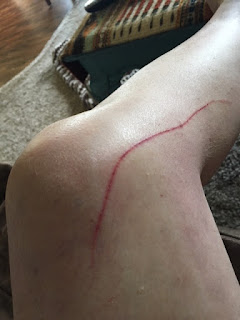 When it's 85-90 degrees outside however, you surely don't want levis.  I've no idea what this tree is, but it has thousands of one inch long daggers throughout.  It's a man killer.  It's also huge, putting out 20 foot long branches.   I've considered taking it out completely, but it does provide shade for critters and it is (or at least was) very nice looking, as long as you don't get too close. 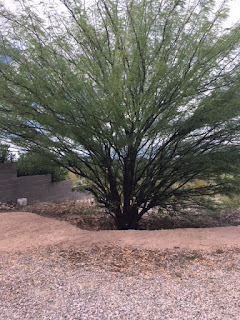 That's when it whips out it long branches and tries to strike you down!!  Mr. Chance was working at a neighbor's house and needed a place to dump a few backhoe buckets of dirt.  PERFECT for me.  I could use some fill around the tree to level things out.

However, there really wasn't room to do that unless quite a few tree limbs disappeared.  Just when I thought I had it made, meaning I didn't get stuck or pricked with a needle, one limb lashed out and scarred me for life.  OUCH!!  Honestly, it barely grazed my leg, but those spines are so sharp, it sliced through like Hook's hook, in a nice S curve, causing blood to flow. 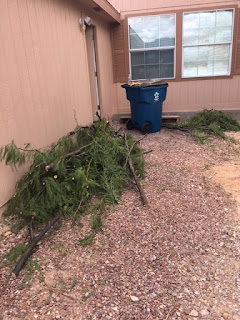 This morning, in spite of antibiotic cream, it's quite swollen and very sore.  Must be poison in the tree.  Not really, but it's mighty uncomfortable.  A small price to pay for the much enlarged parking spot and level walkway to the gate.  No more tipping sideways when I drag out the lawnmower and  go through that gate.  ALL thanks to Mr. Chance. 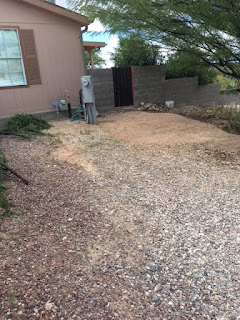 Now all I have to do is cut up those remaining branches into bite sized pieces and toss them in the garbage can .... next time ...  because it's full to the brim at the moment.  Those two inch and larger branches, taken down by my handy dandy little hand saw, will be hauled off.

In the meantime, I'm sure HOOK is laughing at me.  Next time I'll wear levis.  Aspirin is on my breakfast menu.

Lastly, remember 9/11.  We don't want anything like that to happen again.