Another Day, Another RV Park

Here's the biggest surprise of the day.  In spite of having my Jeep unhooked so I could purchase a gift card for the Ladies Tea, I did NOT go to the fabric store in Indio.  It's one of my all time favorites too.  If I'm thinking of a long arm quilting machine, I need to start saving pennies.

Try as I might however I could NOT pass up the lemon loaf at Starbucks.  The weirdest thing happened though ... I put it in my purse and completely forgot about it.  I discovered it yesterday when reaching for my wallet.  You have to give it up for this yummy moist product ... it was still just as tasty as if I'd eaten it the first day.  It's called CHEATING on my diet because it's got flour, but boy was it GOOD!! 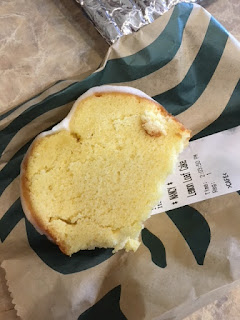 I have such fond memories of the Morongo Casino every time I pass by.  They have a GREAT buffet with plenty of parking and a driver to take you right to the front door.  It's also the site of the infamous Jonathan crash of 2013.  You might remember his cage fell on the floor, breaking it to pieces, whereupon he walked the doggie gauntlet all the way to the front and crawled up on the doggie gate, unscathed and uneaten by Jessie.  I've hated round-de-rounds ever since! 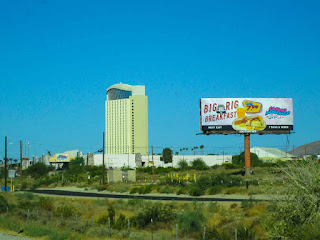 The wind turbines have exploded with more and more babies.  Honestly, every time I'm here there are at least a hundred more covering the landscape. 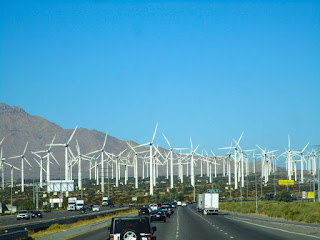 Finally out of freeway land, I headed north on 395, which is now a nice smooth roadway as it tops the hill and heads down into Kramer Junction, or as I call it, Three Corners. 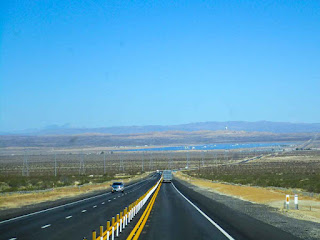 After five long grueling hours of driving, I landed in the middle of beautiful Orange Grove RV Park.  Yes it's pricey at $50 a night, but convenient, VERY roomy and full of free oranges in the winter. 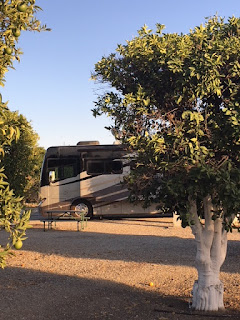 Right now, the trees are covered with big green balls, soon to turn orange and juicy for our eating pleasure.  There's a swimming pool if you want as well as a nice office to sit with your computer.  You can even snack on FREE donuts and coffee in the mornings. 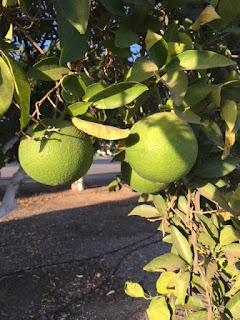 I set up just in time to watch the fun as several rigs came in.  Even though the temperatures are not all that hot, the place is a ghost town.  A big rig came in way too fast and landed two doors down.  He completely ignored the waving arms of his wife trying to park him, getting out and looking three times.

Thirty minutes later he was basically set up, with the engine running the entire time.  At long last, with even his awnings out, he turned off the ignition.  Oh the fuel he could save.

The fifth wheel across from me has had a jet engine running on top of his rig from the moment he arrived.  How can they sleep?  It's a fabulous 60 degrees this morning, so I don't know if it's the AC or the heat.  He's also got every light on the outside burning brightly, even though he's under a streetlight with a million lumens.  People are funny!!

We all crashed to the sounds of train whistles, at least for a couple of hours.  Maybe I'll sneak in a little nap this afternoon in Hanford. 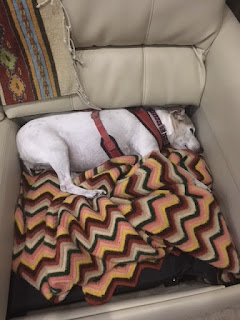 I've not far to go, so am not in a hurry.  I can however, SMELL the ice cream and hear it calling my name.  Superior Dairy ..... you WANT some ICE CREAM!!  You are NOT sleepy ... head down here quickly and get your FIVE scoops that only count as ONE!!!