I have to say, there are an abundance of delightful critters in the desert.  More than you can imagine.  I've probably only seen a snippet of those hanging out around here.  Honestly, I don't want to know just HOW many there are.

I guess they come with the rain.  Even though we haven't received that much monsoon rain here, it has fallen all around us.  The wildflowers are happy campers, even these growing up through a cattle guard. 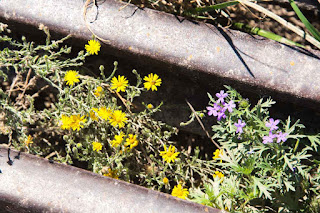 There are dinosauric (is that a word?)  lizards everywhere, like this guy with amazing scales doing push-ups in my back yard.  I really don't see them that often around the house.  Too bad because maybe they would eat the thousands of moths that scream through the sliding door at breakneck speed every time I let the dogs out.  These guys are really fun to watch. 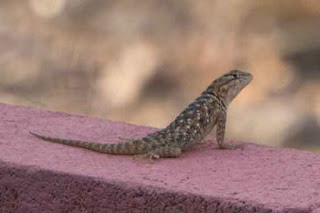 Patty and I made a quick stop at the biggest cactus nursery I've ever seen last week.  They also promote kitty adoption.  These older guys hang out in the gift shop getting lots of pets and love. 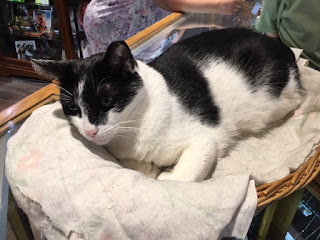 They are pretty much past their prime, but would make great couch ornaments.  Unfortunately Jessie would think they were just for her chasing pleasure. 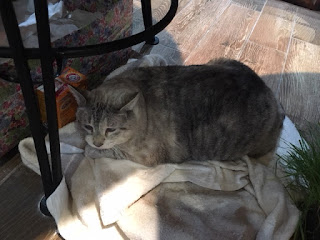 With all the rain, many of their plants were blooming, making it very hard to keep my wallet in my pocket. 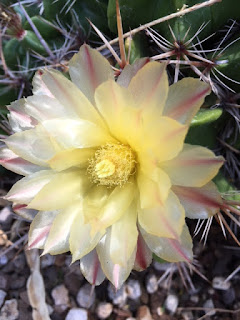 I haven't been able to keep count of the 30 or so quail that come to drink every morning and evening at my water station.  Apparently I have two resident roadrunners also.  You can't see this guy's tail for the bushes. 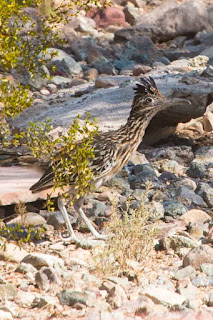 They definitely are fun to watch however.  These two are smaller, so I'm guessing maybe they are young-uns.  I could sit outside and watch them all day long. 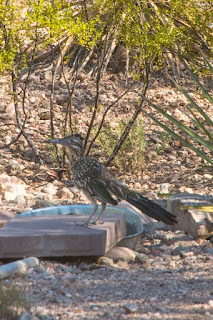 Except for these guys!  Mesquite bugs about two inches long.  They LOVE the mesquite trees ... and they FLY!!!  Upon landing however they aren't very graceful.  Most tip over, and once on their backs, like us old folks, can't get up!  I saved a couple on my patio by turning them right side up, but come on buddies ... you need to figure that out.

Luckily my mesquite tree is some weird variety that they don't care for that much.  The Chance house has dozens of these babies under THEIR tree. 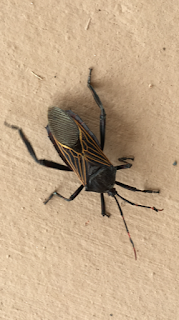 Sporadic rain has caused many of the barrel cactus to bloom, least that's what I think they are.  As you drive around, you can see bits of red everywhere.  Amazingly ... you're not going to believe this ... it's 70 degrees right now with a high of 82 today.  I think my ski parka needs to come out of mothballs.  I'm sure if I went outside, I'd freeze!! 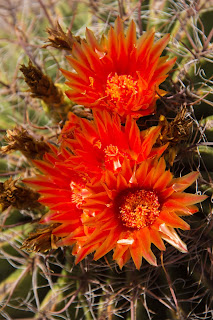 These guys appear to be pretty prolific this year too.  I showed you one large guy previously ... then I found three babies (or maybe smaller males) hanging out on my screen.  These are the good guys, eating flies and other awful critters.  They can hang out any time. 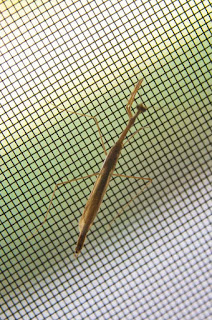 Here's an unusual one.  It looks like a honey bee, but it's wings are two-toned.  Half brown, half clear.  I didn't want to get any closer, you can understand why.  They swarm my hummingbird feeders in the late afternoon when it's warm, looking for food.  They are not the only ones.

Every night now I have to bring the feeders inside.  The bats have found their snack bar.  They do fly-bys, swat the feeder with their wings and lap up the syrup as it drips out.  They can empty a feeder three times as fast as 20 hummers. 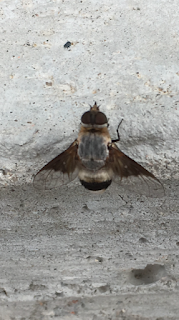 And there's even MORE ... like the tarantula I've been playing with by the back door.  I drop stuff down his hole, he pushes it out.  He appears to be tired of the game, since now he has covered the entire top of the hole in webs.  If he'll eat the scorpions, I'll leave him alone.  At least some of the desert delights can be entertaining!!