Interestingly enough, this is Cochise County, in which lies Cochise Stronghold (an easy drive in a two wheel car), and Cochise Cemetery, along with the town of Cochise.  So when I saw this sign as I drove by, I immediately hit the brakes and made a U-turn.

This is a fairly well kept BIG cemetery, probably the only one around for miles. 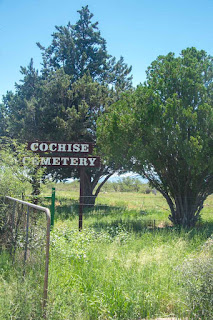 It even has it's own water supply with working windmill pump.  We had these all over our California ranch.  It was the only way to get water to the cattle, since at the time, there was no electricity.  I'm not really sure WHY there is water here, since it isn't used for landscaping at all. 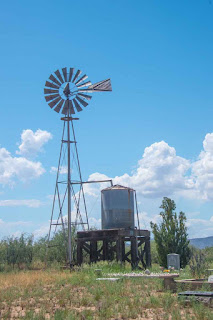 This was probably the most interesting headstone.  This my RV friends is a World War I Veteran.  This is PFC Ray Amick, II Balloon Company Air Service World War I.  Can you just imagine what his life was like?  Born in 1883, he passed in 1961.  What a great hero! 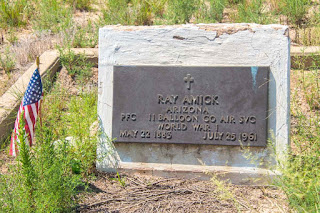 Here lies Elizabeth Moore, born 1852, passed in 1917.  She must have been a real pioneer.  Originally her headstone only had her initials.  It appears this might have been added in 2007.  In fact, many of these headstones have been replaced with newer ones. 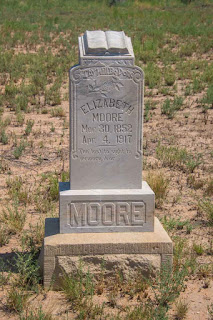 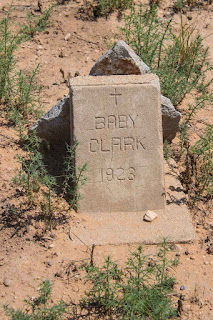 Back out on the road headed home, I spotted the sign to the town of Cochise too late to stop.  It's now on my MUST SEE list.  In the 1880's, the Southern Pacific Railroad came through here.  A stop was needed for coal and water for the steam engine, so the town grew up around the railroad.

Originally a bustling old west city of 3,000, it now boasts 50 residents.  There's some interesting history here I definitely want to check out.  Hint ... it involves Doc Holiday!!  Yahoo!  This is a picture of the old general store.  I've no idea if it's still standing, but I'm going to find out. 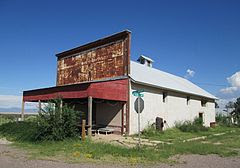 Since I was so close as I headed back to Hwy 10, I thought I might as well check out Apple Annies.  Not that all that sugar is on my diet list of edible items, but they seem to be famous for their apple pies.  Wasn't I surprised to find such a tiny building for it's big reputation.

The walls were lined with apple jams and jellies, along with apple salsa, apple syrup ... you get the picture.  I'm not sure how apples grow in this area, but there are many orchards around the Dragoon hills. 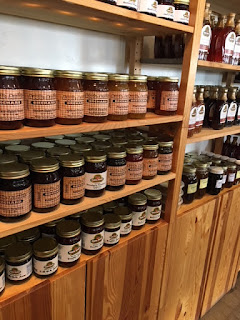 The Christmas tree is apparently up for every holiday, this being Halloween/Thanksgiving, even though it was still August. 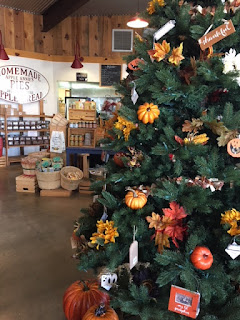 They have a small lunch counter and seating area for your apple pie enjoyment.  They also had whole pies, with a choice of crumble crust or regular crust.  I chose the crumble.  I figured to pawn off most of this on the Chance Household.  Shhhhh don't tell them.

Miss Patty and I had a piece with a little ice cream.  It was good, but nothing to write home to Mom about.  Surprisingly, it wasn't as sweet as the apple pie I'm used to and rather dry.  It had good flavor, but not enough to prompt me to return to Wilcox for another one.  Obviously, my plan worked, as this is all I had left. 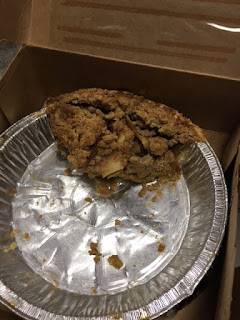 So there you have it.  Another day, another adventure.  I can't wait to return to Cochise before I have to start packing up.  Time flies when you're investigating the local history.