Sometimes You Have To Be Brave

I don't know what in the world I was thinking when I signed up for this shooting class.  It must have been sleep deprivation.  If you want adventure, sometimes you just have to be brave.

I've done some crazy things in my life, like jumping off a 60 foot tower in the jungles of Costa Rica to swing like Tarzan, but I don't think I've ever shook this bad or been this nervous before.  Obviously, that's not me in the picture.  I would NEVER wear all black in mid summer.  True, you'd never catch me in those short shorts either and there's no tattoos anywhere on this body.

We went through a four hour safety class first, with things like what would you do if you walked into a 7-11, and while standing in line, the guy ahead of you drew a weapon, pointed it at the cashier and said give me your money or you're dead!!  My response was to silently back up,  creep outside and call 911.

At any rate, it turned out to be rather exciting as we moved left and right, ducked here and there and fired at targets from as close as three feet to as far as thirty feet away.  There was a lot of thinking involved, about whether to shoot or not, not to mention listening to instructions.  I kept telling myself to be brave ... I could do this ..... and I did with pretty good results.  It was all luck!!

On the other hand, there were several others in the class who didn't fare so well.  The guy who wore sweatpants had a hard time keeping them up since his gun and holster were so heavy.  Yes, really.   One very old gentleman couldn't seem to follow instructions at all and pointed his gun at the Range Instructor.  Yikes!!  That was nothing compared to the lady who dropped her gun on the concrete, making all of us duck for cover!!  You had to be brave to be in THIS class.

It was fun, and I'm now positive there's no plaque sitting around in my arteries and veins.  My heart was pumping like crazy the entire time.  It was a fun night and rather past my bedtime when I got home at 11:00 pm.  I just might have to do that again! 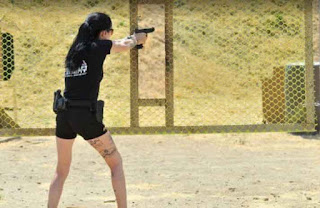 You also have to be brave to eat my food.  Even "I" have to be brave in this respect, fairly often.  I had some leftover salmon, so decided to dig out the old bbq and grill up a little for salmon tacos.  I had a heck of a time getting the propane container attached.   It was a new variety with some kind of cap with a green dot I'd never seen before.  It just didn't want to come off the bottle.

When I did finally get things going, I think I had it turned up a little too high.  The skin on the bottom was pretty dark, actually akin to black.  No problem, I'm only eating the top part. 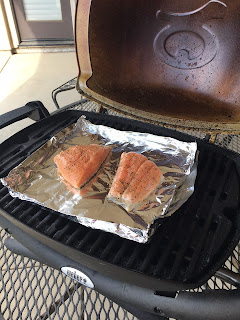 My first piece of advice concerns the tortillas.  Flour torts and salmon do not mix well.  They should have been corn tortillas.  Since I had no salsa or taco sauce, I substituted apricot jam.  That was my second mistake.  Thirdly, olives don't exactly go with salmon.  So there you have it ... terrible tacos!!  I was lucky to get one down before cannibalizing the second for the salmon. 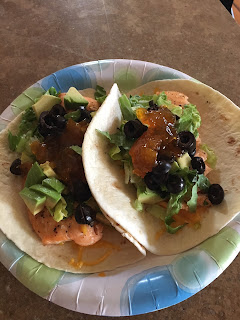 Since I was on a roll, I climbed atop the rig to clean off the white gunk.  Seems there's always an adventure going on around here.  I'm now half an inch short of skin, but I'll relay that brave report tomorrow!!